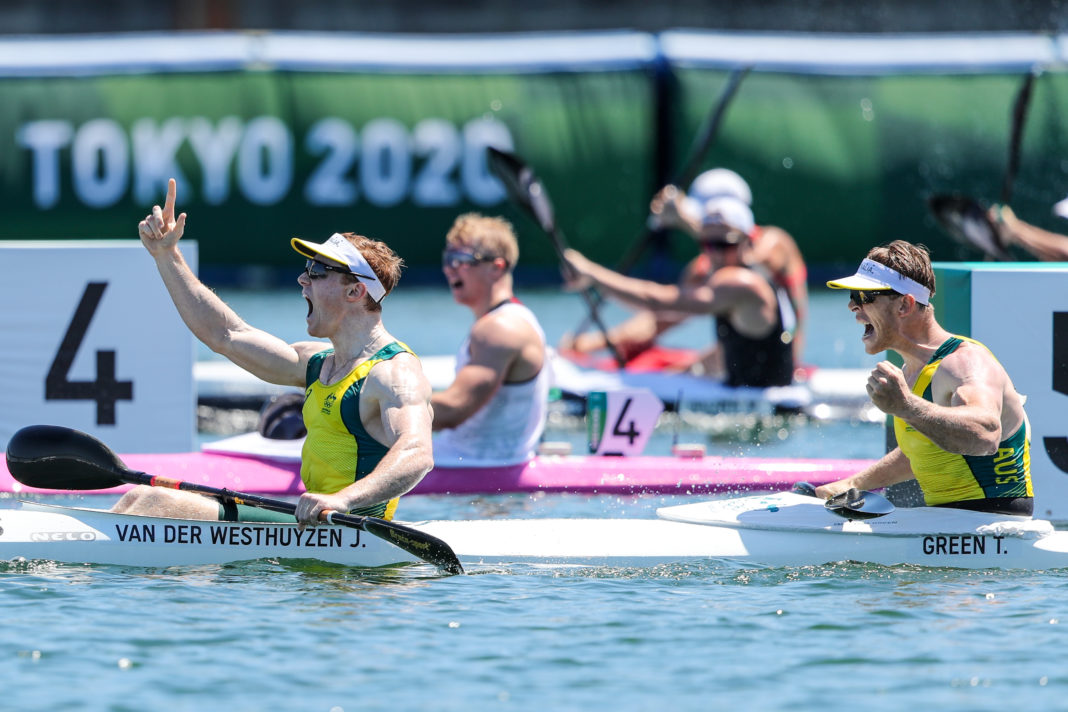 Tokyo Olympic gold medalists Tom Green and Jean van der Westhuyzen have been named as the 2021 Team of the Year as part of Paddle Australia’s virtual awards celebrations.

Green and van der Westhuyzen made Australian team history when they made their Olympic debut in Tokyo , becoming the first Australians to win Olympic gold in the men’s K2 1000m event.

To win gold at their first international event as a team, that was on the biggest sporting stage, the Olympic Games,  is a feat that is not lost on Green.

“To win an Olympic gold medal at our debut event internationally…. it was one of those things where we knew we were going well, but it was a surprise to go that well,” Green said.

“We did so much hard work in the lead up to that moment – there were times where we didn’t think we were as good as we were.

“Having the lack of pressure from the international field probably worked to our benefit.

“It was so good to see that’s what we’ve done already, and I’m looking forward to seeing what we can do from here on out,” said Green.

For van der Westhuyzen, it was special to share that moment with not only his team mate, but also good friend.

“We have a good time together out on the water, and I think what makes that even better is we’re good mates, and we have a good friendship outside of kayaking,” van der Westhuyzen said.

“Tom and I have been dreaming about that moment since we first started paddling – it’s the ultimate to achieve Olympic gold.

“To go and achieve that at our first Games, and our first international outing [as a team], is so special. It’s a memory I think we both will never forget,” he said.

But for Green, the Team of the Year award was not just recognition for him and his paddling partner, but the broader team that helped them to achieve the ultimate goal.

“Winning Team of the Year is one of those achievements where it is so good to have, because for the coaches and support staff from Paddle Australia it recognises all the hard work they’ve put in too,” Green said.

“Everyone behind the scenes puts in so much work to get us to where we are, and they are the ones that don’t get to be on the podium with us.

“And to really put the spotlight on the Paddle Australia support staff for helping us to achieve that,” he said.