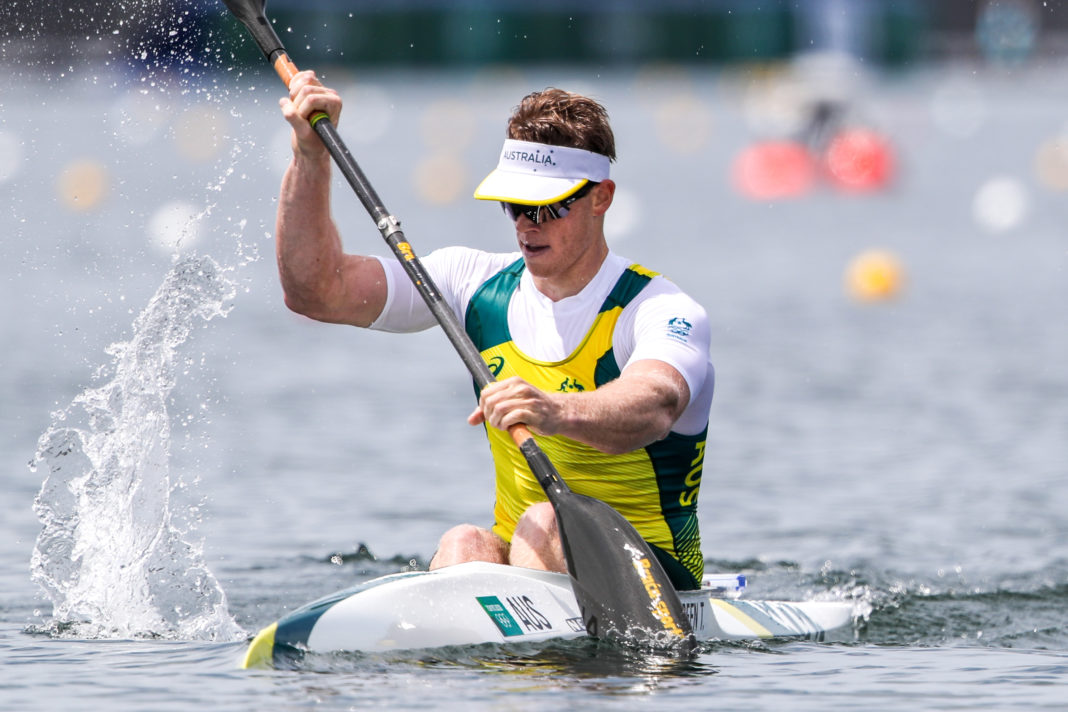 Four Australian boats were in action at Sea Forest Waterway today, on day one of the 2020 Tokyo Olympics Canoe Sprint competition with all boats progressing through to Tuesday’s semi-finals.

Olympic debutants Tom Green and Jean van der Westhuyzen were first on the course – Green finishing second in his heat and auto-qualifying for Tuesday’s semi-finals, van der Westhuyzen making his way through the quarterfinals repechage to claim his own semi-final berth.

Green was pleased with his first performance at the Games, and enjoyed racing against international competitors again with the team last competing on the international stage at the World Championships in 2019.

“That was my goal, to come out here today and push up to try and get straight through to the semi-final, so I’m very happy with that,” Green said.

“It’s just been so long between international regattas, I haven’t been able to test myself against international competition in almost two years.

Green finished the heat in a time of 3:39.492 and second behind Olympic silver medallist and four-time world champion Josef Dostal (CZE).

With Green earning a ‘rest’ from the quarterfinals, he kept a keen eye on fellow Aussie and K2 teammate van der Westhuyzen, who qualified for Tuesday’s semi with a win in the quarterfinal.

“Jean has played a big role in the preparation.  We work off each other really well, and he helps push me in training and vice versa,” Green said.

“I’ll still be keeping an eye on him because he is my competitor and I’m honoured to be able to race against him.

Westhuyzen impressed in the quarterfinal, winning ahead of Frenchman and dual Olympian Etienne Hubert in a time of 3:46.104.

“It was a tough race in the head wind, but I was happy to stick to the race plan and just to listen to our coaches Jimmy (Owens) and Smithy (David Smith) and execute,” van der Westhuyzen said after the quarterfinal.

“I was surprisingly relaxed, I was way more nervous the night before and at brekkie this morning but getting on the course I felt quite relaxed,” Westhuyzen added about racing at his first Olympic Games.

In the women’s K2 500m, both Australian boats qualified for the semi-finals via the quarterfinals after Alyssa Bull/Alyce Wood and Jaime Roberts/Jo Brigden-Jones posted a third and fifth place in their heats respectively.

In the quarterfinals, both Australian boats were lining up against each other in the same race with Alyssa Bull/Alyce Wood qualifying for Tuesday’s semi-final in second, while Jaime Roberts/Jo Brigden-Jones qualified in fourth.

Like Green, Roberts was thrilled to be back competing in an international regatta and racing at her first Olympic Games.

“That was our first race since World Championships, so it’s been a while since we’ve seen our competitors,” Roberts said.

“It’s my first Olympics, and now two races done, and I couldn’t be happier to be through to the semi-final,” she said.

Having represented Australia at the London 2012 Olympic Games, and back for her second Olympic Games, Brigden-Jones was proud to pull on the green and gold again.

“It was good to go down the course today – our plan looking at the draw was just to be smart,” Brigden-Jones said.

“We went out hard in our heat for the first 300m, and then Jaime had a sneaky look around to see where we were at.

“We decided to back off a little, and start the preparation for the quarterfinal,” she said.

Dual Olympians Alyssa Bull and Alyce Wood were also happy with their performance in the first two races in over two years and finishing second in the quarterfinal in a time of 1:47.057.

“We lined up in that heat and there were definitely a few jitters on that start line and we didn’t put our best race forward by all means,” Wood said.

“But it was nice for us to get out there again in the quarterfinal and put a really nice race forward which gives us confidence before tomorrow’s semi,” Wood added.

“We are very happy with the quarterfinal and are looking forward to tomorrow.  We tend to get better the more races we do, so we are very excited,” Alyssa Bull agreed.

All four Australian boats will return to Sea Forest Waterway tomorrow for the MK1 1000m and WK2 500m semi-finals, before the finals later in the afternoon.