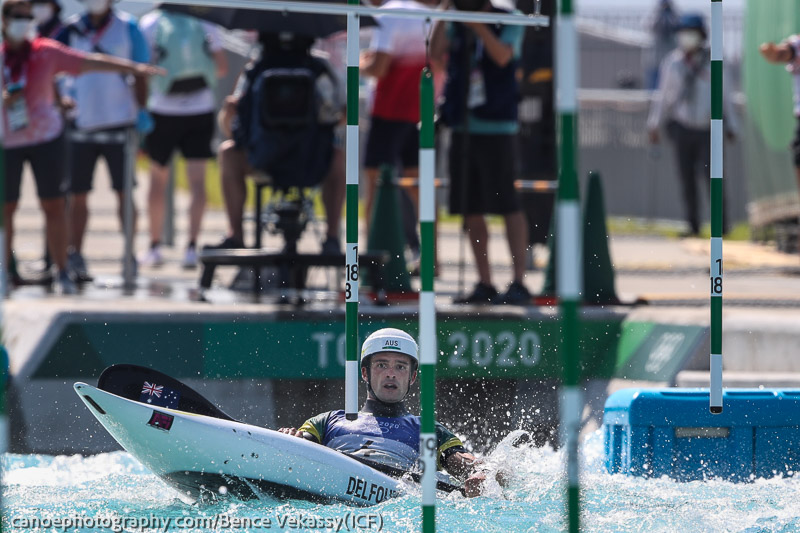 Lucien Delfour has finished eighth in his first Olympic final in the men’s K1 event at Kasai Canoe Slalom Centre today, after missing the top-10 final at the Rio Olympic Games.

Showing that he can match it with the world’s best, Delfour recorded a time of 97.52 seconds in the semi-final to progress through to the final in sixth place.  He went on to finish the top-10 final in a time of 102.33 seconds, including a two second penalty for a gate touch.

The last day of competition for the dual Olympian rounded out what has been an impressive week for the Australian canoe slalom team, with all three paddlers making their respective finals, and Jessica Fox winning gold in the women’s C1 and bronze in the women’s K1.

While it was not the run he had hoped for, Delfour was proud to make his first Olympic final.

“That wasn’t the run of my life, but I tried hard.  I tried to enjoy it, that short time on the water,” Delfour said.

“Technically and physically it was pretty hard, I wish I could’ve paddled better.

“But just being here, racing my first Olympic final – it is something special,” he said.

Having felt like he was on the water with training partner Jessica Fox and fellow Western Sydney Whitewater Club mate yesterday as she won gold, Delfour used it as motivation for his own performance.

“It really was a relief – we weren’t even racing, just watching, and it was hard.  We wanted Jess to win so bad,” Delfour said.

“After she crossed the finish line it was such a massive relief.  I was so happy for her, she deserved it so much. It was inspiring for sure,” he said.

Looking to the future, and the Paris 2024 Olympics, Delfour has hopes of representing his country for a third time.

“That’s the plan, it’s only three years away.  We actually went to Paris just before coming here, and I enjoyed it.  I’d love to race in Paris 2024, there’s no doubt they’ll put on a great show,” French-born Delfour said.

“I’m actually going back to France to see my family now, and I’m really looking forward to spend some time with them.”

While Australia’s canoe slalom paddlers will leave Tokyo on Saturday, the canoe sprint team will move into the Olympic Village to start their Tokyo 2020 campaign at Seaforrest Waterway from Monday (2 July 2021).