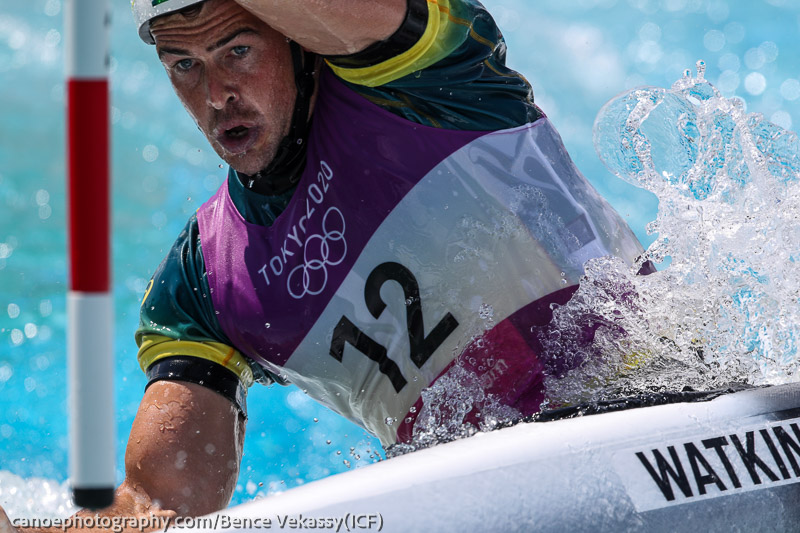 Racing resume at Kasai Canoe Slalom Centre on Monday, 26 July 2021 with the semi-finals and finals in the men’s canoe on the schedule.

Australia’s Games debutant Dan Watkins qualified for his first Olympic semi-final following a tenth place in Sunday’s qualifying and is looking forward to put it all together in the semi final to get into his first Olympic final.

15 canoeists have qualified for the semi-finals with the top ten to progress through to the final round, which is held just over an hour after the semi.

The 25-year old Tasmanian had a bit of a shocker in his first Olympic race on Sunday, but followed up with a solid second run and is looking to build on that on Monday.

“I needed to get the qualifying out of the way and today is going to be super fun and the course looks better I think,” Watkins said about the course design which changes from qualifying to the semi-finals and finals.

“My world ranking does not reflect my potential.  I post some really fast runs, it just takes one run to put it all together and be clean and anything can happen here,” Watkins added about the goals ahead.

Australia’s slalom paddlers have been enjoying the Tokyo 2020 whitewater course at Kasai Canoe Slalom Centre, despite the challenging conditions.

“I think the course is really challenging.  It’s been changed a lot since it first opened.  The whole course is very continuous, one move is not too tricky, but the whole course is and you don’t get any rest.  The heat definitely adds a physical factor and the water is really hot as well.”

Team mate Jessica Fox, who qualified for Tuesday’s semi-final in the women’s K1 as the fastest athlete in the qualifying on Sunday, will have the day off, but will make sure to cheer on Watkins together with kayaker Lucien Delfour, who will join the action on Wednesday.