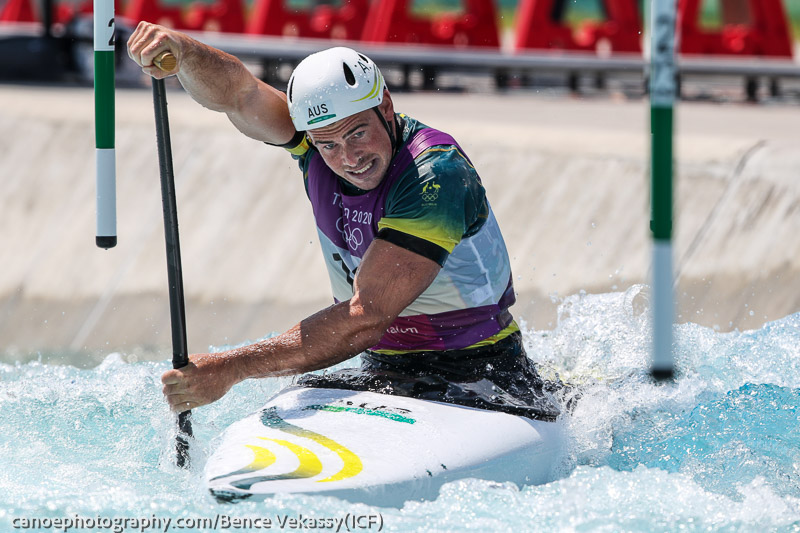 Jess Fox has shown why she is the world’s greatest canoe slalom paddler of all time, qualifying as the fastest athlete on the first day of the Tokyo 2020 Canoe Slalom competition in the women’s kayak heats at Kasai Canoe Slalom Centre.  Olympic Games debutant Dan Watkins added another semi-final spot for Australia in the men’s canoe.

The dual Olympic medallist in the K1 and three-time K1 World Champion took home the overall win in the qualifying after finishing second in the first and winning the second run.

Fox’s first run was faultless, crossing the line as the only female to complete run 1 without incurring a time penalty, but finishing +2.15 seconds behind Germany’s world number 3 Ricarda Funk in second.

It was her second run which saw her cross the finish line in the fastest time of 98.46 seconds, once again showing her class by putting down a time that was faster than the second fastest man in run two of the men’s C1 qualifying (98.82) and +3.10 seconds ahead of Funk.

“It was one of those runs that felt flowing and smooth and I think on this course that can be quite challenging with all the stoppers and features that can be quite hard physically, so it was a good run,” Fox said.

“It is a physical course and I was tired at the end.  Especially in this weather and this heat my heart rate soars.  It is a really physically demanding race with the weather conditions and the water being so warm and it’s just about taking it step by step and run by run,” Fox added about the conditions.

While she was not really celebrating when crossing the finish line, there were lots of smiles coming off the water.

“When I crossed the finish line, I was squinting to see the time and I don’t know why it took me so long to react.  I should have been waving to everyone at home and I apologise for that,” Fox laughed.  She also showed that there was still room for improvement after already stopping to paddle before the finish line.

“I didn’t quite realise that I was under, had gone into the lead and had such a good time and that was why I had stopped paddling because I didn’t need to sprint to the finish,” Fox explained.

As one of the few women doubling up in both the women’s K1 and C1 events, the 27-year will get to enjoy a day off on Monday, before heading into Tuesday’s K1 semi-finals and final, followed by Wednesday’s heats in the women’s canoe.

“I think it is lucky and especially with the double event it is great to have that day off.  It will allow us time to recover, analyse the course, watch the boys and come back on Tuesday refreshed and ready.”

The 25-year-old’s first run did not go to plan, incurring 54 seconds in time penalties after two gate touches (gate 15 and 24) and a missed gate midway through the course, which saw him drop down to 16th place.

But he put it all on the line in his second run, looking more relaxed from the outset and putting in an almost clean run, with only a two seconds penalty for one gate touch.

Crossing the line in a time of 103.07 and eight place, he qualified for the semi finals in overall 10th place.

Although disappointed with his first run, Watkins was happy to have a redeemed performance in the second.

“The first one was a bit of a shocker, I think I was just so nervous – first time at the Games and it has been so long since we were last at a start line, apart from the recent world cups,” Watkins said.

“I just had to blow out the cobwebs on the first run and in the second run I felt so settled.

“It was all easy really, it wasn’t reinventing the wheel and I knew I was doing enough – I just kept it under control,” he said.

Looking ahead to the semi finals and a new course design, Watkins is excited to get back in the boat tomorrow.

“Every run is like a race, but this still isn’t the race – I had to get this out of the way, and then reset. The semi final is going to be super fun and the course looks better, I think,” Watkins said.