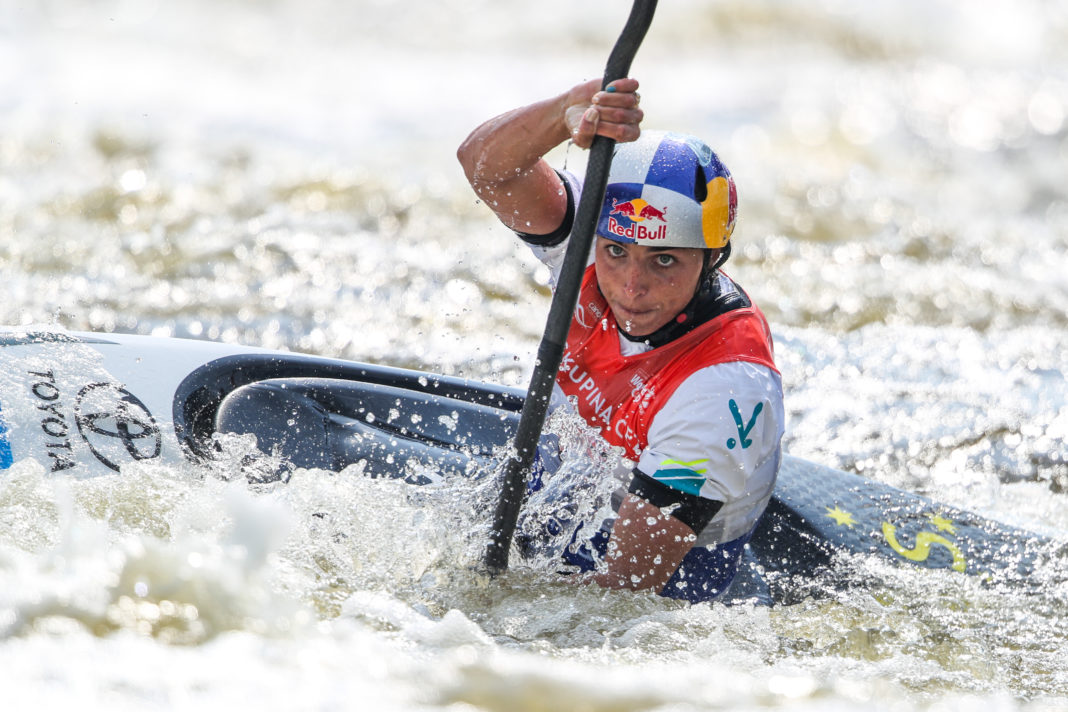 Saturday’s podium spot was the first ICF medal for the world’s most successful canoe slalom paddler since the ICF Canoe Slalom World Championships in September 2019 and marked the successful return to racing for Jess Fox following a COVID-19 disrupted 2020-21 season.

The medal in the women’s K1 capped off a strong weekend of kayak racing for the 27-year old, who celebrated her birthday on Friday with a win in the heat. Fox followed-up with a third place in the semis on Saturday morning, before the three time K1 world champion and 2019 overall World Cup winner raced down the Prague course in a fast raw time of 98.82 seconds. But two gate touches cost her four seconds in penalties and ultimately robbed her of gold. 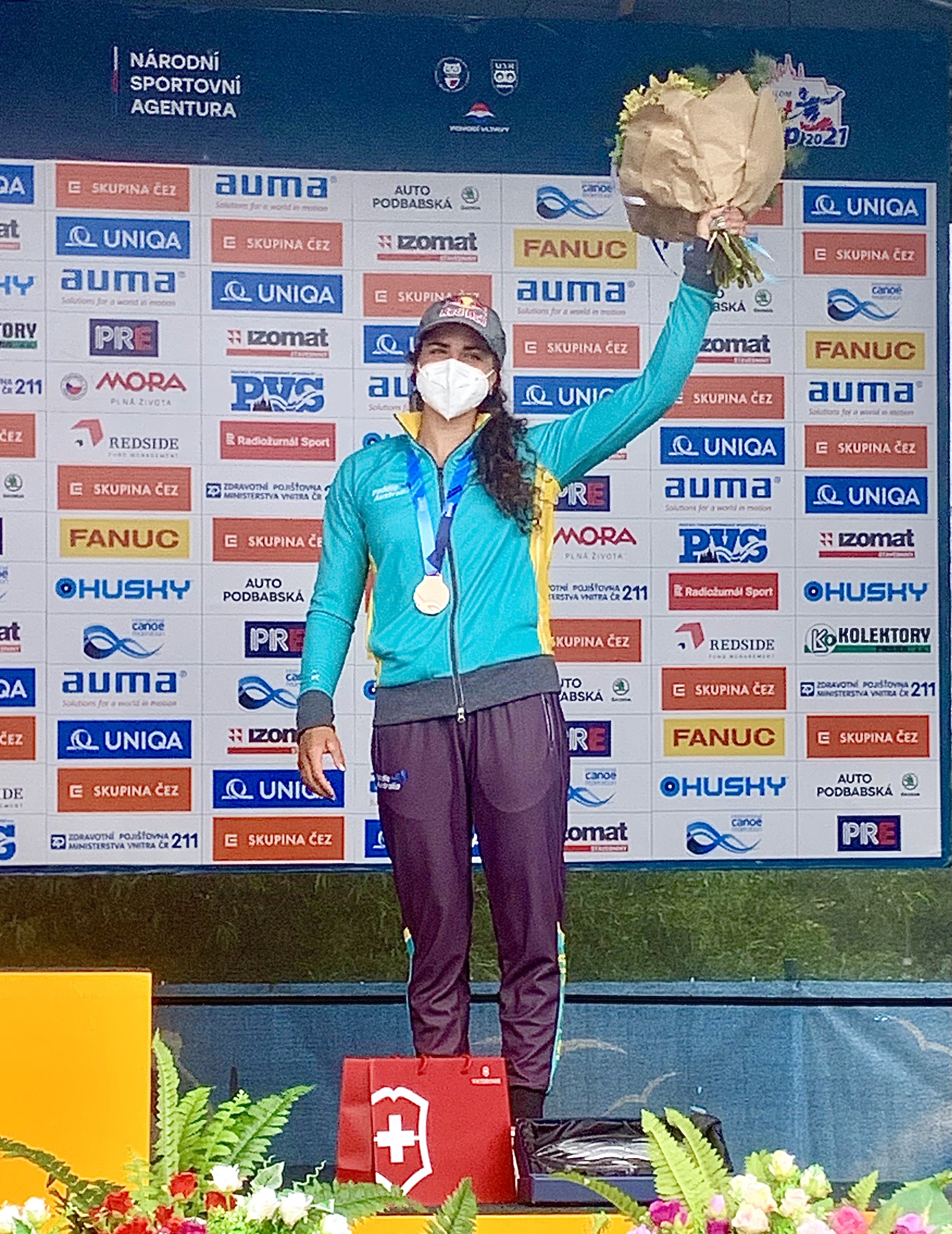 Fox’s final time of 102.82 saw her drop down to third place, behind second placed Natalia Pacierpnik from Poland and 2.24 seconds behind winner Klaudia Zwolinska, also Poland. Despite the penalties, Fox was happy with her performance.

“It was great to be back here and go through those processes again, getting to the semi, getting into the final. The course was challenging today, the conditions are challenging with the wind and low poles, so I’m really happy to get a medal. It was not the perfect run, but I’m happy to see I’ve got the speed and I just need to tidy up the touches. It’s the C1 tomorrow (Sunday), we’ll analyse today’s racing and I think there will be a few different strategies for the C1.”

Fox qualified for Sunday’s women’s C1 semi-final with a second place in the heats on Friday and will be joined at the start line by her sister Noemie Fox, who also progressed straight through to the semis after finishing ninth.

Prague is the first time since September 2019 that Australia’s Olympic Team canoe slalom paddlers have been able to head overseas and they have been relishing the opportunity to once again take on the world and gauge where they are at with the Tokyo Games only a few weeks away.

“It’s hard to know where you are at until you have a crack. I’m really pleased with the training I put in to get here and I think there were some really positive things to come out of this race. Some really good speed and really good technical work as well and it will be great to get another hit out next week on a different course and really testing that adaptability in back to back racing. So hopefully by the time we get to Tokyo we’ll have blown out all the cobwebs and we’ll be ready,” Fox said with the team set to travel on to Germany on Monday to race at the 2021 ICF Canoe Slalom World Cup in Markkleeberg / Leipzig next weekend (18-20 June 2021).

In the men’s kayak events, Tokyo team mate Lucien Delfour just missed out on the top-ten final after finishing 13th in the semi-final following two gate touches and four seconds in penalties. But with a fast raw time of 92.03 seconds and a strong technical performance throughout the rest of the course, Delfour was also happy with his return to the international racing circuit.

“It’s really good to be back here.  It’s been a while, almost two years and it’s quite special and exciting to be able to race again in the international field. It’s our first race in a really long time, since the 2019 worlds which is quite a while. We did have selections in 2020 which was a good race but we didn’t get to travel last year so for us it was quite a long wait,” Delfour was thankful for the opportunity of an international hit-out before the Games.

Reflecting on his semi-final run, he added, “I started as a smooth semi final run, but I ended up touching (a gate) half way down and had to make up that time. I ended up taking quite a few risks and unfortunately it didn’t really pay off.”

“I still had a pretty good raw time and I was happy with the pacing in general. I did some really good things on the course but with these two touches and quite low gates, today was fairly tricky. But just being able to race again is exciting and I will take it as a bit of a warm-up and try to do a bit better next weekend.”

On Sunday, Daniel Watkins will join the racing action again, following his strong heat in the men’s C1 on Friday, which saw him finish fifth. Jessica Fox and sister Noemie Fox will kick off the final day in Prague for Australia in the women’s C1 semi-finals, which are scheduled to start from 9:00 a.m. local time (5 p.m. AEST).

The opening ICF canoe slalom world cup of the season will wrap up with the Extreme Canoe Slalom events, with the discipline to premier at the Paris 2024 Olympic Games. Noemie Fox is the only Australian contesting the event and qualified for Sunday’s series with a seventh place in the trials run on Saturday.

Racing can be followed live via the ICF live stream on https://planet.canoeicf.com/2021SlalomWorldCupPrague as well as on Eurosport and the Olympic Channel.