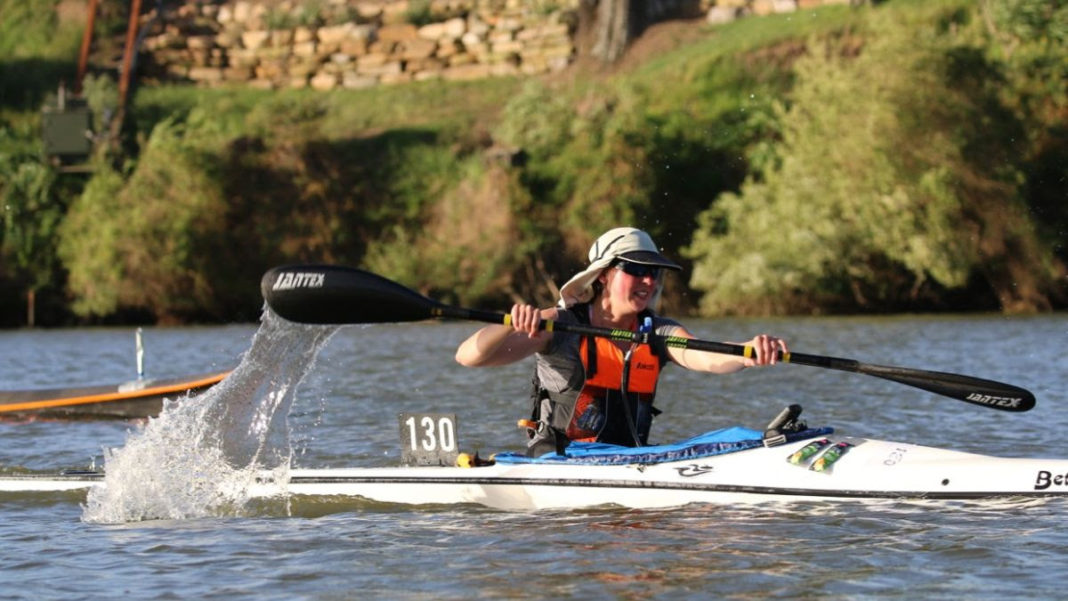 I first got into paddling through school, as Strathcona in Melbourne fielded annual teams for the Murray Marathon School’s Relay. I loved being out on the water, the challenge of learning to handle a boat, and the fact that racing over distance was as much a mental game as a physical one! Fast-forward ten years and a move up to Sydney threw me in with the enthusiastic bunch at Lane Cove River Kayakers. The Classic was the race everyone did (or landcrewed for, or talked a heck of a lot about) and it seemed like a fabulous excuse for my sister Sophie and me to book a paddling goal together despite the Melbourne to Sydney distance. Along with the Myall Classic in September, we had one weekend training together in Melbourne where our aim was to “make it to Wiseman’s” and paddle 60kms in one day. On the night itself, we absolutely loved the journey down the river, which seems to grow and change with each time you look at it. But of course we had overestimated ourselves thinking we could post a super-quick time on our first attempt. We took quite a bit of time at Sackville and Wiseman’s, I hadn’t worked out how to lock the screen on the GPS (resulting in the unit dying a few times and an unplanned stop-off at Low Tide Pitt Stop begging batteries), and in retrospect neither of us ate enough! But hey, we finished, and improved on our time over the next two years – turns out you have to learn to paddle these true ultra distances before paddling them fast. I feel very lucky to have a sibling relationship that can survive three trips down the Hawkesbury!

My little nephew came into the world at the end of September 2019, so it was time to tackle the race in a single. I’ve always been a pretty staunch K1 paddler, so the women’s open K1 record of around 9hours 54min seemed like the natural choice of a slightly ridiculous goal, albeit with a more stable boat than I usually paddle. I was lucky enough to make the Australian Marathon Team in 2019, competing at the World Championships in China the week before the Classic, so I knew I’d be super fit for the race, if a little jetlagged. The record was almost ten years old and had been set when all K1s started together. Following last-minute permission to start with the men’s K1s, I ended up sitting on the start line feeling incredibly motivated to give the race everything. And after three years of training, my partner Frazer was exceptional at quick pitstops!

The biggest challenge for me paddling the long races is still a mental one. While I love the challenge, I’m also good at digging myself a mental black hole if things aren’t going to plan, talking myself further down rather than buoying myself up. Of the later start I had some great company in Lane Cove coach and mentor Tony Hystek until Wisemans, combining great tides, his rather epic wash, and my solid night vision for a speedy 65kms. After that I was on my own, remembering to keep eating and marvelling at the river by night. Down below Wiseman’s the bioluminescence in the water put on a fabulous show, and I felt alone enough for some very out-loud positive self-talk, even allowing myself to howl at the moon at one point. Why not? It’s not like we get an experience like the Classic every day of the year! With a strong outgoing tide that carried me all the way to the finish, I ended up beating the record by a little more than planned and was the fourth fastest paddler on the night in a single regardless of gender. While I will always be a record chaser, the experience of being out on the Hawkesbury at night is also such a unique part of this race that it will continue to draw me back.

Clubs form such an integral part of the paddling community, and nowhere is this better demonstrated than at the Classic. Knowledge of boats, the race and the river are passed down from the paddlers who have clocked up ultra races in the double digits to those of us who are a bit younger, greener and more gung-ho. As October approaches, the team energy keeps us motivated to do the long paddles, and the feeling of camaraderie is a huge help through the night. Some fast paddlers don’t stop at Sackville and Wiseman’s, but last year the excitement and adrenaline that I felt meeting the Lane Cove crew at the 65km mark (I was on track for the record by that point) was a huge morale boost that kept me spurred on right to the finish. Particularly if you’re new to the Classic, I can’t speak highly enough of finding a club or a mentor to share the preparation with.
I would really like to see marathon and ultramarathon paddling in NSW become a more diverse sport, particularly on the gender front. Change comes from many different parts of the paddling community, and I look forward to the Classic doing more to encourage and champion female paddlers. Women are just as varied in their ability, desires and goals for the Classic as men, so it would be great to see a more nuanced approach to classifying the start times of female paddlers so that we can enjoy the night whatever the goal. In races such as this where physical strength must be coupled with mental endurance, good nutrition and some navigational savvy, there will only be more of us who challenge ourselves and post top-end times as a result!