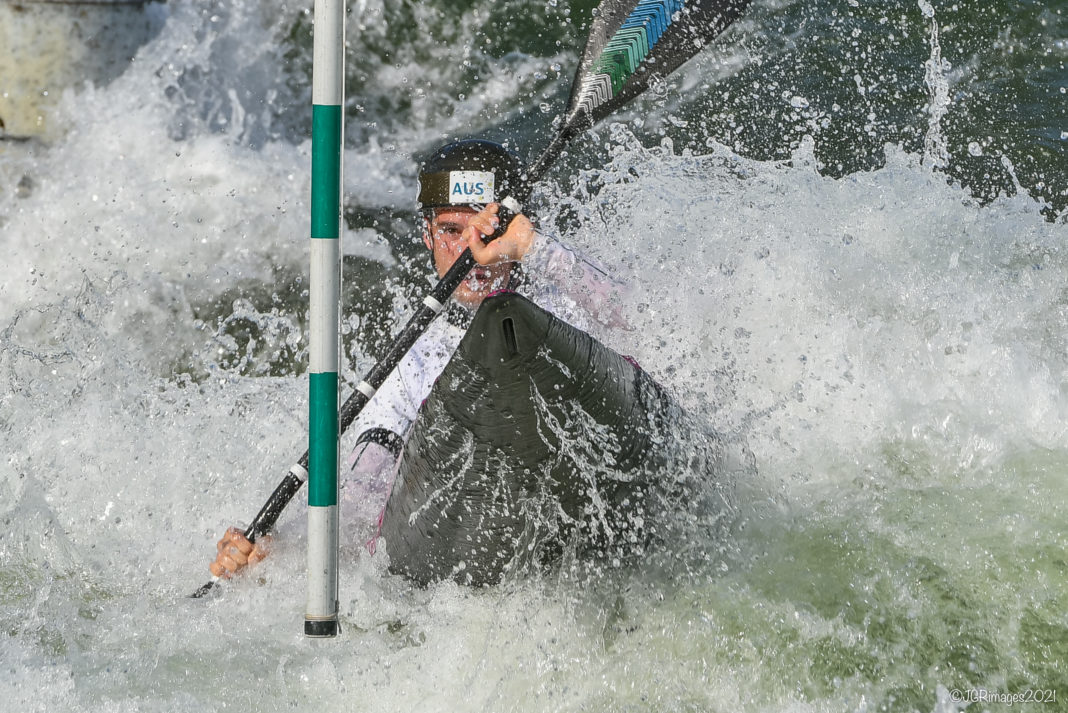 The three-event series wrapped up on the weekend with dual Olympic medallist Jessica Fox taking home the wins in the women’s C1 and K1, Olympian Lucien Delfour in the men’s K1, and Olympic Games debutant Daniel Watkins in the men’s C1.  All three won the races on the final weekend (13-14 March) as well as the overall series.

The series took place at Penrith Whitewater Stadium, the national centre of excellence and Sydney 2000 Olympic canoe slalom venue, which was just announced as the host of the 2025 ICF Canoe Slalom World Championships on Friday. Full story HERE .

Just four and a half months out from the Tokyo 2020+1 Olympic canoe slalom competition, Fox, Watkins and Delfour presented themselves in strong form and were thankful for the opportunity after almost a year without racing.

“It’s been awesome to get back out there on the start line, put a race bib on, hear the start buzzer and just race and feel that excitement and the nerves to better your runs each time.  It’s been really good,” Jessica Fox said at the conclusion of the series.

“We’ve had some great courses, some challenging moves and really competitive times from the boys.  And for me it’s been good to push myself.  I think we really missed that international competition and normally we have so many international athletes out here to put on an amazing, world cup level event at this time of year.  Instead, we really had to do that internally and put ourselves into that situation mentally and physically.”

“I’m really happy with it and it’s been a great exercise and I’m really grateful to all our teams, staff and volunteers and everyone who helped to put on those events because it was really valuable for the athletes,” Fox added.

The Penrith Open Canoe Slalom Series included three two-day events with two runs in each class every day, making for a full race program with many of the athletes racing in both the kayak as well as in the canoe events.  The series marked the return to racing for Australia’s canoe slalom athletes after a challenging year following the postponement of the Olympic Games and travel restrictions.

“It’s been awesome to get back racing.  It was basically a full year for myself to not get on a start line so having three races, really six races back to back within a month has been incredible.  It’s been great to clear out the cobwebs and to get some experience before Tokyo,” Olympic Games debutant Daniel Watkins said, who only recently was able to get back to the National Centre of Excellence at Penrith from Tasmania.

Watkins finished the successful series with a clean sweep and smashed out some impressive times, winning the final race in a clean run and a time of 90.37 seconds.

Local Penrith paddler Lucien Delfour also enjoyed getting back into the swing of things and concluded the series with two wins back to back, posting a fast final run in 84.12 seconds.

“Overall it was a really good series.  Especially after COVID and all the time off the water it took me a bit of time to adjust and start racing properly.  The first weekend was a bit hard and I felt a bit rusty after not competing for almost a year and coming off a pretty intense fitness block.  But the second and third race were much better and especially this weekend I started to feel better on the water,” Delfour explained.

“It was good to race and to gauge where I’m at and I’m starting to feel a lot better about the Games.  It will all happen really quickly and hopefully we’ll be able to go to Tokyo in May,” Delfour added with the team planning a training camp in Japan in May.

“It’s only a few months until Tokyo and we are really excited to hopefully get over there in May for a training camp and get back on that course and get a feel for it.  To just be in that environment again will be really exciting,” Jessica Fox said.

“I’m looking forward to get back over there.  It will be a very different environment, quite a strict environment but I’m just really excited to getting there.  I think that’s when it will start to feel real, because I guess with that one whole year of postponement you really don’t want to get ahead of yourself.  You want to just take it as it comes.”

“And then from there we’ll get into the World Cup series in Europe so I think it will be a big trip before the Olympics but I’m really excited to get back into it, into the training camps, see our international competitors again and then hit the international start line again,” Fox added about the plans ahead.

But before then, next racing opportunity will be back on home waters for the Paddle Australia Canoe Slalom Selection Trials, which are scheduled at Penrith Whitewater Stadium from 16-18 April 2021.

While Australia’s Olympic canoe slalom athletes presented themselves on track for Tokyo, the Penrith Open Series also saw some exciting performances of the local up and coming paddle talent with Codie Davidson (NSW) impressing throughout the series and taking home the win in both the Junior C1 and K1.

Lachlan Bassett (NSW) took home the overall series win in the men’s C1 in the U23 category, while Tristan Carter(VIC) won the series in the men’s K1.  In the Junior events, Dominic Curtin (NSW) finished the series on top in both the men’s C1 and K1.

For the first time, the event series also included an Extreme Canoe Slalom event – the new canoe slalom event that is set to premier on the Olympic program in 2024.

At Paris 2024, Extreme Canoe Slalom will be featuring for the first time on the Olympic program with the new Olympic medal event only added recently.  Extreme slalom is a relatively new discipline to canoe, but its thrilling head-to-head format has attracted new fans and strong television ratings since its introduction to the International Canoe Federation (ICF) world cups and world championship programmes.

The overall Extreme Canoe Slalom Series was won by Kaylen Bassett (NSW) after two second places and a win in the final round.  The final race on Sunday saw Bassett win ahead of Ewan Mackie with Noemie Fox taking third place.