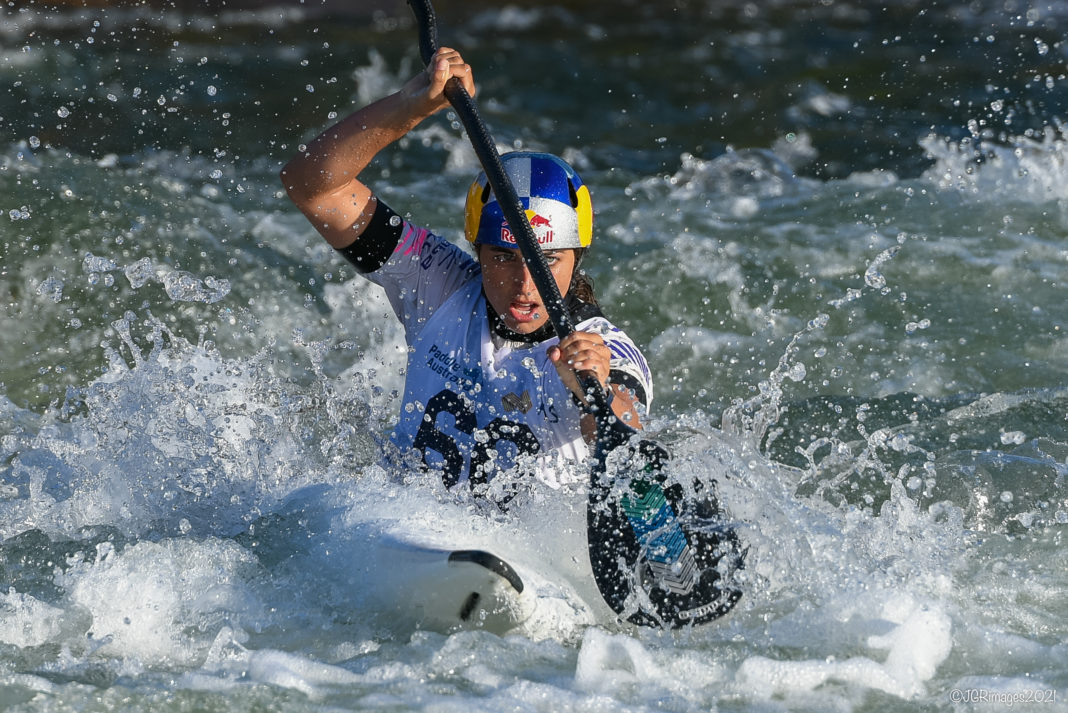 The 2021 Penrith Open Canoe Slalom Series is underway this month with the second round of the three-event series wrapping up at Penrith Whitewater Stadium last weekend (6-7 March).  Tokyo 2020 Australian Olympic Team athletes Jessica Fox (NSW), Daniel Watkins (TAS) and Lucien Delfour (NSW) made the most of the racing opportunity and are leading the series after two events and ahead of the final two days of racing this weekend (13-14 March).

Daniel Watkins also took home the win in the Extreme Canoe Slalom on Sunday – the new canoe slalom event that is set to premier on the Olympic program in 2024.

The Penrith Open Canoe Slalom series has attracted a strong domestic field and was put together by Paddle Australia’s High Performance program in response to ongoing travel restrictions, to offer Australian paddlers smaller scaled canoe slalom events in February and March instead of the International Australian Open and Sydney International Whitewater Festival, which usually take place this time of year.

“It’s been so good to put on a race bib, hear the clock countdown and race again!  I’m really grateful to Paddle Australia and all our volunteers who have put on these events for us.  Even though we haven’t got the international race field, it is still super valuable exercise for us to race.  I’ve been happy with my races and looking forward to the next ones” Jessica Fox said after winning all of her eight runs so far.

“Obviously we don’t have the comparison so it’s hard to know where we are at compared to our competitors but I’m just focusing on doing the best runs I can and looking forward to the next time we can race with our international friends.”

The Penrith Open Canoe Slalom Series includes three two-day events with two runs in each class every day.  This makes for a full race program with e.g. four runs a day for Fox, who like many of the athletes is racing in both the kayak as well as in the canoe events.

“I think we are all quite conscious of the fact that racing opportunities have been limited, so it’s important to make the most of these races, even if they are only domestic competitions, to solidify the work over the last few months and test anything ahead of Tokyo,” Fox explained.

Come Tokyo, the dual Olympic medallist will also double up in both the women’s K1 as well as the women’s C1, with the latter to premier at the Games this year.  This will make Tokyo the first Games with gender equal events in canoe slalom.

With Tokyo less than five months away, Fox has solely been focussing on the slalom events, while for the first time the Penrith Open Series has also been featuring the new Olympic discipline of Extreme Canoe Slalom.

“I haven’t raced extreme at these events yet due to managing some niggles but there’s been a good vibe and it’s great that Paddle Australia is being proactive in getting the ramp and racing experience happening ahead of 2024.”

At Paris 2024, Extreme Canoe Slalom will be featuring for the first time on the Olympic program with the new Olympic medal event only added recently.  Extreme slalom is a relatively new discipline to canoe, but its thrilling head-to-head format has attracted new fans and strong television ratings since its introduction to the International Canoe Federation (ICF) world cups and world championship programmes.

“It was really fun racing the ‘extreme’ slalom this weekend for the first time in Australia.  I’ve raced plenty of extreme races on real rivers around the world and I think the format needs some work but there’s plenty of time till Paris and I’m keen to see where the sport goes,” Watkins said about the new event.

Like Fox, he has also been thankful for the racing opportunity and has been racing the full program in both the men’s C1, as well as in the men’s K1.

“It’s been pretty good, we’ve been getting better each weekend.  It’s been pretty much a whole year since I’ve last raced and it’s been good having these races back to back, Saturdays and Sundays.  Four races are done now and there are two more to go.  It’s awesome getting on that many start lines really,” Watkins said.

“There’s no internationals here this year but all Australians are paddling really well and are really competitive and it’s always good to race them.”

Lachlan Bassett (NSW) is leading the U23 category, while Dom Curtin (NSW) is ahead in the Junior rankings.

In the men’s K1, Rio Olympian und Tokyo 2020 K1 paddler Lucien Delfour has had a consistent series against a strong domestic field and goes in to the final weekend as the leader.

Tristan Carter (VIC) is leading the U23 series, while Dom Curtin also sits on top of the ranks in the K1 Junior event ahead of the final weekend.

Four runs in each class are scheduled again for the final weekend of the series (13-14 March) at Penrith Whitewater Stadium, with the final series winners to be decided at the end of the event.

Sunday, 15 March will once again feature Extreme Canoe Slalom with the final winner yet to be decide with Benjamin Pope winning the first weekend and Daniel Watkins the second weekend of the series.

Format
There will be two runs on each day in each class (kayak and canoe) and the Extreme Slalom will be held after the slalom on the Sunday.

The winner of the canoe slalom event will be determined by the best of two runs on each day and there will be an overall Canoe Slalom Penrith Open Series winner.

Series updates will be published on www.facebook.com/auspaddleteam and a media release will be send out following Penrith Open 3 next week.