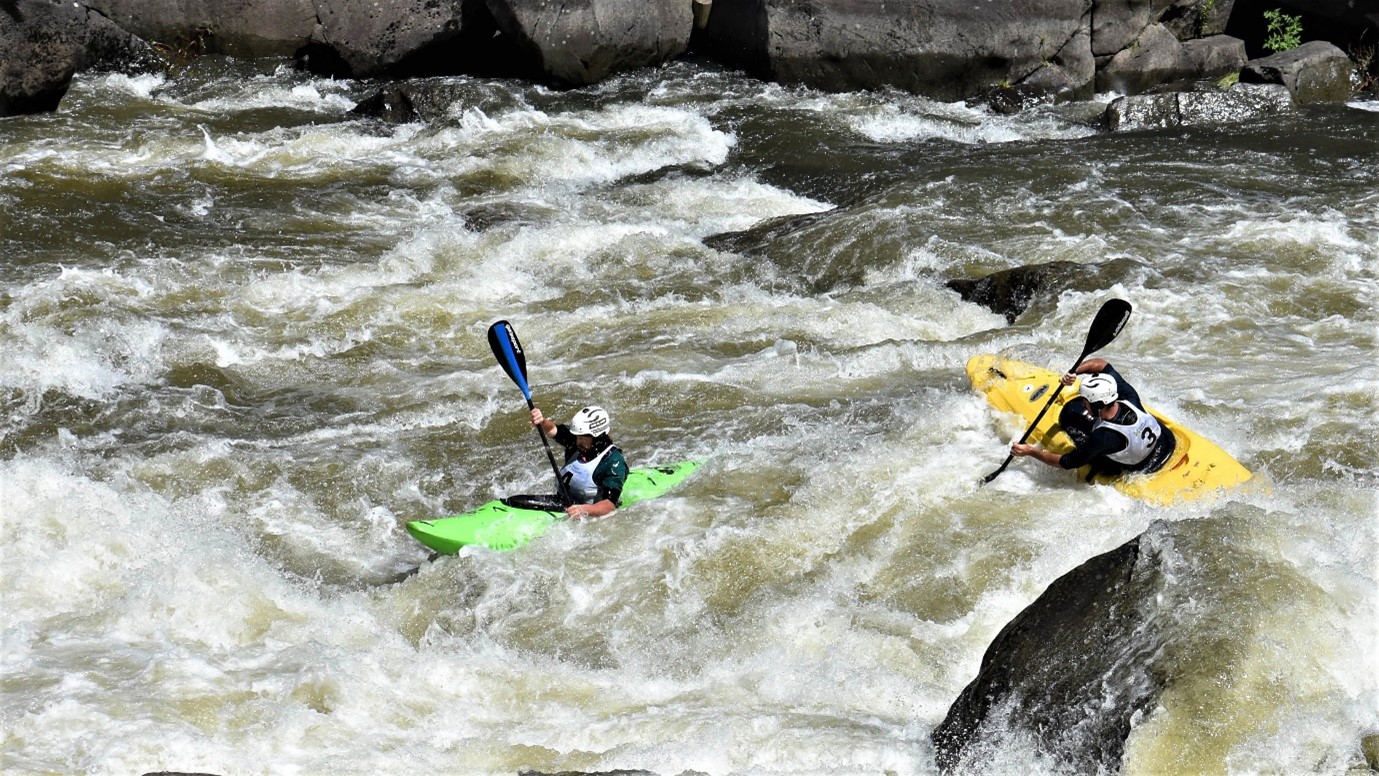 Paddle Week 2021 was a buzz for me and the hundreds other kayakers and rafters who joined in. This was a whitewater extravaganza – Hydro Tasmania provided scheduled water releases on 4 rivers over 8 days, creating a beautiful whitewater kayaking holiday.

We started off at the Upper Mersey Whitewater Course, a grade 3 river.  Over 100 kayakers and rafters of all ages were ducking around the rapids, showing how popular this river is with all ability levels.

Day 3 and 4 was the West Coast’s turn with a release into the King River.  The 80 cumec release creates a fantastic play wave just below John Butters Power Station where many paddlers stayed all day to surf. The wave is about 1m high and fast, providing good fun and entertainment for kayakers and onlookers alike.  A four hour river trip down the King River brought us down to Macquarie Harbour. This trip has some good grade 3 rapids and powerful swirling water and the intimidating Sailor Jack rapid (grade 4), which rafters and many kayakers portage.  Two kayakers on our trip successfully paddled it.  Below Sailor Jack is a get-out point for those travelling back to Queenstown on the West Coast Wilderness Railway, but we continued on to the bottom, finishing at the same time as the popular King River Rafting tour.

On Days 5 and 6 we headed to Brady’s Lake where releases from Bronte Lagoon down Woodward’s Canal create a very short and steep run.  In the 1970’s paddlers created a slalom course here, which has hosted some Australian Championships, as well as being the home away from home for Derwent Canoe Club kayakers.  The fast water and Cruncher Rapid provided plenty of entertainment, and Kate Eckhart organized a boatercross event which captivated the crowd as they watched highly skilled kayakers bustle each other and a large fit ball down the canal.

On Day 7 we headed to Cataract Gorge in Launceston. A flow of 35cumecs was released from Trevallyn Dam, the final catchment on the South Esk River.  Once again, I was reminded of how friendly and inclusive Tasmanian paddlers are, as they organized, ran safety and led groups down grade 3 & 4 rapids.  Upstream there are the difficult Toaster and Sandwich Press rapids and downstream Plateau and Slalom Rapid take a bit of negotiating.

The end of paddle week was capped off with the Hydro Tasmania Cataract Gorge Extreme Race. Many paddlers and rafters were happy to try the Slalom Rapid before the race and leave the jostling and racing to the experts.  In the afternoon, a crowd of paddlers and several hundred onlookers gathered along the river edge and the scenic Cataract Gorge walkway to watch the race. The racers, some of Australia’s best white-water kayakers, faced off in exciting heats of four with the top 2 from each heat progressing to the next round. The final heat of 4 kayakers was decided by time trial and was an impressive display of power and control. It ended with incredibly close times, and a dead heat for first place between Hamish Dalziel and Daniel Watkins.

A big thank you to Hydro Tasmania and Geoff Macqueen from Paddle Tasmania for organising such a fantastic week. The next Paddle Week is planned for late January 2022 – keep an eye out on the Events section of Go Membership later this year for the precise rivers and dates. I’m looking forward to it!