Home General Pink up this October and Paddle in Pink – Penrith Paddlers kick-off... 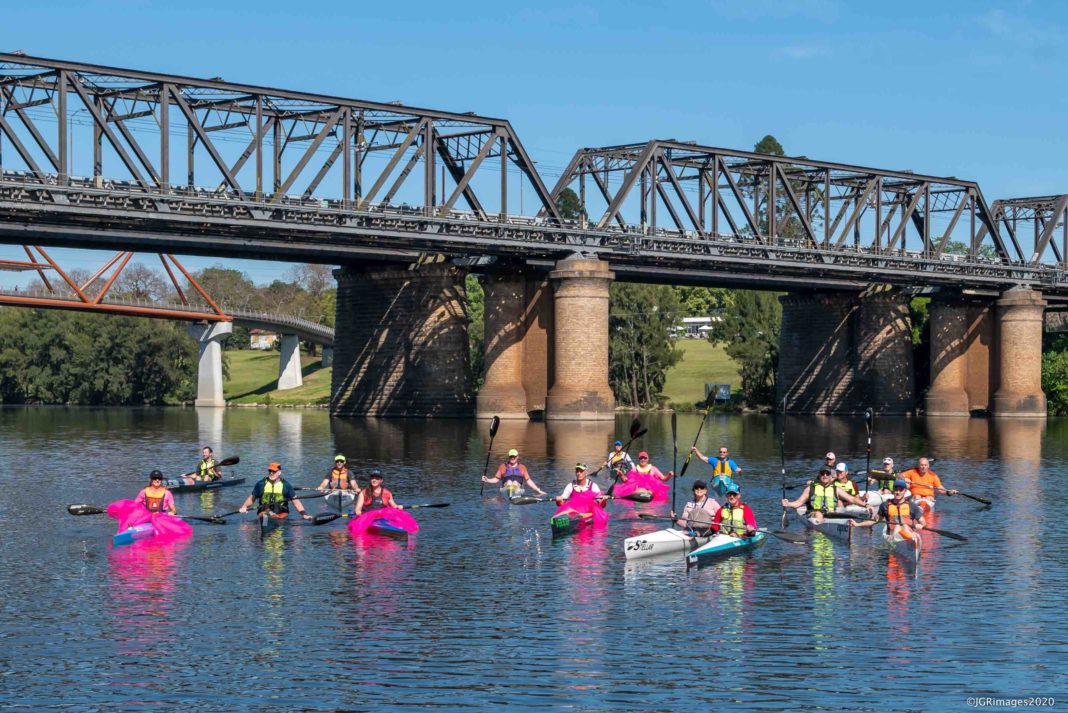 It’s “Pink up” time for Penrith’s paddlers (and beyond), with sport and business in Penrith and surrounds joining forces this breast cancer awareness month in support of the McGrath Foundation.

The ‘Paddle in Pink’ idea came up in discussions at a recent Penrith business function, when Gai Hawthorne, CEO of the Penrith CBD Corporation and leader of ‘Pink Up Penrith’ introduced the campaign to Paddle Australia’s Project Consultant, Olympian and former champion paddler Richard Fox.  Fox was quick to get the paddling community behind the campaign, launching the Paddle in Pink idea.

“We see Paddle in Pink as an original way to use a paddle sports theme to support the Pink up Penrith campaign, run in support of the McGrath Foundation, and help provide support for people experiencing breast cancer.  As well as contributing to Pink up Penrith, we aim to grow awareness of all types of paddling across the Penrith River, Whitewater and Penrith Lakes venues”, said Fox, sporting a Glen McGrath signed pink cap at the first Paddle in Pink event on the weekend.

“Of course, the promotion and association is not exclusive to one place.  So, wherever you are, you can share the spirit and Paddle in Pink.  Make sure you take a picture using the #paddleinpink hashtag and join our community” Fox added.

Penrith Valley Canoeing followed the call and kicked off a month of pink paddling events, with local paddling enthusiasts gathering riverside at Weir Reserve for the morning briefing from the club Chairman Dave “Jake” Lowe on Sunday.  It was round five of the local Club Championship and a 12km course on the Nepean lay in wait for a small group of 20 racers, this time taking on a different colour – Pink!

“It’s the first time our club has been associated with a charity event and we’re happy to get on board with the Paddle in Pink idea and support the McGrath Foundation”, Lowe said, who later took out third spot in the handicap race.

“We welcome all levels of ability and the handicap system takes account of that.  We’ve got some serious racers and some who are just happy to go the distance” said Ware who was last to start and overhauled the field on the final leg.

For navigator Trueman of Falconbridge, who has written a book “All the Way Round”, about his 17,000 km, 16-month voyage circumnavigating Australia. the 12km must have seemed like a sprint.  “The COVID situation has put a dent in my plans but when it lifts, I’ll be off to the West Coast of Tassie for another adventure,” Trueman said.

Lesley Duke, the mother of the youngest starter, 15-year-old, Sophia Chen, said “we got here early to “pink up” the bankside, and it is great to see people pinking up on water for something that means a lot to many of us.  My mother survived two episodes of breast cancer and I will always show up and promote the cause”, Duke said.

A few Windsor based paddlers also supported the event, including Paddle Australia national team marathon paddler Laura Lee, who gave the tiring Fox a wash ride home, “it’s a fun race and nobody gets left behind”, said the modest Lee, who won a silver medal at the International Canoe Federation Canoe Sprint Masters Championships in 2018.

The Paddle in Pink Campaign, supported by Paddle Australia, and promoted by Fox&Co, aims to go the distance with events on the Nepean River, at the Regatta Centre and at Penrith Whitewater throughout October.

Paddlers in Penrith and around the country are encouraged to come along or support from afar by pinking up your paddle, snap and post a selfie using the hashtags #paddleinpink and #pinkuppenrith.

A Paddle in Pink closing ceremony and luncheon will be held at Lakeside Restaurant at Penrith Lakes on Friday 30 October.

The campaign will also be promoted on land by Insta-famous Fox-foster dog Pink, who will be out and about Penrith on pink paw patrol and is also hoping for others to join her.

Further information about the campaign, event dates and the ways to support Pink Up Penrith and the McGrath Foundation, can be found here:

You can donate to the cause here: https://fundraise.mcgrathfoundation.com.au/fundraisers/pinkuppenrith