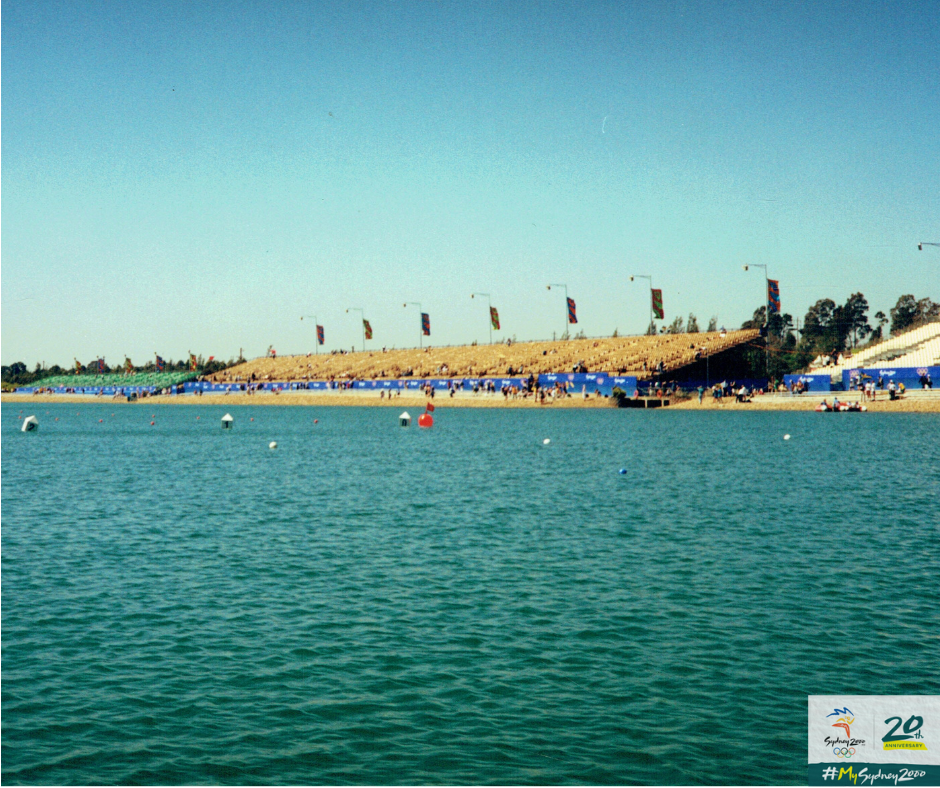 Today, October 1 2020, marks the 20th anniversary of the final day of the Sydney 2000 Olympic Games canoe sprint competition (26 September – 1 October 2020) and on this day 20 years ago Australia ended the Games with two hard-earned kayak medals – one silver and one bronze.  But while there was plenty of reason to celebrate, the day also went down in Olympic canoeing history for an infamous weather event and a competition day that almost never was and is still vividly remembered by everyone 20 years on.

Robinson, Borchert, Wood as well as Collins and Trim had all brought home bronze medals from Atlanta in 1996 and expectations were high for the Australian paddling team with the men’s and women’s K2 500 as well as the women’s K1 500 the highly contested events. 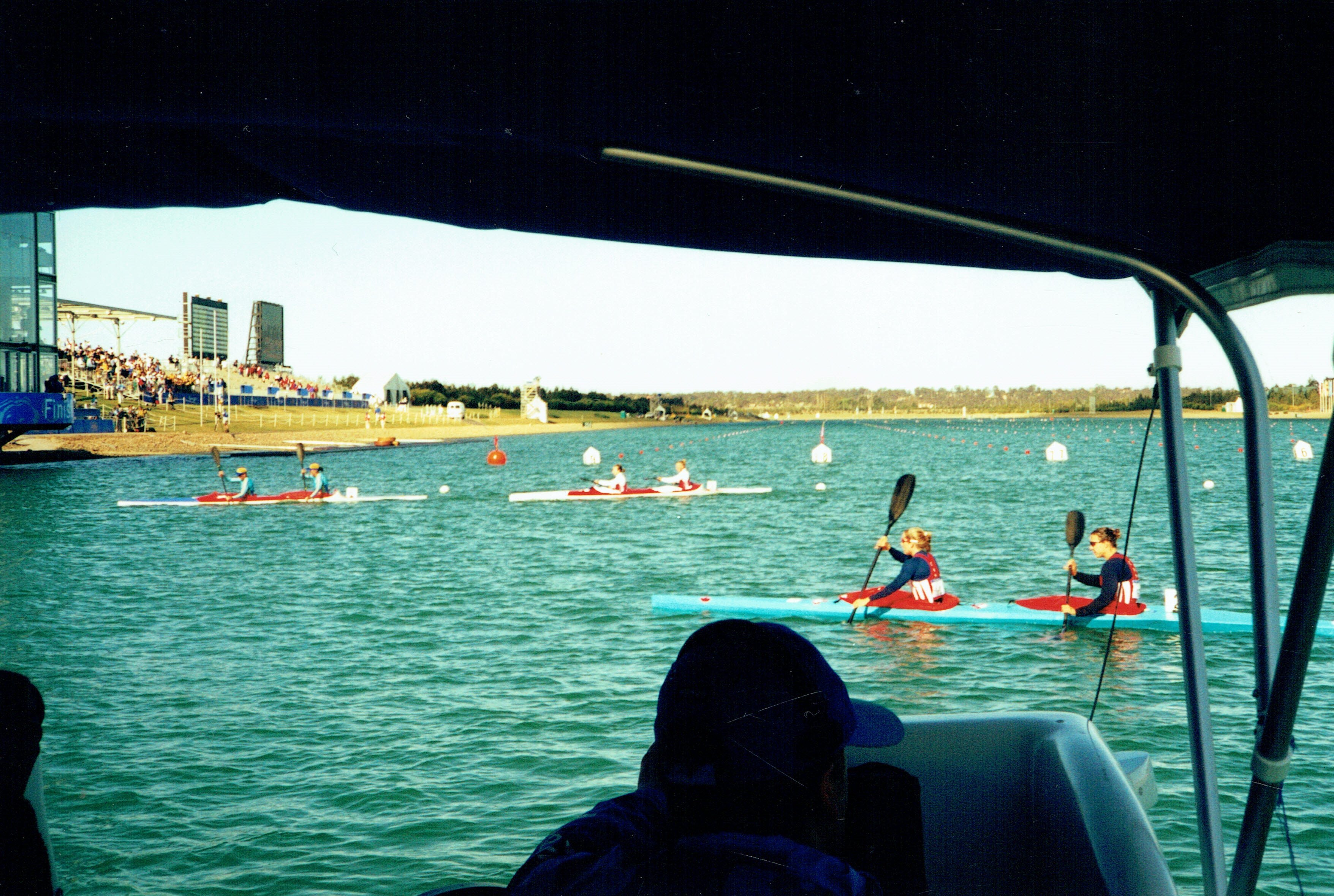 The crews of Daniel Collins and Andrew Trim as well as Anna Wood and Katrin Borchert had consistently been placing at world championships in the years between Atlanta and Sydney and they came into the Games with a single focus – to walk away with medals.

All three events were held on the final day of the Games on October 1st – a day of competition that almost was not.  An infamous day at Sydney International Regatta Centre with the most horrible weather conditions, but with a silver lining when Daniel Collins and Andrew Trim took home a silver medal in the men’s K2 500 and Katrin Borchert a bronze in the women’s K1 500.

By the time the finals were contested the course was awash with waves and howling winds after a week of glorious weather.  The call was on the Chief Official who delayed the start of racing by close to six hours, despite locals pleading to get racing under way knowing that conditions were likely to be worse by the time races started. 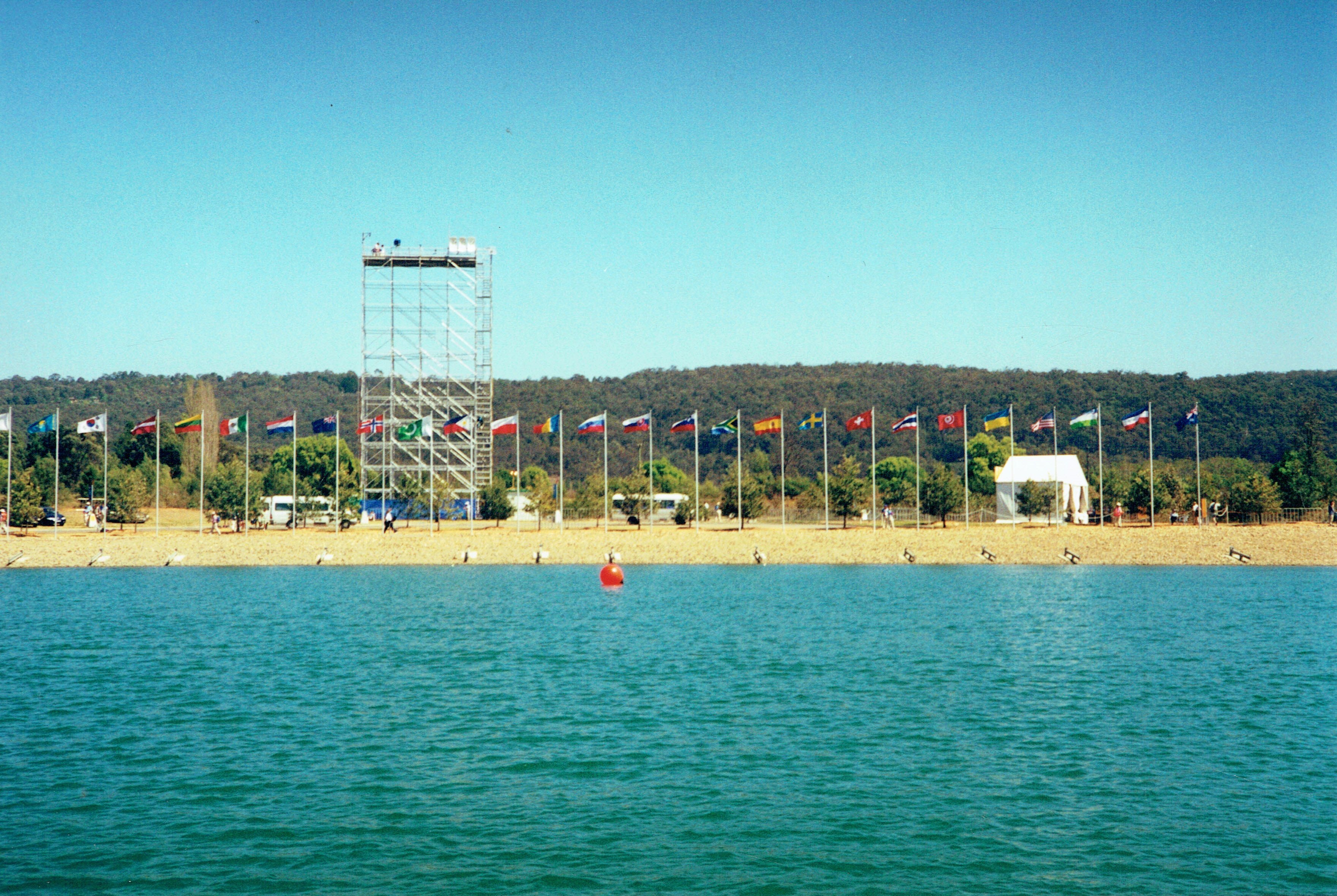 First up was the women’s K1 500 with the gates at the start line bobbing so violently in the water that paddlers could not hold their boats in position resulting in false starts and delays.  Katrin Borchert was out of contention for most of the race sitting out of the places until the last 50 meters when her grit and determination pulled her in to the bronze medal position behind former German team mate Joseffa Idem who was now racing for Italy.

In the men’s K2 Daniel Collins and Andrew Trim were racing at their third Olympic Games after they had medalled at two of the three world championships between Atlanta and Sydney and had their sights firmly set on gold.

The crew led out of the blocks again in atrocious conditions and tussled from beginning to end with crew from Hungary in the adjacent lane.  A final surge by the Hungarians with just meters to go rebated Trim and Collins to silver, which was one better than Atlanta four years earlier.

“Our last day of racing was crazy with horrendous wind and weather and that is something I will never forget — that last day where it was very likely that we didn’t even get to compete,” Collins recalls the challenging conditions on the day. 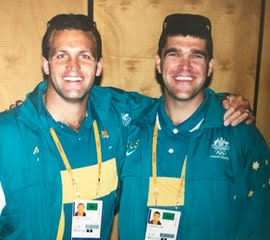 “We were in the final almost competing in front of no one because it was so late in the afternoon with the Closing Ceremony on the finals day.  But it wouldn’t have bothered me competing on the moon as long as I was competing against the best.  So, home advantage was great but the quality of the field is what’s most important,” Collins added, who represented Australia at four Olympic Games, three together with Trim, taking home one bronze and one silver medal as well as a world champion title in 1997.

Collins and Trim had made their Olympic debut together in Barcelona, missing the final in both the K2 500m and 1000m events and at their subsequent two Olympic appearances together they concentrated on the 500m event with great success.

“Paddling with my best mate, just finishing that chapter with Trimmy was really, really special.  Performing on the big stage in a clutch moment was definitely one of my Sydney 2000 highlights” Collins said. 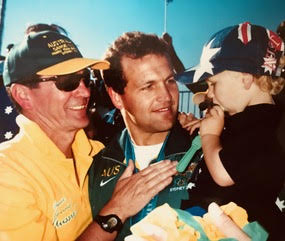 While 20-years is a long time ago, memories are still fresh, especially those of family and friends as Collins reminiscence.

“Cathy’s Freeman’s Race and seeing her literally lift the nation was amazing and the other highlight for me was the general spirit that was associated with everyone that was in Sydney and I mean everyone,” Collin adds about his overall Games highlights.

“The city was just an amazing place to be – during the period and probably three, four months before the Games and a good couple of months after.  The spirit that the Olympics brought was incredible.”

Since his paddling, Collins has enjoyed success as high-performance manager and fitness expert in sports and shares his advice with those aiming for an Olympic career, including his son Jackson Collins, who made the U23 team again this year, after winning a gold (U23 men’s K4 500) and silver (U23 men’s K2 1000) at last year’s world championships.

“One – work really, really hard.  Nothing substitutes really hard work.  And sacrifice, you have to sacrifice plenty and be willing to do so and enjoy the sacrifice.  And the second one – have a parallel career.  I think having a profession is extremely important for the right balance and perspective.”

While there was a silver lining to Daniel Collins’ Sydney 2000 memories, those of fellow Atlanta 1996 bronze medal winning team mate and four-time Olympian Anna Wood, are not that memorable.

Wood lined up in Sydney with her Olympic bronze-medal partner from Atlanta Katrin Borchert, who backed up in the K2 500 following her bronze medal win in the K1 earlier in the day.

But following the race postponement, the toll of waiting, being constantly at a state of preparedness for six hours inevitably took its toll on all paddlers that last day.

The conditions were appalling with boats bobbing in the gale force westerly winds that continued to rip down the course at the start of the K2 race.  In the end, the team raced a valiant race but could only finish sixth.

“We had the worst conditions of all time; I’ve never paddled in or for sure raced in such conditions.  Head wind like I’ve never seen before, we had to tape our spray decks onto the cockpit so they wouldn’t be ripped off due to the waves, races delayed for over five hours on the last day of racing and we came sixth which was very disappointing at the time,” Anna Wood recalls the race.

But where there is shadow there must be a light, and for Wood it was her six-year old son Jordan, who was at the Games to cheer her on from the side-lines.  Having Jordan there, is the memory she says was the highlight of her Games, even though they both shed a lot of tears when they first reunited after the race.

“Jordan was so disappointed Katrin and I didn’t win a medal, he cried.  I cried too, so much hard work and such a letdown experience even though I was very happy for Katrin winning bronze and Danny and Trimmy winning silver.” Wood recalls.

“I was moping around the next day and met Jordan and his nanny in Sydney, I was still very down and disappointed, but Jordan had the biggest smile on his face when he saw me and had a present, I had to unpack.  It was packed in a big box in wrapping paper and lots of tissues: it was a medal with engraved on it: to the best Olympic mum in the world, love Jordan.”

“He was so stocked, I just cried and realised that what’s really important in life is those people close to you who really don’t care if you win a medal or not, to Jordan is was simply his mum, a role more precious and satisfying than anything else in the world,” Wood shares her emotional memory.

“That was a very important session in life for me; winning medals is great but it’s a moment in time and forgotten a few months down the track.  The love of a child or loved ones is so much more precious and satisfying than that and will hopefully last a life time.”

Wood who has been coaching the Australian women’s kayaking team over the last few years and has returned to the Games as a coach, says it’s these experiences and lessons learnt that have shaped her as a coach.

“As a coach I might look different at performances because of this and other personal experiences.  The medal never comes first, the athlete comes first including their mental and physical well-being.  If all is managed well, the athlete has the talent and has done the work, has a good balance in life in all aspects, performance will come along,” Wood explains.

“It’s imperative as a coach to consider an athlete’s personal circumstance and individuality. I highly value and respect athletes’ differences and versatility creates a more rounded and innovative team with athletes bringing different aspects into the team environment and culture.”

While Anna Wood continues to coach and mentor Australia’s current and up and coming Olympians, including her son’s wife Alyce Wood, Jordan Wood went on to become an Olympic paddler as well, representing Australia at his first Games at Rio 2016.  Both Jordan and Alyce Wood are selected to go to Tokyo 2020 next year for their second Games.

While Anna Wood is proud of her son, it was his own choice to follow the sport both his mum as well as his late father and 1992 Olympic bronze medallist Steve Wood excelled at.

“It has always been his own choice to paddle, I never got him out of bed or made him get into a boat.  My role as a parent was to teach him life skills, not protect him from life but teach him coping strategies for the inevitable setbacks that occur in once’s life time,” Anna Wood says.

“This of course has not been an easy process or easy road, lots of hurdles and obstacles to overcome but I would like to think life skills learned have also helped him in achieving the highest level in sports performance.”

Find out more about the sport of canoe sprint and Paddle Australia’s current and past Olympians here: https://paddle.org.au/auspaddleteam/

Follow #MySydney2000 as well as the @auspaddleteam for more on paddling at the Sydney 2000 Olympic Games.