Lockdown restrictions have been easing around the country and Paddle Australia’s canoe sprint and canoe slalom paddlers are slowly returning to their pre-COVID19 training routines – with a new goal and a new timeline after the Tokyo 2020 Olympic and Paralympic Games were postponed by one year to 2021.

Over the last couple of months, adapting to this major shift in goal posts has been one of the biggest challenges for everyone on the Australian Paddle Team after all Olympic canoe sprint and canoe slalom paddlers had locked in their Australian Olympic Tokyo 2020 Team selections just before the postponement.

Reorganising life around this shift in goals and timelines as well as settling into a new life and training routine during lockdown has been an ongoing task over the last couple of months.  And while athletes were training from home, spread across different locations around the country with state borders closed, Zoom and other technologies helped to keep the team spirit up and the team ‘virtually’ close.

Coupled with resourcefulness, creativity and working with the tools and skills on hand, the COVID19-lockdown period, despite its challenges, also made for plenty of positive take-aways with some of them here to stay. 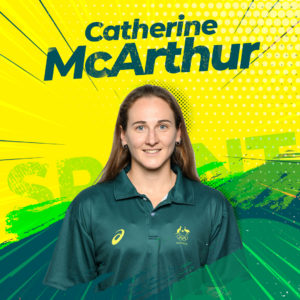 Take the Zoom-Pilates sessions, Gold Coast based sprint kayaker Cat McArthur introduced for the Olympic women’s team kayakers, which soon became a regular occurrence and weekly highlight that spread across the country to Perth, Adelaide and Sydney and even overseas.

“The idea about Zoom-Pilates sessions came about from a few different avenues. I was initially very quiet during COVID at my physio job, and our work had looked at the idea of taking some group Zoom classes for current clients.  I had never really done anything through online avenues before, so I wanted to gain some confidence and get feedback with my style of instructing with those I know would be happy to give me honest feedback.  So, I ran a session with my mum and dad back in Adelaide first, but also asked my fellow team mates if they could help me out and be my guinea pigs,” Olympic team first-timer Cat McArthur explained, who is a physiotherapist and guru Pilates instructor in her ‘other life’. 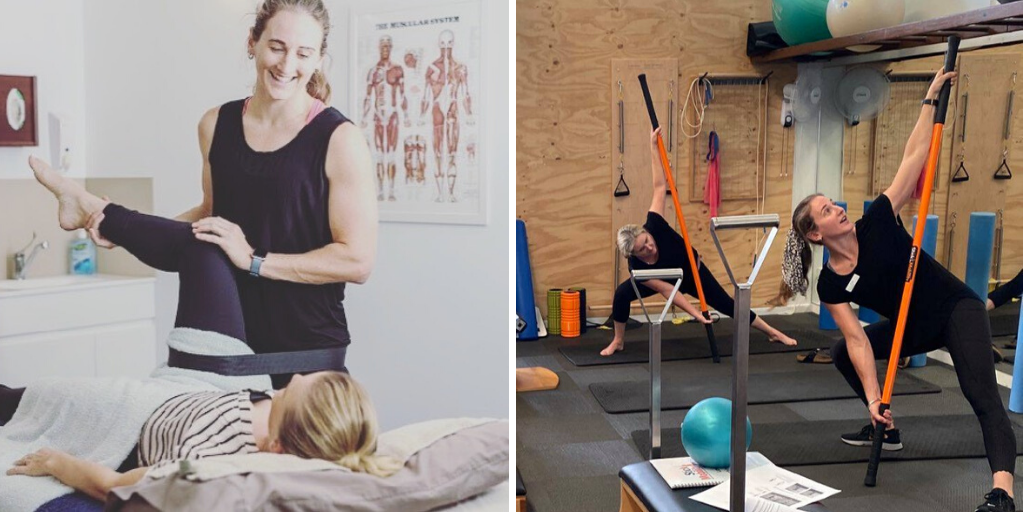 Cat McArthur works at The Living Well Studio in Burleigh, GC as a physio and pilates instructor

It was a win-win situation with the sessions not only providing McArthur with the opportunity to test her online-training skills on her team mates, but also delivering some much needed (virtual) social interaction within the team that everyone was craving for.

“One of the ideas of the sessions was about remaining engaged and connected during the whole lockdown period.  Whilst I am very settled in my living environment here on the Gold Coast, I also found myself unable to see my family and friends in Adelaide, as well as missing some of my team mates, who I would usually spend many hours with every day.  So having the idea of connecting on a weekly basis to re-group and reconnect was important,” McArthur said.

An initiative that was very appreciated by the whole team, including fellow first-time Olympic team paddler Shannon Reynolds who zoomed in from Western Australia and also enjoyed the team catch up while being separated from the rest of team. 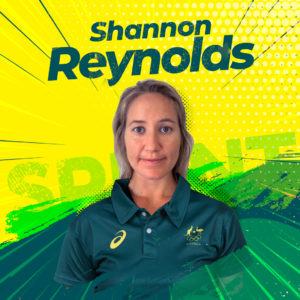 “It’s been a great opportunity to catch up with my teammates in an informal fashion, where we can laugh with each other (and at each other) and feel like we’ve done something together each week.  And it’s been a great reminder that we are heading towards a common goal and we will achieve our best as a bonded team,” Reynolds said.

Reynolds had done Pilates with McArthur before and already started to sweat only hearing about the first online session.

“When I lived on the GC, Cat took me to my first ever reformer Pilates.  After trying to keep up with her during that class I couldn’t walk for a week, and never went again.  My initial thoughts when Cat suggested an online Pilates session got me sweating immediately!  Cat has proved to be such a professional in this area that we all enjoy the sessions and we can all still walk afterwards,” Reynolds laughed.

“The sessions have been a great break from the normal, and sometimes lonely routines of paddling, running and gym.  And having not only our close (canoe sprint) team but special guests like our slalom weapon Jess Fox and our Swedish weapon Linnea Stensils join us is a credit to Cat’s initiative,” Reynolds added with the news about the sessions spreading quickly across the disciplines and international borders with Swedish Olympic kayaker Linnea Stensils, who often trains at the Gold Coast during European winter, joining online as well as Australian Paddle Team mate and canoe slalom paddler Jessica Fox and her sister Noemie Fox also keen to join. 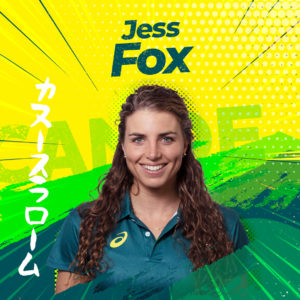 “I joined one of Cat’s sessions after she had been doing it for a few weeks – I reached out to
her and asked if I could crash the sprint party! It was really nice to connect with them on zoom and do a Pilates workout together,” Jess Fox said.

“It was nice to see everyone’s happy faces and catch up over the internet from our lounge rooms and yoga mats!  Unfortunately, we don’t spend a whole lot of time together as we are based in different states and our sports are competing in different places so it’s usually at the Paddle Australia Awards, or inductions that we catch up.  So It was nice to do a session together online in this way,” Fox added, who like McArthur is a Pilates fan.

“I knew Cat was a physio and had seen on social media that she was also doing Pilates classes.  It’s good to work on the smaller muscles, slow it down and focus on technique, breath work and activation.  Pilates/prehab work is one of those sessions I find hard to do by myself and enjoy a class or team environment to do it, so from that perspective it was great to have the video class with Cat and the sprint girls and it would be cool to continue,” Fox said.

McArthur, who is also working with one of the members of the men’s kayak team at her work, hopes she has inspired more of the team to continue including Pilates in their post-COVID work outs.

“I think anyone who has given Pilates a go, can appreciate the benefit it has in learning how to move our bodies in an efficient way.  It helps to align the body in regards to mobility, strength and flexibility, which in turn prepares your body to operate exactly how you would like it to when you are in the boat.  It has a great role in preventative therapy to reduce the risk of injury,” McArthur explained.

But she was also quick to add that she was not there to replace the team’s brilliant physios, who will re-join the team, when more formal training routines will start again from July.

“I wanted the benefit to be purely social and team building.  I came out initially and told my team mates that I wasn’t here to be their physio or step on the toes of their current support system, but to just provide a basic level activation and mobility exercises beneficial to the general population,” McArthur said.

Nevertheless, she enjoyed sharing her knowledge with the team and took a lot away from it – including lots of fun and laughs.

“Pilates can often be a nice way to end the week and re-set for the following week.  Not even to mention the required attention our bodies needed with little access to our usual physio and massage, and our curious nature of trying other sports that we are not built for,” McArthur laughed, referring to some of the side-effects cross training including home gym, mountain biking, running, climbing, cycling and other things had brought about for the paddlers during lockdown. 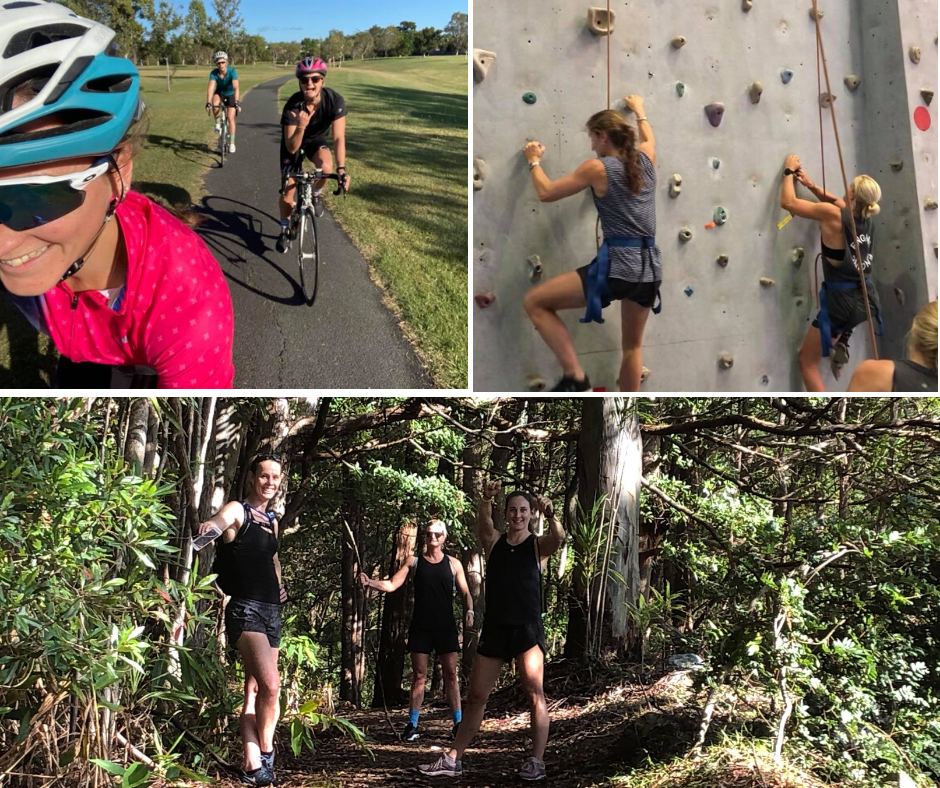 And of course the banter made it even more fun.

“Getting all the girls on the screen and seeing how warmly dressed some were, e.g. our SA and WA athletes, versus our ‘singlet and shorts’ attire on the Gold Coast was as simple as it had to be.  Handing out banter to some athletes about the room in which they tuned in to, to pointing out who was the most flexible, to who did the weirdest bit of cross training that week, to who baked the most cakes – that was what it was all about,” McArthur said.

About the take-aways she added, “I gained a lot of confidence getting to take the girls through the sessions.  My skillset in the kayak isn’t hidden and is known to the world, however I have felt I have been able to hide and keep my professional life quiet, so coming out and showing the girls some of what I do was quite daunting to say the least.  But of course, they were troopers! Even when I mixed up my left and rights, they were there to make jokes, not judge.  I love them!  Even though they don’t always listen to instructions and flexibility is not a strong point,” McArthur laughed.

And will the sessions continue building their global reach?

“It was so awesome to have Jess and Linnea reach out after some of the posts I made on social media.  Asking to join in was a real confidence booster and we love having others join in! The more the merrier, right?!” McArthur laughed.

A sentiment echoed by Reynolds, who spent her isolated training sessions listening to many podcasts and baked a lot of banana bread over the last couple of months, but found the connection through Zoom very valuable.

“Even after COVID and our kayaking career, finding the way to connect through these mediums is a nice way to stay in touch with geographically distant friends.”

To zoom or not to zoom, might only be one of the questions moving into post-COVID-times, but there are many more learnings and positives to take away from the last couple of months, which will be worthwhile remembering as we move into the ‘new normal’.

“I have discovered that we all have a lot more resources already available to us than we think.  We are incredibly resourceful humans and we are also driven athletes, so if we believe that there is something out there that is missing and something that would add value to our lives, then we find it,” McArthur said.

“Whether it be a form of weight to make our home gym session heavier and harder, a Zoom call to allow us to feel social, or a team mate who is a physio to help us get that peachy booty, we can find a way to get it done.”