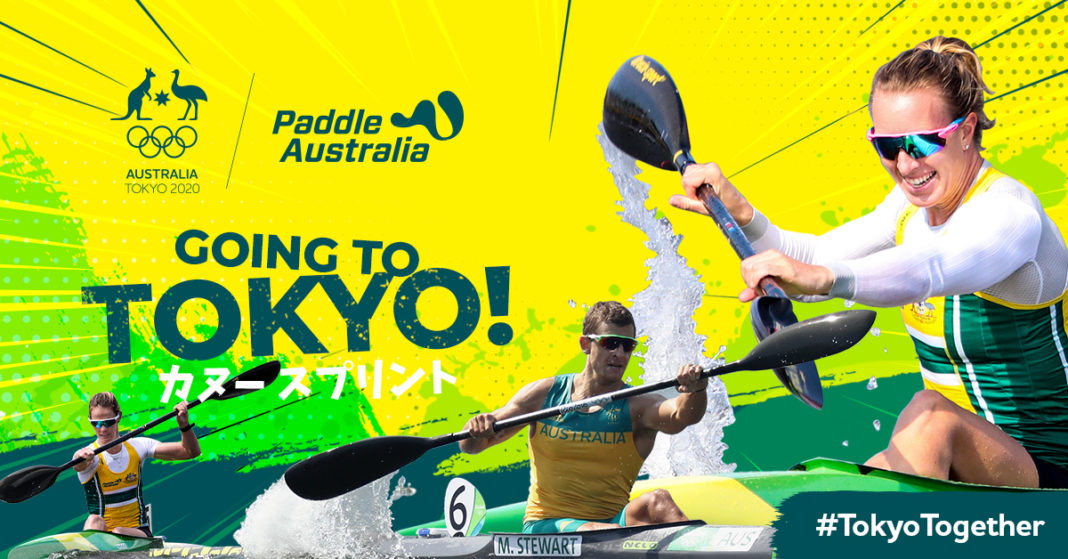 Fourteen canoe sprint paddlers have been officially selected to the Australian Olympic Team, becoming the first athletes selected since confirmation of the Games postponement until 2021. The Australian Olympic Committee has confirmed selected athletes shall remain members of the Australian Olympic Team to Tokyo, and athletes who have completed the entire qualification process, under the existing National Federation nomination criteria and international qualification systems, shall be nominated and selected in line with the existing policy.

With the Canoe Sprint athletes earning their nomination at Paddle Australia’s selection trials held in February and March this year, the fourteen athletes were officially selected by the AOC, securing their places on the Australian Olympic Team for Tokyo. “Athletes, like communities right across the world right now, are facing uncertainty about what the coming months hold,” Mr Chesterman said. “But I’m delighted that these athletes have some certainty knowing the Games will be held in 2021 and that they are now part of the Australian Olympic Team.

“These athletes have worked so hard for years for this opportunity and the fourteen paddlers announced today will continue the fantastic Olympic legacy our country has in Canoe Sprint in Tokyo next year.

“The calibre of these athletes both on and off the water is something Australians can be proud of. With a team including paramedic Jo Brigden-Jones and firefighter Aly Bull, clearly their impact goes beyond sport to keeping our communities safe, a role that is vital right now.

“Today’s selection is a fantastic achievement and we’re proud to have you on the Team for 2021. Those back for a second and a third Games are taking a special place in Australian Olympic history. Maintaining excellence over such a long period is exceptional.

“I thank Paddle Australia, all the coaches and support staff and the family and friends who stand alongside these athletes to allow them to do what they do. “ “It’s been such a rollercoaster of emotions, from qualifying at the trials, to not knowing if the Games would be cancelled, the official postponement and now being officially selected,” Brigden-Jones said.

“It’s such a high to qualify and I’m so proud of fulfilling a goal I’ve had for so long, but what’s happening around the world is so scary. Postponing the Games was the best thing to do for the health of the world.

“As a paramedic I have a frontline perspective of the current situation – while my Olympic dream is on hold for now, the delay means I can throw myself into my paramedic work for the next few months to do everything I can.

“It’s a different motivation to what drives me when I’m on the water, but if we can do our best to follow health advice and come together as a community we can get through this and the entire community can be back chasing our other goals as soon as we can.”

Queenslander Tom Green is the youngest canoeist on the team, with the 20-year-old set to make his Olympic debut after dominating the nomination trials. “This is a dream come true,” Green said. “I’ve hoped to make an Olympics since I was just a kid, to have it come true is an incredible feeling.

“From looking up to Olympic champions like Kenny Wallace, to getting to train alongside him and learning from the entire team – athletes, coaches and support staff – I couldn’t ask for a better learning environment. Everything I’ve been able to achieve is purely down to the coaching, support, advice and encouragement from the paddling team.

“The postponement is definitely the right call, what’s going right now is much bigger than sport and needs everyone to work together to get through it. I’m looking forward to seeing the world come through it and being able to come back on a level playing field at the Olympics next year.

“I think athletes around the world are going through the same thing – we’re used to going 100 miles an hour and we’re down to zero, but I’ll take the time for some much needed rest, will work out at home and just take the best advice from our coaches and support staff over the coming months. I’ll be more motivated than ever to be at my absolute best for Tokyo next year.”

“We are very proud to see a full team of Canoe Sprint paddlers selected for Tokyo 2020 and are looking forward to seeing them in Tokyo next year,” Ms Quitty said. “It’s a very exciting team that includes Games debutantes, London and Rio Olympians, Olympic medallists and for the first time ever our women canoeists.

“We are very fortunate to have such an exceptional mix of experience and young talent on the team. There are challenging times ahead for all of us but we know our athletes will continue to strive for success with the same resilience and strength that they have shown in securing their Olympic team places. Congratulations all and we are looking forward to celebrating with you and the rest of the world when we get to Tokyo 2020 next year. ”

*Note: specific events each athlete to compete in at Tokyo determined at later date

Find out more about Canoe – Sprint at the Olympics in the infographic below.