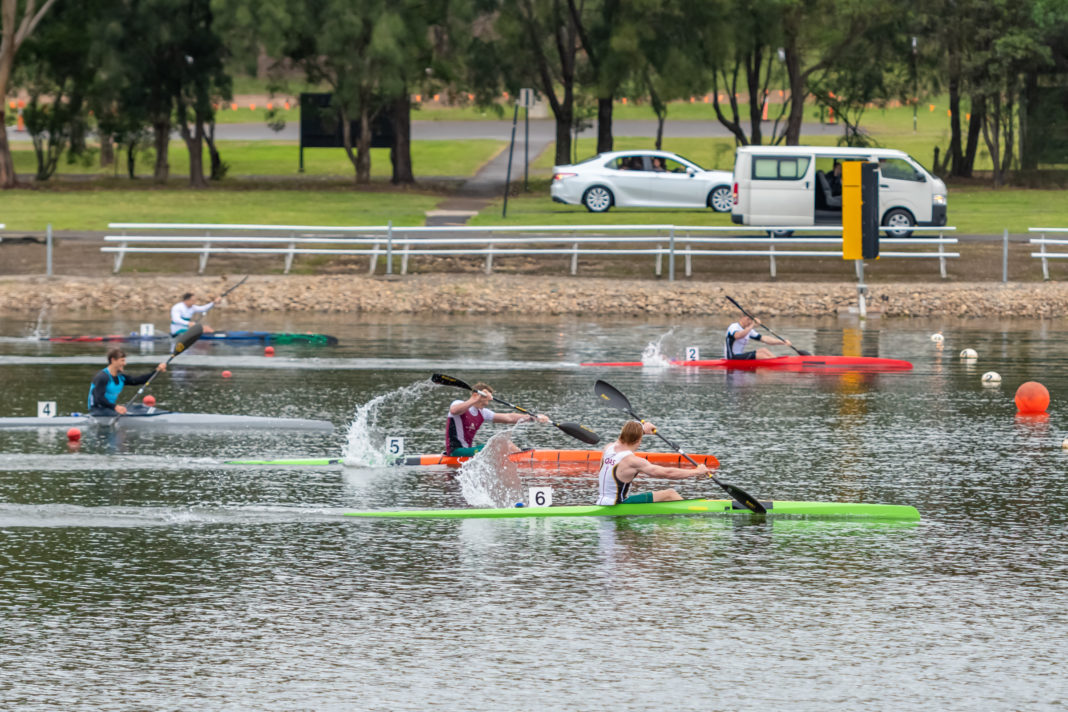 With only one day left of racing, selections trials peaked on the penultimate day of the 2020 Paddle Australia Canoe Sprint Championships with the event doubling up as the final Olympic canoe sprint as well as national team selection trials.

But that was of less concern for both Alyce Wood and Tom Green, who already locked in their provisional spot for Tokyo 2020 a couple of days ago after Wood won the women’s K2 500 together with fellow Rio Olympian Alyssa Bull on Thursday and after Green took home the win in the men’s K1 1000.

Olympic selection racing still continues until Sunday, 15 March before Paddle Australia selectors will nominate athletes to the Australian Olympic Committee for final selection. Pending all official processes, teams are expected to be announced over the next two weeks.

Olympic Events – Men
The semi-finals of the men’s K1 500 kicked off racing on the penultimate day of the canoe sprint championships and a couple of hours later, Tom Green secured another gold medal and national title in a red-hot final. 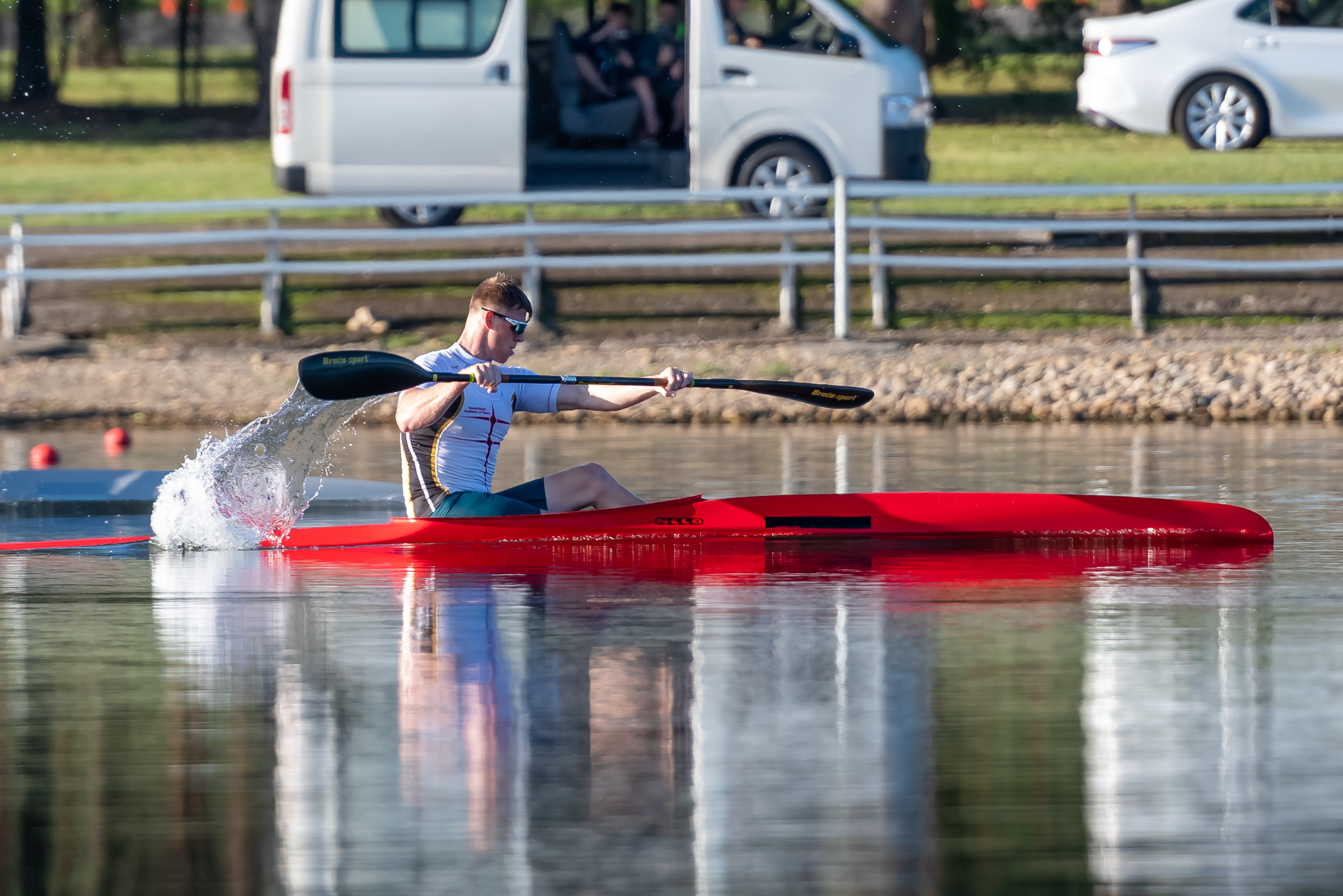 With Jean van der Westhuyzen and Tom Green finishing second in yesterday’s men’s K2 1000 final and winning the K2 at the first round of selections, like Green also van der Westhuyzen has provisionally secured his ticket for Tokyo 2020.

Ahead of the final day of racing on Sunday, also Jordan Wood and Riley Fitzsimmons have been provisionally nominated for their Tokyo spot. 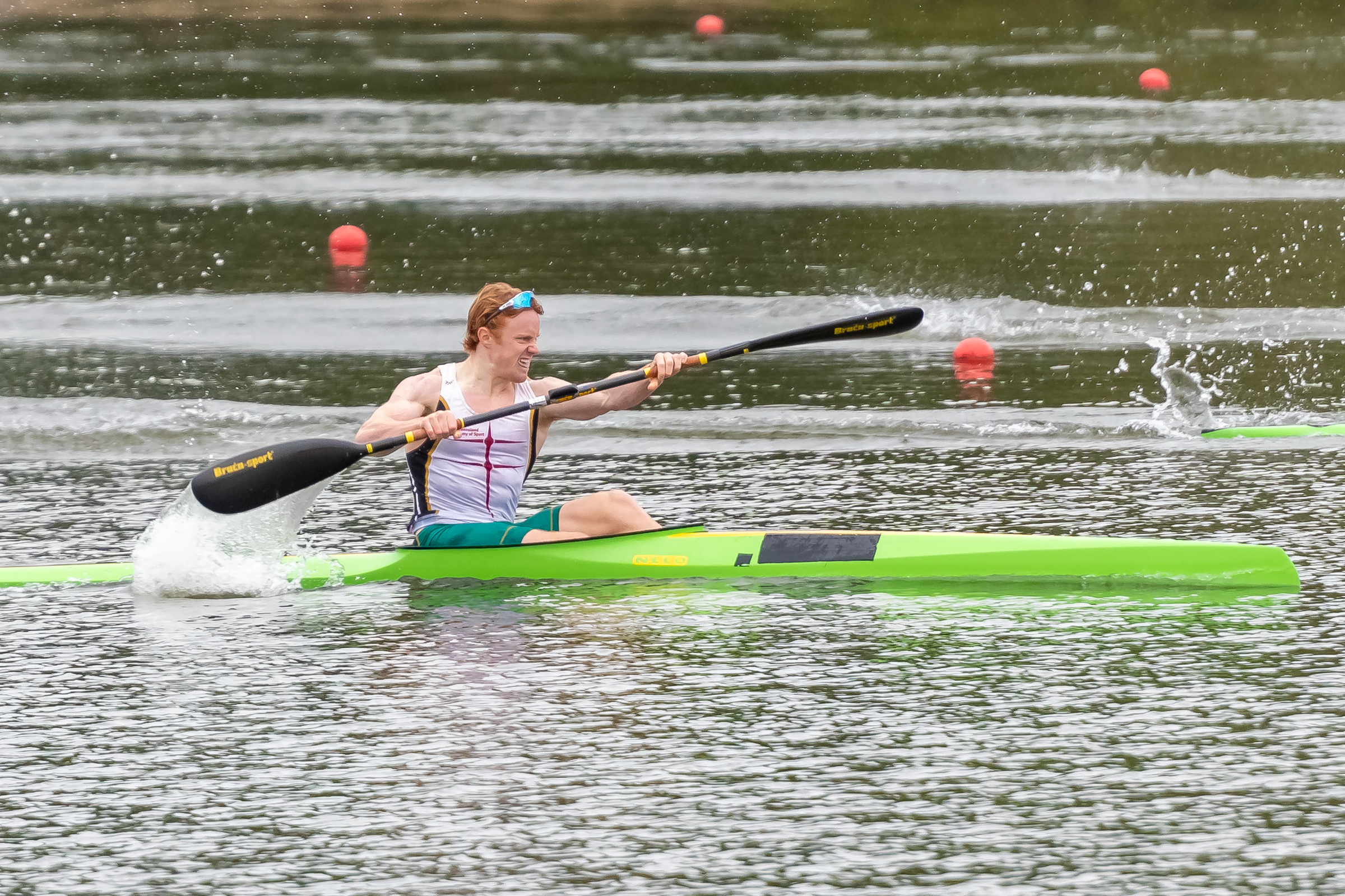 “This was another race to have another shot at provisionally confirming my spot in the team and it was nice to get out there and have another solid with the boys. I got the provisional spot yesterday so this race still mattered but it wasn’t super, super important for me but to go out there and race well is important,” van der Westhuyzen said.

And asked about selections and being provisionally nominated for his first Olympic team, van der Westhuyzen added,

“It really hasn’t sunk in. I think it will in the next couple of days but it’s a childhood dream come true for me. Also, the next phase of training is coming up and we put in a lot of hard work to ensure we get the best results at the Olympics. I’m super, super excited but I’m also excited for the hard work that comes now in the second phase of training.”

Olympic Events – Women
In the women’s kayaking events Rio Olympian Alyce Wood locked in her fourth K1 500 national title after winning the event at every national championship since 2017.

“I think I’ve won the K1 500 every year since 2017, so this must be the fourth time, I guess. It’s definitely pretty special to win against the amazing group of girls I train with every day and I’m never complacent; your past results never really count for much. Whatever happens out there is what counts on the day and I’m very happy to come away with the win,” Wood said following her win. 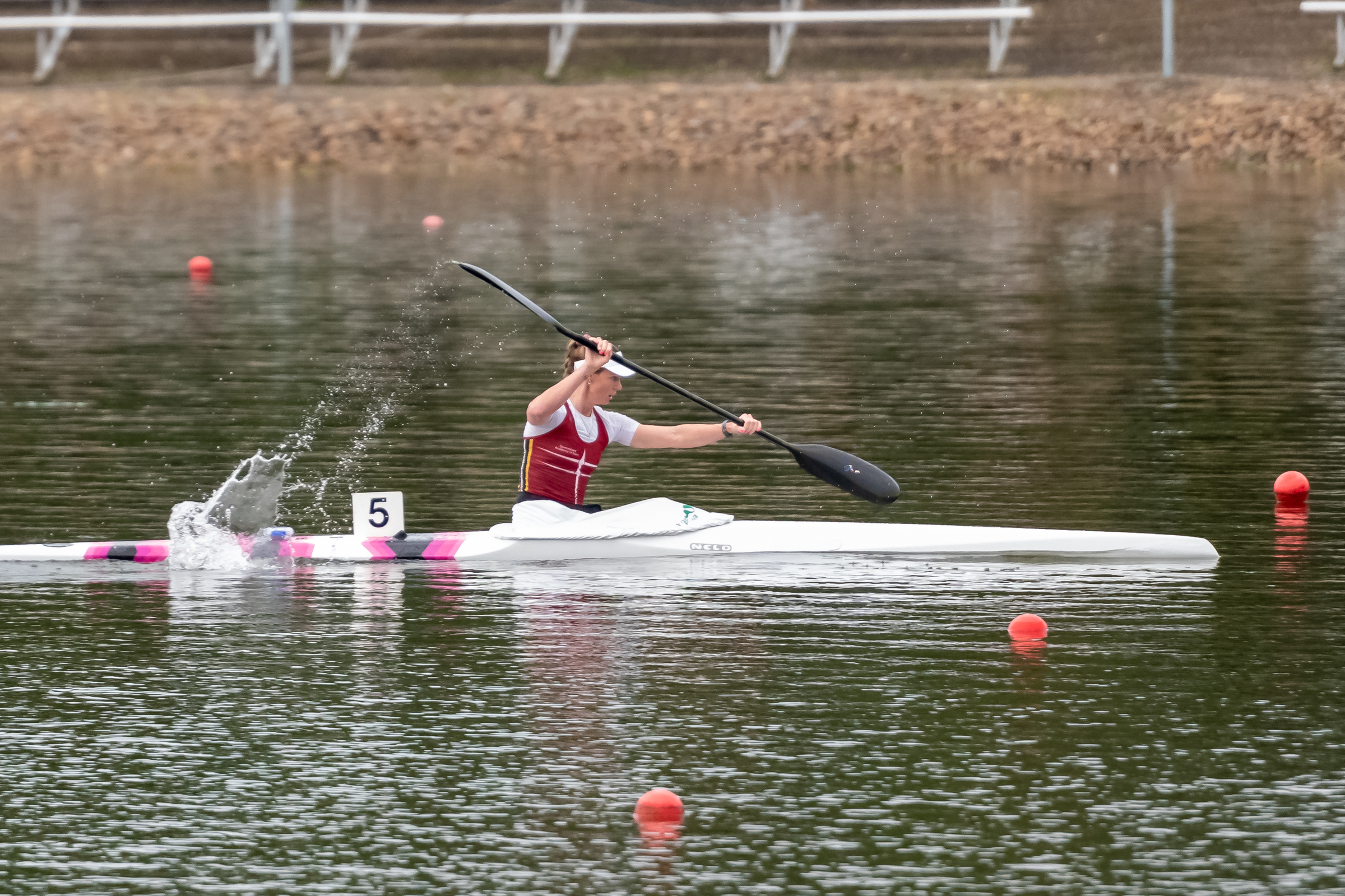 “Coming into this weekend’s regatta, I came in with the win in the K1 and the K2 at Oceania Champs (first round of selections, 14-16 February) but I wanted to back that up again. There’s a lot of pressure on it and it’s quite hard to go into this as the favourite. Everyone is chasing you and you got a lot to lose and everyone has a lot to gain. It’s definitely a different pressure racing domestically than internationally in that sense,” Wood added, who together with Alyssa Bull has been the front-runner across the women’s events this season.

The individual win backed up her strong performance from Thursday in the women’s K2 500 with Alyssa Bull(QLD) when the pair won the national title in the class and provisionally locked in their spot for the Tokyo 2020 Olympic Games in the process.

Wood, who also won her K1 semi-final in the morning, took out the win in a time of 1:53.88 and +0.51 seconds ahead of London Olympian Jo Brigden-Jones (NSW). Alyssa Bull finished third. 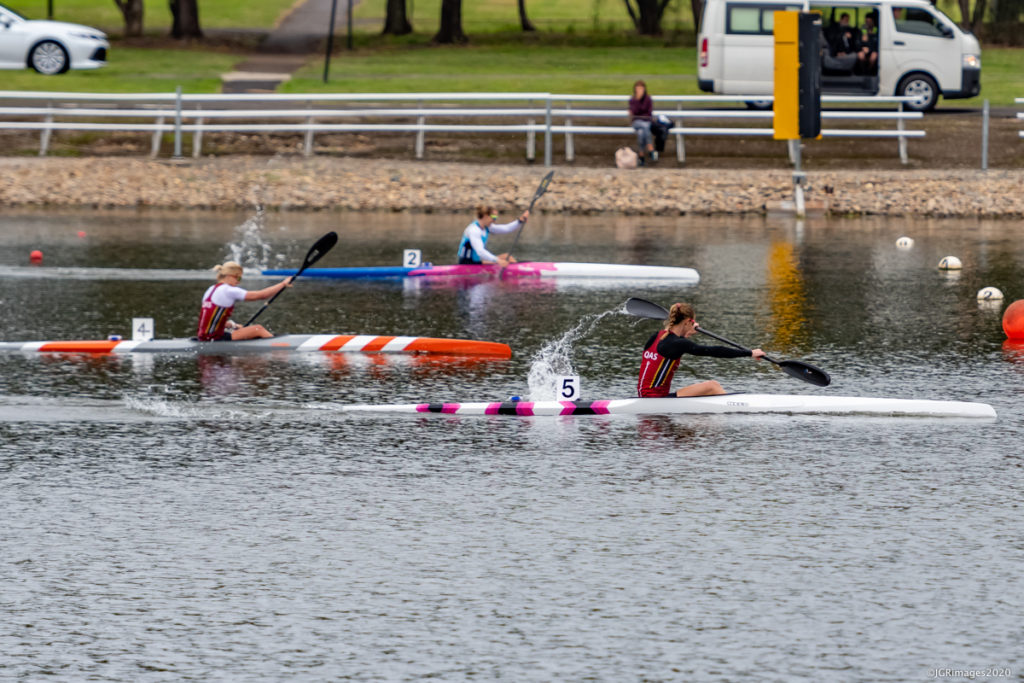 As a selection event, all rankings were of relevance with South Australian Cat McArthur finishing fourth ahead of Western Australians Shannon Reynolds and Jaime Roberts in fifth and sixth respectively.

“I had a really good heat and semi and I needed the confidence to come into this final. I obviously want to be first, second or third, but fourth is ok and I’m really happy with my performance today,” McArthur said.

“These are our main Olympic selection events and hopefully I have done enough to get my spot on the team. I moved to the Gold Coast two years ago to train with girls like Alyce and Alyssa and day in and day out they are my inspiration. It’s a really good training group and they welcomed me with open arms and I hope that forward from here we get to continue and keep pushing each other,” McArthur said with selection racing to wrap up on Sunday. 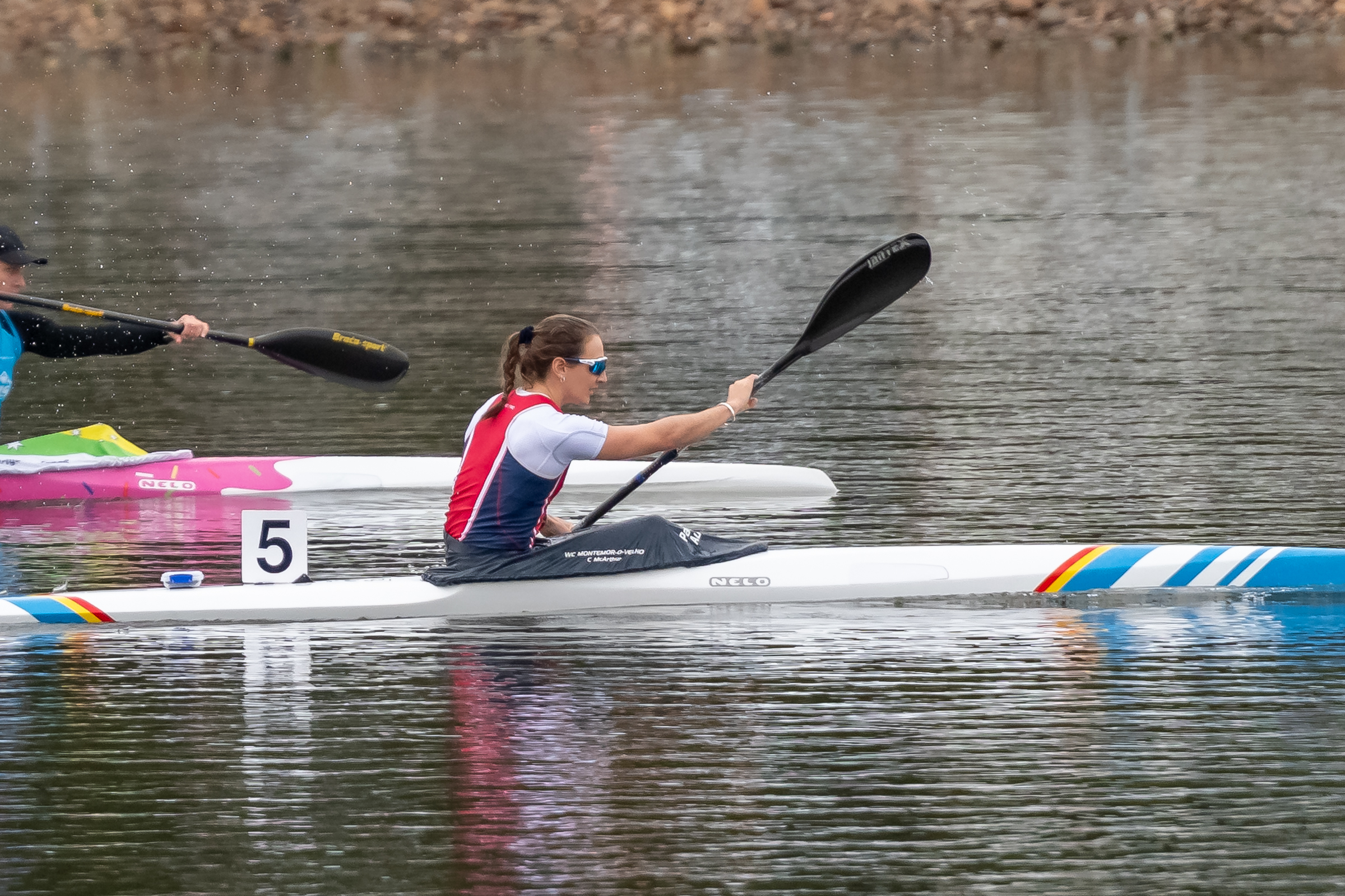 Other Events
The 2020 Paddle Australia Canoe Sprint Championships also double up as the selection event for U23, Junior, Asia Pacific and Olympic Hopes team and despite challenging conditions on a cold and wet day, everyone put in a strong performance.

In the under 18 women’s events, Sydney Northern Beaches paddlers Alisa van der Kwartel and Sascha Taurins secured a win in the women’s K2 500 and the pair was over the moon with their performance.

“We went out there not even thinking about getting a win and then we raced as hard as we could and when we crossed the line we were just stoked. We were not expecting something like this. To come out with a win is really amazing and it just boosted our confidence so much. We only got together a month ago for nationals and we just got out there and put our hardest effort in and powered down. It was a really important event and this puts up really high up,” an excited Alisa van der Kwartel said after race with the event also relevant for Junior Team selections.

“We were a bit slow off the start but kept digging and we were ready to collapse at the end.
We weren’t really thinking about it (Junior selection). We just wanted to go as hard as we can,” Sascha Taurins added. 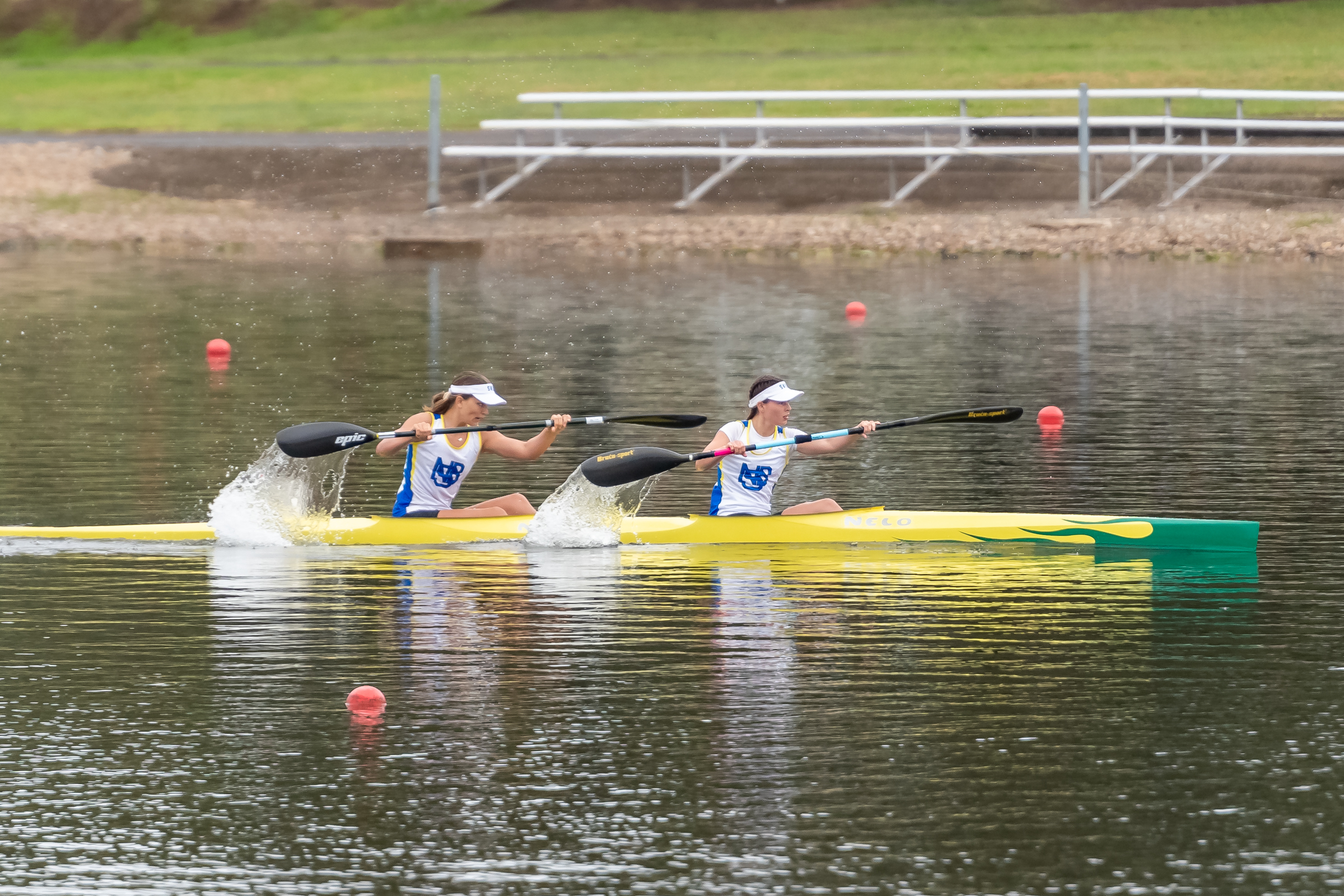 The pair had a strong regatta so far, also taking second place in the women’s K2 1000, winning the K4 1000 together with club mates Hanako Greuter and Nicci Vesely, while Alisa van der Kwartel also came second in the women’s K1 200.

Taurins also took out a third place in the under 18 women’s K1 1000, which was won by Jenaya Massie with Jasmine Locke in second.

It is the first Australian championships for former South African paddler Pierre van der Westhuyzen and he was thrilled to take home some medals.

“This is my first nationals and I’m really happy with my results considering my preparation and I just came out here and gave it a crack and I’m happy with what I got done on the water,” Pierre van der Westhuyzen said.

“I got my first Aussie medal the other day and I was pretty chuffed with that. It was a gold in the K4 200 with the NSW boys and then yesterday (Friday) I did the K1 1000 A final and I got a silver in that which I was really happy with. And today I got a silver in the K1 500 too, which is pretty good,” van der Westhuyzen said about his results. 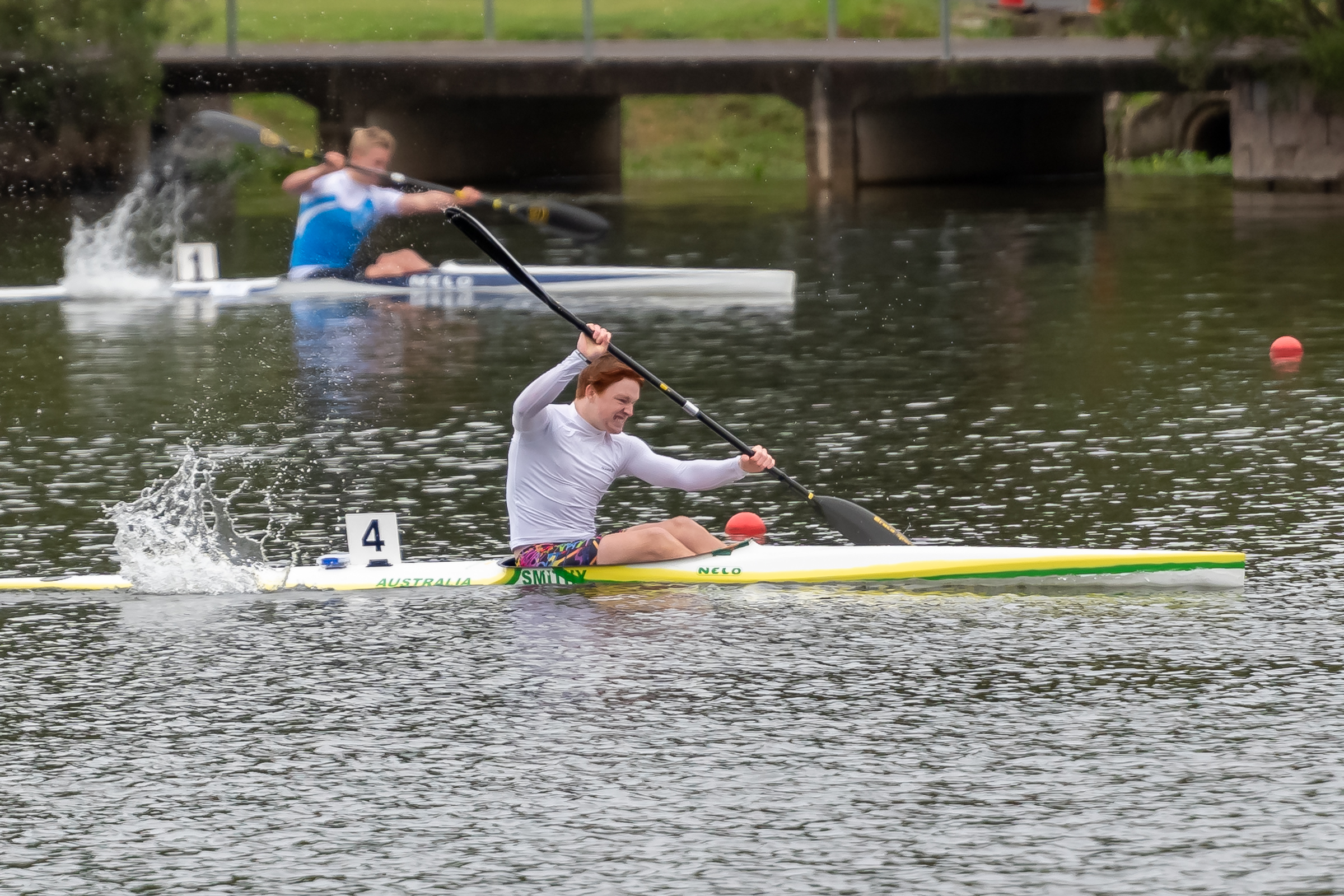 “My brother has been doing well in the sport and has quite a bit of experience overseas and just having him around in the house is the motivation to get up in the morning and to go to training. It makes it that much easier and it’s great having him around in racing situations to get a little tip from him here and there, which is really, really awesome,” Pierre van der Westhuyzen added about competing at the same event as his brother.

In the under 16 women’s events Avoca Kayak Club paddler Natalia Drobot (NSW) continued her winning series and took home the win in the women’s K1 500 and K2 1000 together with Demi Bates (SA).

The 15-year old, who has only been paddling in kayak sprint events since just over a year and a half so far has won every one of her races.

“I thought about Olympic Hopes and Asia Pacific teams and I would love to make both of those teams,” Drobot added with selections in mind.  “I came across from surf lifesaving and I wanted to join kayaking as a gateway to skis but it’s taken over,” Drobot laughed. 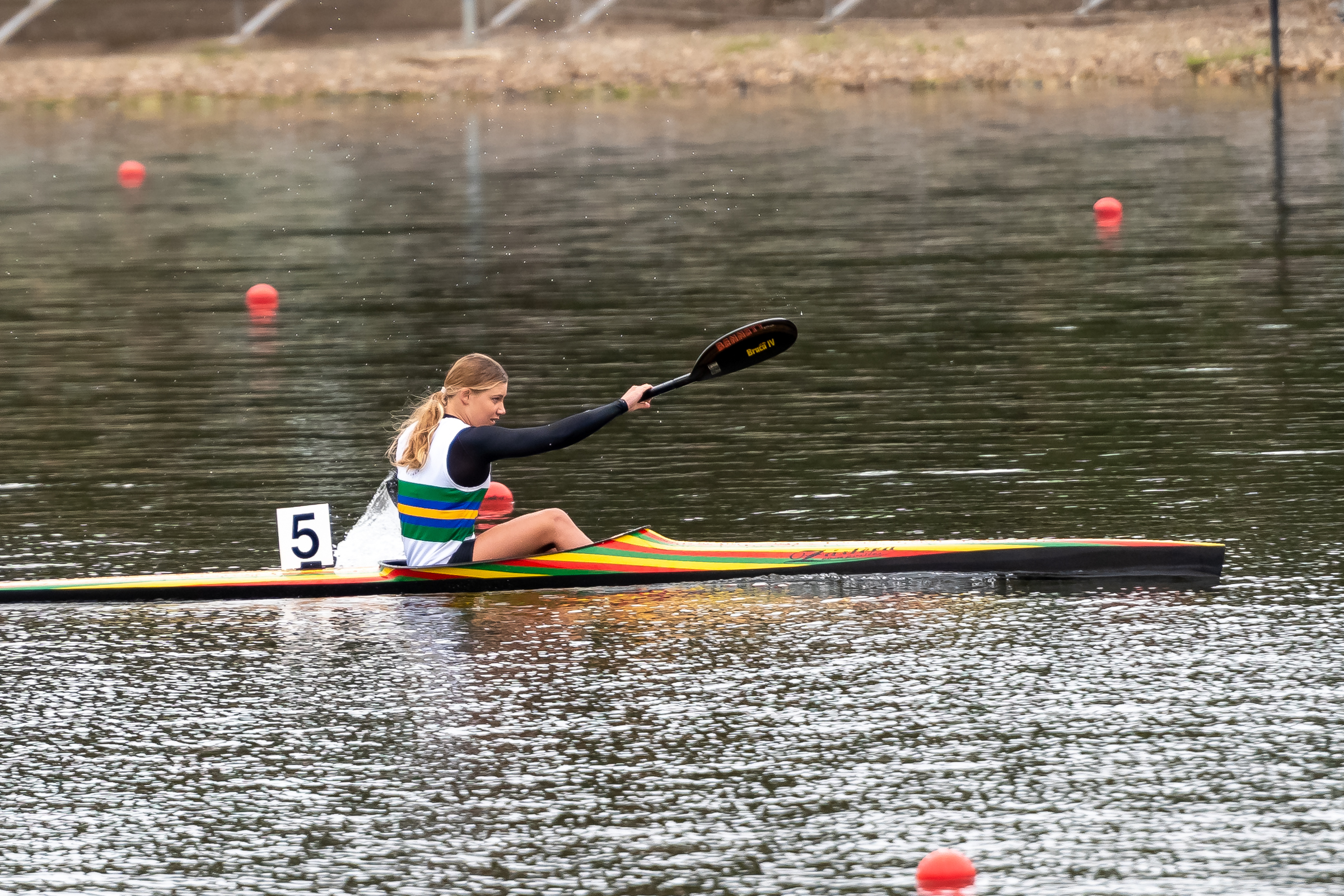 “It’s been a really good regatta overall and I’ve been doing pretty well this season and have been training really hard. In my singles I won the 200 and the 500 and in the K1 1000 I got third just missing out on second but I was really happy about how I went. Me and my mate Tim (Hyde) also took out the K2 1000 which we were really stoked about,” Hardwick said about his 2020 nationals and credits the motivation from competing overseas last year for his success this year.

“I was in the Olympic Hopes team last year and competed overseas which was an amazing experience and it just helped me to push myself to go harder this year and make it again, so it’s a good motivation for me to get back there. On my results, I feel I have a good chance to make the team so I’m pretty happy,” Hardwick said. 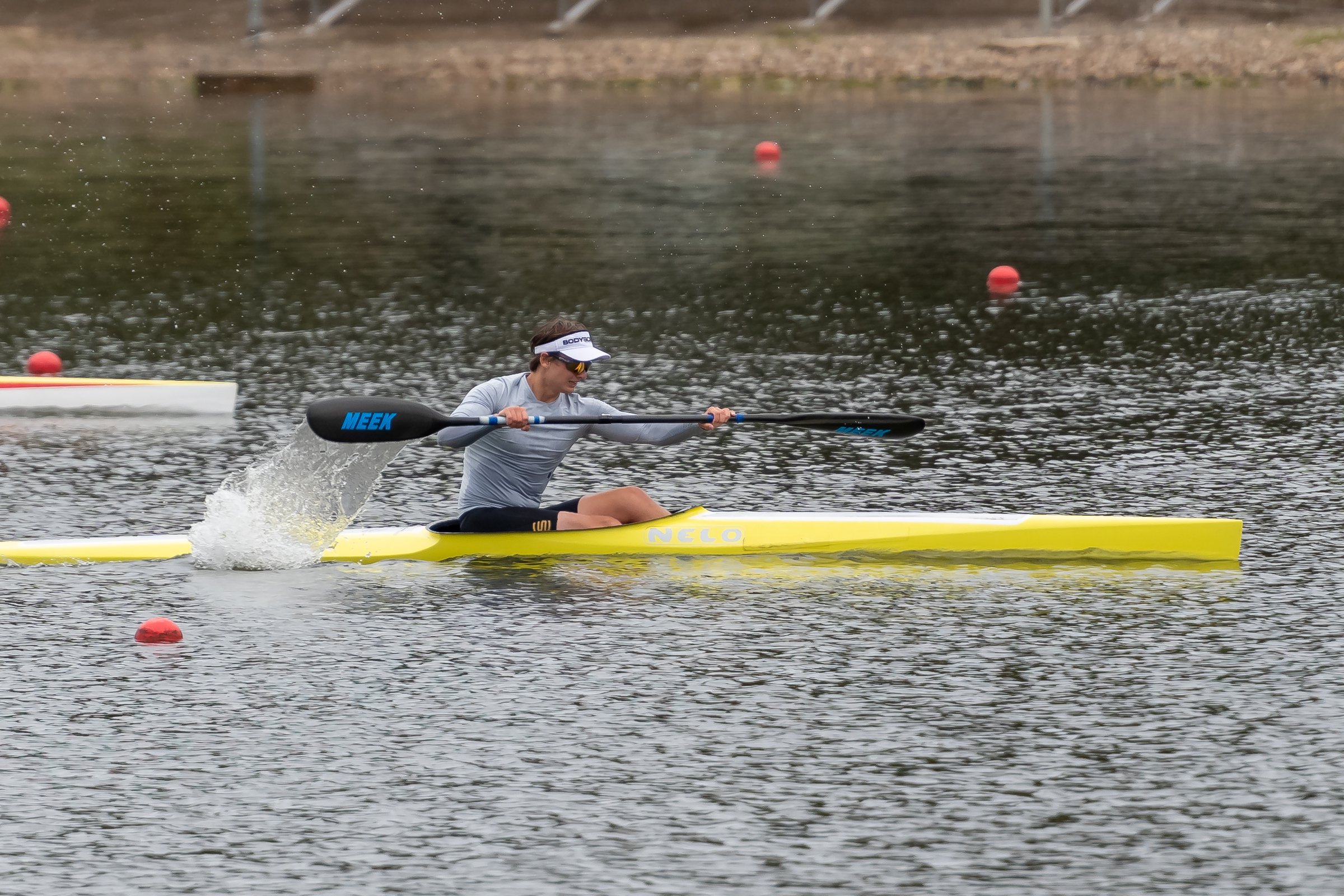 Racing concludes at Sydney International Regatta Centre on Sunday, 15 March 2020 with the final round of racing, including team boats and Interstate Events.