2020 Senior World Cup and U23 Team
The international ICF Canoe Slalom World Cup series is set to start in Ivrea, Italy at the start of June (5-7 June 2020) with World Cup 2 to follow in Pau, France mid-June (12-14 June 2020). Tokyo 2020 Olympic canoe slalom paddlers Daniel Watkins, Lucien Delfour as well as Jessica Fox, will be contesting the first two World Cups in preparation for the Tokyo Olympic Games and have also gained selection for World Cup 4 in Prague, Czech Republic (18-20 September 2020) and the World Cup final in Markkleeberg, Germany (24-27 September 2020).

Paddle Australia’s most successful canoe slalom paddler and dual Olympic medallist Jessica Fox, who will be contesting both the women’s K1 and C1 in Tokyo as well as at the World Cups, will be joined by sister Noemie Fox at the World Cups, who has also been named as the Olympic reserve. It is also the last year of U23s for the 22-year old, who is looking forward to focus on the U23 world champs this year. 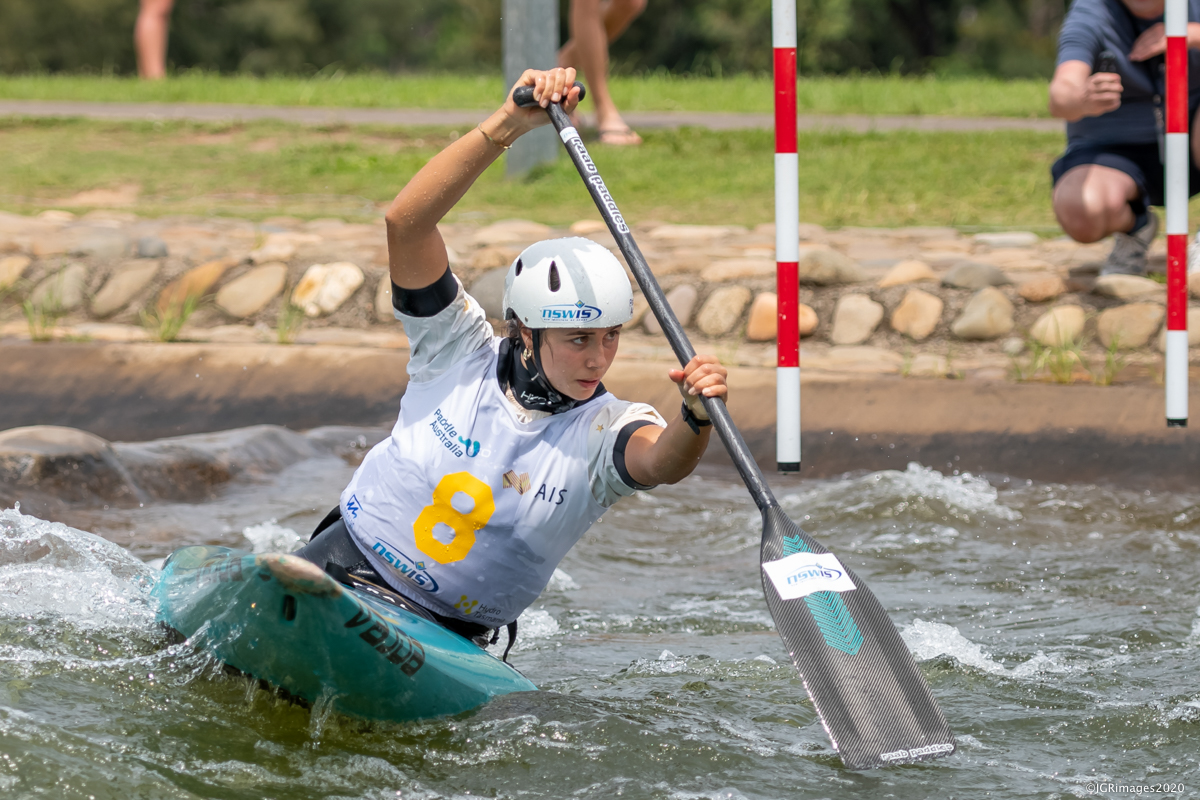 “It’s my last year under twenty-three and I am looking forward to do the world cups and the under twenty-three world champs and focusing on that. As far as the Olympic reserve goes, hopefully it does not come to that with Jess and I am sure I will be going to Tokyo as a spectator and support Jess as much as I can,” Noemie Fox said.

After missing the world cup team last year, Tasmanian Kate Eckhardt is back on the team in both events and together with Noemie Fox, Demelza Wall (TAS/WA – C1) and Georgina Collin (WA / K1) will also be contesting the ICF U23 Canoe Slalom World Championships.

“It is pretty exciting to be going to my last U23 championships and it is exciting to be back on the World Cup team because I missed out on that last year so it feels good to be back,” Kate Eckhardt said. 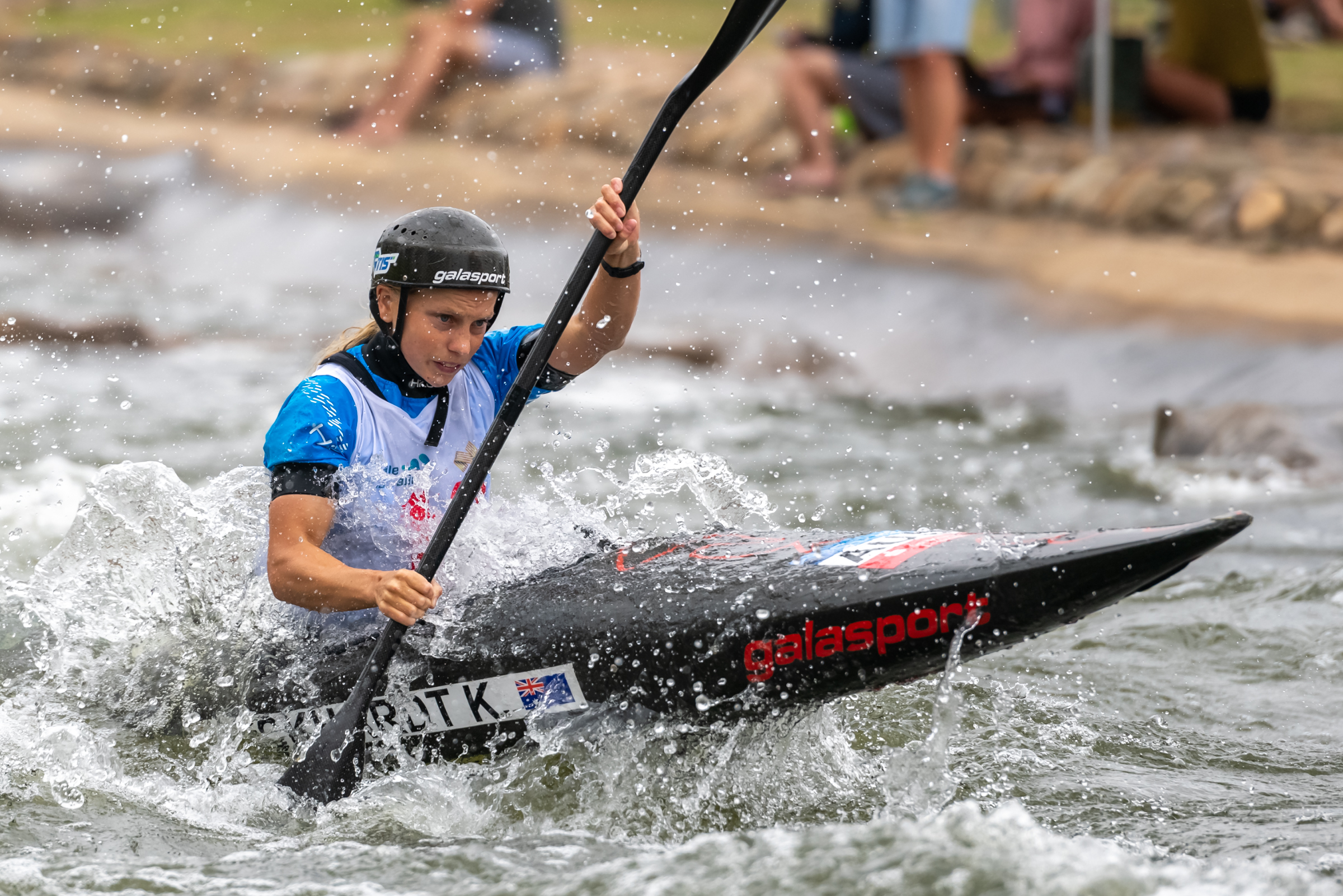 In the C1 men, Olympic Games debutant Daniel Watkins will be joined by Brodie Crawford (WA) at the World Cups, who has also been named as the Olympic C1 reserve. U23 paddler Tristan Carter (VIC) completes the C1 world cup team for the first and last two world cups with Carter also to contest the 2020 ICF Junior and U23 Canoe Slalom World Championships in Tacen, Slovenia in both the K1 and C1 (7-12 July 2020).

While selection to the world cup team is bitter sweet for those who did not get the Olympic spot, Australia’s world cup canoe slalom paddlers will work together to get the best performance for Australia overall.

“We are one team; we are the Australian team and we push each other every day and that’s how we improve. We got some really good guys coming through and a strong senior team so I’ll definitely be there ready to push Dan all the way to the Games and do whatever I can to do the best for our country,” Brodie Crawford said after missing out on Olympic selection, but making Senior World Cup team.

“Dan was the better man on the day in our selection races, but I had some good races and I came away with my head help up high,” the 23-year old added. 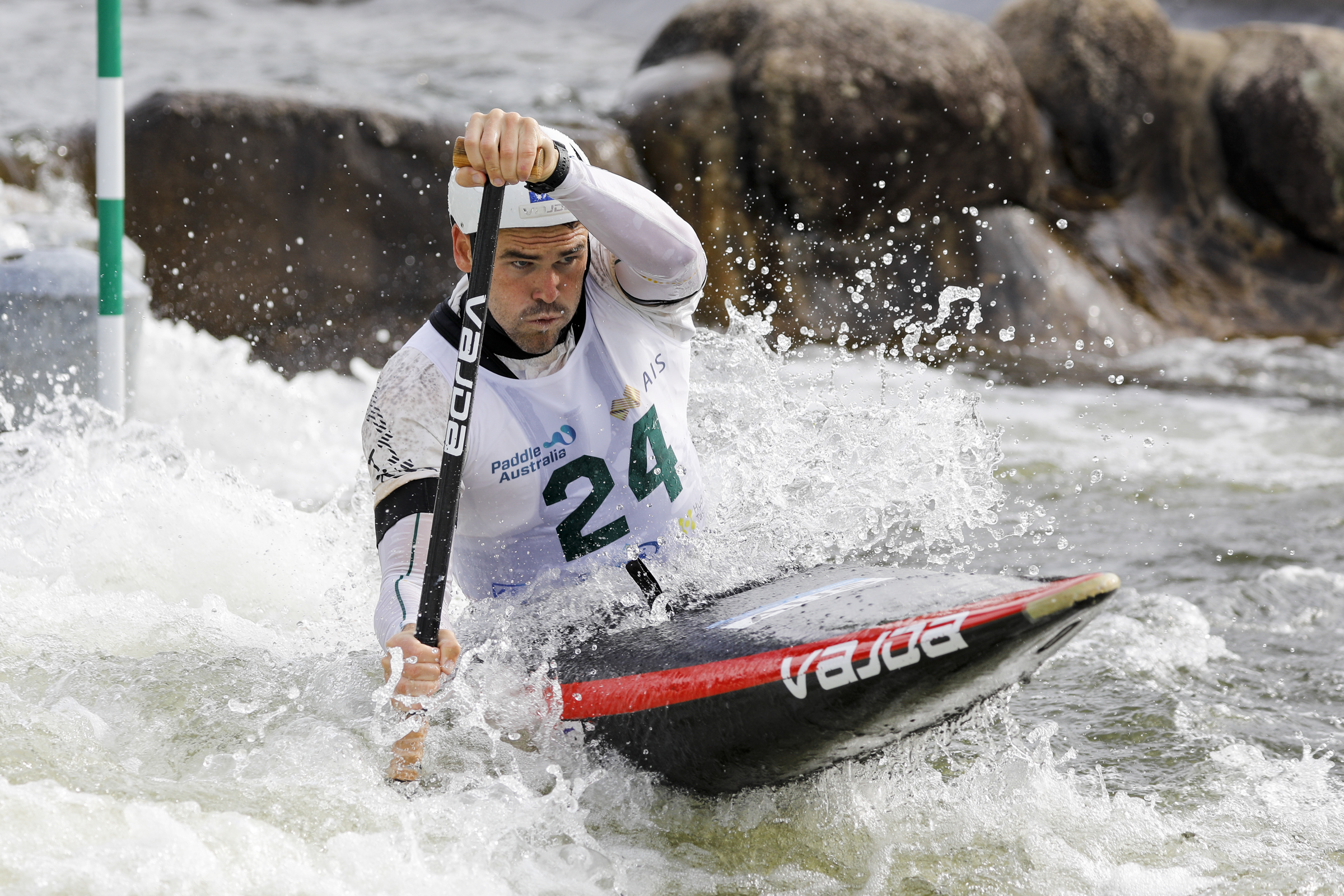 For the third world cup, Crawford will be joined by fellow Western Australian Steven Lowther as well as Victorian Kaylen Bassett, who made his first ever canoe slalom team and will also be contesting the U23 World Championships together with brother Lachlan Bassett.

Rio Olympian Lucien Delfour, who will be heading to his second Games in Tokyo, spearheads the K1 men World Cup team, with Daniel Watkins having the option to double up in both the K1 and C1 for the first two world cups as he will also be the Olympic reserve in the K1.

Western Australian Ben Pope is back on the World Cup team and will be contesting the first two, as well as the last two World Cups, while Tim Anderson (NSW) will contest the third world cup. Angus Thompson (NSW) is one of the K1 World Cup reserve paddlers and will also contest the U23 world championships.

“It was a pretty stressful final weekend of racing with Olympic and World Cup selection at the Australian Open but with the racing I’ve done at Oceania as well as at Aus Open, I managed to secure myself a spot in the world cup team and I’m very happy about that. Obviously, it is a bit unfortunate to miss out on the Olympics but saving grace,” Ben Pope reflected on the last few weeks of selection racing.

“The last few years, I’ve always been the fourth boat, the reserve boat for the senior team and this year I cracked the senior team, the world cup team of the top three boats, so that’s a really good start for the lead up to Paris,” the 26-year old added with his eyes already set on the next Olympic Games at Paris 2024.

The team to contest World Cup one and two will head over to Europe at the end of May.

JUNIOR TEAM
In the Junior category, Penrith’s Sophie Wilson once again impressed throughout the selection racing as the top ranked Junior paddler and will contest her second ICF Junior Canoe Slalom World Championships this year.

The 16-year old gained selection in both the women’s K1 and C1, while Victorian Georgia O’Callaghan will join her in the K1 on her first Junior team. 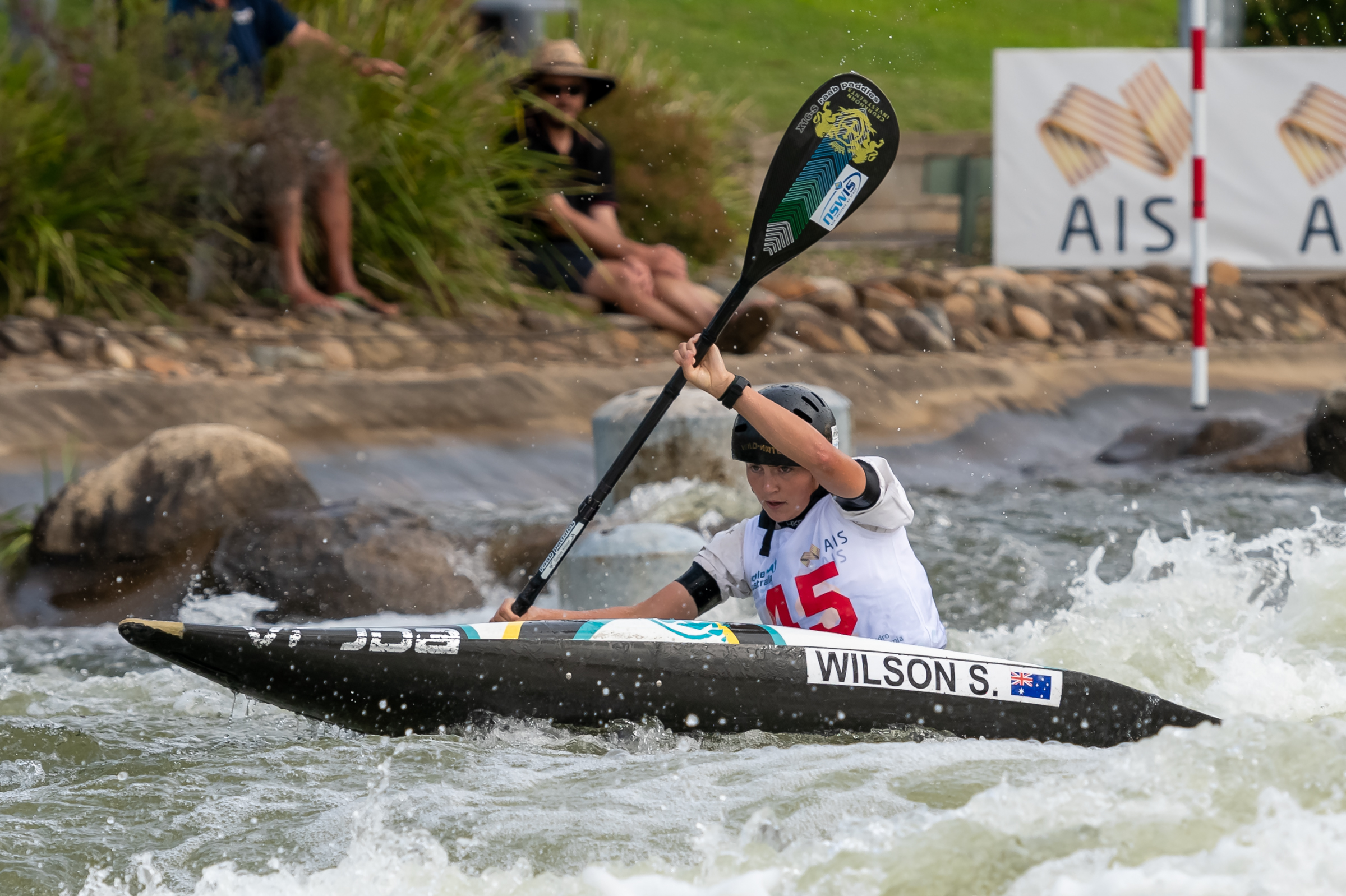 It’s been a really good round of selections. I’ve been having a lot of fun and it’s been really good to race the other girls. Everyone is really competitive,” Wilson said.

“It was really inspiring and encouraging racing and watching the world’s best at the Australian Open on our home course. It’s a great opportunity and I hope I can be one of them one day,” Wilson added after competing at the Australian Open, which saw over 250 athletes from 25 countries compete at Penrith Whitewater.

In the junior men’s events, Victorian Mark Crosbee returns to the team for the second time after topping both the C1 and K1 rankings.

“It’s been a really good series and I had some really good racing and I did what I needed to do and I’m really looking forward to what lies ahead. I will be paddling as hard as I can at the Junior Worlds and hopefully make the semi-final,” Crosbee said about the goals ahead. 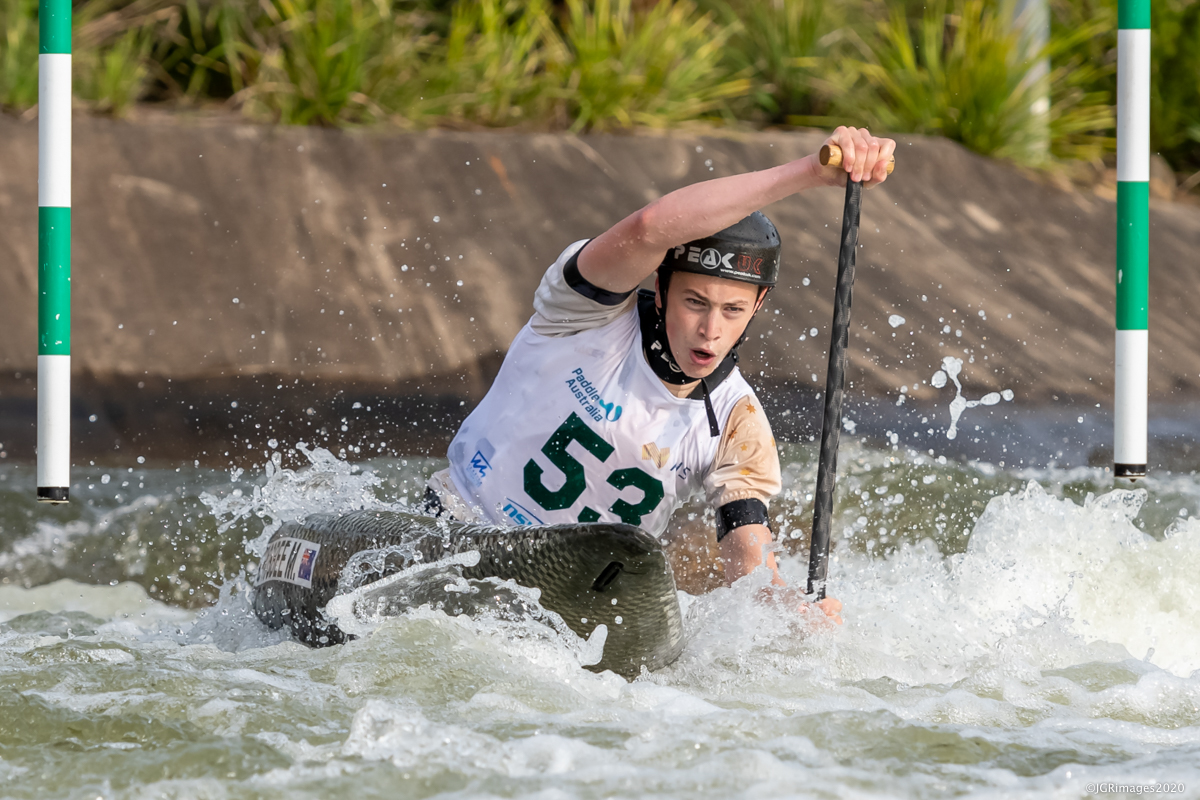 In the C1 men, he will be joined by new comers to the team Ben Ross (VIC) and George Pankhurst (WA), while Sebastian Montalto (VIC) and Hamish Dalziel (TAS) will also contest their first junior team in the K1.

“I trained a bit more this year and it is good to make the team. It’s a good benchmark for getting better later, for U23 maybe,” Hamish Dalziel said after making his first Junior Team.

The Junior and U23 team paddlers will have a couple of training camps at Penrith Whitewater Stadium in April and May before heading to Tacen, Slovenia at the end of June.

With canoe slalom teams now finalised, the attention will go to canoe sprint with next week’s 2020 Paddle Australia Canoe Sprint Championships (11-15 March, Sydney International Regatta Centre) the final round of Olympic, Paralympic as well as U23 and Junior Team selections with canoe sprint teams expected to be announced at the end of March.