Six months out from the Tokyo 2020 Olympic Games, Australia’s canoe slalom paddlers have kicked off the international season in style, winning all four boat classes and making it a clean sweep at the 2020 Oceania Canoe Slalom Championships in Auckland (1-3 February 2020).

Olympians Jessica Fox (NSW) and Lucien Delfour (NSW) made it a double golden wrap on the final day of the first international event of the season, with the pair winning the women’s C1 as well as the men’s K1 respectively.

On the final day of the event, Australia’s most successful canoe slalom paddler of all time, dual Olympic medallist Jessica Fox, once again showed her class, winning both the women’s C1 semi-final on Monday and backing it up with a win in the final a couple hours later. 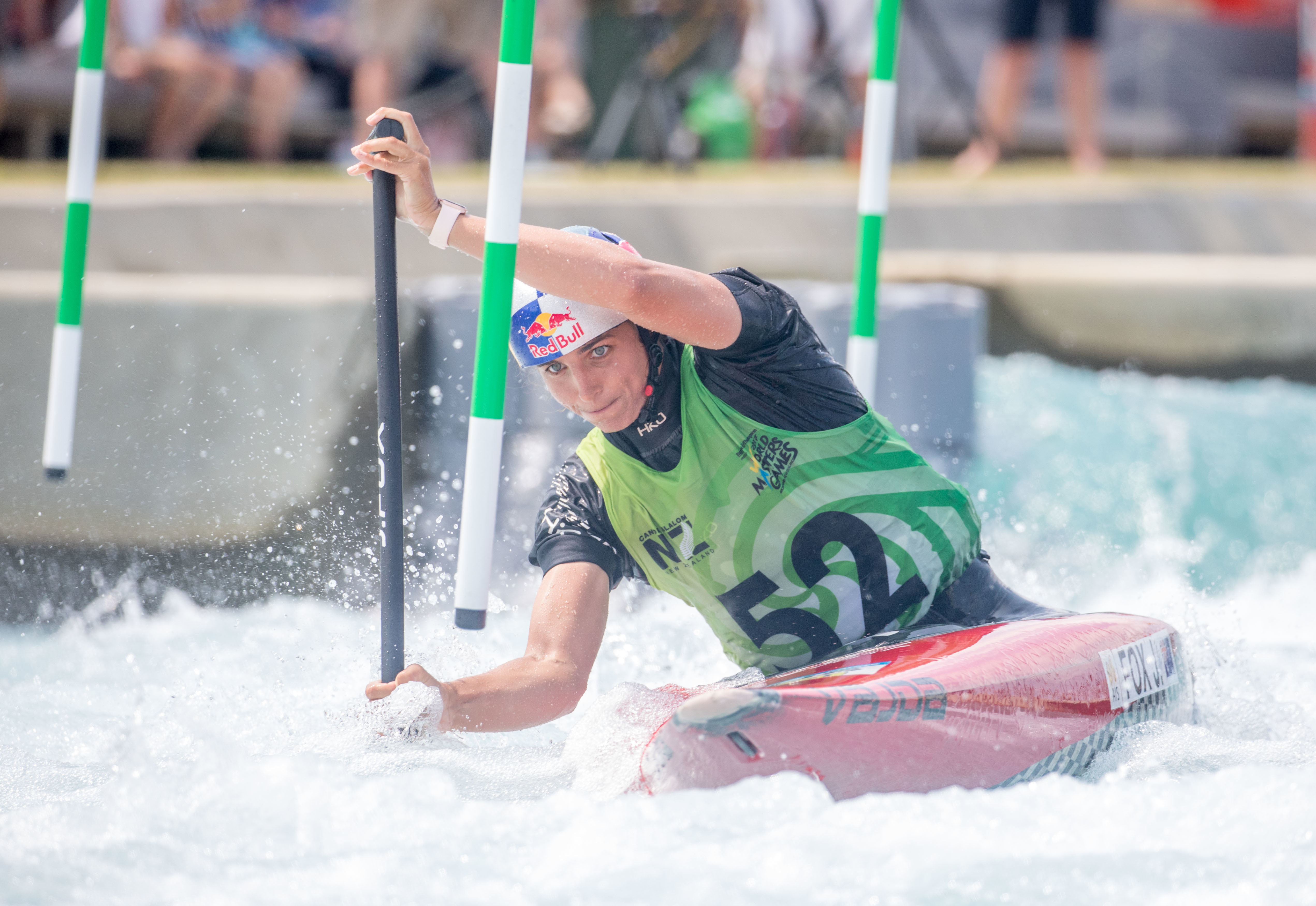 Fox put in a clean run winning in a time of 107.52 seconds and 5.08secs clear of Andorra’s Monica Doria Vilarrubla with Kiwi Luuka Jones third in 114.23.

“It was one of those runs that felt like a battle that I fought hard, the boat was running and I pulled off the moves that I was trying to do so I’m really stoked with that run. Yesterday, I had pretty good run as well and was absolutely exhausted, so I was pretty happy to come back today and put down some good runs,” Jessica Fox said about the physically demanding Vector Wero Whitewater course in Auckland.

Fox, who has already secured her Tokyo 2020 Australian Olympic team spot in both the women’s K1 and C1, relished the chance to cross the Tasman and compete against New Zealand’s top canoe slalom paddler and Rio Olympic silver medallist in the women’s K1, Luuka Jones, who finished third in the C1, but in the K1 was only +0.49 behind Fox.

“Luuka is such a strong paddler, this is her course so I knew I had to put in my best to try and beat her on her home course so it was definitely a tough battle. Like any race overseas that we are in we are friends off the water and then on the water everyone is trying to put in their best run and you compare the times in the end. But I’ve definitely had some great moments with Luuka – at the world champs last year and in Rio we shared the podium so it’s always nice to race against Luuka,” Fox added about the Trans-Tasman rivalry. 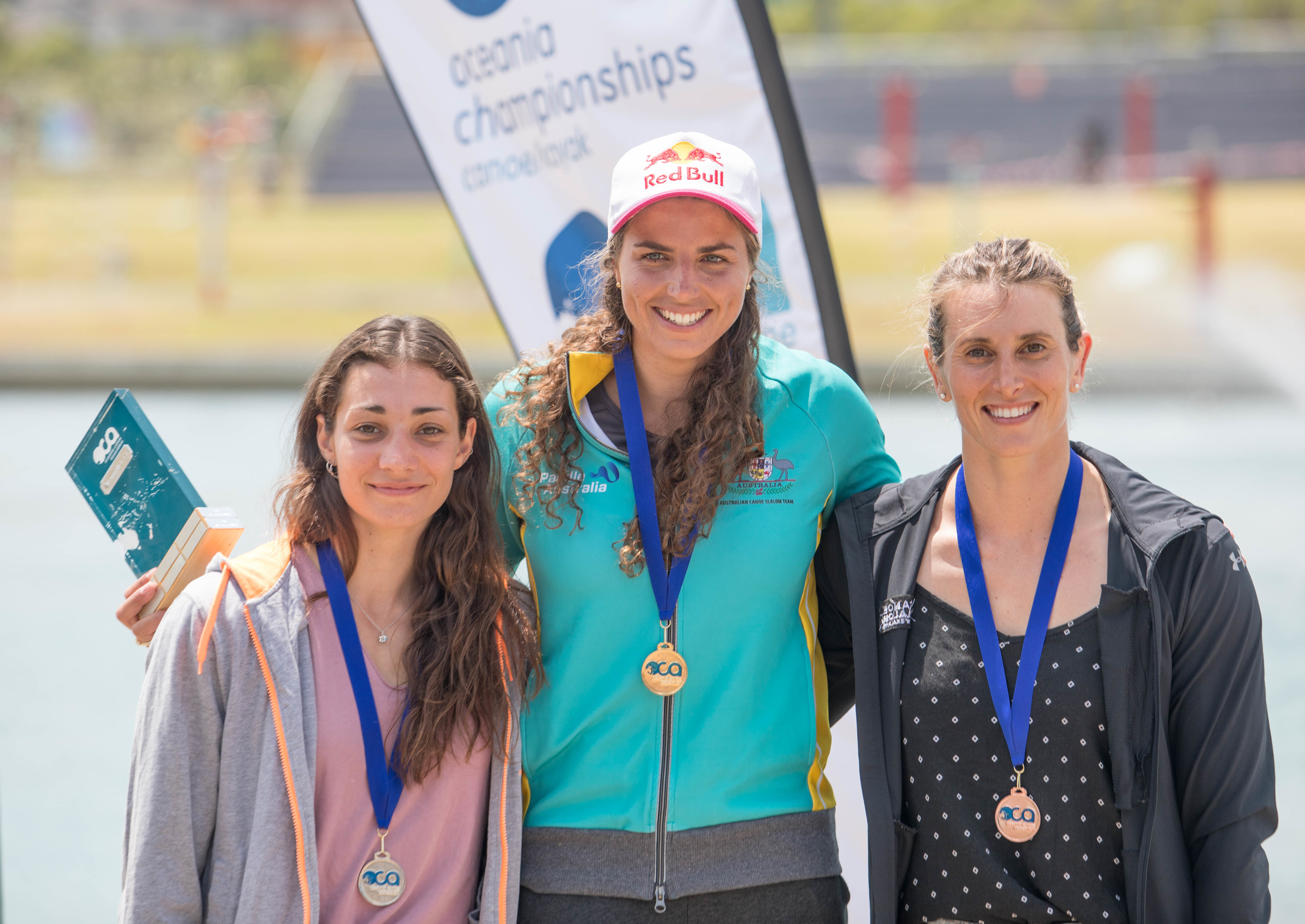 With the pair set to do battle again at the Australian Open as part of the 2020 Sydney International Whitewater Festival in a couple of weeks (21-23 February 2020), Jess Fox made the most of the event to train and try a few things without having to worry about selections.

“It’s been a good block training here and good racing. It’s a little bit different this time around because I gained Olympic selection last year at the world championships so I kind of had a bit more of a heavier preparation at this time of the year whereas normally this would be my selection trials,” Fox explained.

And looking ahead to the Tokyo Olympic Games she added, “We still have a few months to go to Tokyo but I’m definitely trying to learn from each training session and each race and it’s been good to see where I’m at compared to Luuka and some of the other girls. We have our international Australian Open in a couple of weeks and a lot of overseas athletes will be there and again it will be good to compare.”

For the three U23 paddlers, the weekend was the start of national team selection with the Oceania Championships doubling up as World Cup, U23 team and Olympic reserve selection. 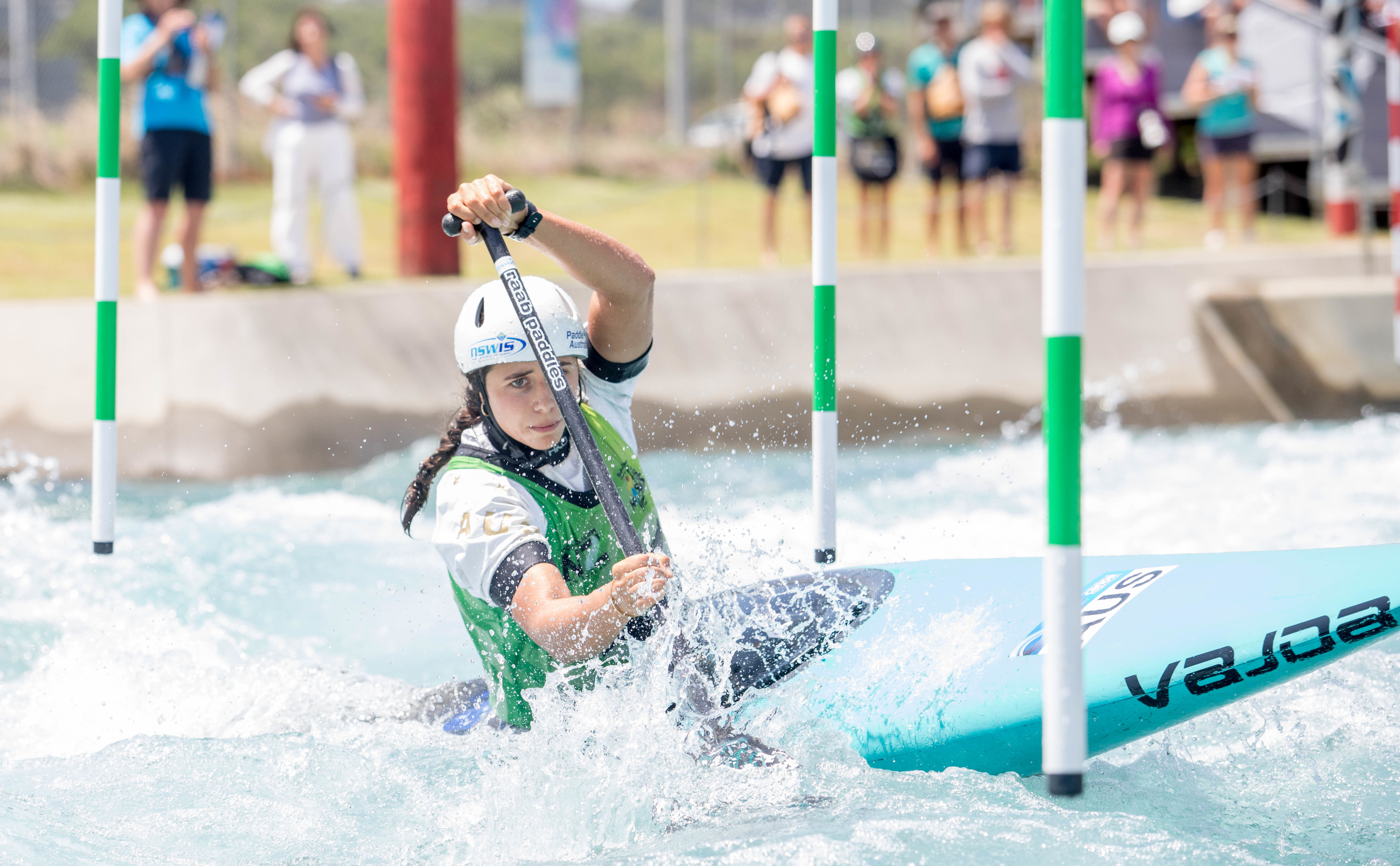 “This weekend was the start to our U23 selection, also for the Senior World Cup Team. Jess is already qualified but there are two more spots up for grabs and it’s also about the Olympic reserve. But it’s not even about that it’s a big international race and we had four C1 world championship finalists here and it’s just a really good event and it’s great to have that racing experience early on in the year,” Noemie Fox said about the calibre of the event.

“Overall, I’m not super happy with my paddling especially in kayak where I made lots of mistakes. The C1 was a solid run but there’s still so much time to get and it’s a really difficult course because it stop starts and stop starts so I didn’t have enough boat speed but it’s a solid run to finish off and I’m looking forward to going back to Penrith next weekend and then contest the Australian Open which is my favourite race of the year,” Fox added  ahead of the second and final round of national team selections on home waters.

In the men’s events, the Oceania champs signified the start of Olympic selection for Australia’s men’s kayak and canoe paddlers and Rio Olympian Lucien Delfour made the most of his chance on Monday, setting an early mark in the men’s K1 and taking home the win in a blistering run and world class time. Delfour blasted the Vector Wero Whitewater Park course apart with a sizzling 85.76sec time. 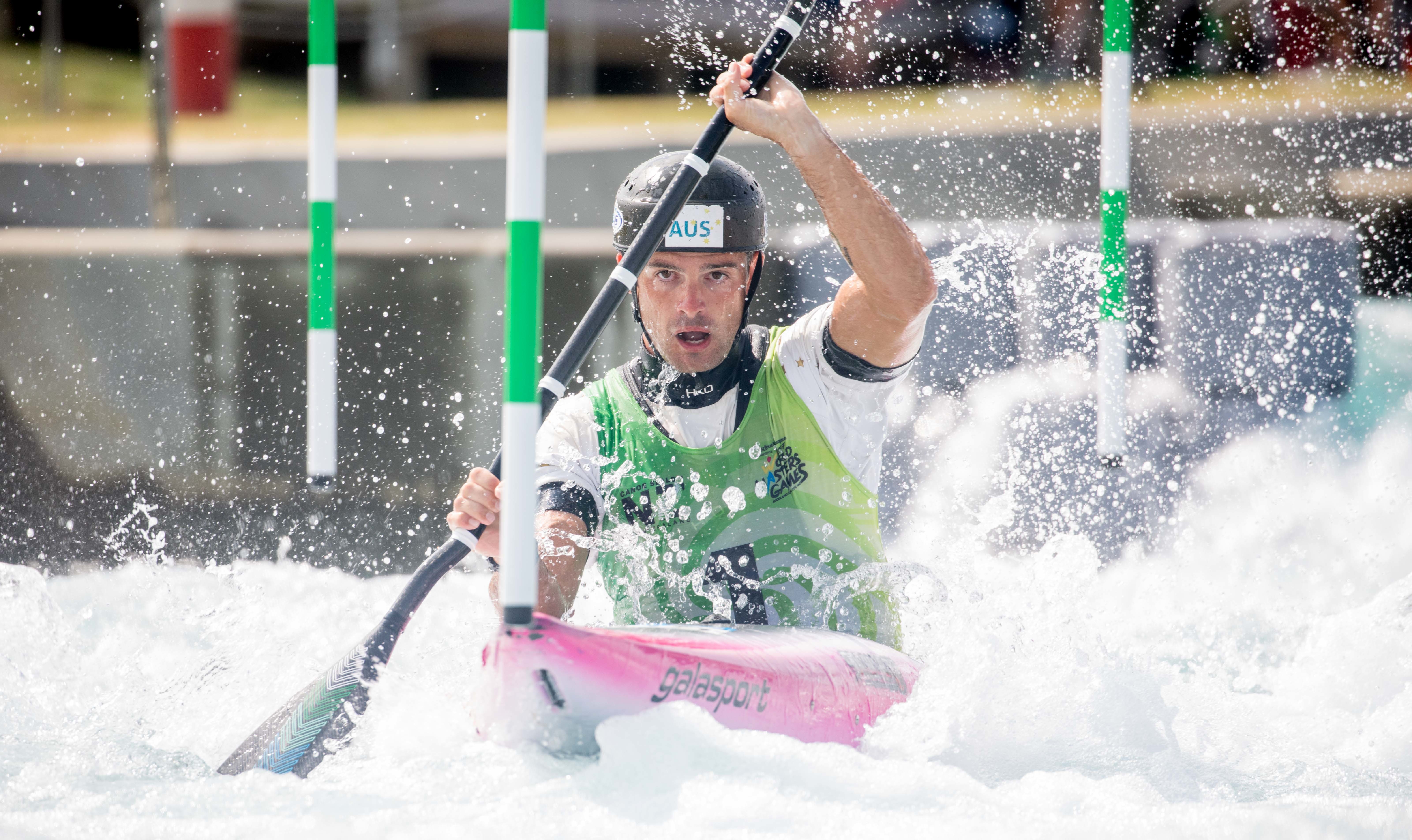 “It was the first race and it absolutely counts. I felt a bit unstable on the top half of the course and for a while I thought I was not going to make it. But in the bottom half I had a much better feeling and had some energy in the tank so I was able to go a bit harder than in the semi-final,” Delfour said, who qualified for the final with a second place in the morning’s semi-final.

“I was definitely nervous at the start of the race because I felt like I was not quite comfortable enough but I surprised myself in the final. Olympic selection is never easy and I think we will always feel quite stressed and anxious but I try to relax and focus on what I do, what I have to do which is obviously easier said than done,” Delfour added about the pressure of selection.

“The level at the Oceania champs has been going up and up and New Zealand has improved so much,” Delfour said. “This was the first time at a race here that we’ve had such a tough field and such a hard race.” 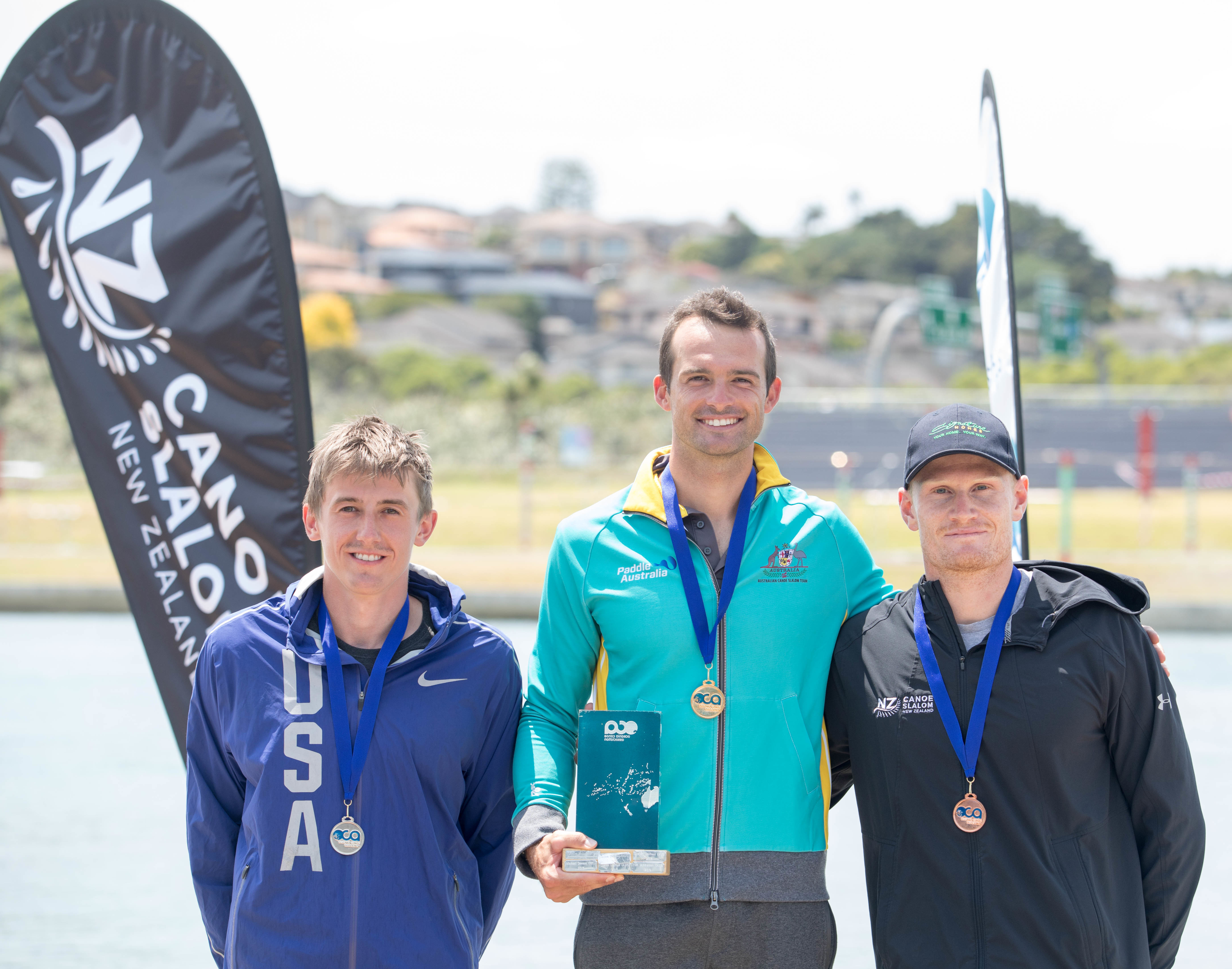 Daniel Watkins, who was doubling up in the men’s K1, was the top ranked Australian paddler heading into the final following a win in the semi earlier in the day, but was not able to repeat his winning performance in the C1 on Sunday with a 50 seconds penalty for missing a gate throwing him out of contention for the top spot and seeing him finish in tenth.

After provisionally securing the C1 men quota spot on Sunday, Australia’s canoe slalom paddlers have now secured the maximum quota spots per country for the Tokyo 2020 men’s K1 and C1 as well as the women’s C1 and K1 events.

The team is now heading back to Penrith for training and to prepare for the second and final round of Olympic selection as well as World Cup, U23 and Junior selection at the Australian Open in Penrith 21-23 February 2020.

Livestreaming
The 2020 Oceania canoe slalom championships was  livestreamed on Sky Sport Next, in partnership with the New Zealand Sport Collective.

Catch up on Sunday livestream:
https://youtu.be/7RkjhtBZhCc

Catch up on Monday’s livestream:
https://youtu.be/jYZNcYPa0lc