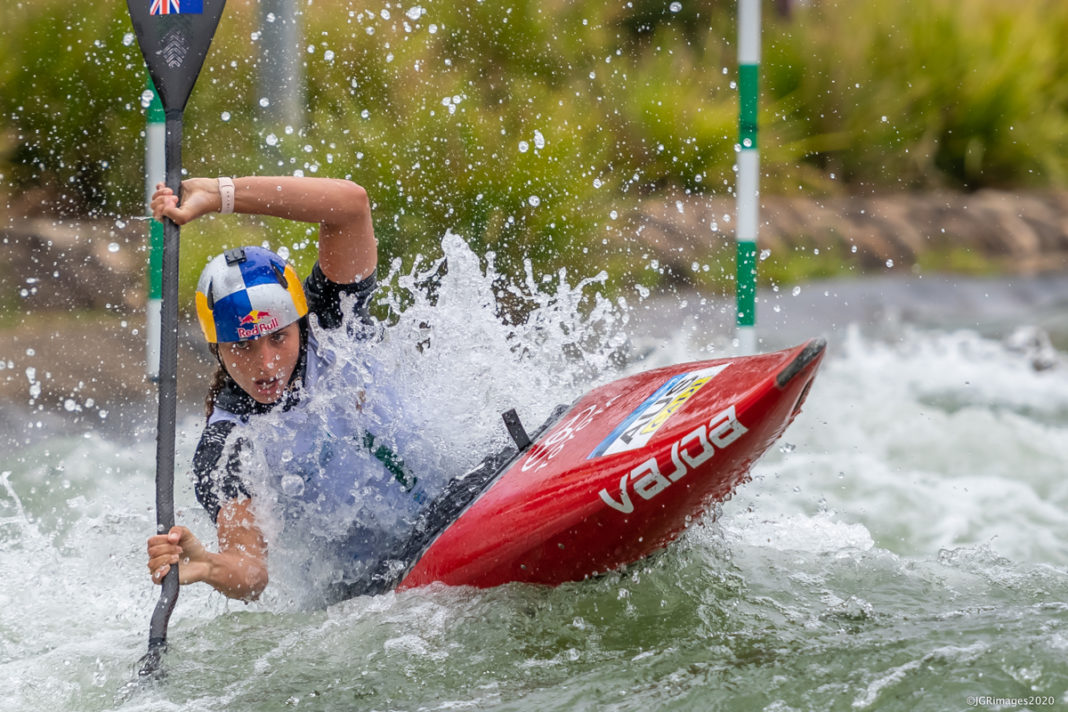 Paddle Australia’s most successful canoe slalom paddler of all time and dual Olympic medallist, Jessica Fox, has kicked-off the 2020 Olympic season in style, blitzing the field at the 2020 Australian Canoe Slalom Championships and winning both the women’s K1 and C1. Tasmanian Daniel Watkins also impressed winning his third national title in a row in the men’s C1, while Rio Olympian Lucien Delfour took home the title in the men’s K1.

The 2020 Paddle Australia Canoe Slalom Championships at Penrith Whitewater Stadium was the season opener and first hit out of the Tokyo 2020 season for Australia’s best canoe slalom paddlers on home waters and the lead-up event to the canoe slalom national selection season. The national titles will be followed by the 2020 Oceania Canoe Slalom Championship in Auckland (1-3 February 2020) and the Australian Open as part of the 2020 Sydney Whitewater Festival (21-23 February 2020), with both events relevant for senior and U23 selections. 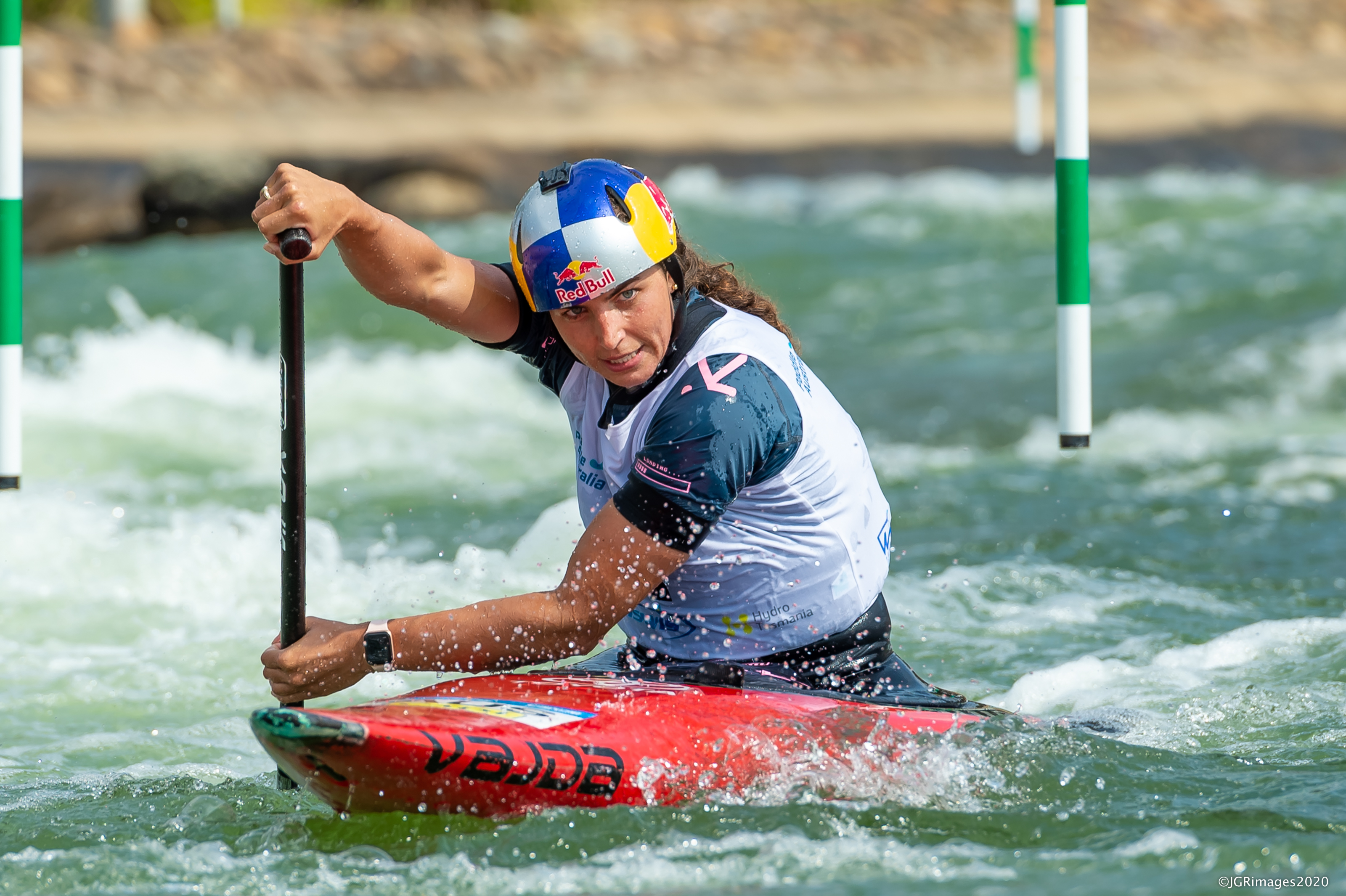 194 days out from the Tokyo 2020 Olympic Games, Fox impressed with clean runs and fast times over the weekend and took home the double national title after missing last year’s nationals. Fox finished the K1 in a time of 97.88 seconds and over ten seconds ahead of second placed Kate Eckhardt (TAS).

“It was great to have our first hit out of 2020 and be back racing nationals after missing last year’s. I’m happy with my racing, especially in K1 which saw me put down some fast and clean times. It was a bit less consistent in C1 but happy to win the double,” Jessica Fox said.

Second and third placed Kate Eckhardt and Genie Collin (WA) – first and second placed U23s – will both be vying for another U23 selection this year with Kate Eckhardt adding a fourth place in the women’s C1 to her nationals’ results. 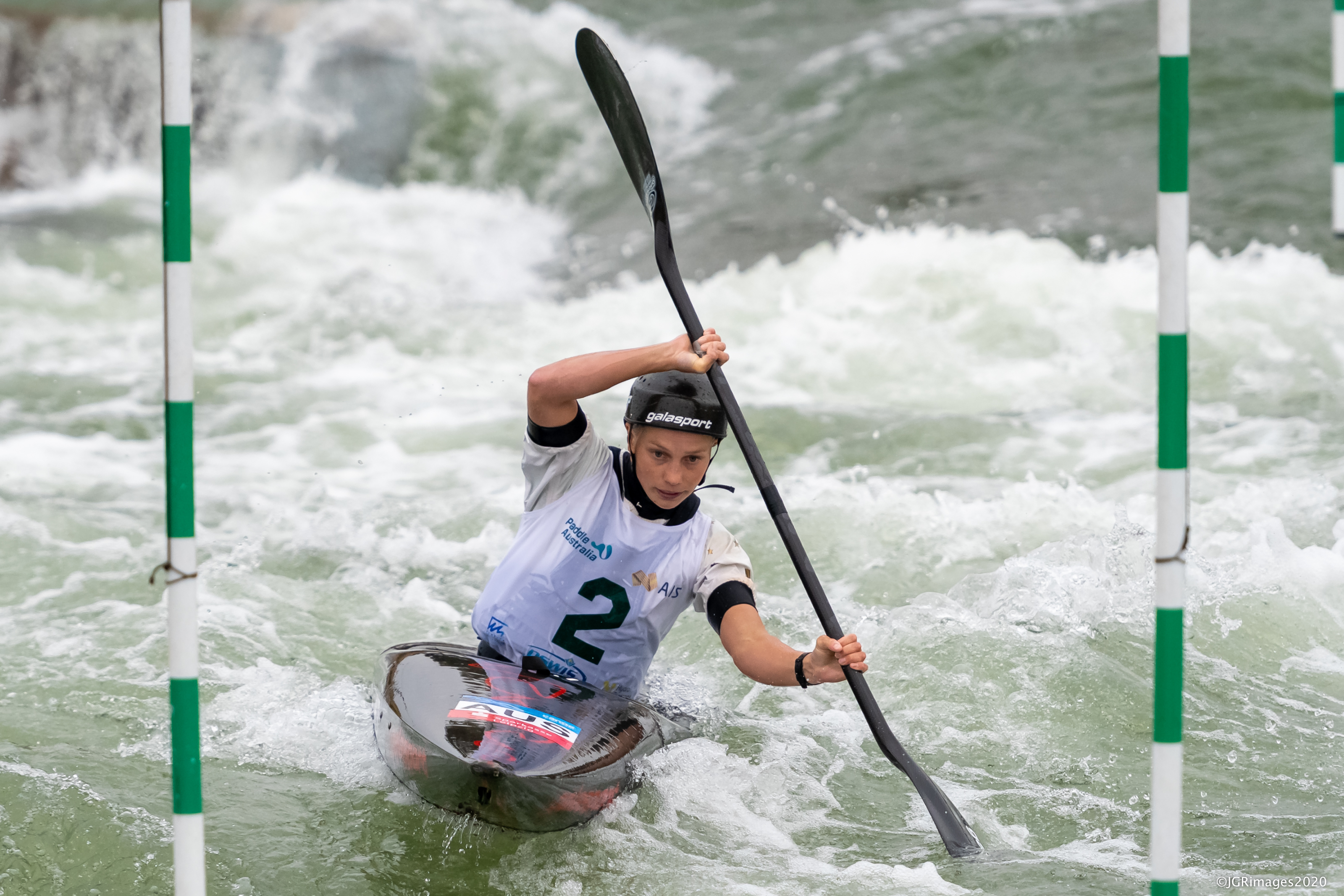 “It was good to have a ‘warm up’ race before selection to get a good feel for where I am at. Overall I was not totally happy with my racing, I had some good runs but always with touches. Some big mistakes today in C1 cost me a lot of time which was a frustrating end to the competition because I know that I was capable of a faster run. This gives me a few things to work on over the next few weeks leading up to the selection races,” Kate Eckhard said about the tasks at hand.

Collin, who only contested the K1, took home her first ever senior nationals medal.

“This was my first senior medal at nationals so I’m pretty stoked and I was really happy with my final run on Saturday. I had a really solid run with just a few small mistakes here and there and I definitely felt like I became more and more comfortable on the water throughout the weekend.”

Collin, who contested both the U23 canoe slalom world championships as well as the wildwater championships in 2019, will only be focussing on slalom this year. 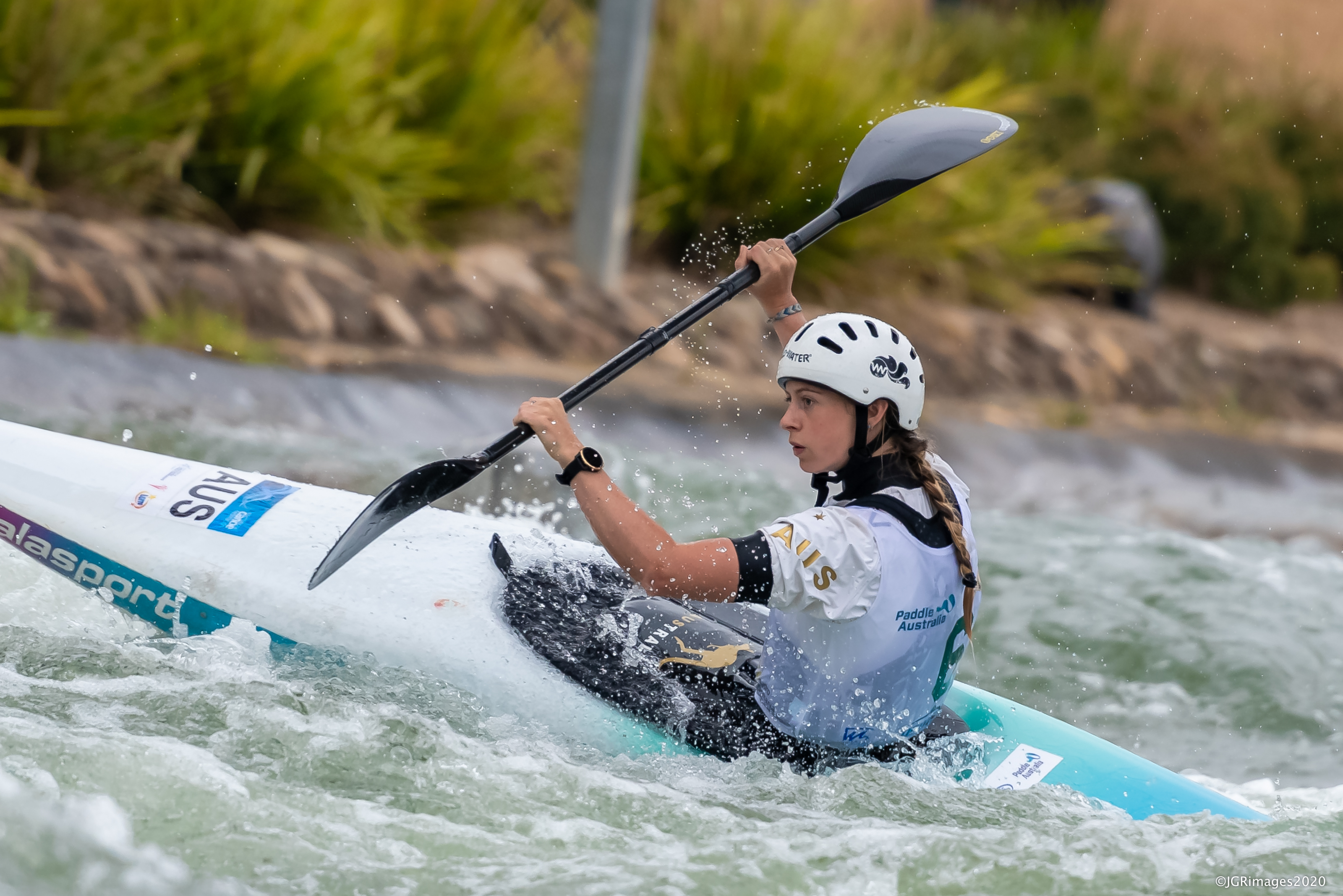 “I have been working hard to lift my racing level since Worlds last year and it’s really cool to see it starting to show. I’m super excited for selections this year and will be racing the Oceania and the Australian Open as part of my selections over the next few weeks. I decided not to race in wildwater this year and I’m just focusing on slalom. So, I’m really excited to have more time to really train in my slalom and to finish my university,” Collin said.

The senior nationals were only selection relevant for the Junior paddlers and up and coming slalom talent Sophie Wilson (NSW) made the most of it, finishing as the top ranked Junior in the women’s K1 after a fifth place in her first senior final. In the women’s C1, Wilson finished 11th.

Already last weekend, Wilson won all her individual and team events at the 2020 Paddle Australia Canoe Slalom Age Championships in Tasmania and looks set to make her second Junior team this year. With Junior selection to be finalised at the Sydney International Whitewater Festival at the end of February, this would be great comeback for the 16-year old Penrith local, who had to undergo wrist surgery last year.

“It is a bit of a surprise to be doing so well after having a few months off following surgery and gradually getting back on the white water. Tasmania was my first competition after extended physio and I am very happy with my progress over the last few months,” Sophie Wilson said. 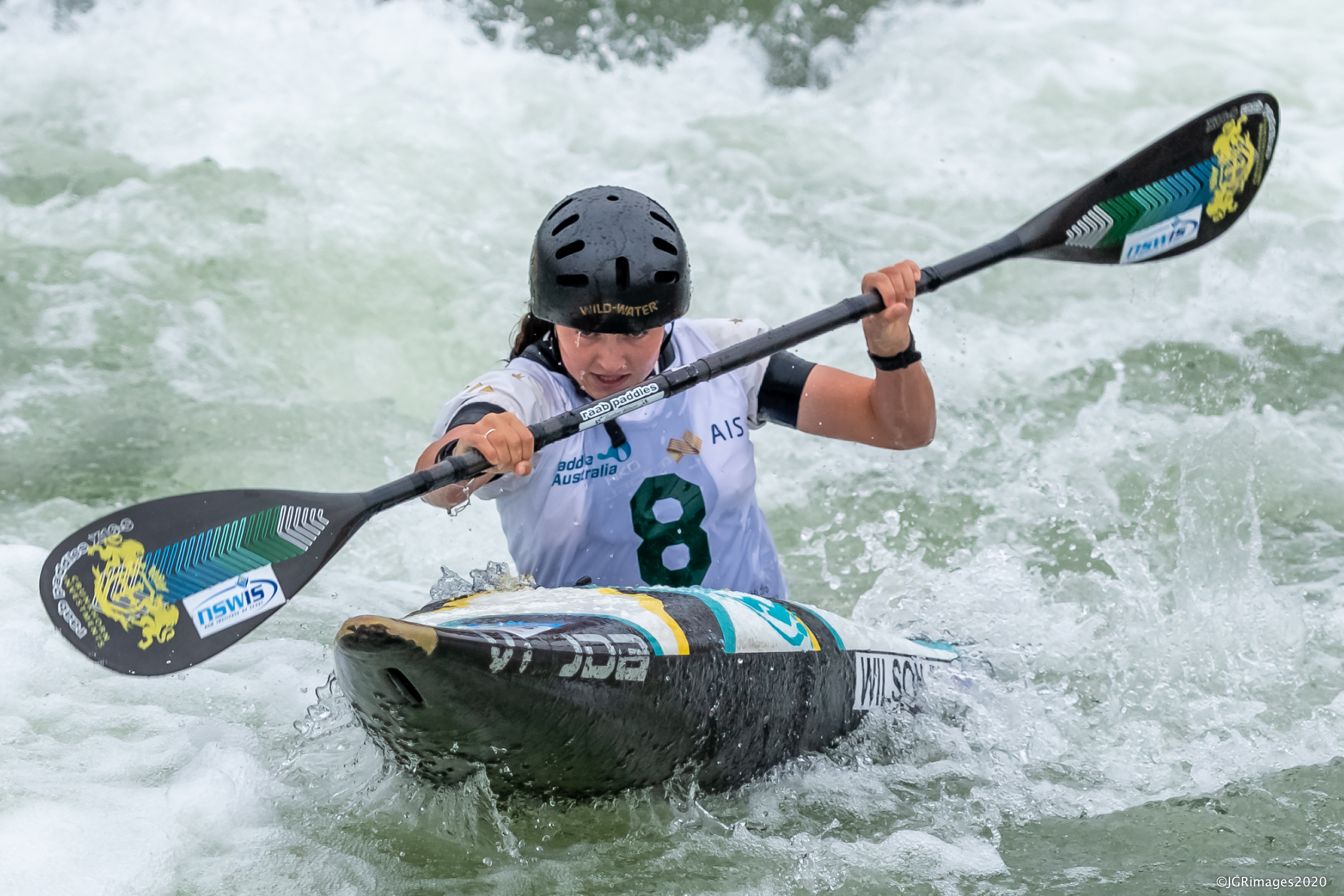 “It has always been my dream to be like Jessica Fox and the older paddlers who have always been so supportive and encouraging and my first time in the senior finals was awesome experience. My major goal for this season is to make junior team and perform to the best of my ability in Tacen (Junior World Championships).”

In Penrith, Wilson not only lined up together with her heroes in the final, but also had the opportunity to race the team event together with Jessica and Noemie Fox.

“It was great to see all the juniors out here racing hard for their selection. Sophie is one of our locals and it’s been great to see her progression, especially after a wrist injury last year. We finished off with a team run – her first one with Noemie and me which was great,” Fox said about racing together with the juniors.

“Paddling with Jessica and Noemie in the teams run was a dream come true. They are both so friendly and encouraging. Must admit I was very nervous to be paddling with such experienced paddlers,” Wilson added.

Fox is the only Paddle Australia athlete already selected on to the Tokyo 2020 Australian Olympic team, but national selection trials at the next two events are yet to decide who will join her in the canoe slalom team.

The Australian Paddling team already secured the maximum quota spots per country for the Tokyo 2020 men’s K1 and women’s C1 and K1 events at the 2019 World Championships, but will still be looking to earn a quota in the men’s C1 event. National selection trials will then confirm, who will be nominated to the Australian Olympic Committee for selection.

Rio Olympian Lucien Delfour secured Australia the men’s K1 quota spot at the ICF Canoe Slalom World Championships in September last year but who will represent Australia in Tokyo is yet to be decided. 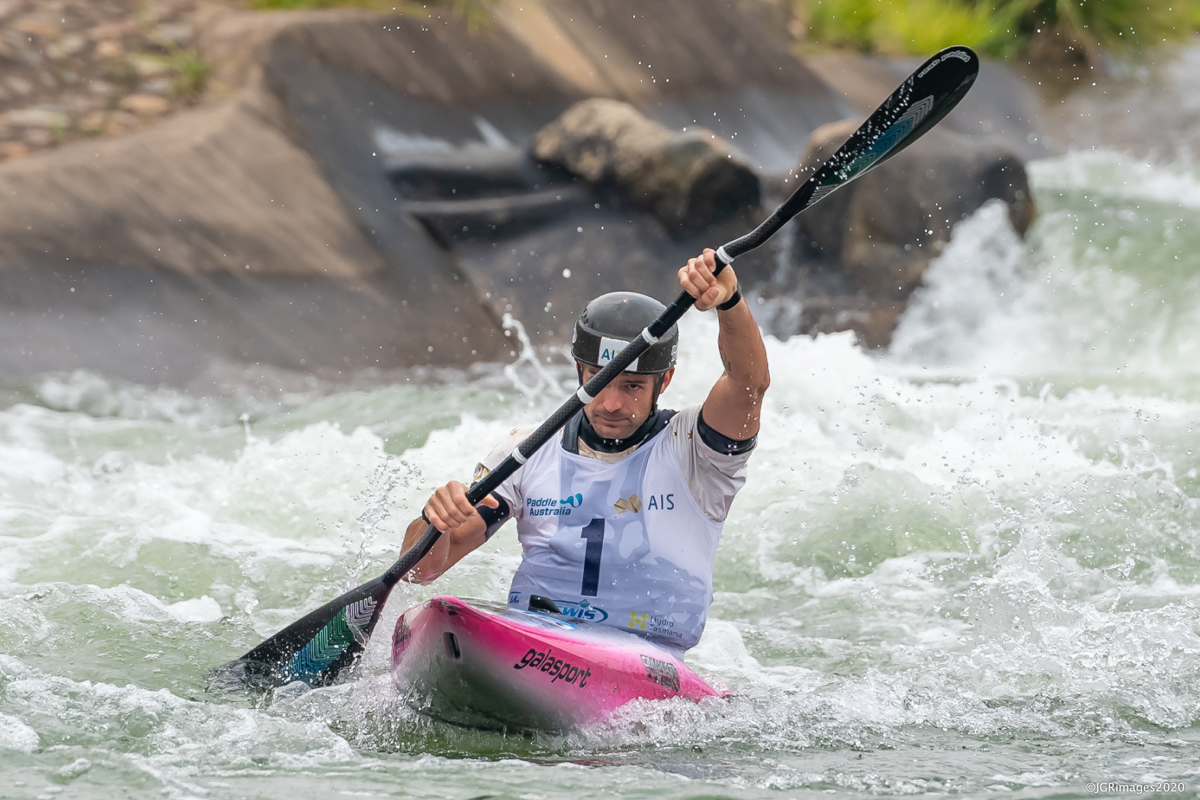 On Sunday, Delfour set a first mark for 2020 by winning the national title in a time of 89.67 despite a two seconds penalty ahead of New Zealand’s Callum Gilbert. Tim Anderson (NSW) finished third and 1.97 seconds behind the winner. Western Australian Ben Pope finished fourth and third Australian.

“It’s always nice to get the title, but i think of the race more like a rehearsal and a way to gauge where I am at the moment and what I need to work on until selections,” Lucien Delfour said.

In the men’s C1, the competition is even tighter with Australia yet to secure the Tokyo C1 quota spot and the upcoming Oceania Canoe Slalom Championships and Contentinental Qualifier the final chance to do so.

Nationals were the first indication of the tight battle to come with 2019 national team paddler Daniel Watkins throwing down the gauntlet and winning the men’s C1 national title for the third time in a row.

“The men’s C1 is super competitive at the moment so I am really happy to have been fast enough to get the win. This is three national titles in a row and that is something I was really pushing for so I’m very happy with the result,” Watkins set.

“Olympic selection was on my mind a little bit but not a whole lot. This was the first race of the season and the last race before selection so I was mostly focussed on getting my head back into race mode and chasing the national title,” Watkins added about the upcoming selection trials and Olympic quota competition.

“This weekend’s given me confidence in my form for this summer going into Olympic selection and I hope I can carry this form and win the first selection race in NZ to take the pressure off the rest of the selection,” Watkins added. 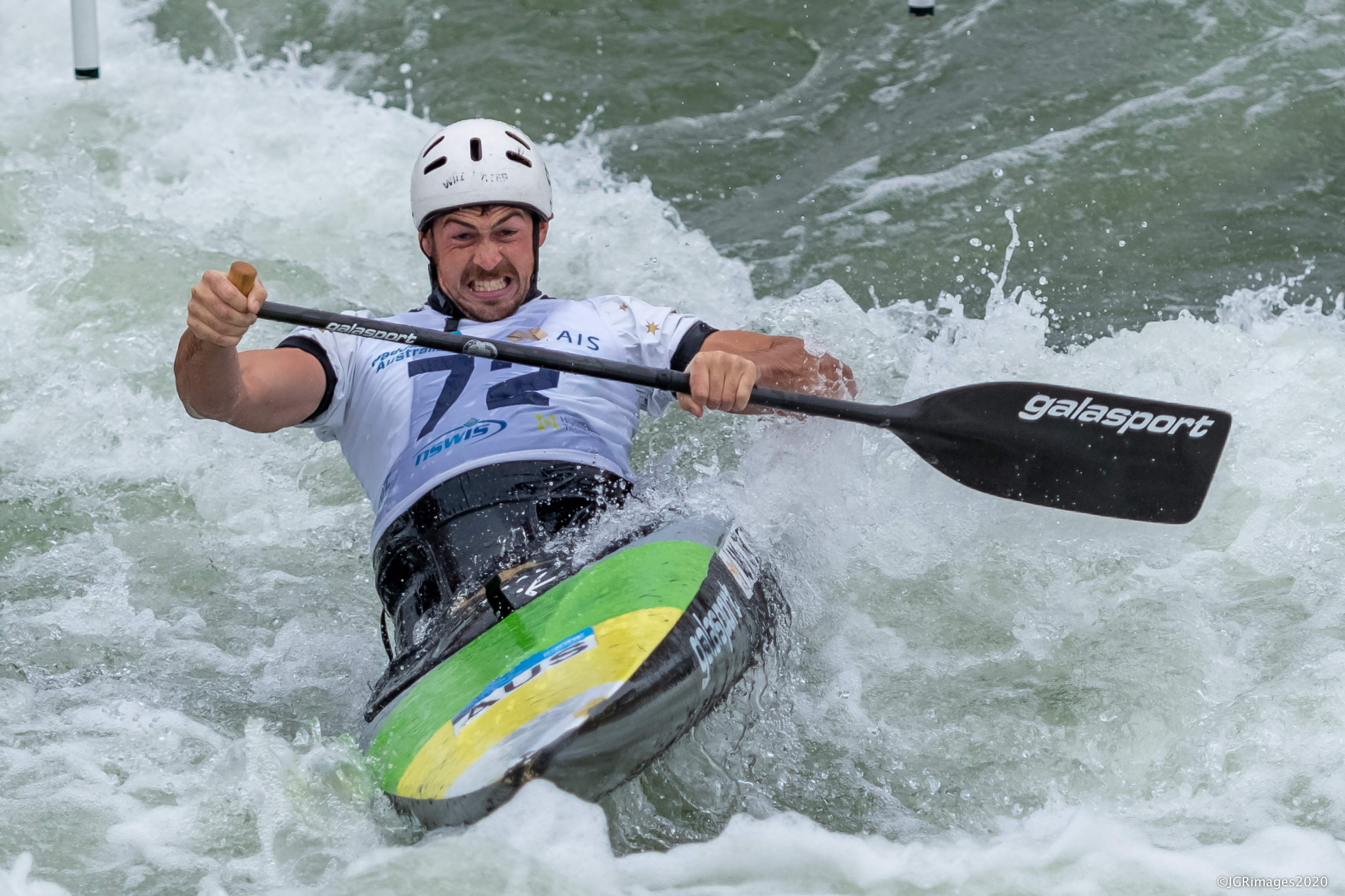 Watkins will be chased by second-placed Ethan Hodson as well as U23 paddler Steven Lowther (WA) who finished third. Also vying for selections are amongst others 2019 national team paddlers Tristan Carter (VIC), who won the semi-final and finished fifth behind Brodi Crawford (WA) as well as Rio Olympian Ian Borrows (NSW), who finished seventh, behind London Olympian Kynan Maley (WA) in sixth.

Also part of the 2020 Canoe Slalom Championships were the inaugural Extreme Slalom events which took place on Thursday and with Ben Pope winning the men’s event, while Dita Pahl took home the win in the women’s.

With the bushfire activity in the surrounding areas and extreme heat experienced on Friday, the event committee implemented measures to constantly monitor environmental conditions throughout the event to ensure the health and safety of athletes and officials.

Some of Friday’s heats were re-scheduled to the morning to avoid the extreme heat that was forecast for Friday afternoon. A southerly change moved through on Friday evening resulting in decreased temperatures but increasing smoke activity from the surrounding bushfires, resulting in Saturday morning’s racing of the men’s C1 and women’s K1 semi-finals and finals being postponed to the late afternoon. After the air quality improved during the day, the full set of semi-finals and finals were completed.

On Sunday, all individual events of the women’s C1 and men’s K1 semi-finals and finals were completed as planned. The team events had to be cancelled though following a spike in air quality levels.

“The health and safety of our athletes as well as officials and volunteers at any of our Paddle Australia events is of utmost importance to us and given the recent air quality challenges due to the ongoing bushfires in the Penrith and Sydney region, the organising committee, including Paddle Australia representatives, organisers, chief judge and athlete reps, were monitoring the air quality ratings throughout the event. Fortunately, we managed to get through the large part of the event, but when the air quality deteriorated at midday on Sunday, the decision was immediately made to cancel the team events,” Paddle Australia National Performance Director Shaun Stephens explained.

With more events coming up in Penrith, Paddle Australia will continue to monitor the situation carefully. The health and wellbeing of all Paddle Australia members (athletes, staff, officials and volunteers) is paramount and Paddle Australia will be using the AIS recommendations as a guide in determining whether upcoming competitions should proceed, be modified, or, in extreme circumstances, be cancelled due to potential health risks to those involved.

As at the canoe slalom championships, these decisions will be made in conjunction with local competition organisers, recognising that paddling competitions are diverse in nature and that local conditions and circumstances will vary. See Paddle Australia statement in regards to Air Quality here: http://paddle.org.au/2020/01/06/statement-australian-bushfires-and-air-quality/

The canoe slalom season continues at the 2020 Oceania Canoe Slalom Championships in Auckland (1-3 February), before the 2020 canoe slalom teams, including the U23 and Junior teams, will be finalised at the Australian Open, which is part of the 2020 Sydney International Whitewater Festival (SIWWF) at the end of February (21-23 February 2020). Teams are expected to be announced at the end of February.