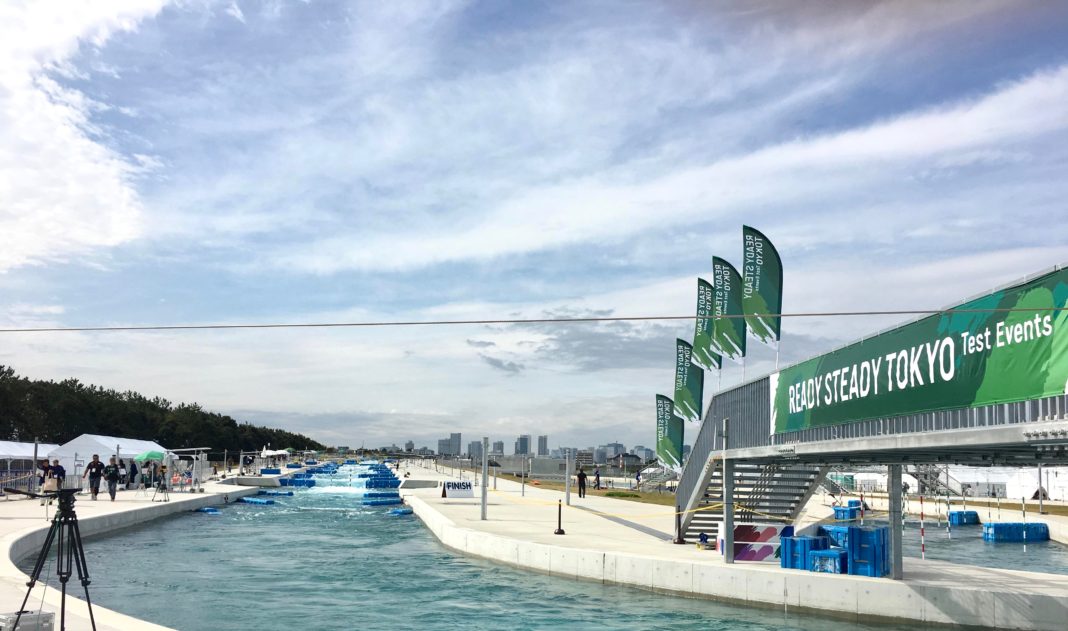 The world’s best canoe slalom paddlers have given the Tokyo 2020 Olympic canoe slalom course the thumbs up following the “Ready Steady Tokyo” test event over the weekend.

Australia’s canoe slalom paddlers Jessica Fox, sister Noemie Fox, Lucien Delfour as well as Daniel Watkins are amongst the group of slalom paddlers from around the world who are currently using the first-time opportunity to test the waters at the Kasai Canoe Slalom Centre.

The team is training on the course that will be hosting next year’s Olympic canoe slalom competition for two weeks. Lucien Delfour and Noemie Fox also competed at the test event over the weekend (25-27 October 2019). 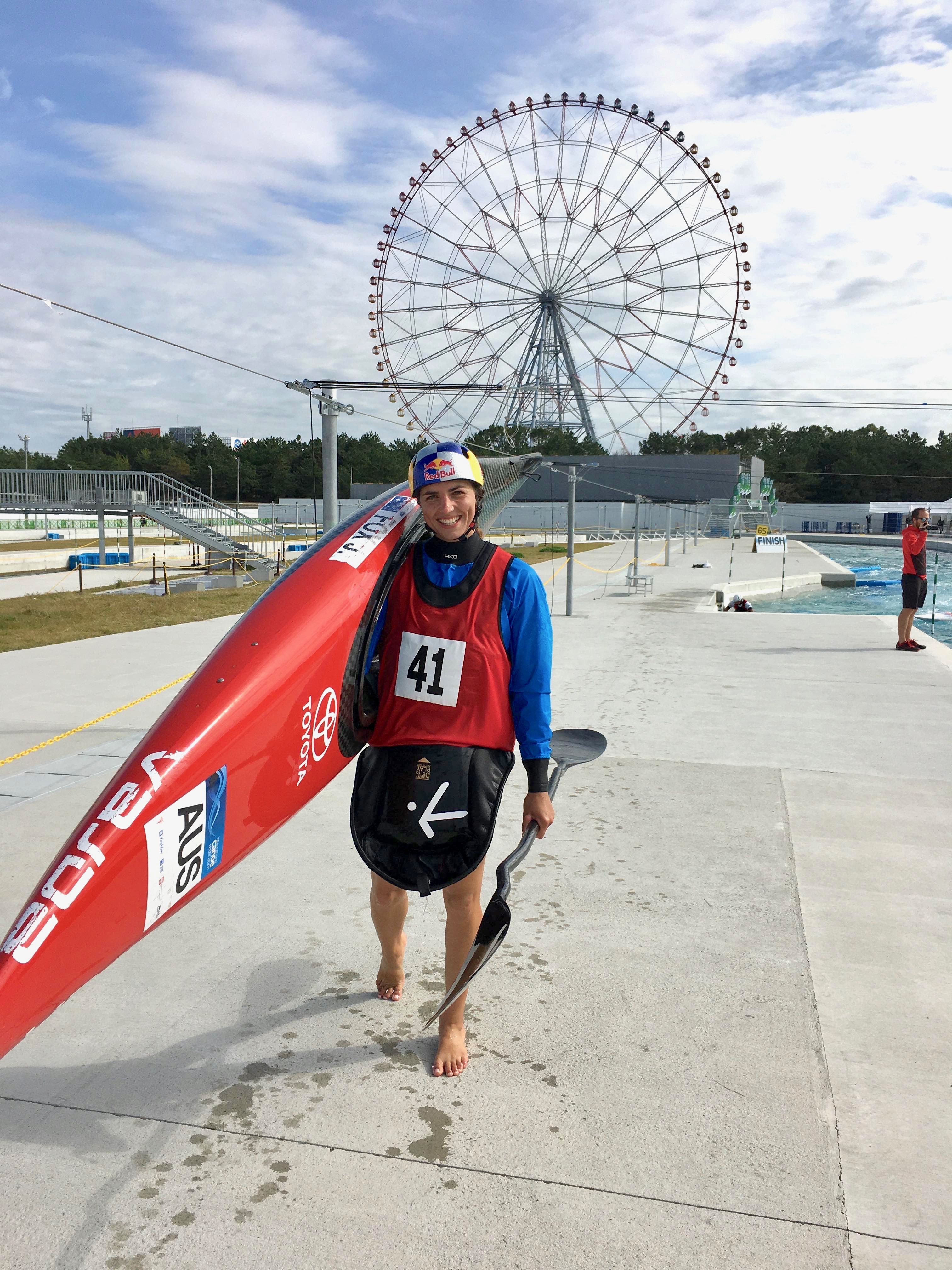 “I didn’t race but enjoyed watching and learning from the bank. It looks very challenging and I’m looking forward to learning the ins and outs of this new course. They are tweaking features every day so it will be interesting what they decide on for the final course configuration,” world #1 and Olympic medal hopeful Jessica Fox said, who is focussing on training on the course.

“Visually the course looks pretty cool – you have Tokyo skyline in the background and Mt Fuji on a clear day, with a big Ferris wheel in front as you paddle down. It looks very similar to Rio. Some of the waves and stoppers are quite variable and it’s tricky! Although there are no big drops, there are a lot of technical components to it,” Fox described her impressions after her first sessions on the course.

While Jess Fox has been focussing on her training, Lucien Delfour and Noemie Fox also joined the racing action over the weekend with both making the test event final.

Rio Olympian Lucien Delfour finished fifth in the men’s K1 after qualifying with a seventh place in the semi-final, while Noemie Fox finished third in her semi to go through to the final in the women’s C1 where she finished sixth.

“It was good to have a few runs down the course. I learnt that I had to be rather aggressive and try and make up time on the upstream gates and the exits, which is hard on this course because the water is really hard to read. I found it a challenge to just let the boat go down the course and I feel you have to control it all the time and it definitely takes time to get used to,” Delfour described the challenges racing on the new course.

But getting to know the course challenges is what this trip is all about.

“We’ve had a good time training in Tokyo. We’ve put in a lot of training in this short time with two sessions a day and overall got used to the course quite quickly,” Delfour said.

It is Delfour’s first time to Japan and he has been loving the experience. 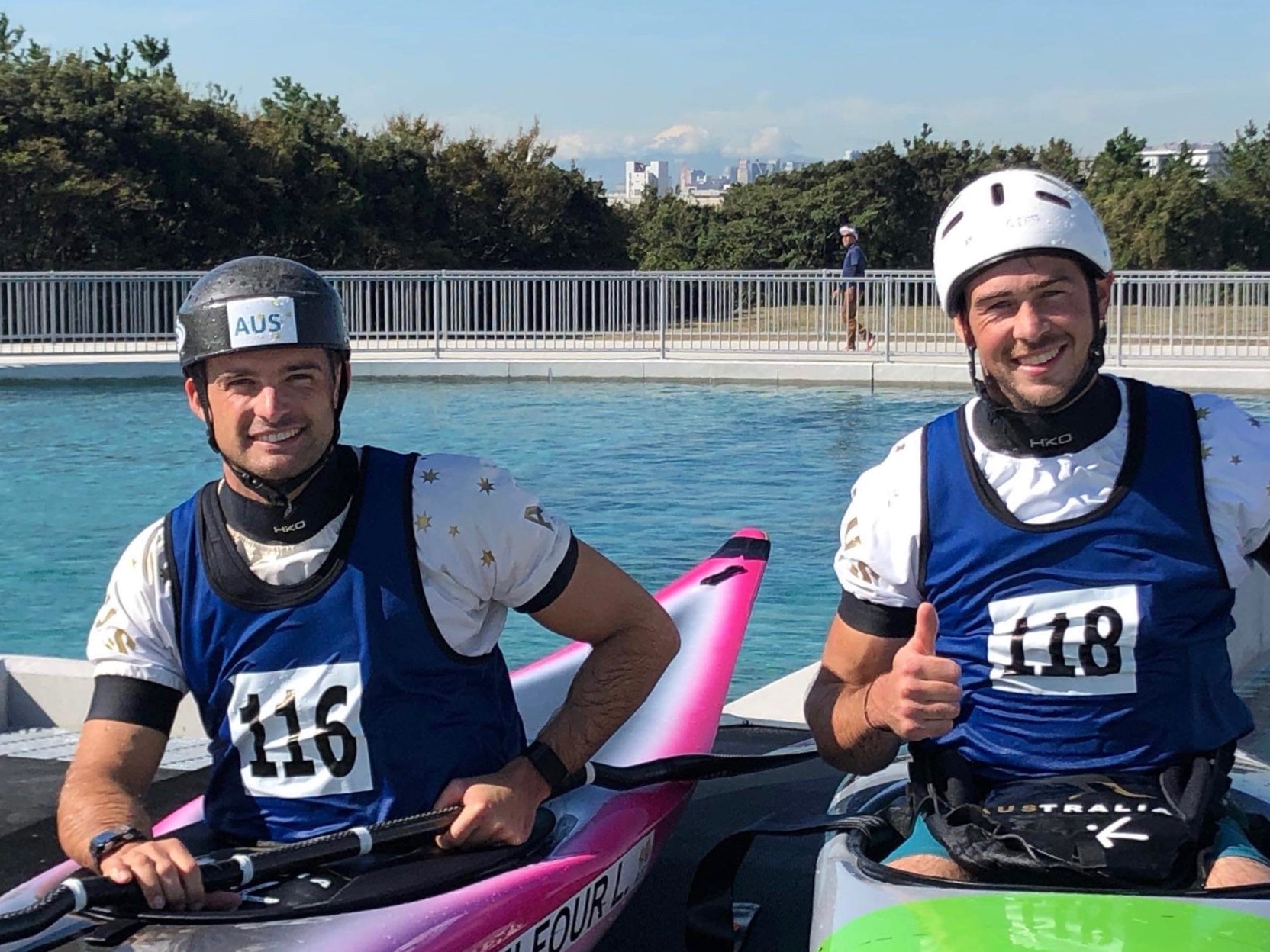 Lucien Delfour & Daniel Watkins with Mt Fuji in the back

“It’s my first trip to Japan and I wasn’t too sure what to expect, but I love the vibe, the order and cleanliness off the city. It’s a beautiful city and there are so many things to see. There are also lots of little things I like, the Ferris wheel at the course, the view of Mt Fuji on the conveyor belt and there are lots of little things like that,” Delfour added about his first impressions of Tokyo and the venue.

It is also the first time in Japan for Noemie Fox, who is very excited about the opportunity to test a brand-new Olympic course. 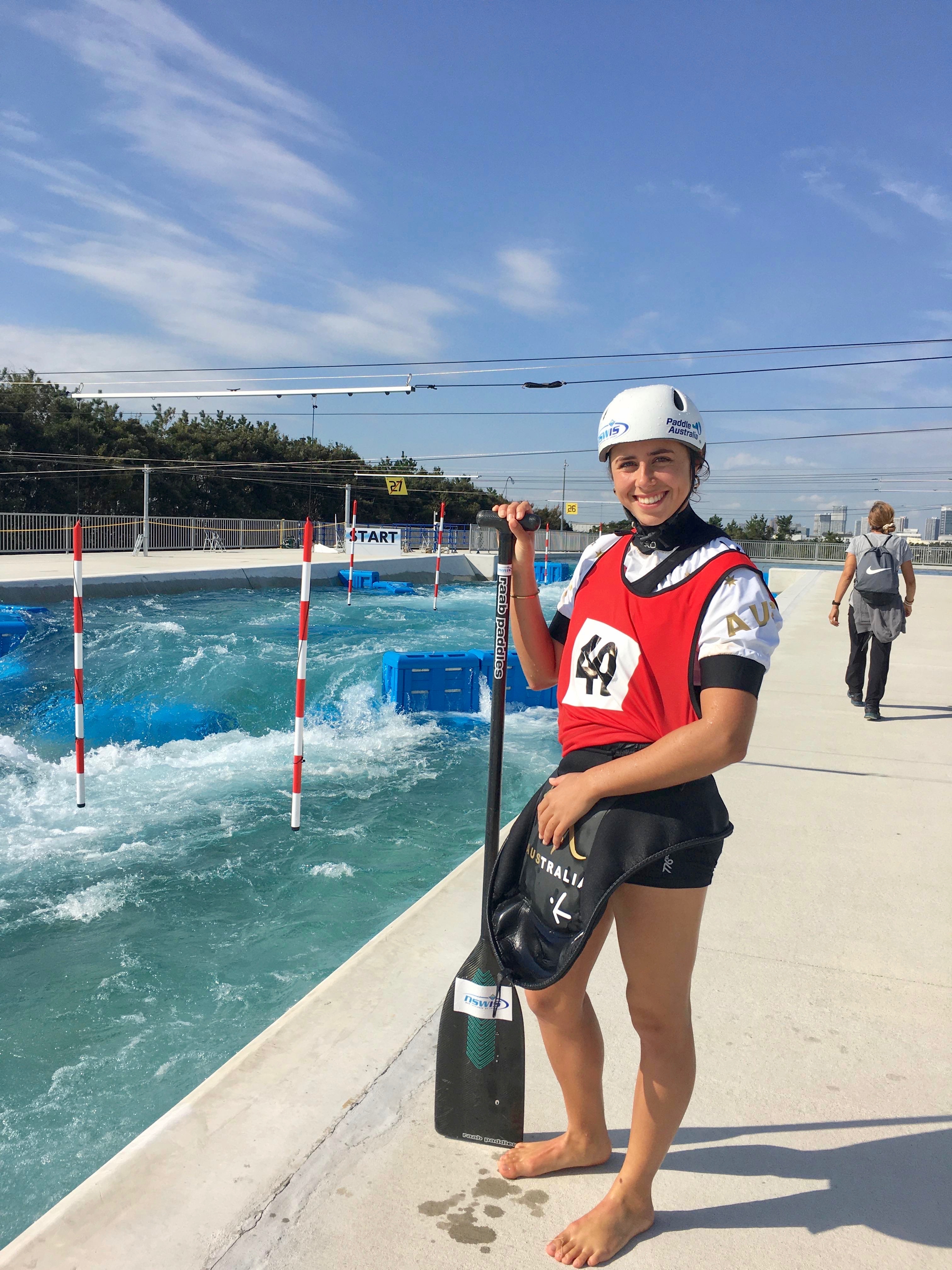 “I’m so excited to be here and it’s a great opportunity. Experiencing a new Olympic course is not an opportunity I’ve had before. I train on Sydney Olympic course, which obviously is a bit older and this one everyone is discovering at the same time,” Noemie Fox said.

“It’s quite challenging, it’s an artificial course that is quite similar to Rio and London in regards to the configuration of the blocks. It’s very pushy and it’s been cool to discover it all,” Noemie Fox added about the course.

“The course is quite central, we have Disneyland in the background and we can also see Mt Fuji which is supposedly the best feature of the course. It’s all been a bit overwhelming, but so cool and doing two sessions a day and then packing in some of the touristing in the afternoon has been hard but it’s been a great experience and I’m happy to have this opportunity.”

The Australian team will continue training on the course this week, while making the most of their time in Tokyo and exploring the city as well.

“Tokyo is an incredible city and there’s so much to see, it’s a bit overwhelming! I’ve had some great opportunities to visit some shrines, temples and museums and just to wander the city is amazing. I guess we are taking the chance to see as much as we can now because when we return at the next camp before the games we will be focused on training,” Jess Fox said.

Australian’s canoe slalom paddlers will continue training on the course this week before heading back home on the weekend.

Fox recently wrapped up another stellar season winning both the K1 and C1 world cup and finishing the world cup final with two gold medals. She also took home two silver medals from the 2019 canoe slalom world championships at the end of September and secured Australia the Tokyo 2020 quota spot. As a consequence, Fox will be able to contest both the K1 and C1 at the Tokyo 2020 Olympic Games with the C1 added to the Olympic program for the first time.

Fox’s world cup and world championships result earned her early pre-nomination for Tokyo 2020 and pending selection by the Australian Olympic Committee over the next couple of months, she will be representing Australia in both the K1 and C1.

Australia also secured the men’s K1 quota spot at the 2019 ICF Canoe Slalom World Championships in La Seu, Spain, at the end of September after Lucien Delfour finished eighth in the men’s K1.

While Fox secured herself pre-nomination within the team, the fight for nomination and selection is still open on the men’s team and the men’s C1 quota spot is yet to be secured. The next and final opportunity for Australia to secure an Olympic C1 quota spot will be at the ICF Canoe Slalom Oceania Championships in Auckland at the start of February (1-3 February 2019) with final selections in both the men’s K1 and C1 events to be finalised following the Australia Open in Penrith at the end of February.

Catch up on the live streaming here & VOD: https://www.canoeicf.com/canoe-slalom-olympic-test-event/tokyo-2019