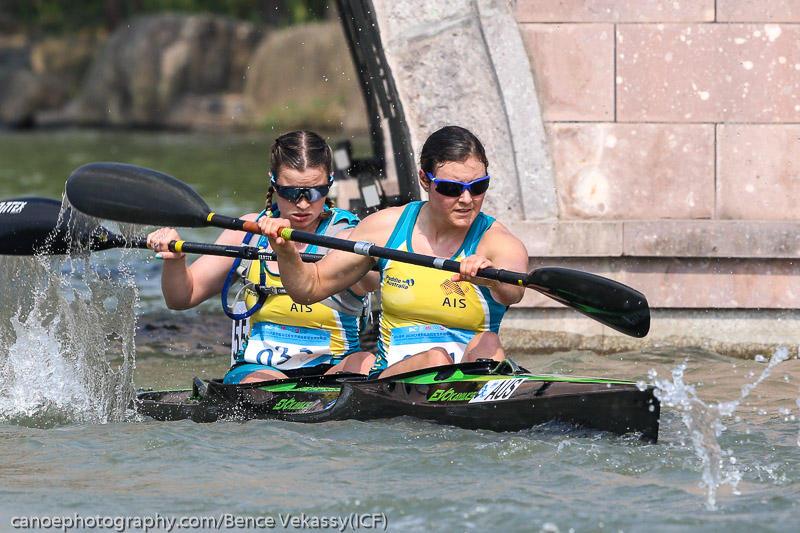 Australia wrapped up its 2019 ICF canoe marathon world championships experience with some encouraging performances in the men’s and women’s K2 on the final day in Shaoxing, China (17 – 20 October 2019).

Rebecca Mann and Hannah Scott were stoked to finish top ten in the women’s K2, fighting hard to finish in ninth position in a quality field.

Mann flew in to China late to join the team and to compete in the K2, and said

“It does make you a little bit anxious watching everyone else race, knowing you’re one of the last ones to go,” she said.

“We’re pretty stoked with that. It’s so different to racing in Australia, so to get to work with some other crews, we’ve never done that before.”

“It was the best race I’ve done this regatta I think,” she said.

“Being in there with Bec is so much better because you have that person to back you up the whole time. She was picking great lines, especially that first time going through the bridge, it was carnage and Bec just nailed it.” In the men’s K2, a possible case of mistaken identity cost Western Australians Josh Kippin and Jesse Phillips a 15-second penalty, which robbed them of a chance to pick up a top-ten finish. The Australians believe the judges mistook a South African boat for their boat.

“At the first portage we came in after a mixed start, and then we got lumped with a 15-second penalty straight off the mark which broke us off the tail end of our chase pack,” Phillips said.

“This race is probably 29.8 kilometres longer than I’m used to, what my body has been trained for for many years, but it’s a new challenge. I think we should have been up there in the top ten,” the London 2012 canoe sprint Olympian added. Hamish Young and Isaac Johnson were one of the most inexperienced crews in the race, and fought on well to finish 17th.

“The start was pretty huge and we were a bit slow off the line, so we just went as hard as we could from then on,” Johnson said.

“We had a few lucky chances, sticking with the Irish boats and South African boats that collided at the start, so we could go with them for a while,” Young said.

“If we just had two per cent more we could have stuck with them. Through the portages we were running side-by-side and putting in together, but we just didn’t have the juice.” See the event website for VOD and more info: https://www.canoeicf.com/canoe-marathon-world-championships/shaoxing-2019