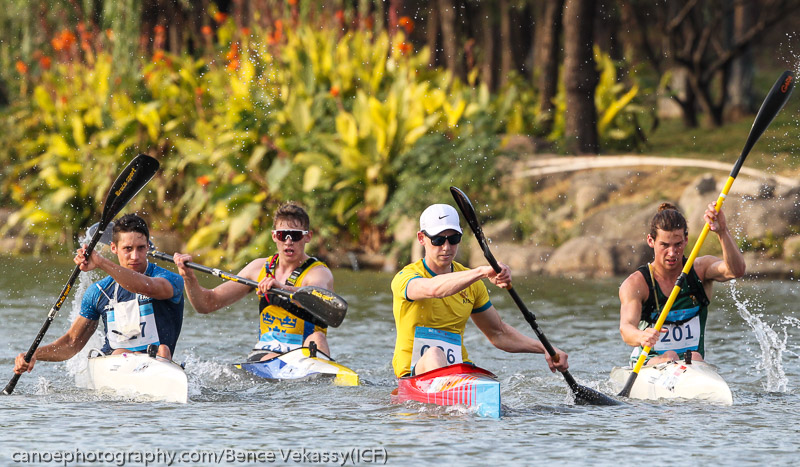 There were strong performances and plenty of learning experiences for the younger members of the Australian canoe marathon team at the ICF world championships in Shaoxing, China, on Friday.

Alana Johnson in 12th place and Hannah Scott in 13th pushed each other throughout most of the women’s U23 K1 race. Scott was bouncing back after competing in the women’s open K1 short race on Thursday.

“It was pretty nice, it was pretty civil going into the portages, making sure each of us had space, and through the bridges as well,” Scott said.

“Yesterday was amazing, it was such an amazing performance to be able to sit on the start line with all those open women, it’s something I’ve never ever done before. It was harder than I thought, and I pulled up pretty sore today.”

Johnson said the championships have been a fantastic learning experience.

“It’s my first Australian team, so I’m learning what it’s like to be on a team, all the camaraderie and how we can help each other through the races,” she said.

“I’m also learning what it takes to set up your boat for a race, and making sure everything is good to go.”

Brendan Clarke was 16th and Hamish Young 18th in a frenetic men’s U23 K1 final, where the pace was on from the very start. Young came into the event with a limited preparation after injuring his hand two months ago.

“I had a pretty decent start, but I just found once I fell back I wasn’t able to push myself as hard as I had done earlier in the year. I had a pretty hard lead-up with an injury to my thumb about eight weeks ago, so I had about five weeks out of the boat.

“I didn’t really have too much of a plan, I just wanted to go as hard as I could and get up the field as much as I could.” Joseph Burton and Chad Wiese finished 16th in the K2 juniors, a strong result considering it was just their second race together.

“It was pretty hard out of the start, it was a lot quicker than I was expecting and we got shoved out of the back a little bit, which didn’t help,” Wiese said.

“We were fighting our way back for the rest of the race, but it was a good comeback, so we were happy with that.”

Burton said he was a little disappointed not to have finished higher.

“It was hard work, it was pretty windy out there today,” he said.

“I didn’t have many expectations coming into the event, we just wanted to go out and see what we could do. The biggest thing I’ve learned is to make sure you give yourself enough room through those arches!” Emily O’Rourke and Madeleine Lamb backed up from yesterday’s junior K1 races with a 19th in the K2 final.

Racing continues on Saturday for the penultimate day of the world championships.