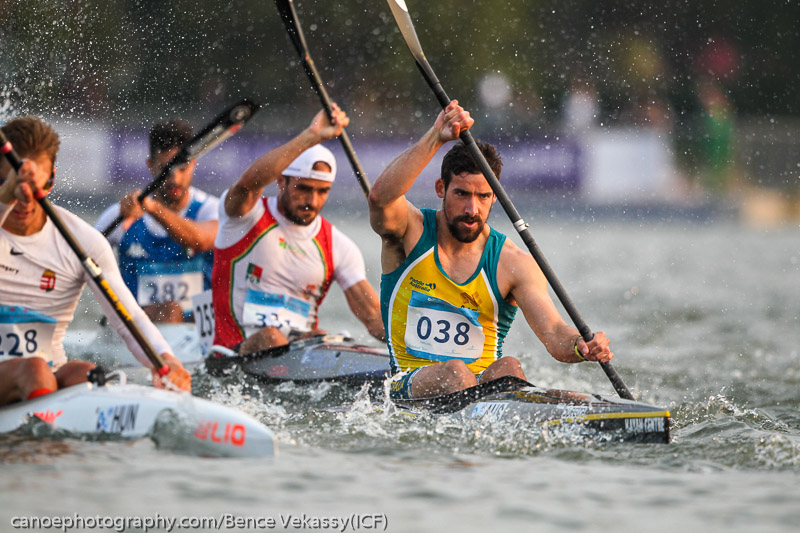 A sixth placing for Joshua Kippin and a seventh for Kate Leverett were the highlights for Australia on the opening day of the ICF canoe marathon world championships in Shaoxing, China.

Kippin was determined to put behind him a disappointing 2018 by making a bold statement in the inaugural K1 men’s short race, and raced hard from the start of the 3.60 kilometre race before finishing 25 seconds behind the gold medalist.

“I was hoping for top ten, but it’s always a bit hard knowing how the start will go, but I had a pretty good start so I tried to capitalise on that,” Kippin said.

“I was very much looking forward to the short format, we do a lot of sessions like this at home on a Thursday night. I’ve been doing a fair bit of sprint work this season, and to be able to combine that with my marathon skills, it’s an exciting format. Kippin said he is looking forward to more racing this weekend, including in the men’s K2 with 2012 Olympian Jesse Phillips.

“He’s going really well, we’ve trained together for the past six or seven months, and I’ve learned a hell of a lot from him,” Kippin said.

Leverett was stoked with her seventh in the women’s K1 short race, especially given the juggling act she is performing off the water.

“I don’t feel like I could really have asked for much more,” Leverett said.

“I’ve asked a lot of myself to come back this year, and I’ve worked hard in my training, but in reality we are travelling with two small children and I just tried to give it my best out there today, so I’m really happy with my result.

“I didn’t race perfectly, but I was proud to be racing for my country. Having ten world championships behind me now, I was lining up next to Hannah Scott who was competing in her first open race against me.

Scott finished 16th in the same race. Leverett said she never considered taking a break from the sport, even after having a second baby. “I really love this sport, marathon is just fantastic, it’s so exciting to have the short course added to the championships this year. We definitely have had our moments, we’ve had a lot going on, but we don’t give up. And that’s what marathon is all about.”

In other results on Thursday, Reka Abraham finished tenth in the women’s C1 short race, while Emily O’Rourke was 17th and Madeleine Lamb 23rd in the women’s K1 juniors.

“It was pretty tough, I broke my pumps just before the start so that was a bit rough,” Lamb said.

“But it was a great experience for me at my first worlds race. I didn’t sleep a lot last night, I was pretty nervous having not done anything like this before.”

It was also O’Rourke’s first singles race at a world championships.

“The start was a bit more hectic than I have experienced before, but once I found a pack and settled it was good,” O’Rourke said.

“I’ve done two world championships before, so I was a bit calmer. I wanted to finish midfield, do my portages well and paddle as hard as I could.”