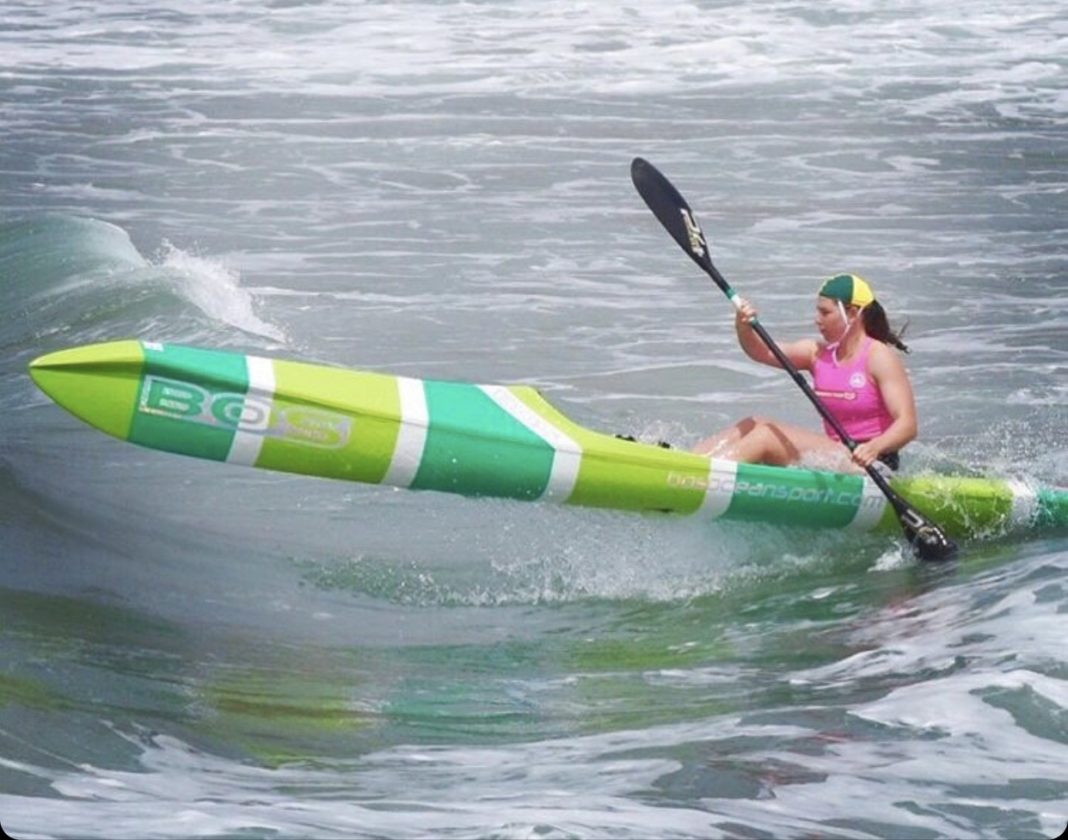 The International Surf Rescue Challenge was won by Australia in both the Open and the U19 Youth division after three tough tests at North Beach in Durban, South Africa.

The Australian Life Saving Team walked away with three trophies and a clean sweep of the International Surf Rescue Challenge, the Trans-Tasman Test and the Tri-Nations Test.

The Australian Surf Lifesaving Team undertook the 1st Test of the International Surf Rescue Challenge on Saturday and both the Australian Open and Youth teams came away as victors of that test. It was very tight racing with NZ nipping at the heels at every turn.

Olympians Riley Fitzsimmons and Alyssa Bull paired together in the open mixed ski relay and fought hard in the extreme conditions to come a very impressive second. Phoebe Wills-Grace – photo thanks to SLSA

Meanwhile, “Paddle Pal Mini” (as named affectionately by our senior “paddle pals” women’s canoe sprint team) Phoebe Wills-Grace was the ski paddler in the youth mixed ski relay with Kaan Karadag and extended the lead in her final leg to take the very convincing win by several minutes.

Phoebe, who was named as the Australian Youth Team Captain, followed up that form with another convincing win in the Youth Female Ski Race, as did Riley Fitzsimmons, who won the Male Ski Race. Youth Team – photo thanks to SLSA

In the Open Female Ski Race Aly Bull, after an amazing start and leading off the beach, had the misfortune of a huge wave set break on top of her, pushing her back several places. She very quickly regained momentum, and pushed to the front along with the NZ paddler and current long-distance surf ski champion Danielle McKenzie. They were neck and neck until the final throws, when Danielle secured the victorious wave.

In the second test, the Open Ski got cancelled due to extreme conditions but both the Australian Open and Australian Youth won the tests again.

The final test was another challenging competition, which saw Phoebe and Riley both winning their single ski races, and Aly fighting every step of the way in a tussle to the finish line. Needing to go to video finish, Aly was unfortunately defeated by a skerrick. Alyssa Bull – photo thanks to SLSA

Soon followed the mixed ski relay where Phoebe and her partner continued their winning streak in the Youth and made it three from three!

In the mixed relay, Riley and Aly picked up the silver in a very close run up the beach.

Riley Fitzsimmons was also part of a super specialist team of Georgia Miller, Harriet Brown, Hayden Cotter, Lizzie Welborn that put in a clinical performance to seal the Gold in the Ocean Lifesaver Relay (Taplin). Riley Fitzsimmons – photo thanks to SLSA

The Australian Youth Life Saving team, under the captainship of Phoebe Wills-Grace, had a clean sweep of their rivals in all three tests, with the team’s success due to a balanced skill set.

The Aussie youngsters only dropped points in two races in the third test and secured a 45-point lead over closest rivals New Zealand.

For a list of full results head to https://liveresults.co.nz/sls