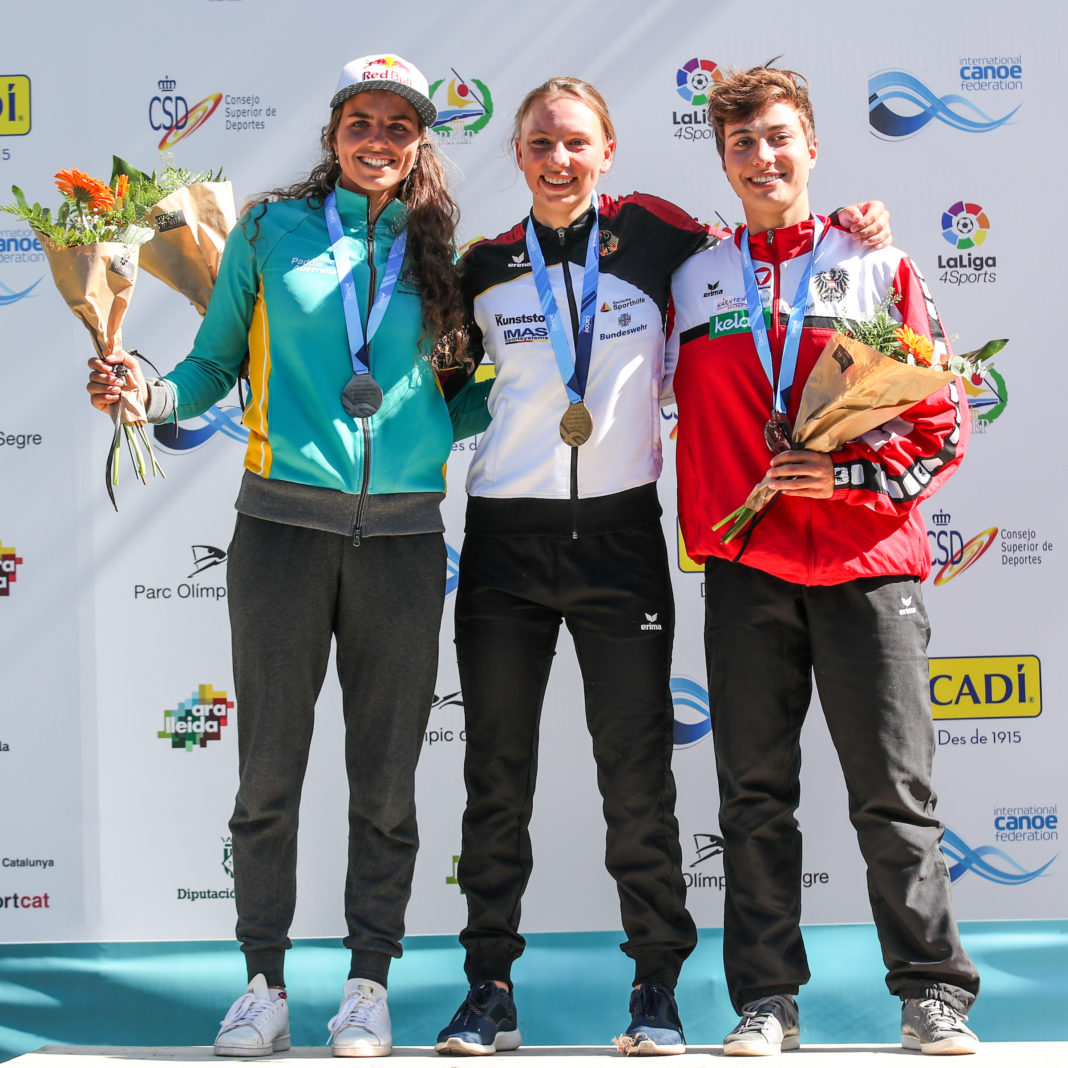 Australia’s paddling star and world’s most successful female canoe slalom paddler of all time Jessica Fox has wrapped up the 2019 canoe slalom world titles with one team gold and two individual silver medals after finishing second in the women’s C1 on Sunday. Fox also secured Australia another Tokyo 2020 quota spot in the process.

Already on Saturday, Fox won silver in the women’s K1, the boat class she also secured Australia a quota spot in earlier in the week. On Wednesday last week, Fox, sister Noemie and Rosalyn Lawrence combined their forces to win a team gold in the women’s C1 bringing Australia’s medal tally at the ICF Canoe Slalom World Championships at La Seu d’Urgell, Spain to three.

Fellow Rio Olympian Lucien Delfour also made it three quota spots for Australia when he qualified for the men’s K1 final on Sunday where he finished eighth. Australia will have another chance to secure the fourth Olympic spot in the men’s C1 event at the Oceania championships in February. 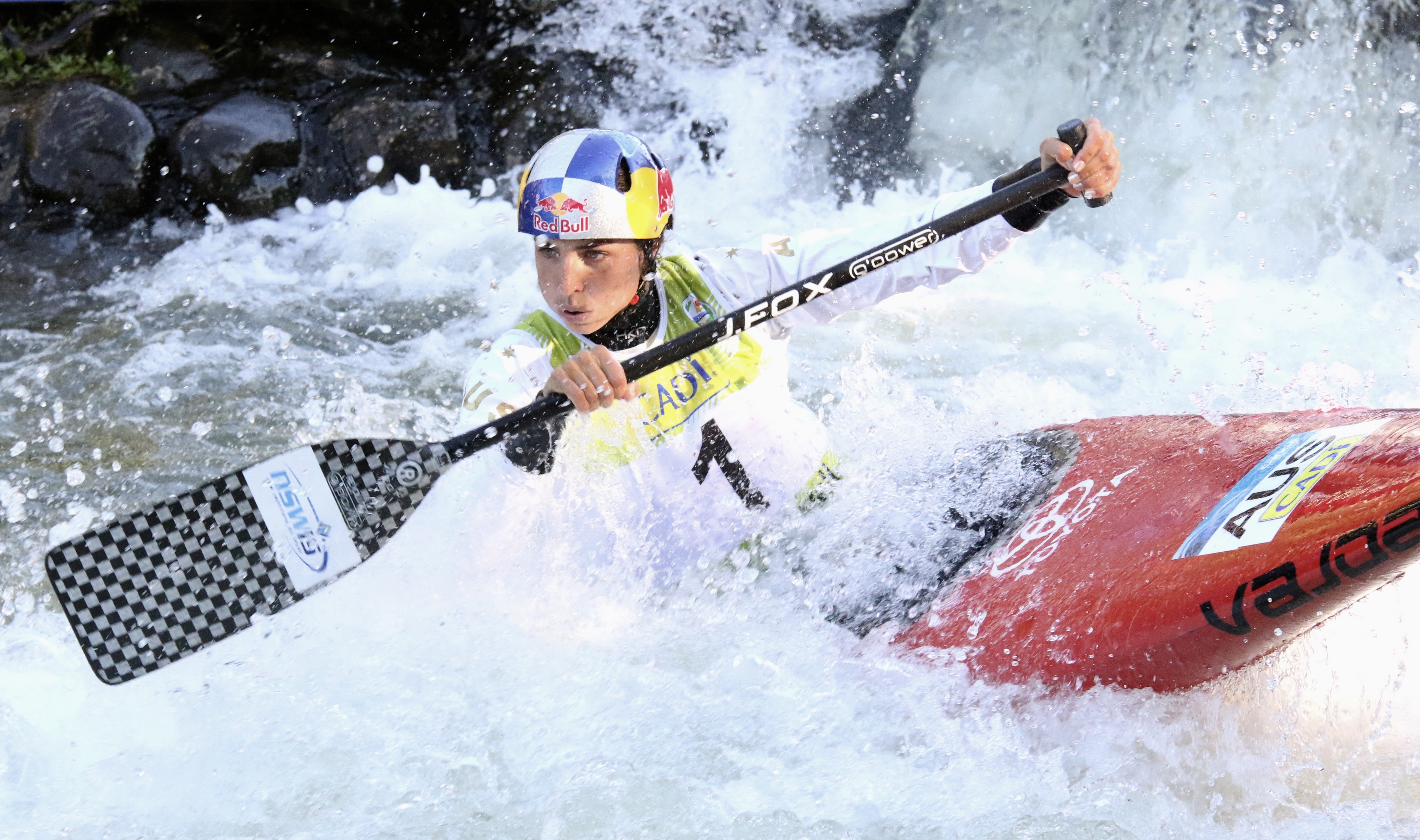 Subject to final nomination and selection, women’s K1 and C1 world number one Jessica Fox looks set to aim for double Olympic glory at the Tokyo 2020 Olympic Games next year following the conclusion of the world titles in Spain.

“It’s a huge relief. I’m feeling great joy and great pride to project myself now into the Olympic team and to say that I will represent Australia again is amazing. It’s just so tough in our sport. Only one can go to the Olympics per event and I’m really excited about the next few months and the lead up to Tokyo and then we’ll see,” Fox said.

“For me the goal was to qualify for Tokyo this year and to try and get the pre-nomination. And to do that it was also showing up to try and defend my world titles. Not today, but hopefully there will be other opportunities,” the four-time C1 and three-time K1 world champion said about the goals on the weekend.

Fox qualified for Sunday’s women’s C1 final with a second place in the morning’s semi-final and when she picked up a two-second penalty for a gate touch early on in the final, it was all about catching up.

In the end Fox did manage to finish the run with the fastest raw time, but adding the two seconds meant a 0.94 margin for Germany’s winner Andrea Herzog. Austria’s Nadine Weratschnig finished third. 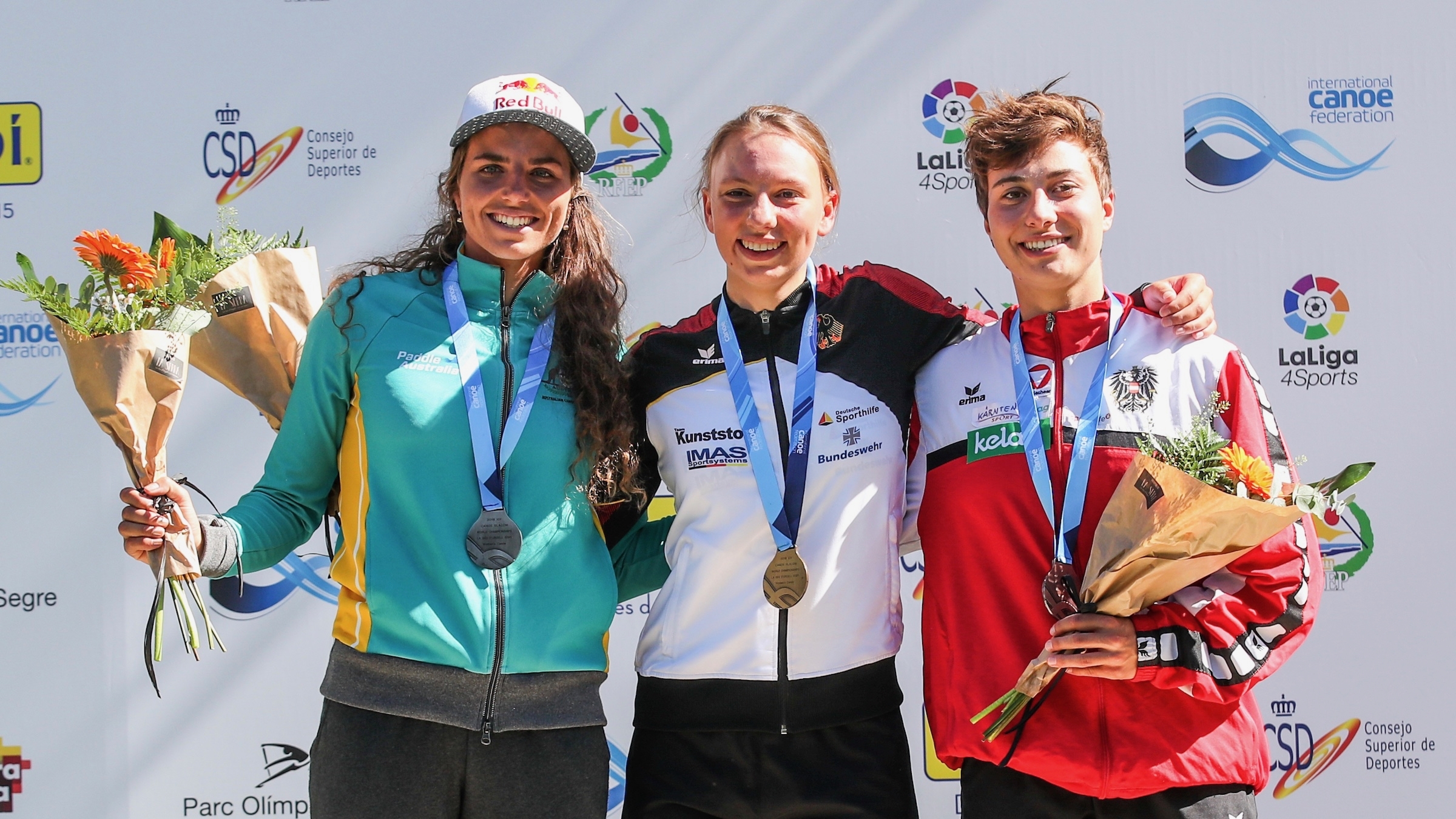 “I’m not quite sure what happened, but I slipped a bit in my run and touched gate three so obviously that’s a two seconds penalty that I had to chase the rest of the course.

“The rest of the run was attacking and apart from another little time loss under the bridge I think the run was really good and I’m really proud about that fight to the finish and obviously Andrea put down an incredible run. I’m very pleased for her winning her first world title and doing it in style.

“She went four seconds faster than the semi-final so I had to try and chase that. I almost got there but the touch obviously cost me. But I’m very pleased for a silver again today,” Fox said about her run and crediting her competitor.

A silver medal meant a new world champion in the class, but Fox was still happy with her performance at the world champs as well as the season overall that saw her once again win the overall C1 and K1 world cup title.

She has also worn the C1 world number 1 uninterrupted since 2013 which is an impressive statistic in itself. The two silver medals at La Seu brought her individual world championships medal tally to ten and her overall medals (including team) on world champs level to 15.

“Yesterday the K1 was a great run, Eva was better and she’s done an amazing finish and today Andrea blew us all away and I had to chase it. I’m still pleased with silver,” the 25-year old added. 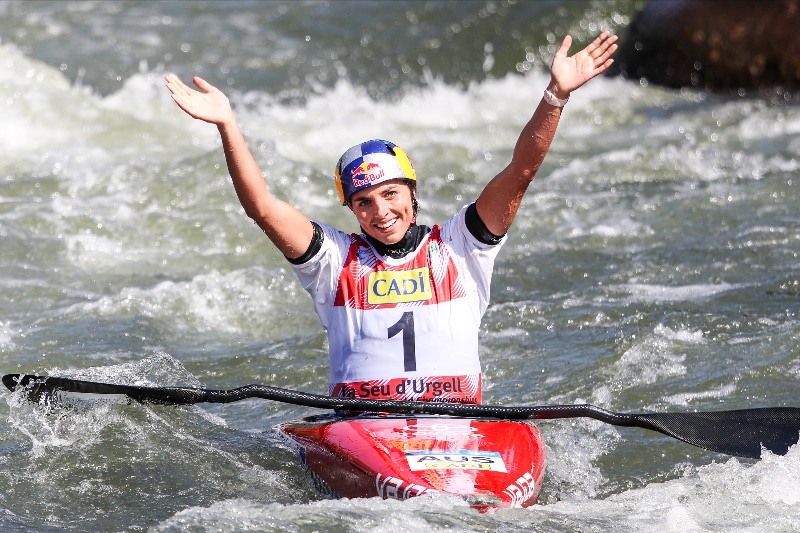 In the men’s K1 Rio Olympia Lucien Delfour locked away the Olympic quota spot for Australia by qualifying for the final following a sixth place in the semi-final.

In the final he was going for the attack and the win but a time loss at the bottom end of the course saw him drop into eighth place.

“I suppose eighth is better than not being in the final. But it was such a silly mistake that I did on the bottom of the course. It was probably because I was trying to go for the win, but sometimes those little mistakes just happen,” Delfour said self-critically.

Looking at the positives though, Delfour was happy to lock away the quota spot and focus on training for the Tokyo test event and national selections next with fellow team mates Daniel Watkins (TAS) and Tim Anderson (NSW) in the mix as well.

“The quota is secure for us, for the K1 men, which is great because we obviously want a K1 men at Tokyo and didn’t want to have to fight for the quota against the Kiwis at the Oceania Champs so this is the best situation,” Delfour explained.

“After the semi-final I was so relieved and so happy that we secured the quota. That’s so much pressure off the chest to know that the country has qualified, but it was a difficult day to say the least,” Delfour said.

“Now that’s all done and we can focus on the next steps with the test event in a few weeks and we will focus on selections. I’m so keen on going to Japan. I’ve always wanted to go there and the next months will be tough as we will all train hard and all of us will fight for the one spot. But that’s part of the game.” 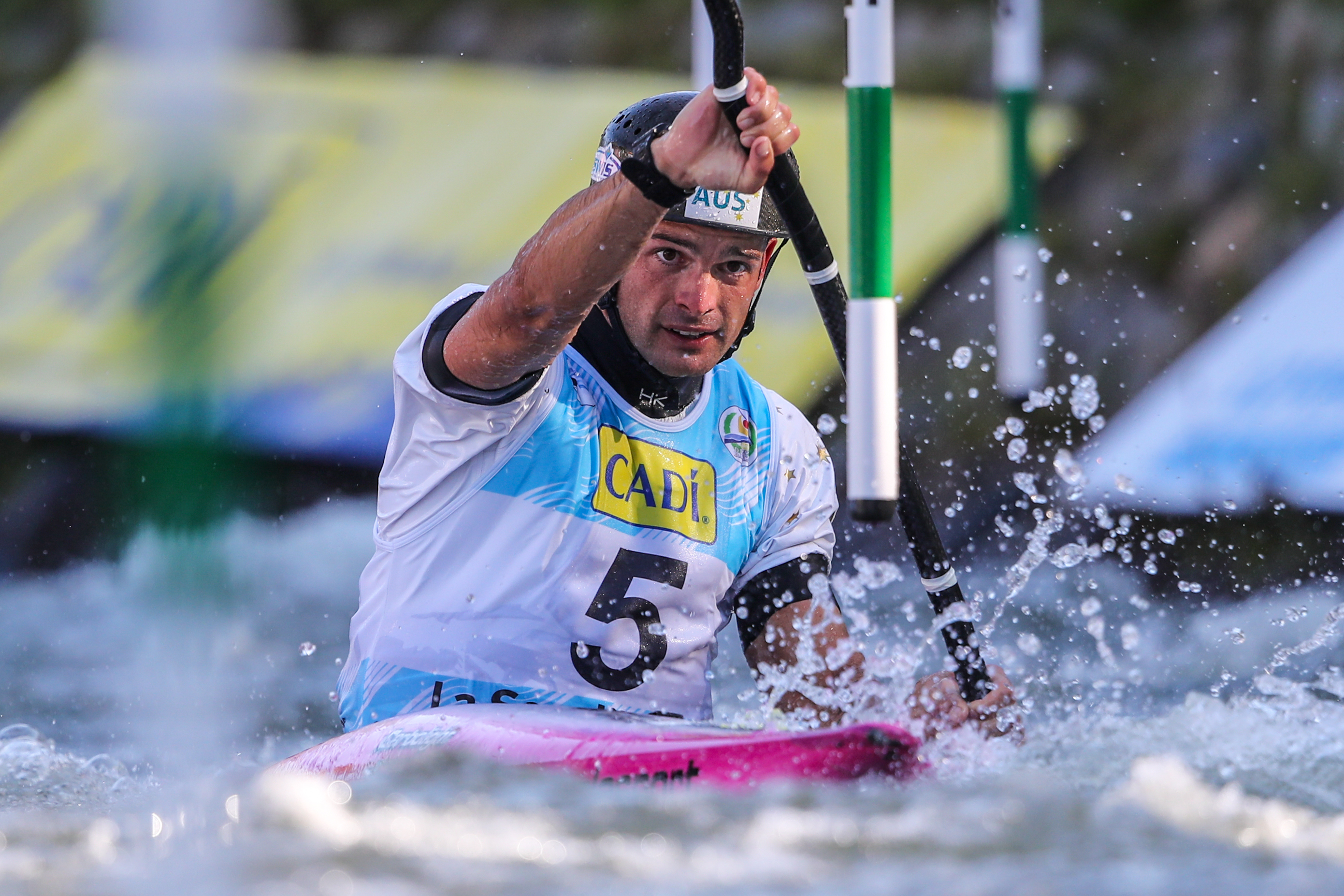 The Australian team will now head home with a small group of Jessica Fox, Lucien Delfour as well as Daniel Watkins and Noemie Fox to head to Tokyo in a few weeks for the test event.

While Fox has secured herself pre-nomination within the team, the fight for nomination and selection is still open on the men’s team.

The next and final opportunity for Australia to secure an Olympic C1 quota spot will be at the ICF Canoe Slalom Oceania Championships in Auckland at the start of February (1-3 February 2019) with final selections in both the men’s K1 and C1 events to be finalised following the Australia Open in Penrith at the end of February.

The biggest field of athletes in more than 15 years took to the waters of La Seu in Spain this week, with the double goal of becoming 2019 ICF canoe slalom world champion, and also earning their country a place at next year’s Tokyo 2020 Olympic Games.

No country is allowed to qualify more than one athlete per event for Tokyo, meaning in some disciplines athletes who finish outside the top 20 could still earn their country a ticket to the 2020 Olympics.

Jessica Fox won her tenth world title on Wednesday, when she took out gold in the women’s C1 team events together with sister Noemie Fox and Rosalyn Lawrence.

The most successful individual paddler of all time now holds four C1, three K1 as well as three C1 team world titles to her name.

Fox also won a total of 15 medals across individual and team events, including 10 gold.