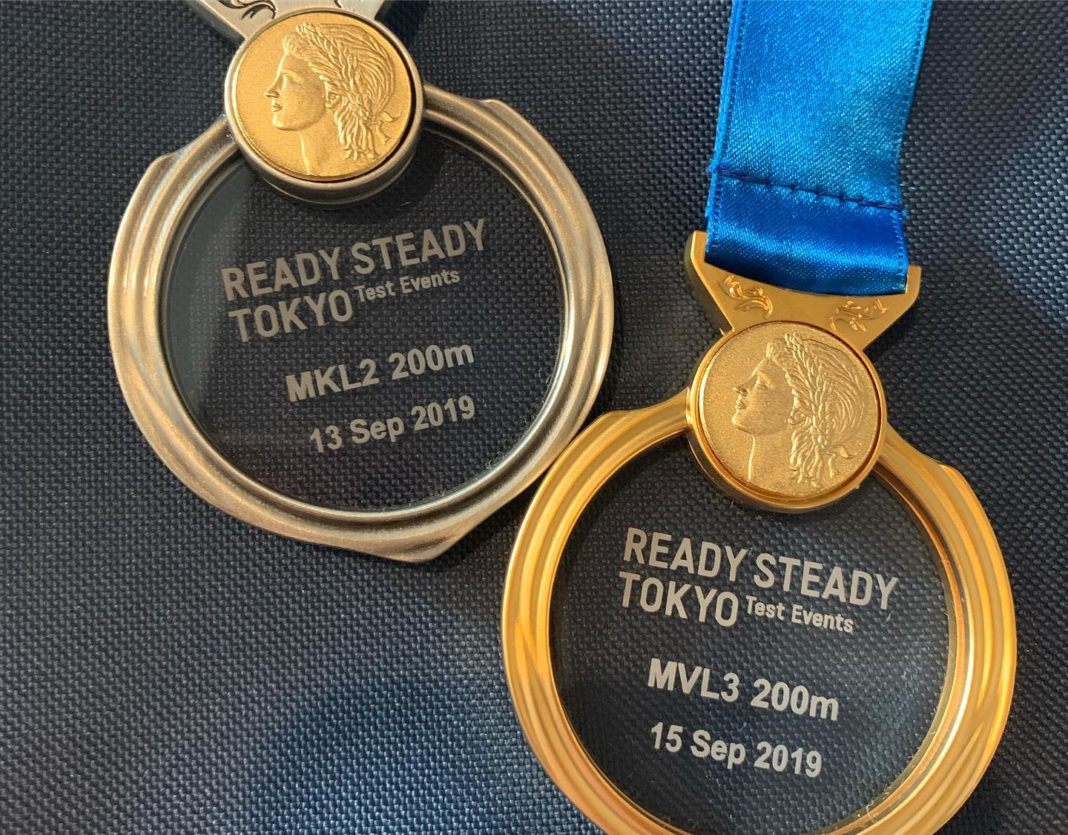 The 2019 Ready Steady Tokyo – Canoe Sprint and Paracanoe test event successfully wrapped up over the weekend (12-15 September 2019) with a selected group of Paddle Australia’s canoe sprint and paracanoe paddlers enjoying the opportunity to test the Tokyo waters and surrounds less than one year out from the Tokyo 2020 Olympic and Paralympic Games.

For Australia’s Paralympic champion and 2019 double world champion Curtis McGrath, who took home a gold (VL3) and silver (KL2), the VL3 gold on Sunday marked three years exactly since his 2016 Rio Paralympic gold medal and made the regatta extra special. 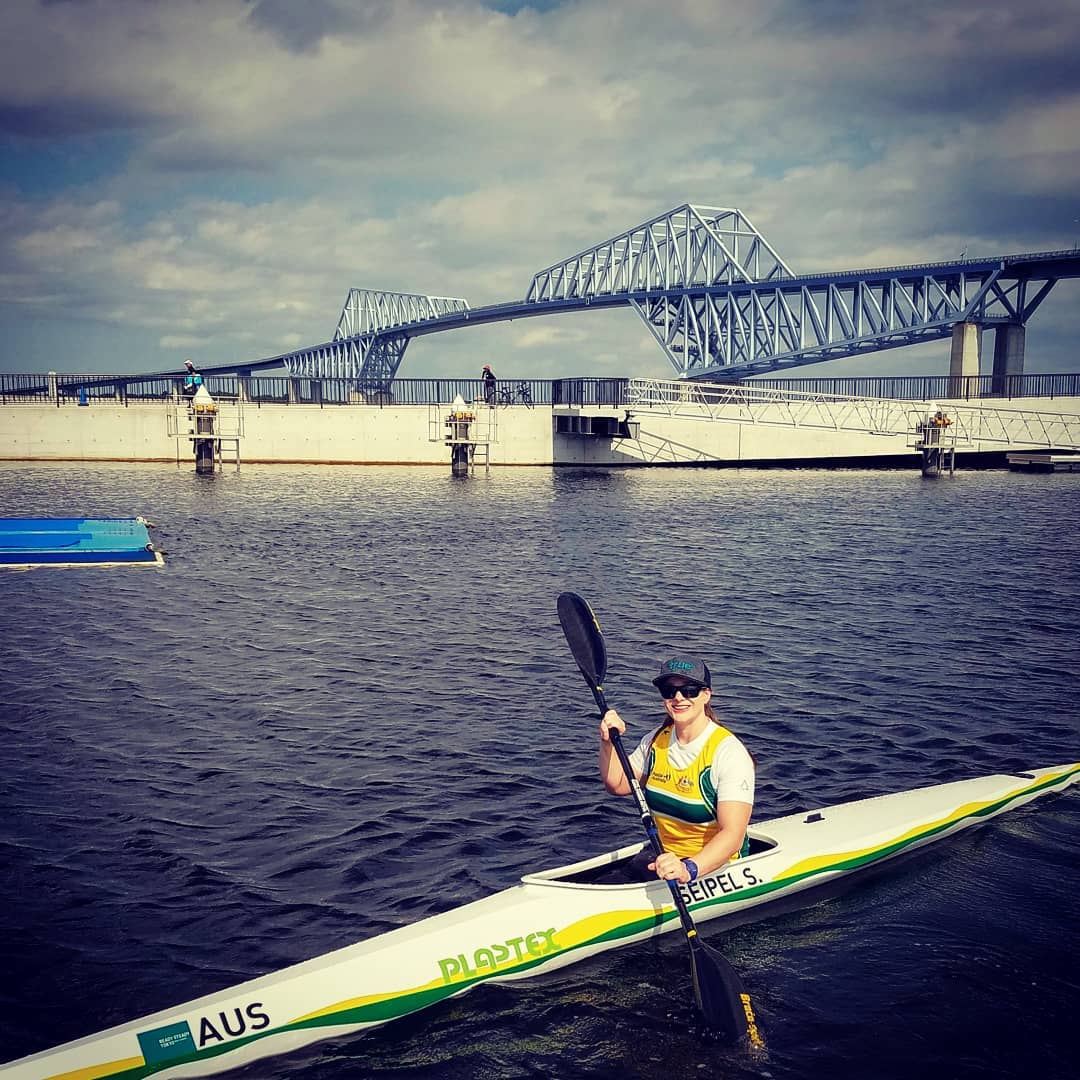 But while the team enjoyed the Tokyo medal celebrations, the regatta was not so much about performance, but more about the opportunity to get a feel for next year.

“It was cool to be here three years on from the 2016 Rio Paralympic Games. The feeling of being here in Tokyo on this day is special for me and it is nice to see the course and what the possibilities could be next year,” McGrath said.

Paracanoe premiered at the 2016 Paralympic Games and with the va’a, outrigger canoe, events added to the Tokyo 2020 program, McGrath will be aiming for two medals in a Paralympic field that is continuously on the rise. 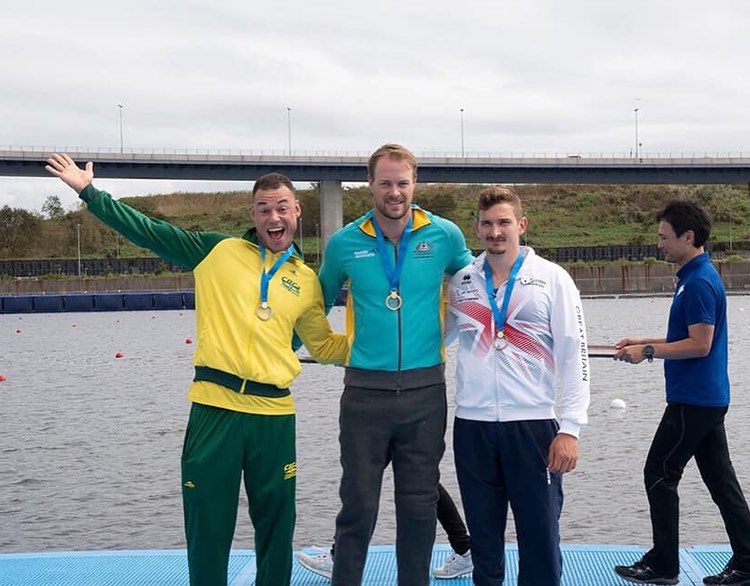 “The goals will need to be constantly raised. As we get closer to the games the competition will heat up making it harder to get on top of the podium. But that is sport and we all will need to work hard to be here next year with some bling,” McGrath said about the tasks ahead.

Sea Forest Waterway will be hosting the Olympic and Paralympic canoe sprint and paracanoe as well as rowing and para-rowing competitions next year, and while the reviews of the facilities that recently also hosted the 2019 World Rowing Junior Championships, were positive, everyone is also aware of the challenges next year will bring.

“Tokyo has been very good and the test event went really well. It was not as hot as I was expecting and the course is nice and easy.  The conditions were a little windy, head wind, so it made it a little harder racing. Every day we had a head wind and from what Junior Rowing World Champs learned it can be a very windy tail wind as well which will make racing tricky. So I think it will be important to train in windy conditions over the next year,” McGrath explained his takeaways for next year.

“There were a lot of fish on the course so hopefully they will move them out of the course because it got a little hectic with fish jumping and people hitting them with their boats and paddles. But overall, processes for the games were fine and I think the games will run very smoothly,” McGrath added about his observations. 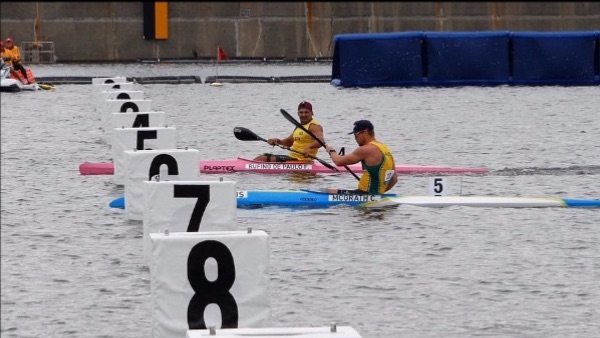 Fellow team mate and Rio Olympian Riley Fitzsimmons agreed, “It’s not a bad venue at all and compared to Rio it does have its challenges with the wind but that’s what comes with racing in the outdoors.  I think just knowing how unpredictable the conditions can be at the course has been a good experience. The wind picks up very fast and can change direction quickly so just being prepared for the unexpected is something we will be taking away for next year.”

Fitzsimmons secured the men’s K2 1000 quota spot for Australia together with Rio Olympian Jordan Wood at the world championships in August with a fifth place and is hoping to contest his second Olympic Games in Tokyo next year.

While performance at the test event was secondary, Fitzsimmons and Wood were still happy with a fourth place in the men’s K2 1000 following their post-world championships break.

“It was a really good performance, taking into consideration the time off we’ve just had. It’s been a tough season for us with a lot of close finishes just falling short of medals. As frustrating as they have been it has kept us feeling positive that we are close and it’s that little bit extra we have to find now,” Fitzsimmons said. 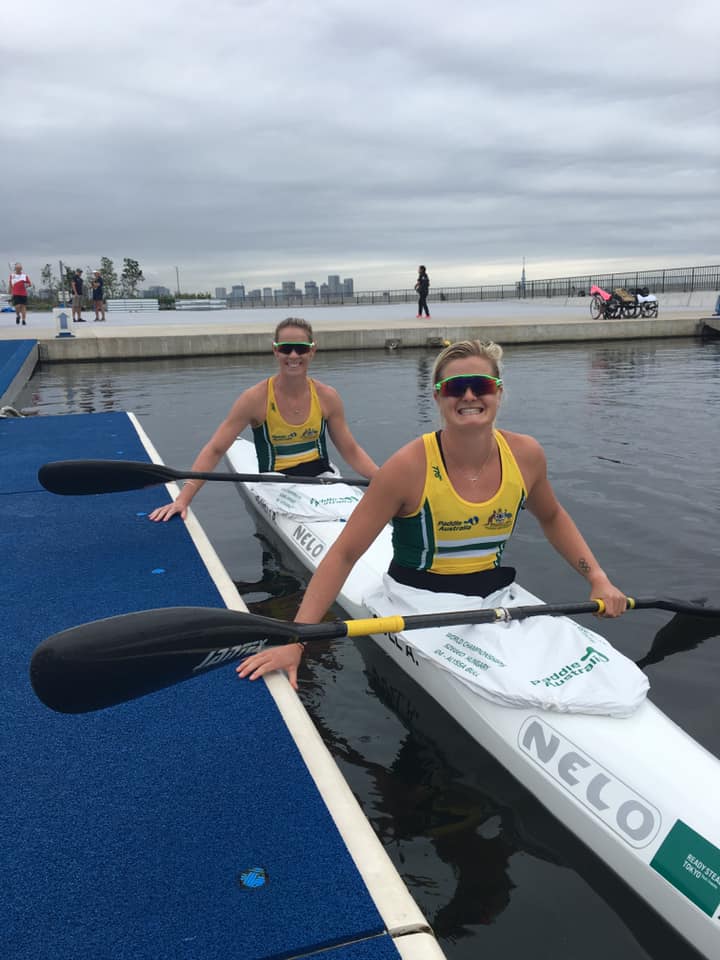 Fellow Rio Olympians Alyce Burnett and Alyssa Bull also raced the K2 at the test event and with four quota spots secured in the women’s kayaking events at the world championships, the K2 is one of the boats which will be considered for next year.

“We haven’t raced K2 internationally this season, so being back in it at an international event was very exciting! When we hopped in the boat it immediately felt like home which made racing very enjoyable. Fourth in the event against some solid crews was a great confidence boost, but it was more about being in a team boat on the Olympic course and getting to know the surrounds a bit more,” Burnett said.

With team selections only to be finalised in March next year, the focus at the test event was all about getting as much experience and information as possible about the venue, processes and surrounds.

“This event was all about getting a feel for Tokyo and what the Olympics will look like next year, and from everything we’ve seen I can guarantee it will be amazing. It’s also great to now know what the course looks like and how the water feels so we can train more specifically,” an excited Alyce Burnett explained.

“The course itself is very good, much better than expected. It’s built next to a shipping channel in between concrete walls, so we were worried about bounce but the deflectors they’ve installed are great which makes paddling a lot easier. 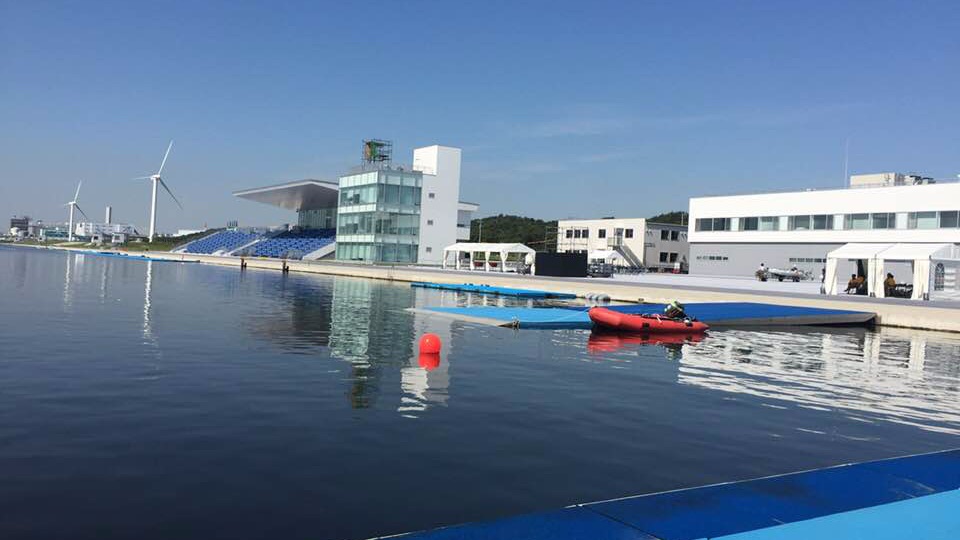 “The prevailing wind this week was a head wind, which is good to know as well. Off the water the facilities are of high quality with the boat sheds very spacious and athlete chill areas set up well. There’s nothing we could really fault here,” Burnett added.

While racing was scheduled for four days, there was also enough time for the team to explore Tokyo and (literally) get a first taste of what they can expect and get excited about for next year, should they secure their selection. 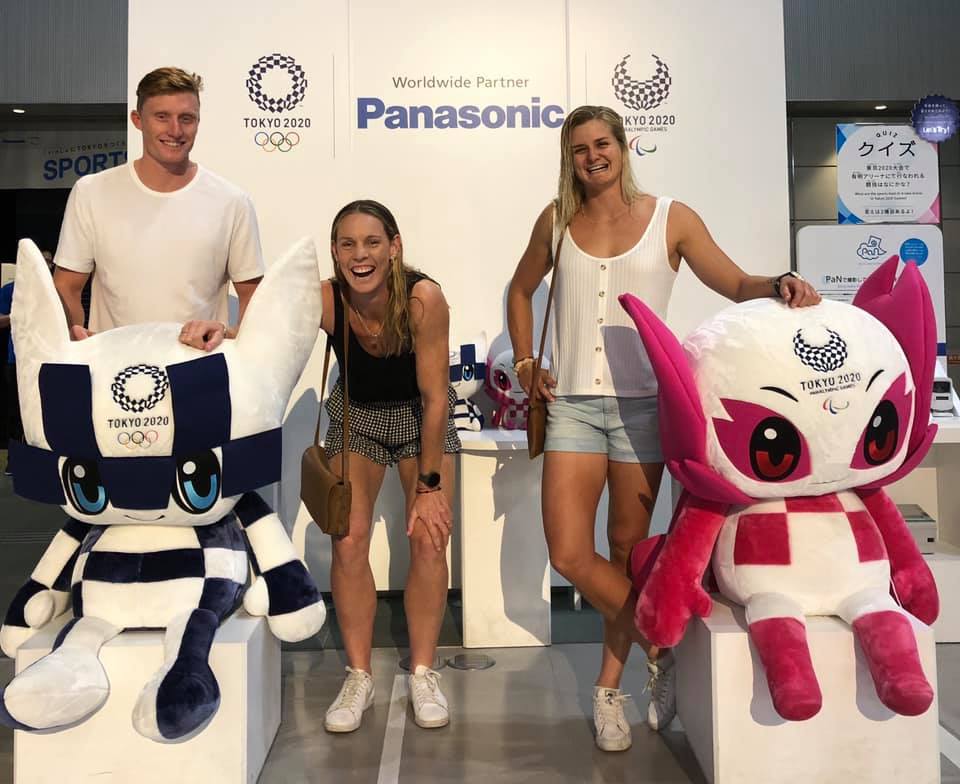 “Away from the kayaking venue, the whole city is getting into the Olympic spirit with signage up everywhere and last-minute touches being put on everything. Even the village is almost finished, and it’s huge! The main take away from this week for me is having an understanding of the logistics surrounding the racing as Tokyo is a huge city,” Burnett said. 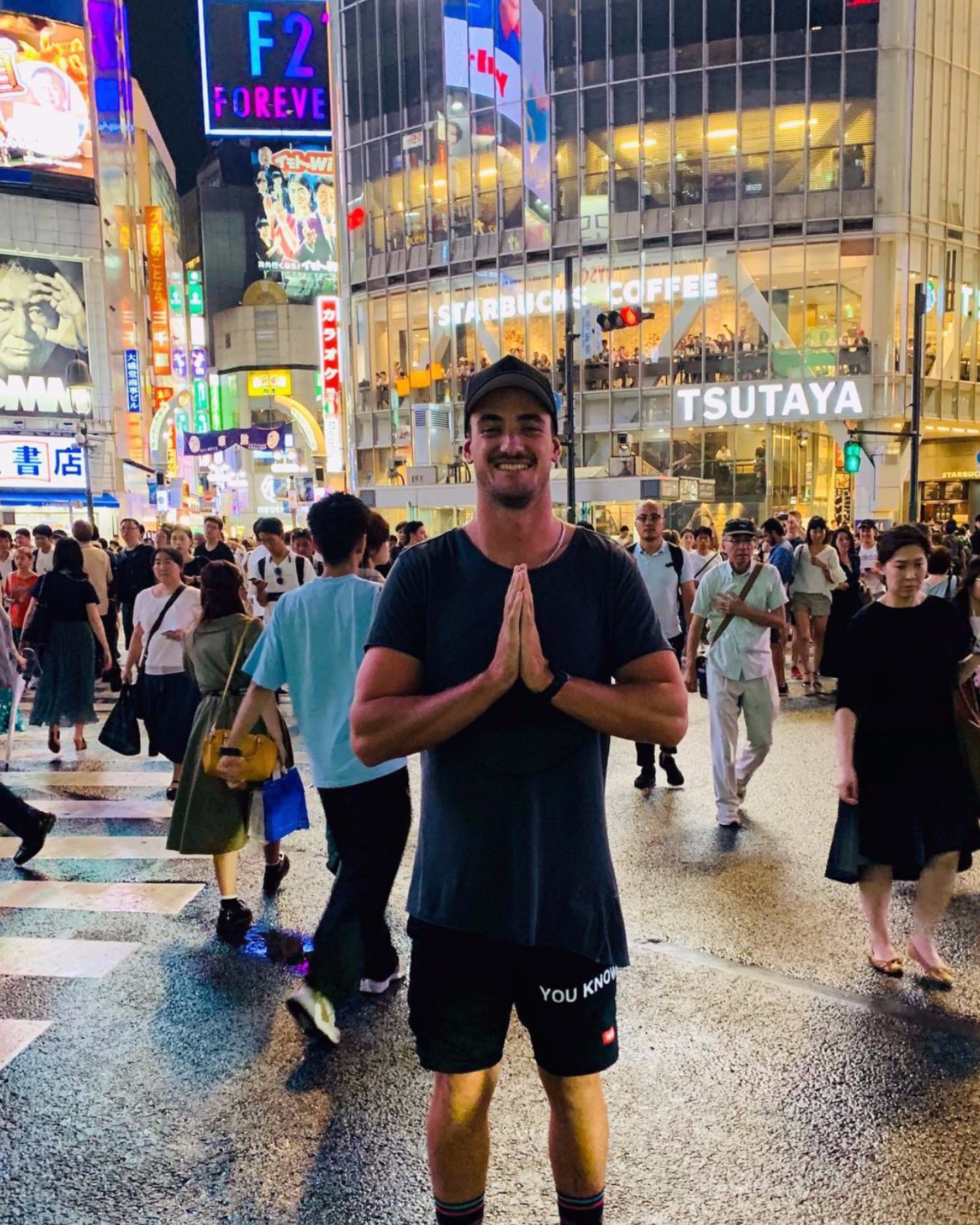 “It was a really good experience,” Fitzsimmons agreed.

“Tokyo is set up so well for the Olympics next year and should be a great host nation. It was so awesome to explore the city and take in the Japanese culture along the way.”

Most of the team is heading back home now for a bit of a break before getting back into training in preparation for the domestic season that will kick off again at the start of December.

Before then, Riley Fitzsimmons and Alyssa Bull will join the Australian Life Saving Team to also contest surfski events at the International Surf Rescue Challenge Title in Durban, South Africa.