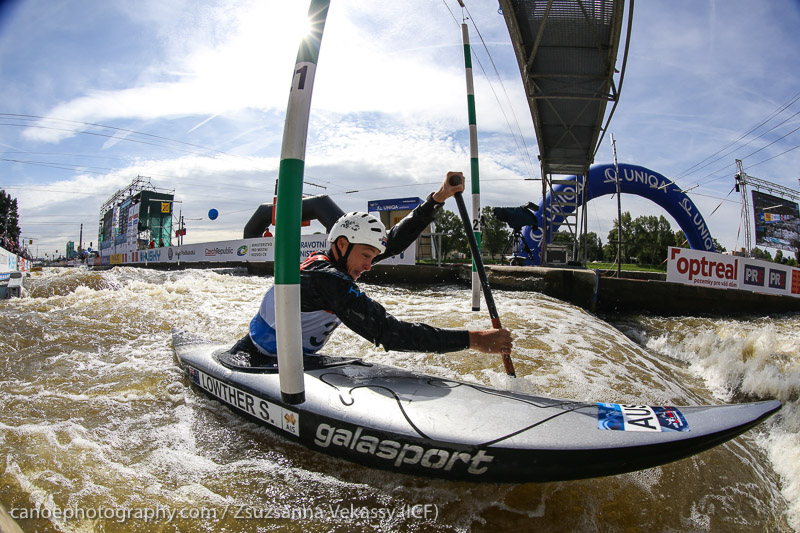 The Australian canoe slalom team has made a business-like start to the ICF canoe slalom world cup final in Prague, but are ready to bring out their best this weekend.

Defending K1 and C1 overall world cup holder Jessica Fox (NSW) once again led the way for the Australians, qualifying for both the K1 and C1 semi-finals on a challenging Prague course, while Lucien Delfour (NSW) and Daniel Watkins (TAS) are set to take on the best in the men’s K1.

Noemie Fox (NSW) and Ros Lawrence (NSW) also qualified for the women’s C1 semi-finals on Sunday, but missed out on progressing to the next round of the K1.

In the men’s C1, WA’s Steven Lowther enjoyed one of the best results of his career, qualifying for Saturday’s semi-finals on his second run, but Watkins, with two missed gates, and Ian Borrows (NSW), with three gate touches, both fell short.  Tim Anderson(NSW) also missed out of the next round after a 15thplace in the second run of the men’s K1. Jessica Fox said it was a challenging day.

“It was a solid morning, but not so great in the K1 on the top section, but I felt good in the C1, so happy to end qualification day in both semis,” she said.

“I’m looking forward to seeing what the course will be tomorrow, because it’s super technical here and it’s always a challenge racing here in Prague.”

Unlike a lot of her opponents, Fox has not missed any world cups this year. But she said she still feels fresh.
“The body is good, we’ve been training pretty hard in that gap between the world cups. It’s always a long season because our world championships are always so late, but I enjoy it, I like to do all the races, and if I wasn’t doing them I’d just be sitting on a course somewhere watching a race.” Delfour was 16thfastest in the men’s K1 and progressed straight through to the semi, but admitted it had been hard to bounce back after winning silver in Markkleeberg last weekend.

“I actually felt quite flat on Monday and Tuesday, I suppose from all the paddling on the weekend,” Delfour said.
“But apart from that I’ve been feeling okay this week. I was not super happy with the run in general today though.”

Tasmanian Watkins bounced back from two disappointing runs in the men’s C1 and a troubled first run in the K1 to post the quickest time on the second run late on Friday, booking his place in Sunday’s K1 semis.

“It was a very long and arduous day, really up and down,” Watkins said.

“By about an hour before my second run in the K1 I was pretty spent mentally and physically, but I was happy to get some good feeling this afternoon and qualify through to at least one semi-final.

“I started to feel more optimistic just before the final race, but it definitely takes a bit of a toll mentally after a run, it takes about half an hour to reset.” “It’s a little bit tricky, you kind of get in a good flow doing race after race each week. It’s good to have the opportunity to go and work on that stuff, but you need to start again and reset like you would going into world cup one,” he said.

Steven Lowther enjoyed one of his best career runs, finishing seventh on his second C1 run to book himself a place in Saturday’s semi-final action.

“First one on the senior team circuit for the year, and last one of the season so nice to pull it off,” Lowther said.

“I was a bit unsure about my time at the finish line, I wasn’t sure if it was going to be enough. I lost a lot of time on the last two up gates, so I was a bit concerned. But now that I’m through, I’m very happy.” Ros Lawrence finished 19thon her first run in the C1 to go straight through.

“It’s always good to make it through, I snuck through in about 19thso I wasn’t wasting any energy,” Lawrence said.

“In C1 I felt okay. I made a couple of big mistakes that cost me a lot of time. It’s pretty disappointing not making it into the semi of the K1, but I’m looking forward to the C1 semi.” Noemie Fox qualified in 17th for the C1, and said it was a tough run.

“It was a struggle, I find Prague really hard because the gates just come at you and you have to be really agile and adaptive,” she said.

“I struggled a bit so I’m so relieved to go through on the first run. In kayak, I felt solid but I’m just too cautious and lacking the speed. I’m kind of glad I got a practice run for the C1.”

Racing continues on Saturday, 7 September, with the women’s K1 and men’s C1 semi-finals and finals.