Heading into this weekend’s final in Prague, the race for individual 2019 world cup canoe slalom titles remains wide open with double points up for grabs in what promises to be a thrilling finale to the five-race world cup season.

All of the 2018 champions are still in the running to defend their titles, including Australia’s Jessica Fox,the reigning women’s C1 and K1 title holder, who is currently leading the C1 and sitting fourth in the K1.

Fox, who earned the title of the greatest female paddler of all time with a record-breaking 2018 season, finished last weekend’s canoe slalom world cup four in Markkleeberg, Germany with a silver (K1) and a bronze medal (C1) and is looking forward to returning to the course she won her first world title on.

“I like Prague and it’s such a cool course. I won my first world title there in 2013 and it’s always nice to go back there and the Czech are always so welcoming, so friendly and nice and they always put on an amazing show so I can’t wait to see what they have in stall for us for the world cup final,” Fox said.

The 25-year old has had a challenging world cup series this year, but still managed to consistently finished on the podium in most of the events.

“Last year was obviously the dream season, the perfect scenario and this year was more difficult. The courses were always really challenging and I didn’t put down some of my best runs and the girls were really good. The level is always rising and in a pre-Olympic year that’s to be expected as well, but I was happy to be on the podium last weekend and consistently on the podium. Obviously winning the gold is the goal but the process is what’s important too,” Fox reflected on the last four world cups.

Racing starts in Prague on Friday and Fox, who is the winner of last year’s women’s K1 world cup crown, will be heading into the event in overall fourth.

Following a silver and a bronze medal this season, Fox sits on 158 points and 22 points behind Austria’s Corinna Kuhnl, who sits at the top of the leader board on 180 points. Germany’s world cup four winner Ricarda Funk follows 15 points behind Kuhnl in second with Slovenia’s Eva Tercelj ranked third and with 120 points available for the winner in Prague final rankings are still wide open.

Fox is in a better position to win her third consecutive women’s C1 world cup title, holding a commanding 47-point lead heading into the final weekend. Fox has had a win and two thirds this year to accumulate 192 points, with Brazil’s Ana Satila sitting second on 145 points. Austria’s Viktoria Wolffhardt is third on 136, just ahead of Germany’s Andrea Herzog on 134.

In the men’s K1 and with 120 points available for the winner in Prague this weekend, technically any of the athletes currently sitting in the top 20 could take gold. Australia’s Lucien Delfour, on 83 points, picked up his first world cup medal, a silver, on the weekend and currently ranks 20thCzech Jiri Prskavec, currently leading the K1 standings on 199 points. 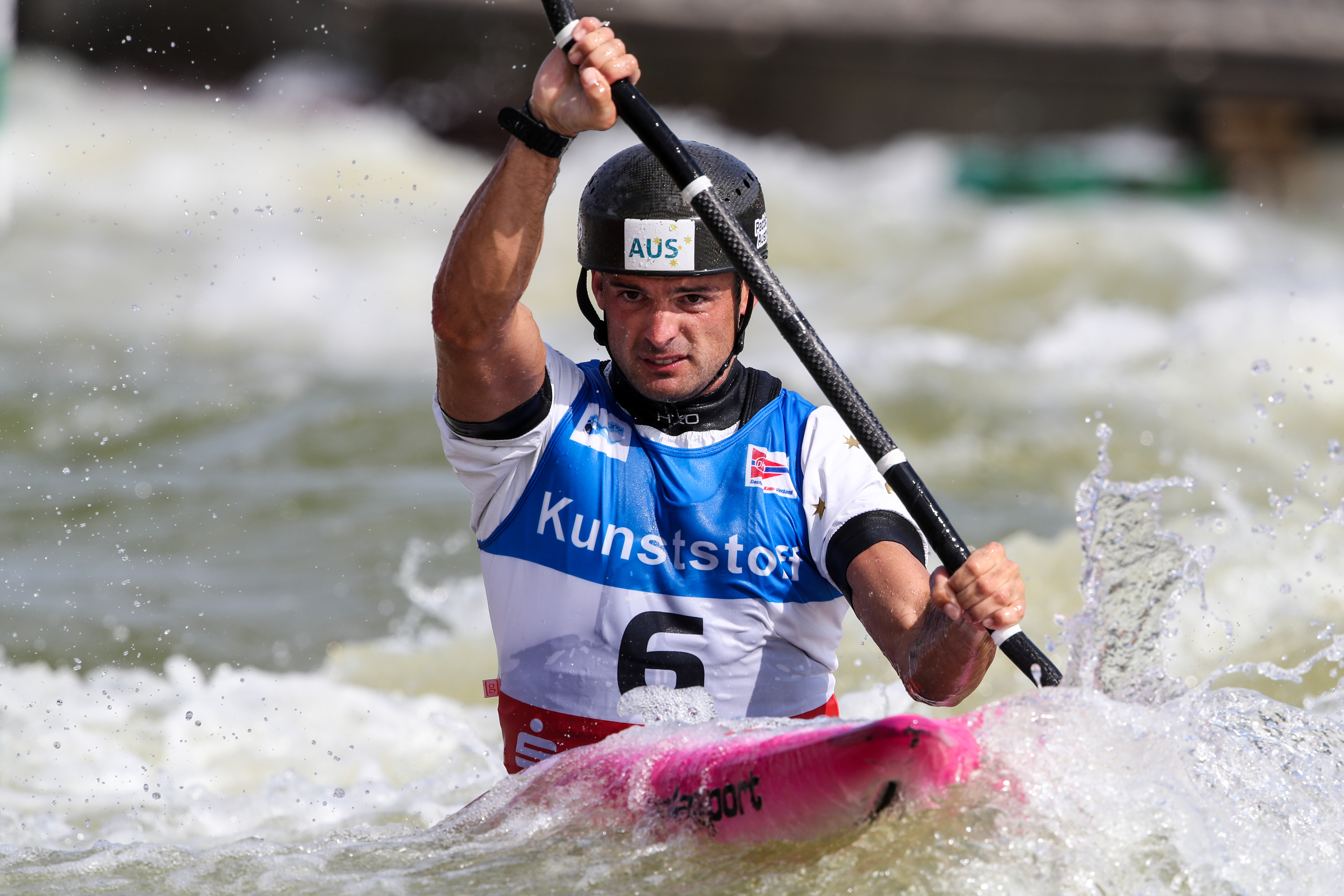 A theoretical chance is also still there for Daniel Watkins (TAS) who is ranked 15thin the men’s C1 on 79 points with Slovenian leader Luka Bozic holding 187 points.

The Australian team in Prague is completed by Noemie Fox and Rosalyn Lawrence who will join Jessica Fox in both the women’s K1 as well as the women’s C1. Daniel Watkins will also compete in both men’s events with Tim Anderson joining him and Lucien Delfour in the K1. In the men’s C1 Ian Borrows (NSW) and Steven Lother (WA) complete the Australian line-up.

First place this weekend carries with it 120 points, second will pick up 110, while third is worth 100 points. All athletes finishing in the semi-finals at least will get double points.