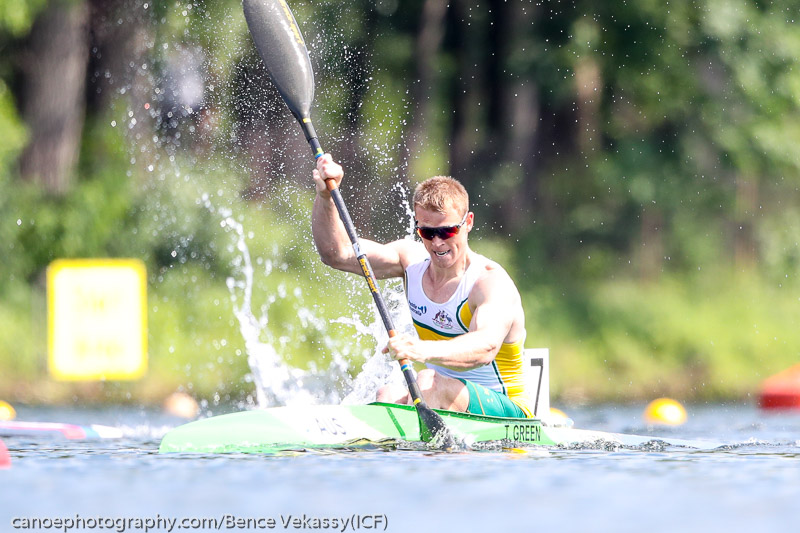 Tom Green turned a few days of ‘having fun’ into a gold medal when the big Australian powered over the 1000 metres to win gold at the 2019 ICF junior and U23 canoe sprint world championships in Pitesti on Friday.

Green has been talking down his chances all week in Romania, but there could be no denying the 20-year-old in the race for gold. His victory was followed a short time later by a silver medal for Jean van der Westhuyzen and Jackson Collins in the U23 K2 1000.

The Queensland trio will team up with 2016 Olympian Riley Fitzsimmons on Saturday in the heats of the U23 K4 1000, giving Australia a strong chance of another medal.

Green said he was hoping to use this week as an opportunity to develop his skills further ahead of the senior world championships, but from his first heat win it became obvious he was the man for the rest to beat. He took the lead early in Friday’s final, and never looked in danger.

“It was good fun, but it was also a bit tough,” Green said.

“There was a bit of wind in that race, and also a bit of weed, but it was fun. I was trying to have control, to go out and stay in control for the whole thing. It worked and definitely helped me throughout the race.”

Green tasted success in the U23 K2 1000 last year alongside Joel McKitterick, and says his win on Friday is a big step in his overall development.

“It’s one of the pieces of the puzzle,” he said.

“At the end of the day it all helps, these little things you learn from each event.”

Green surged on to the international scene in 2018 and following his u23 gold, he also made theA final at his firstsenior world championships in the men’s K1 500 and finished fourth in the men’s K4 500 together with Olympians Riley Fitzsimmons, Jordan Wood and Murray Stewart.

This year, Green will once again contest the senior world championships, which will also be the Olympic qualification event, as will newcomers to the team Jackson Collins and Jean van der Westhuyzen.

Van der Westhuyzen and Collins pushed the Hungarian gold medallists all the way to the finish, but could not quite get their noses in front.

“We’re pretty stoked, but obviously we were going out there for the gold,” van der Westhuyzen said.

“We didn’t execute our best race, but a silver medal, we can see the silver lining there, so we’re pretty stoked.”

Collins said it was a challenge in their first world championship final together.

It Is the first World Championships medal for the 20-year old former AFL player and surf ski paddler Jackson Collins, who is the son of four-time Olympian and dual Olympic medallist Daniel Collins and only switched to kayaking last year.

Jemma Smith (NSW) also made her mark on Saturday, qualifying for the final of the women’s U23 K1 1000, and then fighting all the way to the finish to cross the line in sixth position.

Racing continues today with the event wrapping up tomorrow.