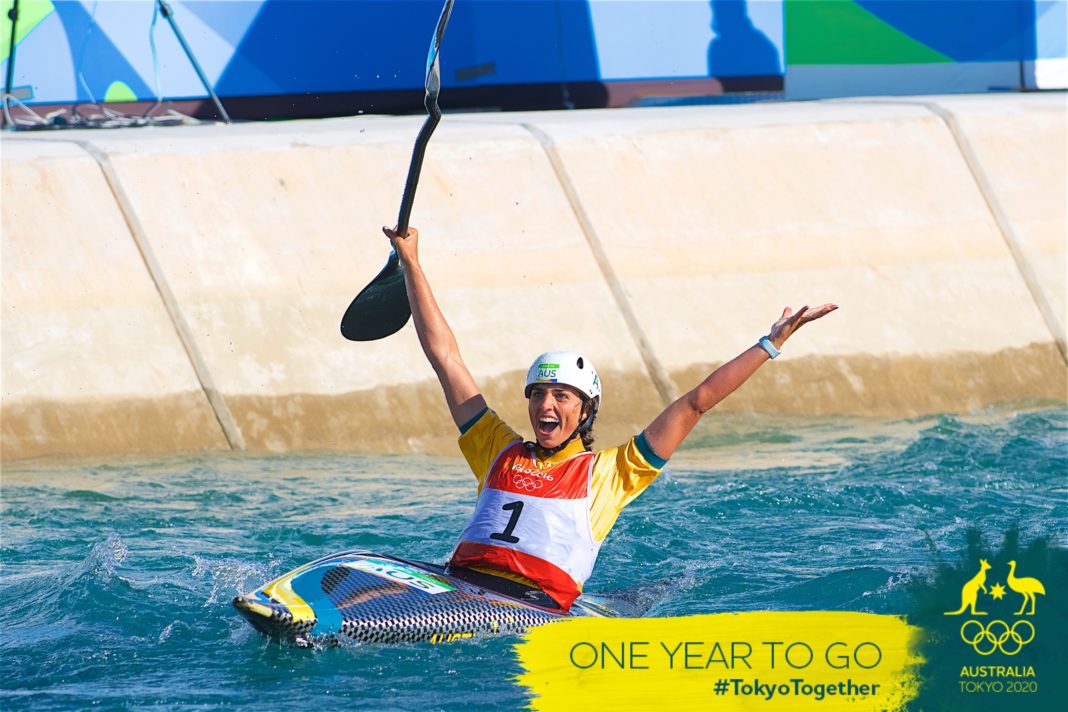 The count down is on with only 365 days to go to the Tokyo 2020 Olympic Games and our Olympic canoe slalom and sprint paddlers are excited to celebrate this day in their training camps across Europe, where they are currently preparing for the major Olympic qualification events coming up in a few weeks!

Follow their journey to Tokyo 2020 and subscribe to our “Paddle To Tokyo” Newsletter for all the recent news. .

You can subscribe via the link in the top left corner.

We are looking forward to paddle to Tokyo together with all our partners, supporters and the wider paddling and sporting community over the next 12 (Olympic) and 13 (Paralympic) months. Get behind the team and join the conversation using #TokyoTogether #auspaddleteam

AOC CELEBRATES ONE YEAR TO GO TO TOKYO 2020 OLYMPIC GAMES

With one year to go to the Tokyo 2020 Olympic Games, the Australian Olympic Committee (AOC) hopes to send the biggest Team ever to leave our shores next year.

While the Sydney Olympics saw 632 Australians compete on home soil, the 2004 Athens Games hosted 482 Australian athletes – and that figure remains the record for a Games off-shore.

Australia’s Chef de Mission for Tokyo, Ian Chesterman AM, says right now our athletes both at home and abroad are attempting to qualify for the 33 sports that will be represented in Tokyo.

“Every day, somewhere in the world, there are hundreds of Australian athletes training and competing with the sole focus of fulfilling their Olympic dream in Tokyo,” Mr. Chesterman said.

“It’s an enormous credit to these athletes, their families, supporters and the sports who have backed them on this journey, that we can even consider sending a Team of this scale. I wish them the very best over the coming months as they look to qualify for the Games.”

“My job, along with Deputy Chefs de Mission Susie O’Neill, Kim Brennan, Evelyn Halls and our support staff, is to give every athlete selected the best chance to do their best on their biggest day,” Mr. Chesterman said.

“We have worked very closely with the National Federations to create a performance-focussed environment for our athletes.”

AOC Chief Executive Officer Matt Carroll issued a call for Australians to join in the biggest and most exciting celebration of sport that the Tokyo Games will be.

“The one-hour time difference between Tokyo and Australia is a huge bonus for Australian fans. It’s the closest thing to a home Games.

“Australians have a great opportunity to support their Team and the Olympic competition in real time. It will be the most watched Games in history via Channel Seven and digital platforms.

“To that end, we are working with governments, organisations, sports and our commercial partners to deliver live site opportunities and other celebrations around the country during the Games.

“We want people to come and have a go at Olympic sports, which offer so much diversity. There are 33 sports in the Tokyo programme and exciting new events that will make this such an exciting Games.”

“Depending on final qualification, the AOC expects our Olympic Team will see an equal number of women and men selected for Tokyo which is an exciting thing for us.”

Mr Carroll thanked the AOC family of partners for their support in assisting the Team in its Tokyo journey.

“The AOC neither receives nor asks for Federal Government funding to send our Team to the Games.

“But the generous, ongoing support of our sponsor family, our Team Appeal efforts in the business and broader community including State Governments, and allocations from the Australian Olympic Foundation, all contribute to the $22 million it costs to send this Team to the Olympic Games in Tokyo.”

The AOC has adopted the #TokyoTogether hashtag, which recognises that every athlete’s journey to Tokyo represents not only the dedication and persistence of the athletes themselves, but also the ongoing support of their family, friends, sports, coaches, state institutes, sponsors and their communities.

July 24th not only marks one year until the Opening Ceremony of the Tokyo 2020 Olympic Games, it’s also the day on which Australia is formally invited to participate in the Games by the International Olympic Committee. That invitation will be issued to AOC President John Coates AC in a ceremony in Tokyo this afternoon.

Today also marks the first edition of the Tokyo Unleashed podcast, hosted by Olympian David Culbert which will run every week between now and the Opening Ceremony next year.

David will interview dozens of Australian athletes over the next year to bring their stories to life ahead of the Tokyo Olympic Games. Download the first episode of Tokyo Unleashed HERE.