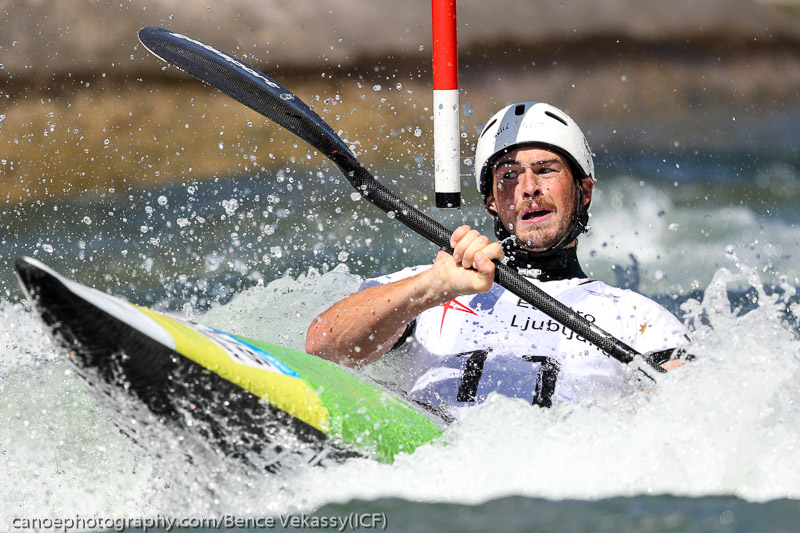 Daniel Watkins finally gave the canoeing world a glimpse of what he is capable of, and Jessica Fox is close to returning to her form of 2018 after an impressive opening day for the Australian team at the third ICF canoe slalom world cup in Tacen, Slovenia, on Friday.

Watkins and Fox showed their class by bouncing back from a disappointing weekend in Bratislava (World Cup 2, 21-23 June)  in stylish fashion in Ljubljana, with Ros Lawrence, Lucien Delfour and Noemie Fox also earning their places in weekend semi-final action.

After teasing at the opening two world cups with super-fast runs, only to cruel his chances with careless gate touches, 23-year-old Watkins set an error-free time of 82.14 in the C1 on the short Ljubljana course.

“I was really happy with that qualification, but a little surprised with how well it stacked up,” he said.

“I always surprise myself when I paddle well – sometimes it can feel like I’m really controlled and really patient and not going crazy fast, and then the actual speed on the boat proves to be really strong.

“Being qualification I guess I relaxed a little bit, and took those split seconds to make sure I was really safe around the poles.”

Fox was more than four seconds quicker than the next best paddler in the women’s C1 qualifying, and only just missed out on fastest time in the first round of the women’s K1.
“I didn’t expect to replicate 2018, but I think there have been some good parts to each world cup,” Fox said.

“It’s not going to be the perfect 2019 like I would have liked, but every race is a new race. I don’t judge the season off the first race or the second race. It’s four months overseas for us, so you have to ease yourself into it.”

Joining Fox in the C1 and K1 semis will be Ros Lawrence, while sister Noemie is through to the semis of the C1.

“It’s just nice to be here in Tacen, I love this course,” Lawrence said.

“The drop at the beginning is so fun, and it’s lush and green, and Slovenia is just such a friendly country. It’s a pleasure to be racing here.

“It’s been an enjoyable week because I’ve ben training here. Last weekend is in the past, so I’m looking forward to more racing and training.”

Delfour once again showed his speed in the men’s K1, recording the eighth fastest time. He believes there is plenty of time to make up on the weekend.

“I don’t think I had a bad run, but crossing the finish line I was a bit disappointed with my time,” he said.

“Crossing the line I was about four seconds off the pace, which is quite a bit in the K1 men. I would have liked to have been a bit faster, but it’s just the qualifiers.”

In other results, Tim Anderson picked up a 50 second penalty on his second run in the men’s K1 and will miss the weekend’s racing, while Steven Lowther and Tristan Carter both ran into trouble in the men’s C1 and will also miss the semi-finals.

Noemie Fox had three gate touches on her second run in the women’s K1 to put herself out of contention for a semi-final position.

See the race schedule HERE.
Racing can be followed live on canoeicf.com

Ljubljana is the third of four World Cups, followed by a World Cup final. The circuit will take a two-months break after Slovenia with the series continuing at the of August in Markkleeberg, Germany, 30 August-1 September