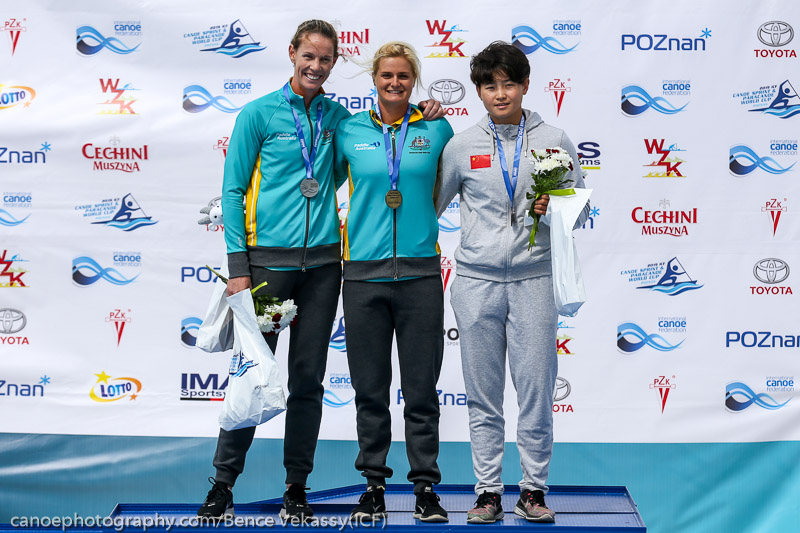 Australia picked up one gold and two silver medals on the penultimate day of the ICF Canoe Sprint World Cup in Poznan, Poland, with several other encouraging performances.

It was a gold/silver quinella for Australia in the women’s K1 1000, with best friends and K2 partners Alyssa Bull and Alyce Burnett leading the rest of the field in the windy Polish conditions.

Bull managed to edge out Burnett for the win, but said it was not important who won.

“It was good to AB next to me. We really wanted to go one-two on the podium today and we are just happy we did that and we really didn’t care what order,” she said.

“Obviously you always race to win and that’s what we were doing and I’m stoked with the one two. But to be a little bit honest, I’m ready to hang up the 1000 now and go to some sprinting,” Burnett said.

In the very next race Australia’s Jordan Wood and Riley Fitzsimmons took the silver in the men’s K2 500, narrowly missing the gold medal. They also used the race as a warm-up for the K2 1000 semi-finals later in the day.

“It was a good race, we had a pretty solid plan and I think we executed that pretty well,” Wood said.

“The conditions out here this week are really difficult, so the more time you get to spend out here the better. We learned a lot from our heat yesterday, and we hope to execute that this afternoon.”

“We definitely left it all out there on the water. It was pretty tough in that last 200, just to stay in the boat. It was like being back on the ocean again.,” Fitzsimmons said.

In the men’s K2 1000 semifinal the pair finished third to progress through to Sunday’s final.

The two Australian crew boats will have to settle for B finals on Sunday, after both K4’s narrowly missed A final qualification.

In other results on Saturday, teenager Tom Green went out hard and fought to the line to finish seventh in the K1 1000 and Rio 2016 Olympic bronze medallistLachlan Tame wrapped up his comeback to the international racing circuit with a sixth place in the K1 500 final, while teammate Matt Goble finished seventh.

Jo Brigden-Joneswas first and Cat McArthur fourth in the C final of the K1 200, while Jean Van Der Westhuyzen was third in the B final of the men’s K1 1000.

Saturday also saw the paracanoe events wrap up with Dylan Littlehales narrowly missing out of a medal in the men’s KL3 final by 0.07 seconds.

Head to @auspaddleteamon facebook for all the interviews & race clips from the event.