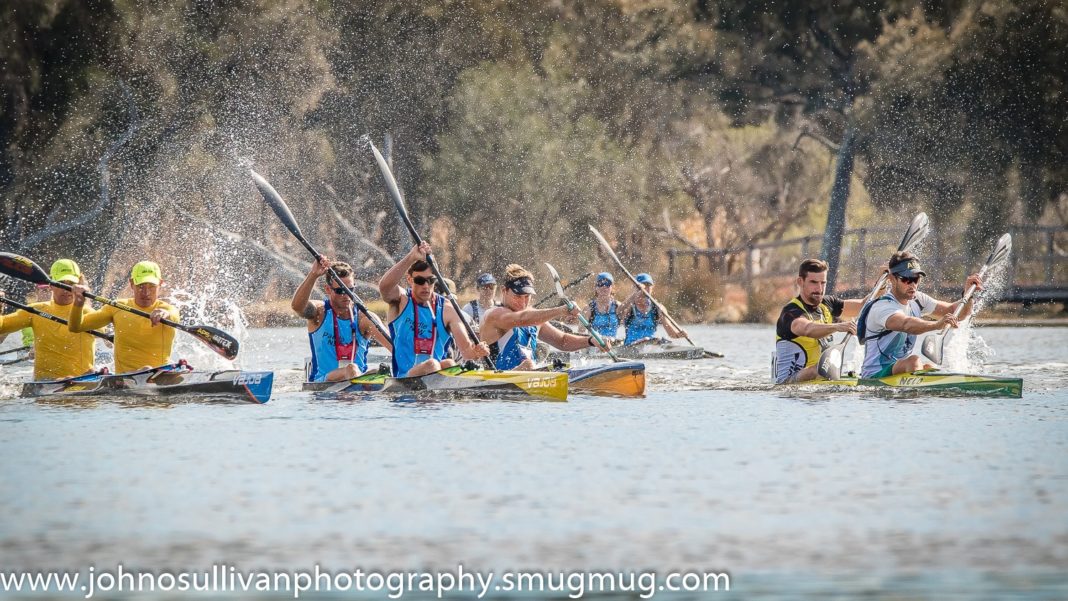 The championships were hosted by Ascot Kayak Club and Paddle WA on the Swan River in Perth with 286 competitors from all over Australia and New Zealand enjoying a course that was designed to showcase the key moments of a marathon race. The portage and finish line were both located front and centre to the club house, getting spectators right up close to all the action and creating a carnival atmosphere over the two-day event. The championships that featured paddlers of all ages, from eight years old to 80 years young, was blessed with sunny weather all weekend, little wind, but chilly mornings.

Saturday, saw the singles take to the water with the biggest start of the weekend in the Masters and Juniors events on Saturday morning with over 180 competitors. See results below.

The open events followed in the afternoon with Western Australian Josh Kippin taking out the Open men’s kayak, with last year’s winner Glenn Rypp following in second. Victorian master’s paddler Mike Leverett impressed with a third place over the 30km. Victorian Hamish Young won the U23 division in the men’s K1 over 26.3kms while Josh Burton won the U18 men’s K1 over 22.6km. Queensland’s Tegan Frazer won the open women’s K1 ahead of Victorian Kate Leverett. The open women’s C1 race was won by Victoria’s Reka Abraham ahead of Isabella Rositano (QLD). Alana Johnson (VIC) won the U23 division over 22.6km, while Nicci Vesely (NSW) won the U18 race.

Saturday closed off with the highlight of seeing 23 novice paddlers take part in the eight kilometres novice race and making the event a great introduction to racing for new paddlers.

On Sunday, the doubles took to the water with the open men’s K2 on Sunday afternoon one of the most anticipated events. Open K1 winner Josh Kippin teamed up with London canoe sprint Olympian Jesse Phillips to take on the eleven starters with just seven boats completing the gruelling 30km distance that threw some challenges at the competitors.

And it was challenges local race favourites Kippin and Phillips had not bargained for with the pair suffering steering trouble throughout the race after breaking a rudder cable. This made for some dramatic scenes when at one point during the race Kippin was out of the boat, chest deep in water holding the rudder straight while Phillips fixed the cable. Phillips and Kippin considered to pull out, but decided to keep going. Instead the pair showed their class, put the pressure on and worked their way from over two minutes behind back to the front of the pack. They kept closing that distance over the remaining few laps and ended up only 30.5 seconds behind the winners from Victoria Hamish Young and Isaac Johnson, who took out gold, after maintaining a healthy lead for most of the race.  The silver medal and a consideration for selection on to the 2019 Canoe Marathon World Championships team was the reward. The NSW/WA combination of Brett Greenwood and Brett McDonald was third. For the first time in a very long time host state Western Australia took a clean sweep of all trophies being handed out over the weekend, including the Recreational Class Trophy, the International Class Trophy and the Frank Whitebook Trophy. Western Australia also took out the Interstate Challenge Trophy by 1.5 points with long standing winner Victoria following in second.

The event would not have been possible without the support of a fantastic group of volunteers, who delivered an impressive championships. Paddle Australia Canoe Marathon Technical Committee Chair, Jerry Dunn was ecstatic about the number and quality of the volunteers this year. Volunteers are the backbone of the sport, and this year’s marathon championships were no exception. The success of the event was testament to the hard work and direction of Project Coordinator Doug Hodson and his team. Dunn said that “Whether he realises it or not, Doug has created a legacy for marathon racing; with a number of new documents on the project management for the event, plus sponsorship packages which we can now share with rest of the states.”

The 2020 Australian Canoe Marathon Championships will be hosted in mid-late April on the Barwon River in Geelong.

2018 Marathon Paddler of the Year – nominations received from paddling peers