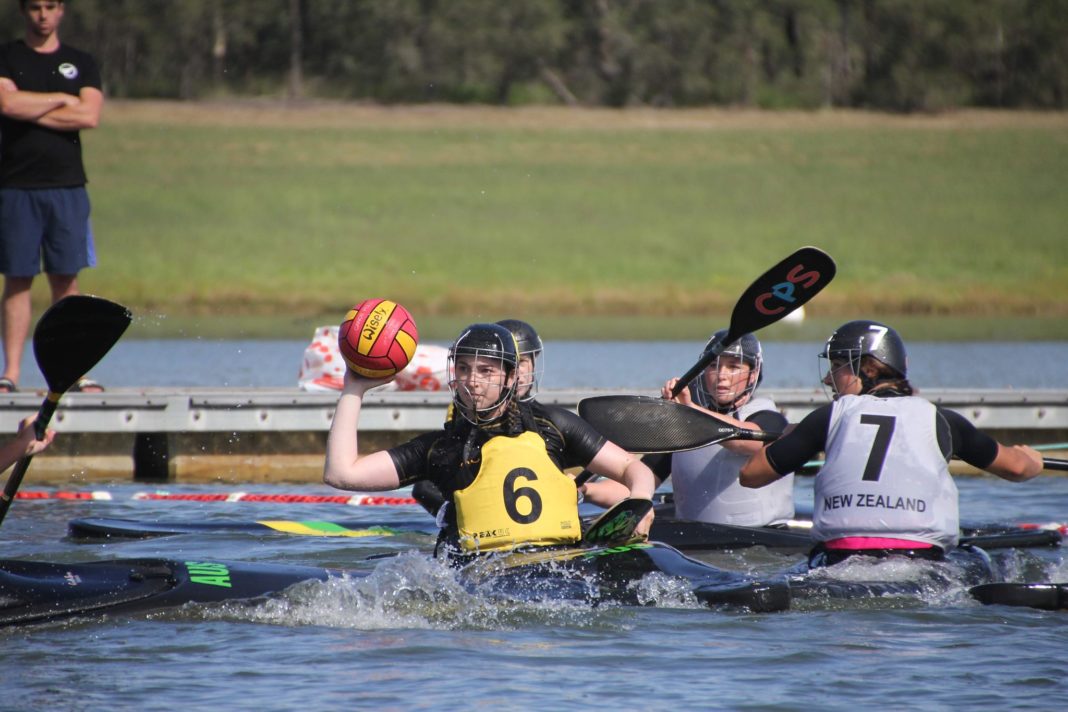 The Easter and ANZAC Day weekends marked the highlight of the Australian Canoe Polo calendar, with both the National and Oceania Championships held across six days on the Nepean River at the Penrith Whitewater Centre.

The Australian National Championships saw the return of Tasmania to the mainland competition circuit, an exciting progression considering the strong player numbers and interest in competing at a higher level within the Tasmanian Canoe Polo network. Prior to the Nationals, support such as refereeing workshops, training camps and equipment had been provided to prepare the three Tasmanian teams (Junior, U21 and Master’s) that would be attending the Nationals, as well as encourage further participation within the polo community. The NSW Women’s Team also returned to the Championships, contributing to a record number of five state teams within the Women’s division.

The Youth division also demonstrated growth as states progressed previous Junior players to compete in this development grade, with New South Wales and Tasmania new additions to the division. The inclusion of six junior teams (including three Queensland teams) also consolidated these strong player numbers at the younger end of the spectrum, with many encouraged and inspired by the opportunity to compete against New Zealand.

The addition of New Zealand teams to all divisions boosted the competition and was an excellent opportunity for teams to compete against a highly skilled and experienced side. It was also exciting to play new and unfamiliar competitors, as the smaller nature of Canoe Polo results in players becoming familiar with each other and how they play. The experience of competing against overseas athletes was particularly beneficial for those aspiring towards National Representation, as it provided insight into the skill level and nature of Canoe Polo internationally. The awarding of the State Trophy to Queensland demonstrated the strong growth they have achieved, from originally entering Junior teams at earlier Championships, to now having players progress through the ranks and fielding teams from Juniors through to Open Men’s and Women’s, as well as having players representing Australia at the 2018 World Championships and 2019 Oceania Championships. Similar to the re-emergence of Tasmania at the Championship level, it was also exciting to see Queensland field a Junior Women’s Team, as it reflects well upon Australia’s long-term prospects regarding female player numbers, and our goal to potentially enter Under 21 teams (Men’s and Women’s) at future World Championships.

The Oceania Championships were the culmination of months of intense training and a summer of training camps to prepare teams for competition who consistently rank highly internationally. Both nations contributed teams from Under 18 to Over 45, and New Zealand’s commitment to sending such large player numbers were commendable and provided excellent competition for Australian althletes. As Australia seeks to develop and rebuild their National Teams, having such a high quality competition on home soil allowed participation from many Under 18 and 21 players who may not yet have experienced such a high standard of play and the opportunity to compete against an international team. All teams competed with grit and determination, remaining positive regardless of the result, and developing both individually and as a team. The competition was useful in determining key areas for Australia to focus on developing, which was addressed through coach feedback and through future training camps and individual training sessions. Close results came from the Australian Men’s A Team’s 2-3 loss to New Zealand Men’s A in the Grand Final, as well as the Australian Over 30 Men’s A Team’s victory to achieve Gold for Australia.

The timing of the Oceania’s was favourable in that it encouraged players to consider nominating for the 2020 World Championships in Rome, whilst providing the time during the off-season to prepare for the selection process. After Australia was able to send their first Women’s Team in several cycles to last year’s World Championships in Canada, the seed has now been sown to send subsequent teams, with both previous and new Australian players demonstrating interest in next year’s Championships. Following on from the Men’s success of breaking into the Top 12 ranking in Canada, they will seek to continue this progression, also combining experienced skill with new upcoming talent in their Oceania’s team, and likely also in the 2020 Australian Squad. An exciting development would be the potential for sending an Under 21 Men’s Team to Rome, whilst working on building up Under 21 Women’s numbers towards a similar achievement in the longer term.

Both the National and Oceania Championships demonstrated growth in numbers and skill level within the Australian Canoe Polo community, whist also highlighting areas of improvement required to improve competition results in the future. The two year World’s cycle is now approaching the half-way point, as athletes begin to consider nominations and plan how to best prepare themselves for the selection process. Rome 2020 will also offer the opportunity for a pre-tour to participate in the various European lead in competition, which will again provide excellent international experience, particularly for the younger members of the squad.

The 2021 Oceania Championships will be held in New Zealand and will allow for the improvements learnt to be applied, as Australia aspires to regain their previous competitiveness at the international level.