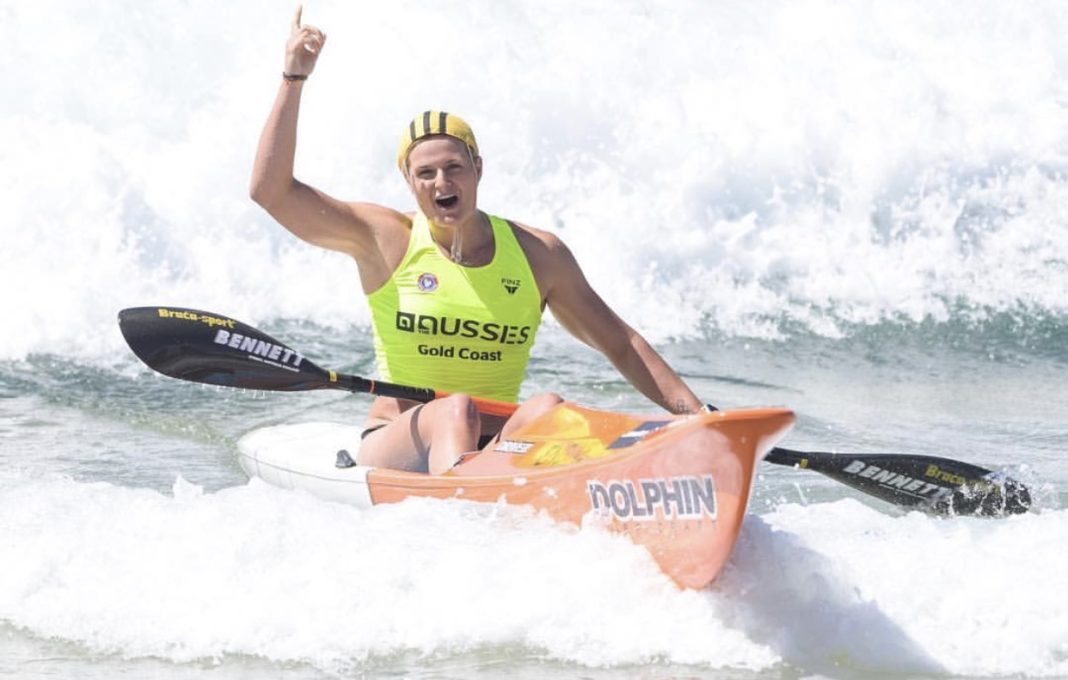 Olympians Riley Fitzsimmons (Avoca Beach, NSW) and Alyssa Bull (Alexandra Headland, QLD) showed why they are some of the best paddlers in the world winning the Australian Male and Female Ski Race Championships at the 2019 Australian Surf Life Saving Championships over the weekend.

The pair were once again the outstanding Olympic kayakers at a surf life saving event, adding the Australian Champion Surf Ski Crown to their World Surf Life Saving Championships success in December, when they also won both the Single Surf Ski events.

“This one (single surf ski) is pretty special, I love doing the team events the most but to be able to get a win in the single is special too,” Bull said about the Open Surf Ski Champion title being extra special. 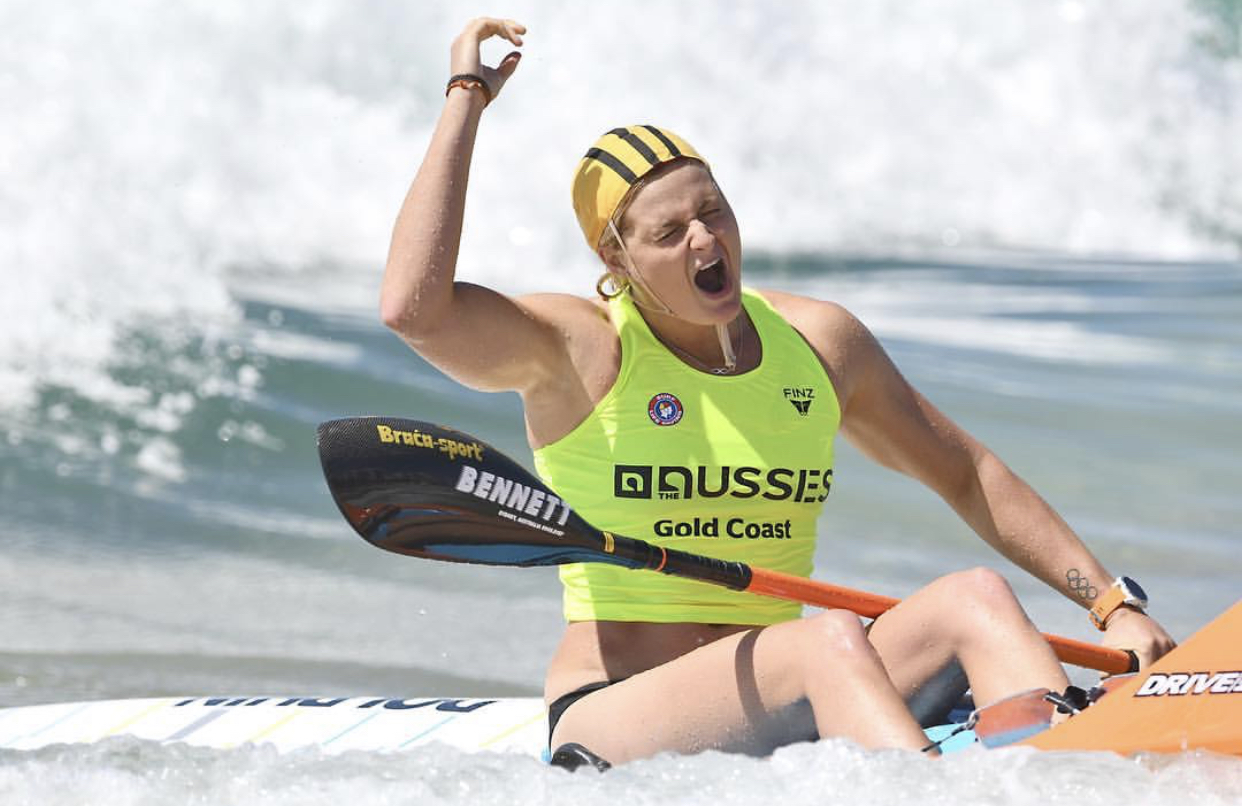 “It was anyone’s game out there and you really have to race your own race and keep your own head in your own boat and make it out as clean as you can. Also back in you’ve got to pick your own chances…couldn’t dial a wave, it was hard work and I had to paddle all the way.”

Bull jumped into the surf ski coming straight out of an intense kayak team boat camp, but her current kayak-fitness and experience from a successful surf ski past, made all the difference as she explained.

“It’s hard to jump in the ski when we are doing a full kayak training program, after gym and paddle sessions. So, we aren’t in and out of the surf on skis at all really until we race at a carnival. When it comes to surf, I am relying on the experience I have had growing up and competing in the surf. But our kayak training is paddling anyway and that can almost transfer directly to paddling the ski.”

Paddle Australia’s female kayakers impressed at the Aussies 2019 with the Open Double Ski podium a kayaker’s affair and with all three medal spots taken out by ‘Olympian-U23 paddler’ winning combinations.

Rio Olympian 2016 Alyssa Bull teamed up with Alexandra Surf Club mate Lucinda Kelly, who was selected on to the U23 team a couple of weeks ago, to take home the win, while London 2012 Olympian Alana Nicholls teamed up with U23 team paddler and fellow Western Australian Shannon Reynolds to win silver.

“It was very cool to have kayakers on the podium for the double ski with our Olympians (Alyce, Alana and me) and U23 team reps (Bri, Shannon and Lu). All the girls are paddling so well and it’s cool to see it come through in the surf too,” Bull said.

On Saturday, Alexandra Headland also won the Open Female Ski Relay, the team bolstered by Alyssa Bull who was powerful off the start line and dominated the first leg. U23 paddler Lucinda Kelly maintained the lead with ease, gunning for home just as second and third where starting to come around the cans. Tiarne Raymond then secured the gold for her Alexandra Headland team at the 2019 Aussies and the second gold for Ali and Lucinda, after the pair already won the Open Doubles Ski Friday afternoon. 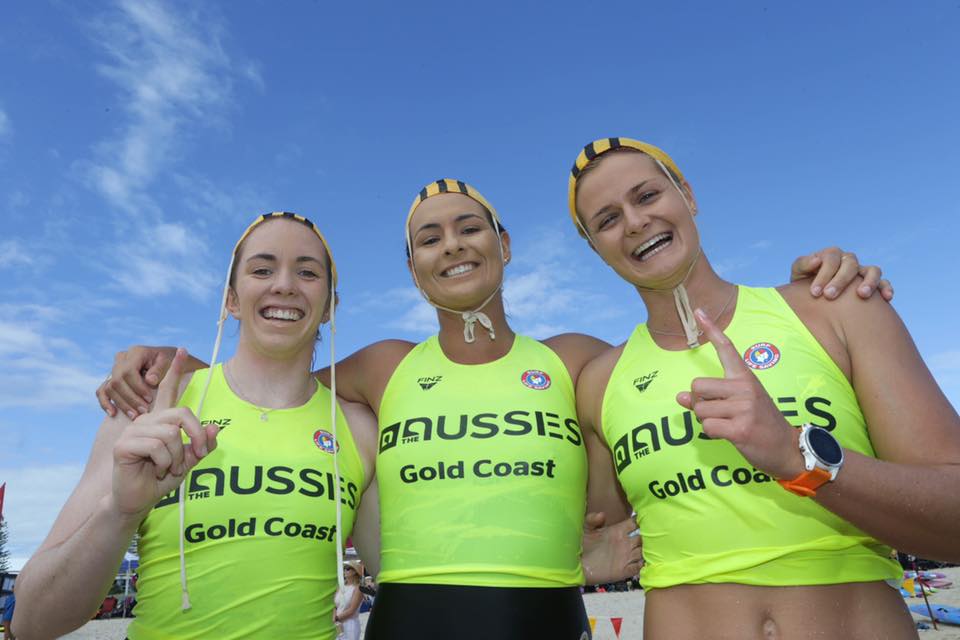 While there were plenty of reasons to celebrate, all kayakers will head straight back into canoe sprint training next with the 2019 international canoe sprint season only just over a month away.

“We are back in business this week, full kayak mode. We trained early in the week and a bit during Aussies but it was much less so we could enjoy racing but now I’m keen to get back to it for a solid lead in to world cups.”

In the men’s open ski events, smart racing from Paddle Australia’s Rio 2016 Olympian Riley Fitzsimmons proved the difference when he took the conservative option on the way back to the beach. “I didn’t think I was going to hold that last (wave), it was pretty big. I chose the safe option and it worked out. I got so lucky to get a wave from around the last can, I didn’t know if I was going to get it all the way to the beach.”

The 22-year old said he was honoured and speechless to join a rare group of Australian champions. 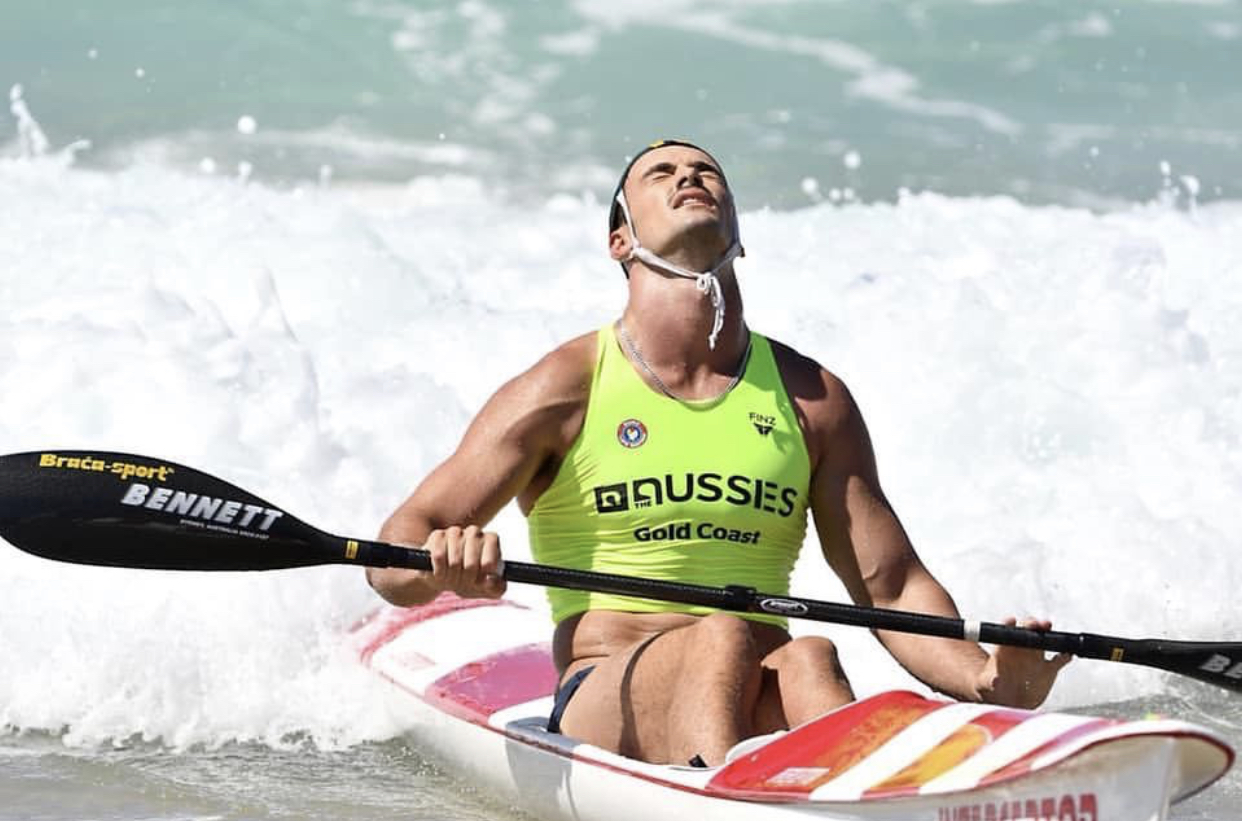 “I’ve looked up to so many guys who have won this title before and to have my name up there next to the likes of Lachie (Tame), Peter Scott, Ray Stewart… they’re real world class paddlers, it’s a dream come true.”

And commenting on the women’s race and the World-Australian Championships double he added, “It was awesome to watch Aly take out the open female ski, we both won the single ski title at the world champs so it would be nice if it keeps becoming a recurring result.”

It was Fitzsimmons second gold at the Aussies after he partnered with Peter Mitchell and fellow Olympian Lachlan Tame (NSW) to also win gold in the Single Ski Relay and enjoying the little break from kayaking ahead of the Olympic qualification season. 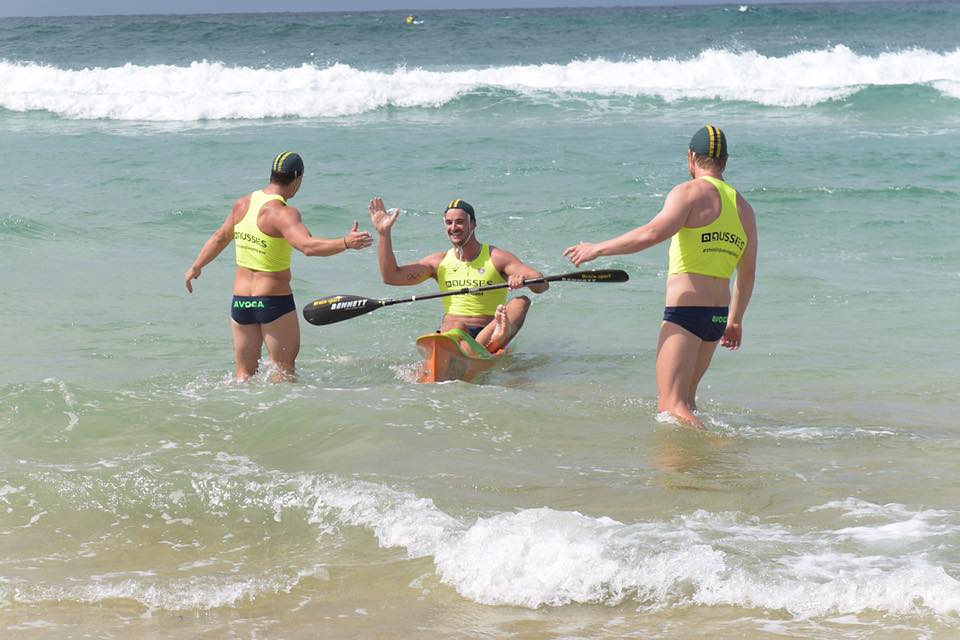 “There were a lot of us from the Australian Paddle Team competing this week and it was nice to have a bit of a break from kayaking and get into some surf. It’s really nice that the kayak and surf ski are really similar, which let’s us transfer from one craft to the other pretty easily. Plus a lot of our technique work in the kayak helps me in the ski.”

And about the plans ahead Fitzsimmons added, “It’s straight back into World Cup prep this week and it’s not too long until we head overseas now, so we want to take advantage of the time we have at home.”

In the men’s double ski, Paddle Australia’s national team ocean racers and Northcliffe’s Cory Hill and Mackenzie Hynard took out a comfortable win in the Open Male Double Ski in an event that did not go as expected. 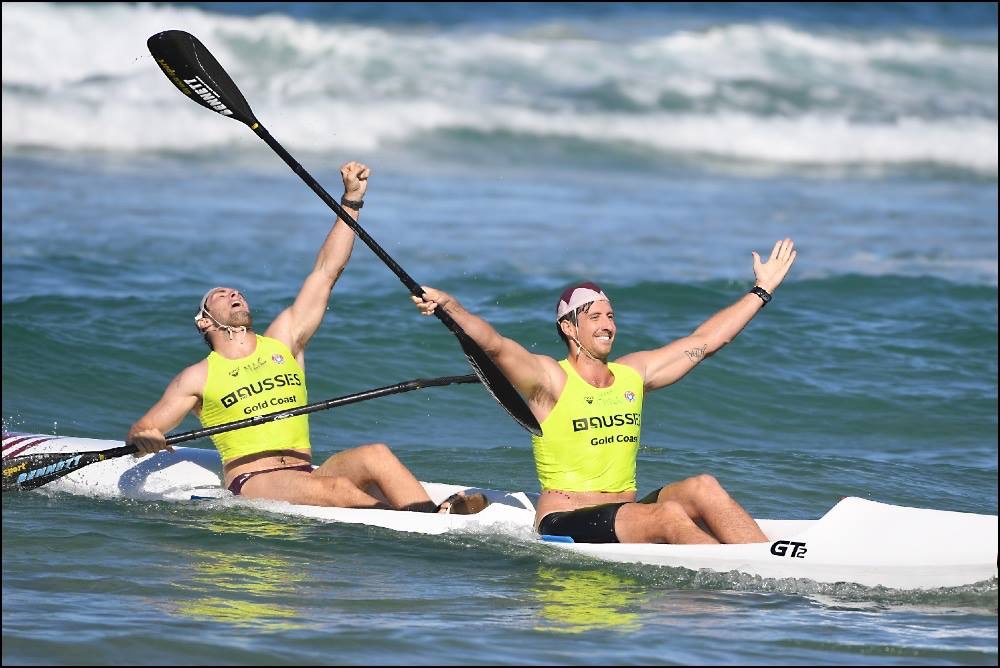 “We were the only ones on that last wave,” Hill explained. “I couldn’t believe it, I thought we were all going to be pushing over and having a sprint finish so to get to enjoy that last 50 metres was unreal.”

Canoe sprint national team paddlers and youngsters on the team Tom Green and Jackson Collins finished fourth in the event, while the combination of Riley Fitzsimmons and Lachlan Tame finished eighth. 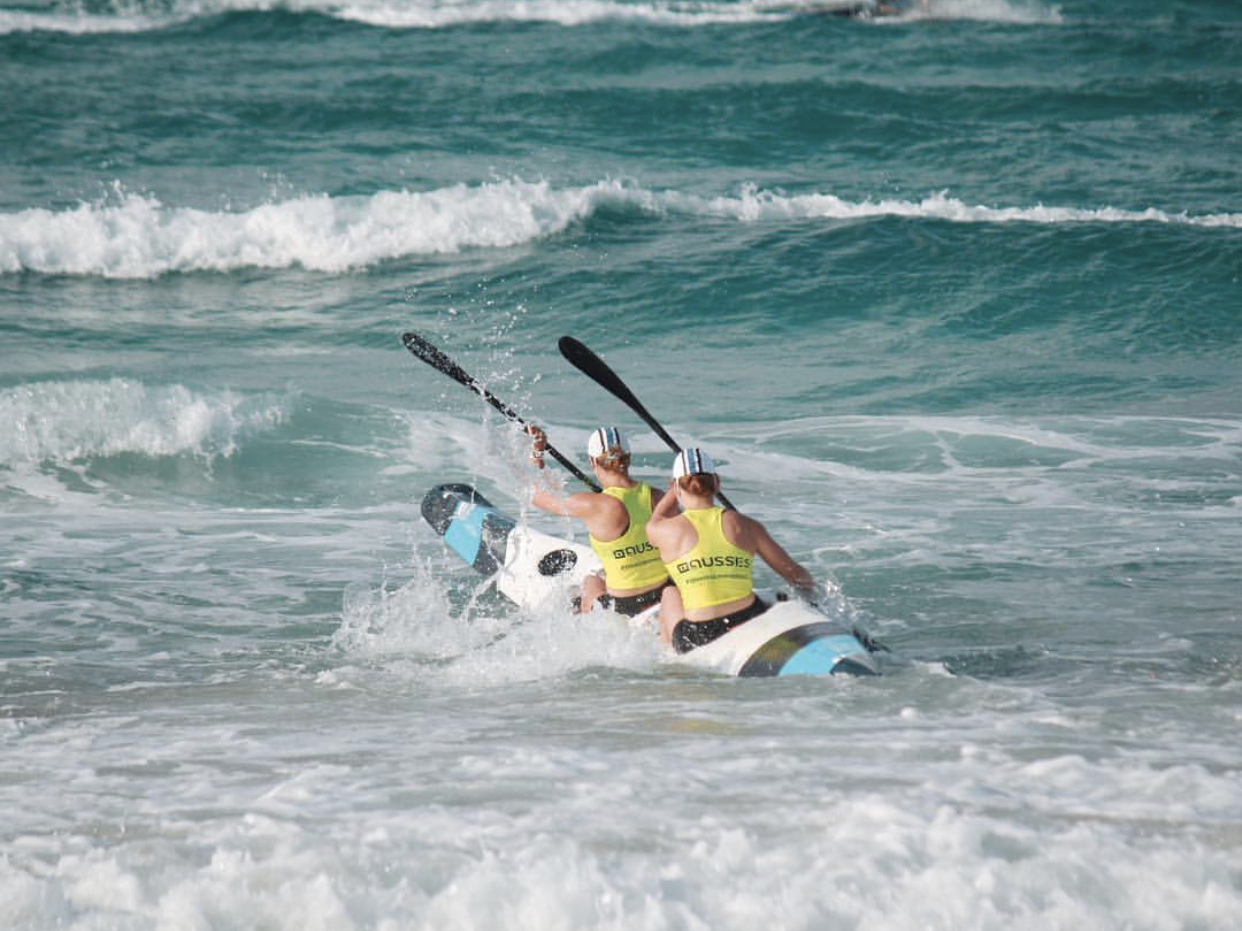