Rio Olympian Alyce Burnett (QLD) made it a golden double after winning both the women’s K1 500 as well as the 200 on the second day of the 2019 Paddle Australia Canoe Sprint National Championships at Champion Lakes in Perth (Thursday, 7 March 2019). Riley Fitzsimmons (NSW) and Jordan Wood (QLD) also had a strong day taking home the win in the men’s K2 1000, while Rio Olympic bronze medallist Lachlan Tame (NSW) won the men’s K1 200 in a dead heat with South Australian Matt Goble.

“I guess coming into nationals this year I really wanted to try and get that double. We’ve got a really good group of girls at the moment so the pressure was definitely on. The 500, I felt pretty good throughout the race. There are still a few things to improve on, but Bully and I went both 1:49 which is really exciting in pretty flat conditions as well,” Burnett said, who has won every 500 race this season. 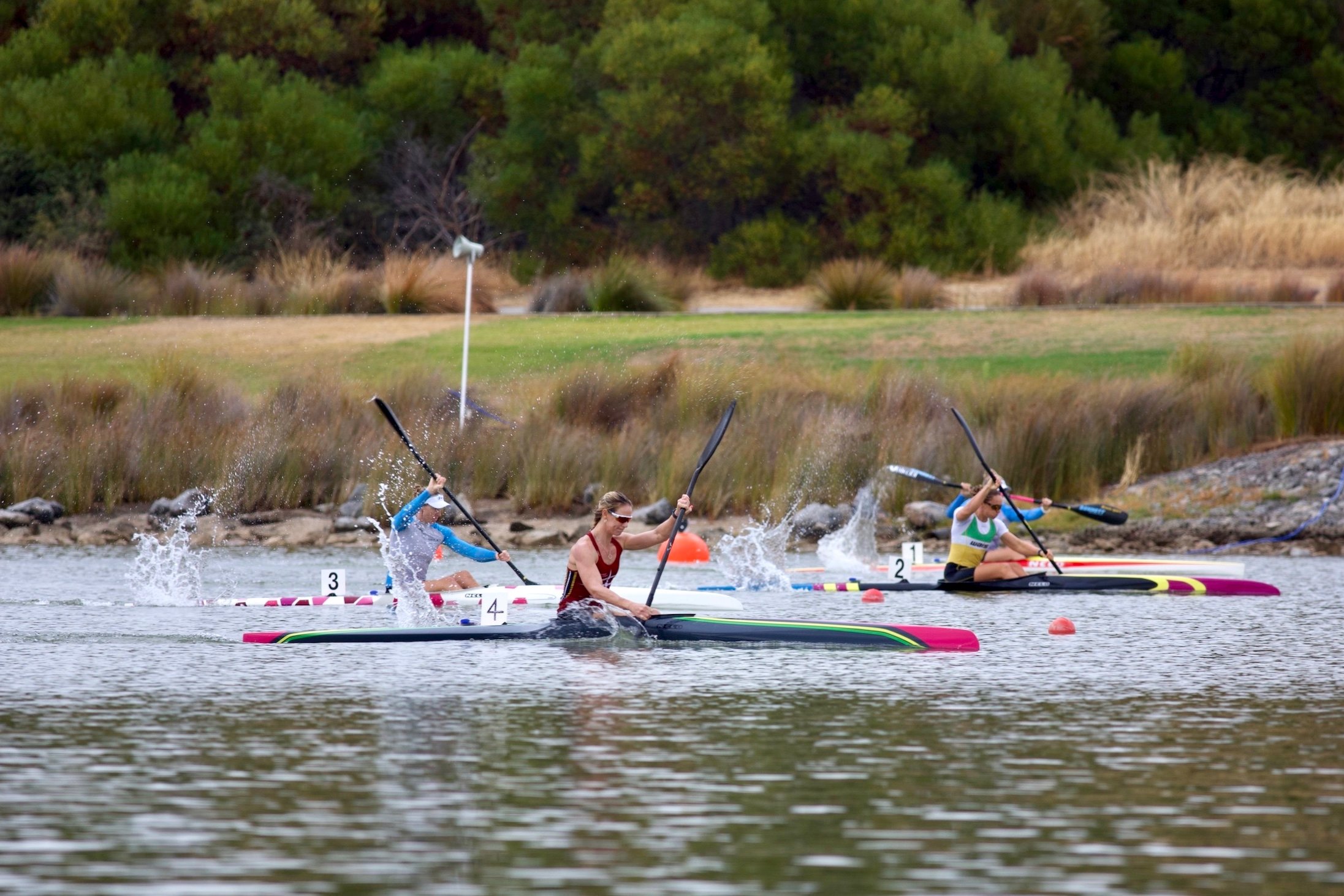 “It was a tight turn for the 200, but we all got out there again and it was a really tight race. I left it right to the end to come over Jo (Brigden-Jones), who had an epic start, she is a really good 200 paddler, and I guess I kept everyone on their toes and I ended up winning by .11 which is nothing but I’m definitely happy to take the double,” Burnett added laughing.

Alyce Burnett and Alyssa Bull went on to also win their heat in the K2 with finals scheduled for Friday morning.

“The K1 selection races are now over and by winning those races I am on the team, but we’ll see what happens with the K2s. Bully (Alyssa Bull) and I have had a few more chances to jump into the K2 since GP2 in February, which is really good and it’s feeling great. K2 for her and I is like going home and we really enjoy it,” Burnett said.

Jaime Roberts and Jo Brigden-Jones won the second heat to also progress straight through to the final. They will be joined in the final by Ella Beere (NSW) and Shannon Reynolds (WA), who qualified fastest in 1:45.02 in the semi-final followed by Cat McArthur (SA) and Brianna Massie (QLD), Keily Dober and Freya Alston (NSW), Joanna Charles and Lucinda Kelly (QLD), Morgan Brodhurst-Hill and Georgie Tonkin (QLD/VIC) as well as Paige Wood and Selma Alibegovic (WA).

“It hasn’t really sunken in yet and I’m just trying to do the best I can. At GP2 I made the open women’s B final and I was just stoked with that but to make the A final that was just basically a dream come true. I didn’t really have any kind of position I wanted to come, I just wanted to see how I go, get my race plan sorted out and I’m really happy with how I raced. It’s a different kind of playing field compared to the under 18s, so it’s a big learning curve. But it’s the under 18s and making the Junior Worlds I’m aiming for and the Open was just a chance to see how I could go against the big girls,” Kailey Harlen said after the race. 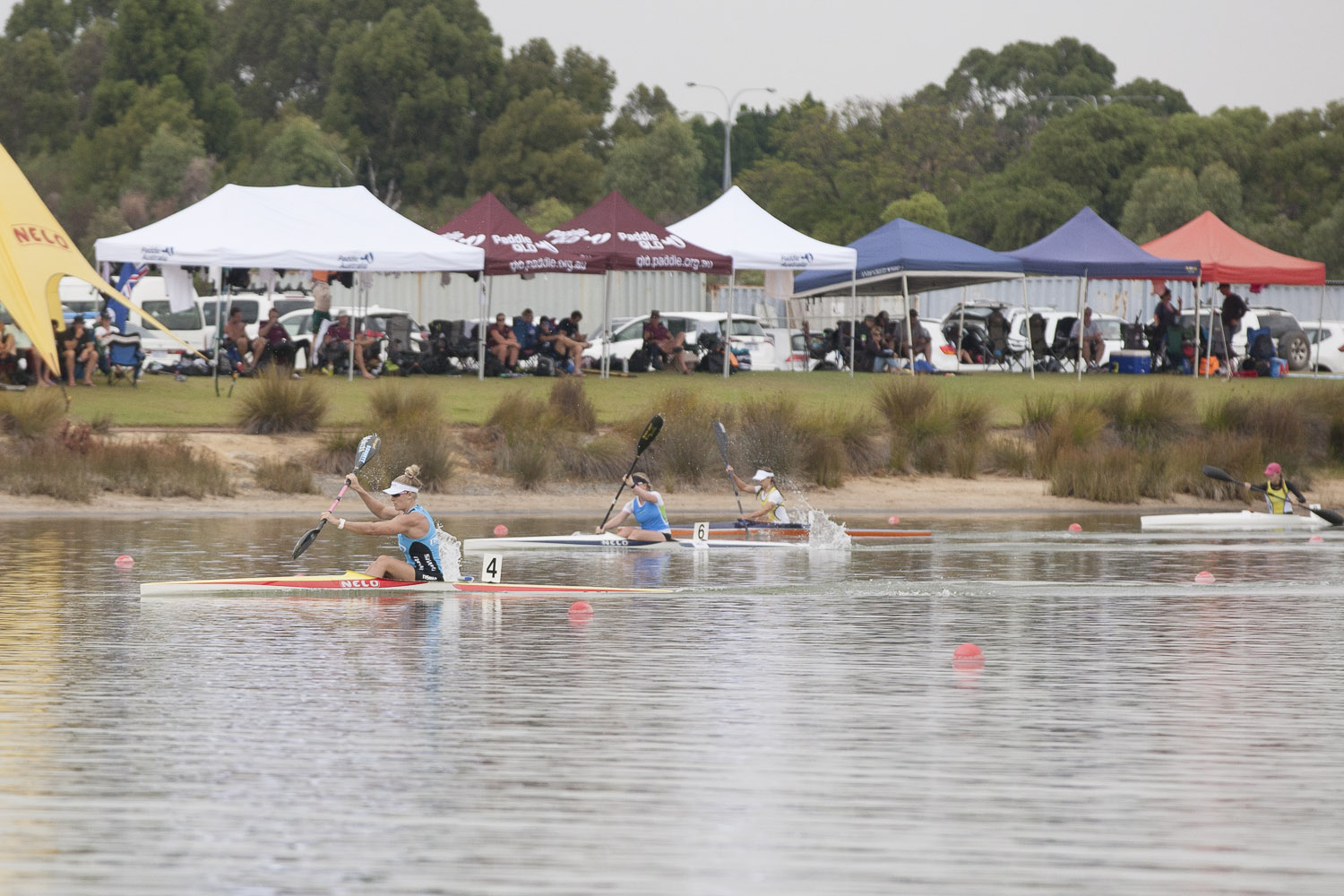 Harlen will be contesting the under 18 K1 500 and 200 and K4s next and won the K1 500 heat over six seconds ahead of second placed Yasemin Ray (WA) and Youth Olympics paddler Jenaya Massie (QLD) in third.

In the men’s Olympic boat classes, Rio Olympians Riley Fitzsimmons and Jordan Wood shone in a time of 3:09.99 when they took home the win 1.78 seconds ahead of 2018 U23 World Champions Joel McKitterick (QLD) and Tom Green (QLD) in 3:11.77, despite a late start. Queensland’s U23 paddlers Jackson Collins (QLD) and Jean van der Westhuyzen (QLD) finished third in a time of 3:12.12.

“We didn’t have the best start and missed a few strokes. I thought I heard a different siren and thought it was a false start. But we recovered pretty well after that and stuck to our race plan. We had a lot of confidence in the plan we’ve been executing in training and it came second nature to us. We executed the race exactly how we wanted to, minus the first 100,” Jordan Wood explained.

“I’m pretty sure this means that we will get to race the K2 at worlds but nothing is set in concrete, crews can change, especially regarding the K4, but I would like to race it 100% at worlds because I got a lot of faith in what we’ve done and the road we are one and hopefully come Tokyo,” Wood added in regards to the upcoming team selections. 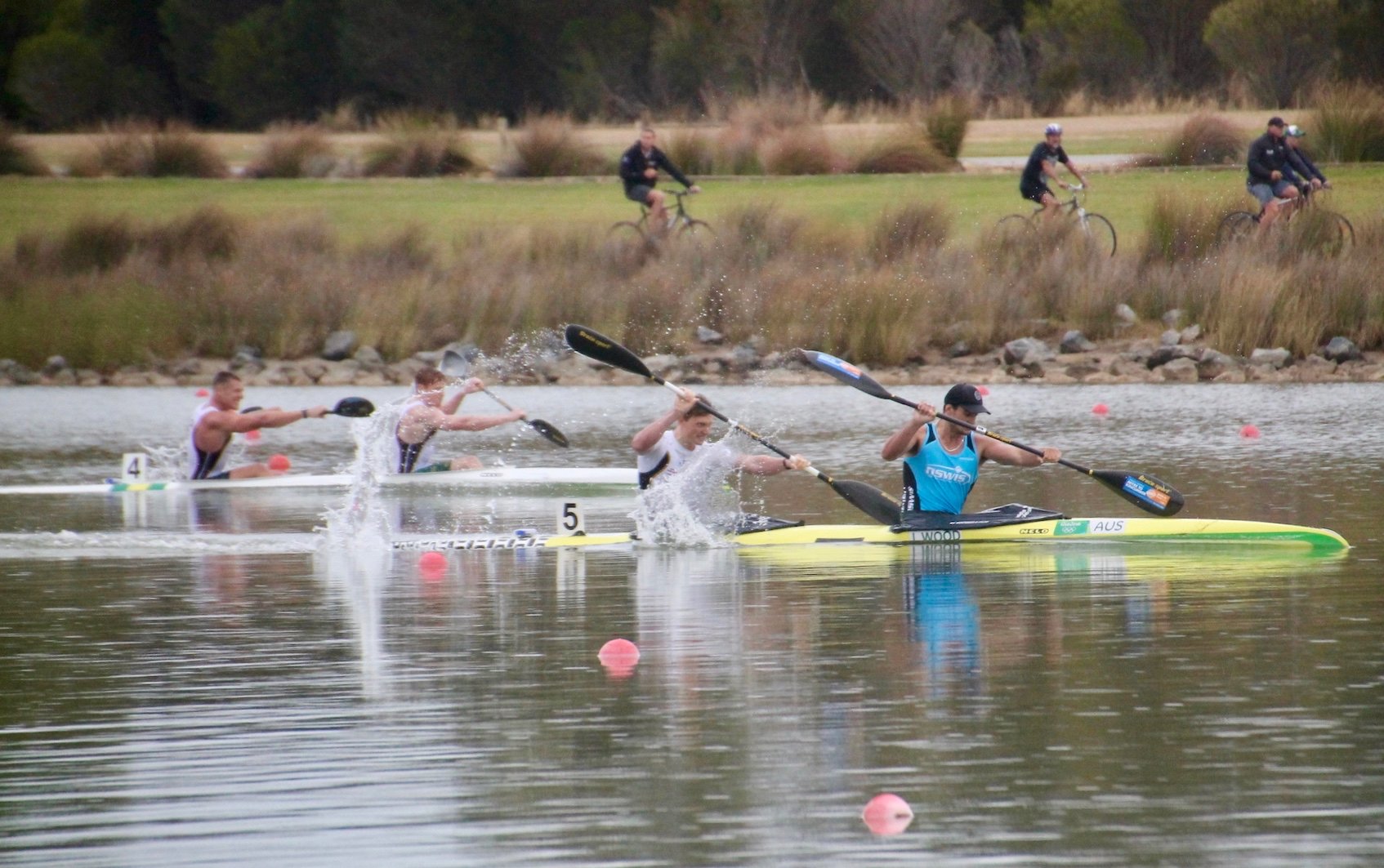 It was one of the first races back together for the pair, who finished fourth in the event at the 2018 ICF Canoe Sprint World Championships last August and they were facing a stellar national field.

“It’s been amazing this year. Woody and I only managed to get one regatta done together and we’ve been experiencing the depth of Australia kayaking getting more and more quality crews together and that final displayed that. We were pushed all the way to the end,” Riley Fitzsimmons said about the level of competition.

“This place means we will get to go back overseas again which is a fabulous achievement for us again. We were able to race the K2 1000 at World Champs last year and we got a fourth place there and we are really wanting to improve on that result and put ourselves on the podium and obviously qualify some spots for Australia for the Olympics so there are exciting times ahead.”

Exciting times are also ahead in the Paralympic classes with 19-year old Rio Paralympian Dylan Littlehales putting in a PB and breaking the .40 seconds barrier in the Para Canoe MK1 200.

“Today I managed to get below the 40 seconds mark and managed to get a 39.7 which is what I’ve been working towards for a long time now and with the help of Jake and Dane at NSWIS we’ve finally got there and now I just have to get down to 38,” Littlehales said after taking out the national title in the KL3 200.

New-comer to para canoeing Mark Daniels (WA) also put in a PB, placing him on to the podium in third place and with prospects for team selections that will be announced next week.

“I got a three seconds PB in the final today and came in at 48 sec. My goal was to be at 50 seconds at nationals and I couldn’t ask for a better result,” Daniels said. 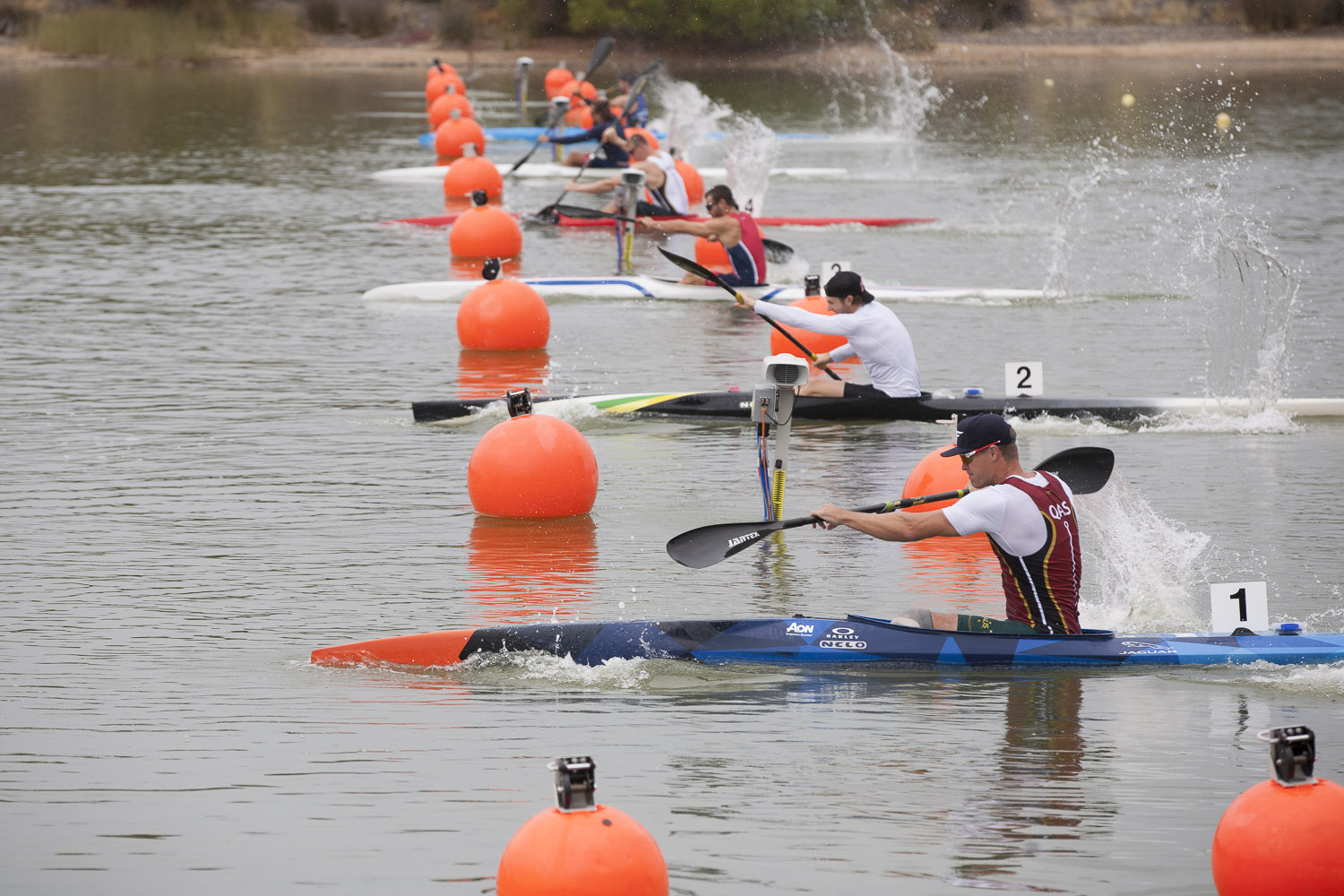 “I’ve been so happy with my results this week and it’s all the hard work we’ve done over winter and it’s just come up really well,” Amanda Reynolds said.

“My coach Guy (Power) and I put in a lot of work of getting our technique right and getting headspace back on the water and the boat is running beautifully so I couldn’t be happier.” 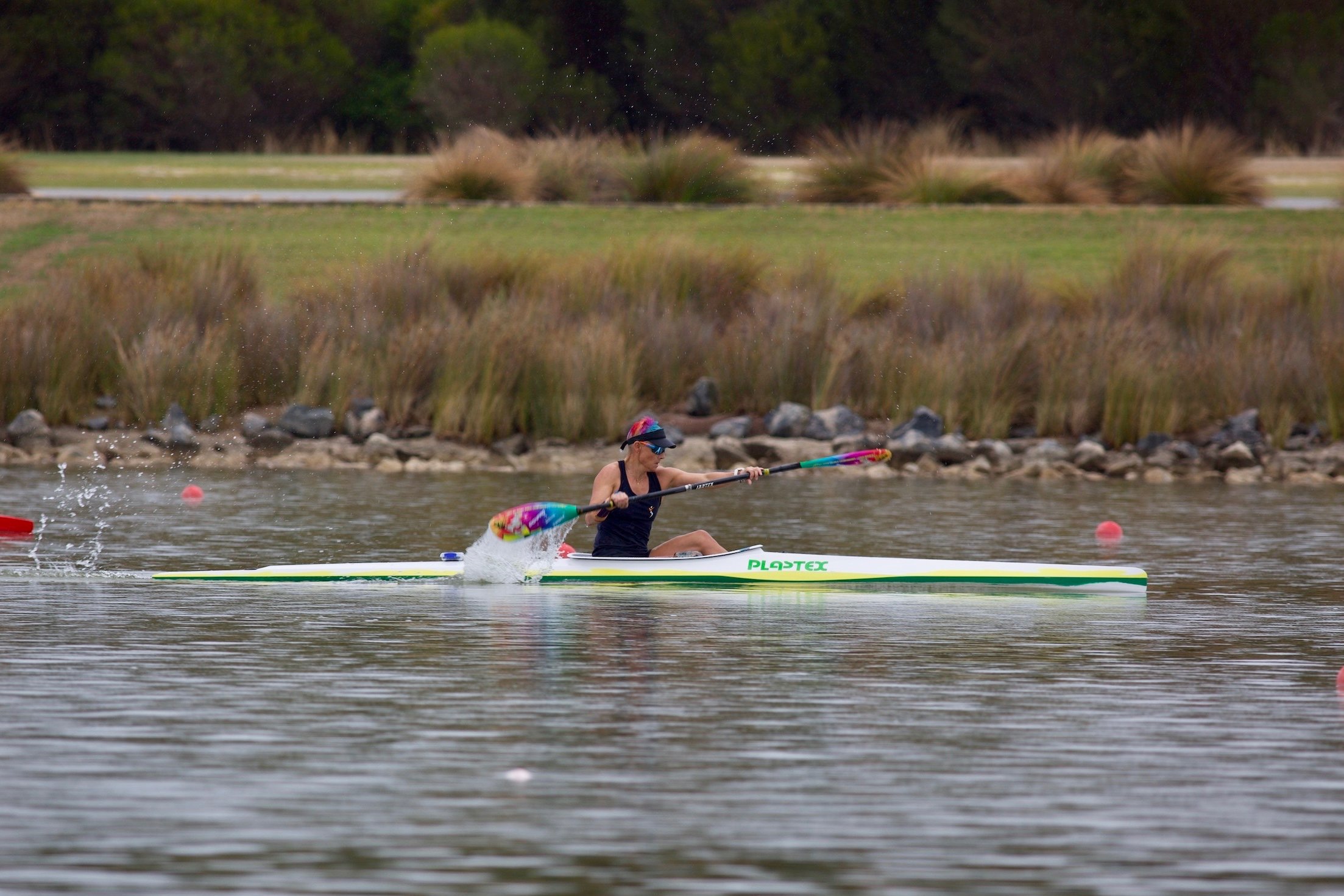 Happy faces were also seen in many of the junior races with Daniel Kucharski(SA) taking out his first individual national gold in the men’s K1 18 1000. He had to share it though with Tinus Koekemoer(NSW) in a dead heat of 3:47.96. South Australian Jesse Kneebone-Ellisfinished third, only 0.02 behind for an almost triple dead-heat.

“It was a ridiculous race. It was just so intense and all of the boys were going right forward from the beginning. After the finish line I was looking at the coaches trying to figure out what happened. Overall, I was pretty happy knowing that I had a good place. I’m pretty sure that both of us will go through for selections and going to compete at the World Championships as well as Asia Pacific and I’m fully stoked about that,” a thrilled Tinus Koekemoer said. 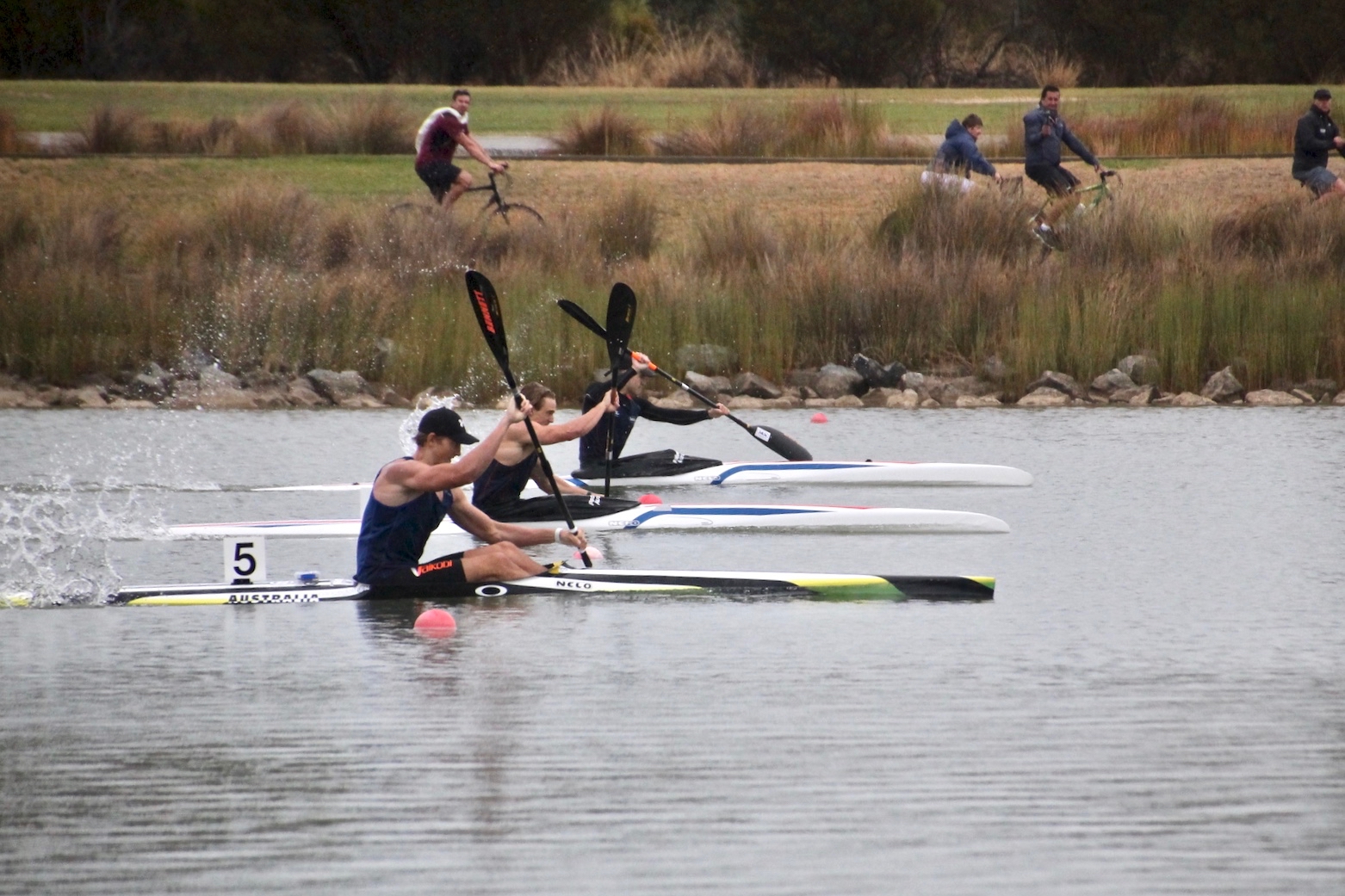 “I did look across just after the line and I did notice that it was very close between us three guys. But I was pretty confident in how I raced, so I wasn’t doubting my placing and was pretty happy with that,” Dan Kucharski said.

Kucharski also won Wednesday’s K2 200 and is aiming to making it a trifecta winning the upcoming K2 500 and 1000 events with club mate Jess Kneebone-Ellis.

“The goal for the K2s is to try and take out all of them and hopefully get the trifecta and get all golds and just to secure the spot as the K2 team for worlds, that’s the end goal from nationals really.”

“We were really happy with our K2 race. We were a bit new to the seats because we swapped around in the front and back but it was a really good race and we were happy with that. I’m only first year under 16 so it’s really good to be up there with all the competition. I’m really excited to go away and race other countries,” Demi Bates said after securing selection to Paddle Australia’s canoe sprint pathway program that will take the pair to compete at the Asia Pacific Cup in New Zealand in May.

“It’s really exciting. If we make it, this will be my second Australian team and Demi’s first and it will be a good experience to get a feel on how the international competitions are,” Chaise Richardson said.

Canoe Sprint National Championships racing continues Friday, 8 March 2019.
228 athletes are contesting the 297 events across all age groups from as young as under 10 years old to over 65 years of age over the five-day regatta. 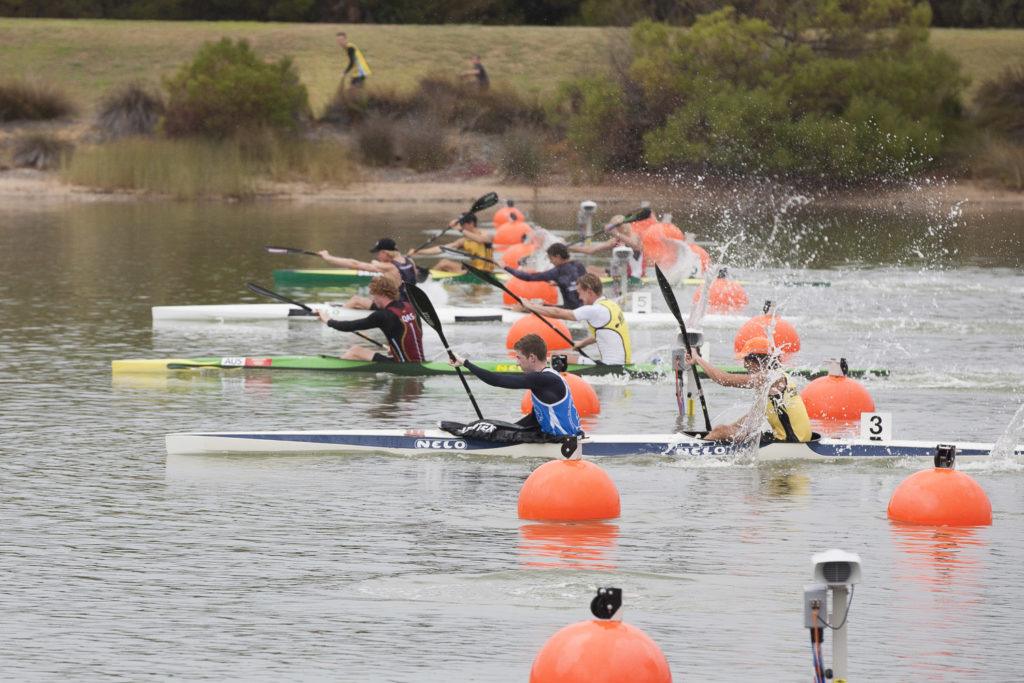