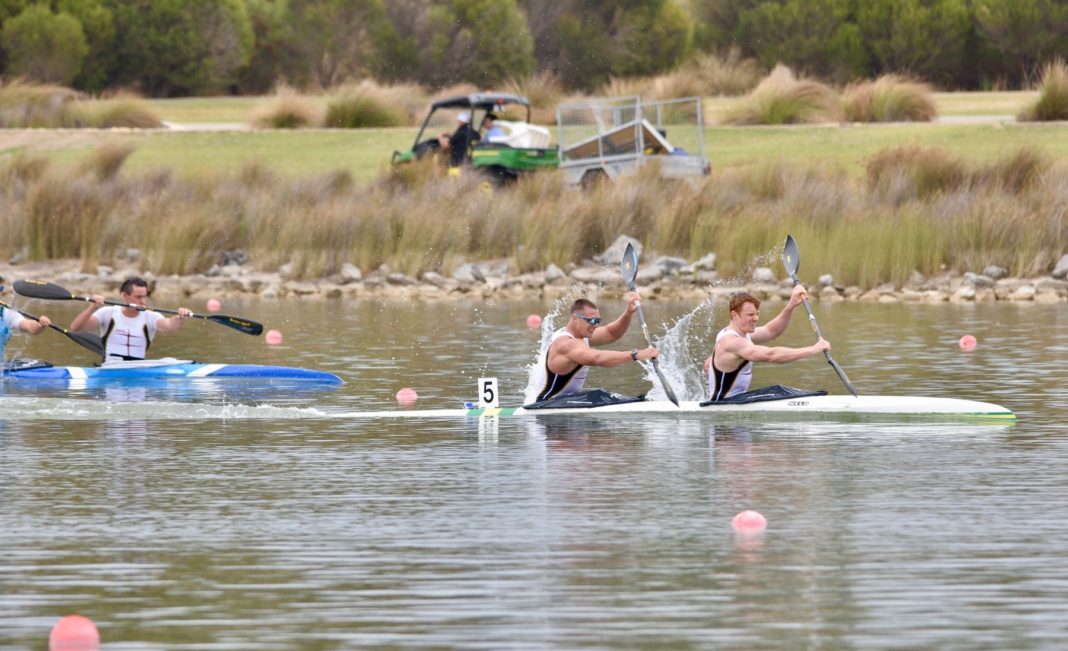 The 2019 Paddle Australia Canoe Sprint National Championships kicked-off at Champion Lakes in Perth today (Wednesday, 6 March 2019) with a full day of racing across all age groups and distances.

The national championships double up as the key selection event for Australia’s 2019 national canoe sprint teams and after gaining pre-selection to the U23 National Team following their win in the U23 K2 1000 event at Grand Prix 2 in Sydney in February, the two 20-year old’s, who only recently started paddling together, have now set their eyes on making the Senior Team as well.

“GP2 was our first regatta as a K2. We only had done training together before then and that was our first race as a pair and it was really good to go there and get pre-selected for the U23 team. And hopefully we’ll have a really good regatta here and see where it takes us,” Jackson Collins said.

“We haven’t been paddling together for too long and to go out in Sydney and have a good race was a good sign and I’m looking forward to this weekend. The ultimate goal is to be on the senior team. We’re both really stoked to be on the U23 team, but ultimately, we both would like to be at the highest level and make that senior team and hopefully we can have a good performance here,” Jean van der Westhuizen added about their future goals. 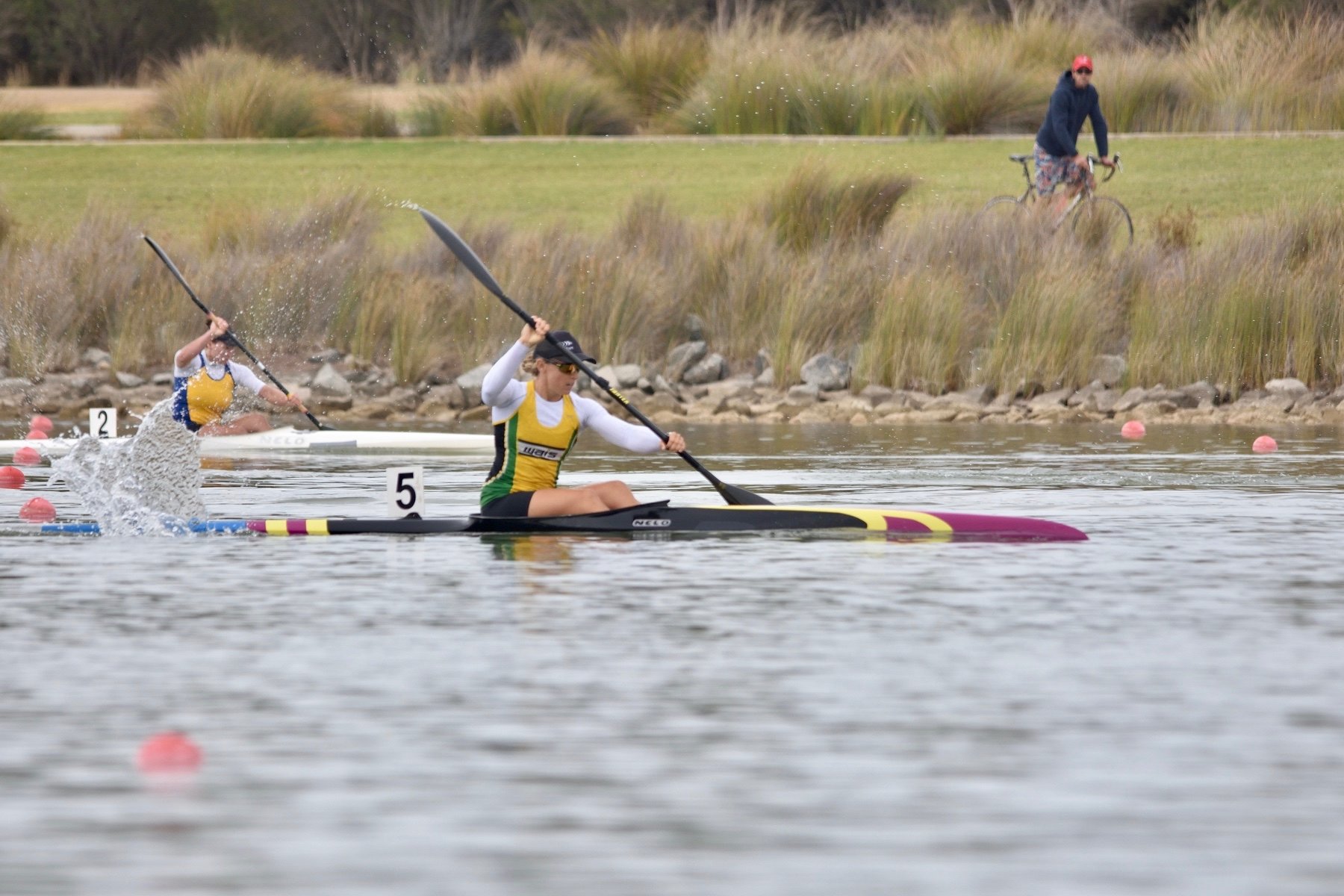 In the women’s K1 500, 2018 national team paddlers Alyce Burnett (QLD), Alyssa Bull (QLD), Jaime Roberts (WA), Jo Brigden-Jones (NSW) and Cat McArthur (SA) showed their continued depth by taking out the top two spots across three semi-finals and progressing through to Thursday’s final where they will be joined by U23 paddler Ella Beere (NSW), who finished second behind Burnett as well as Western Australian Shannon Reynolds. U18 paddler Kailey Harlen (NSW) also impressed making the final as a junior.

The women’s C1 200 was won by former national team paddler Bernadette Wallace (SA), 0.76 seconds ahead of her C2 partner and 2018 U23 and Senior national team paddler Josephine Bulmer (SA). This win highlights Bernadette Wallace progress, who only returned to national competition at the end of last year after switching from kayak to canoe and has only spent a few months in the boat class that will be new on the program for Tokyo 2020. 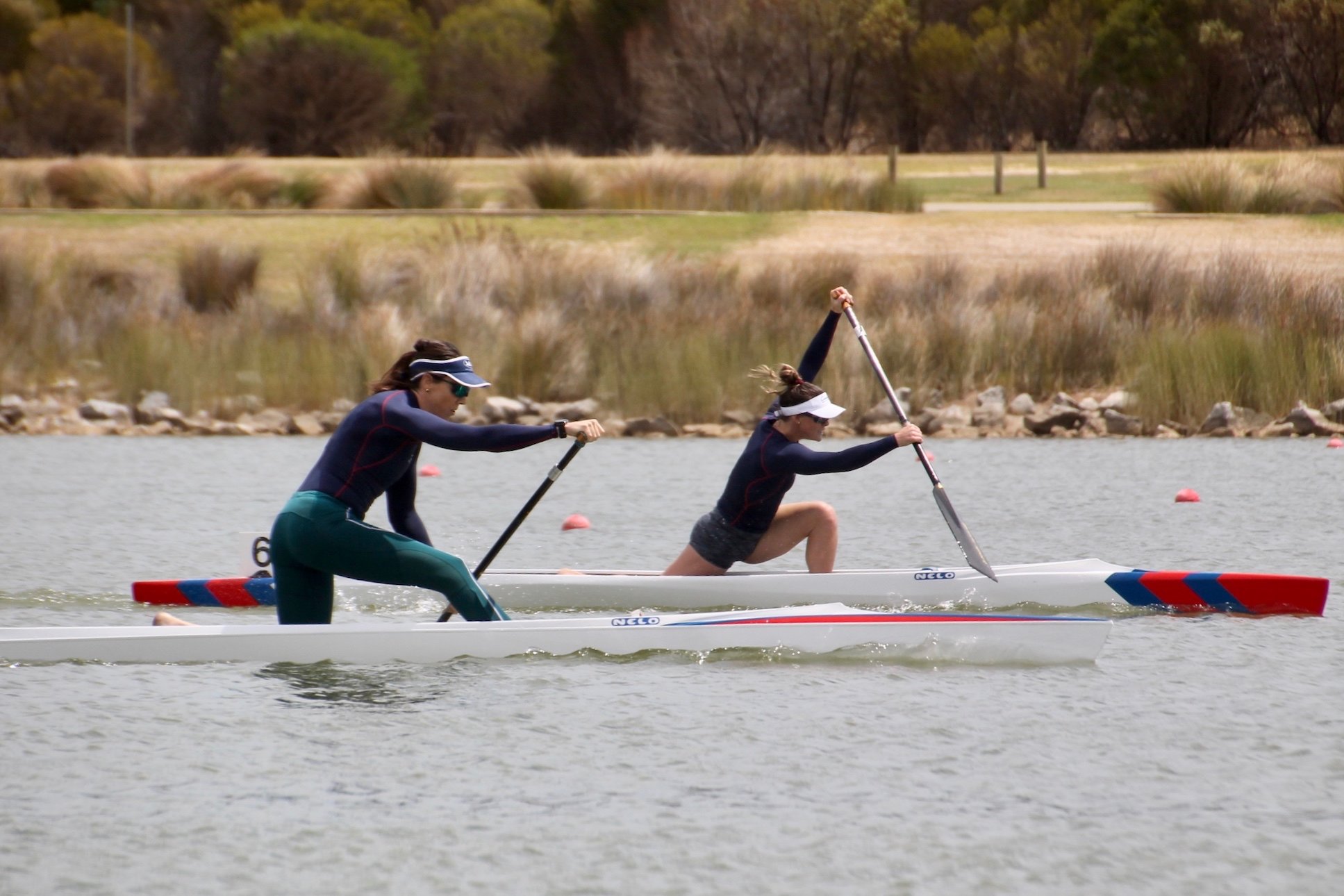 In the Paralympic classes, Paralympic champion and eight-time World Champion Curtis McGrath (QLD) got a run for his money from team mate Dylan Littlehales (NSW), who beat him in the Para Canoe MK1 200 seeding race by just 0.24 seconds. While the pair is racing different classification events on the international level, they make the most of pushing each other on the national circuit.

“It was a great race for both of us. Not the nicest start to nationals with a cross-head wind but everyone has the same conditions and we both paddled well and we’ll have the finals tomorrow. Curtis started paddling a year before me, but since I started, we’ve always been racing each other and it’s at the stage now where it’s really close and it’s great to have a little rivalry on the Australian team. That pushes me and it pushes him and everybody gets better,” the 19-year old said about their friendly rivalry.

And about selections Littlehales added, “for selections, you basically have to finish first at nationals in the KL3, 2 or 1. Hopefully, the way it’s looking is that Curtis and I will have the KL2 and KL3 spots and AJ (Amanda Reynolds) and Susan (Seipel) should have the women’s spots and if we have any KL1 paddlers that are fast enough, hopefully they can come along too.” Paracanoe racing continues on Thursday with the first set of finals. 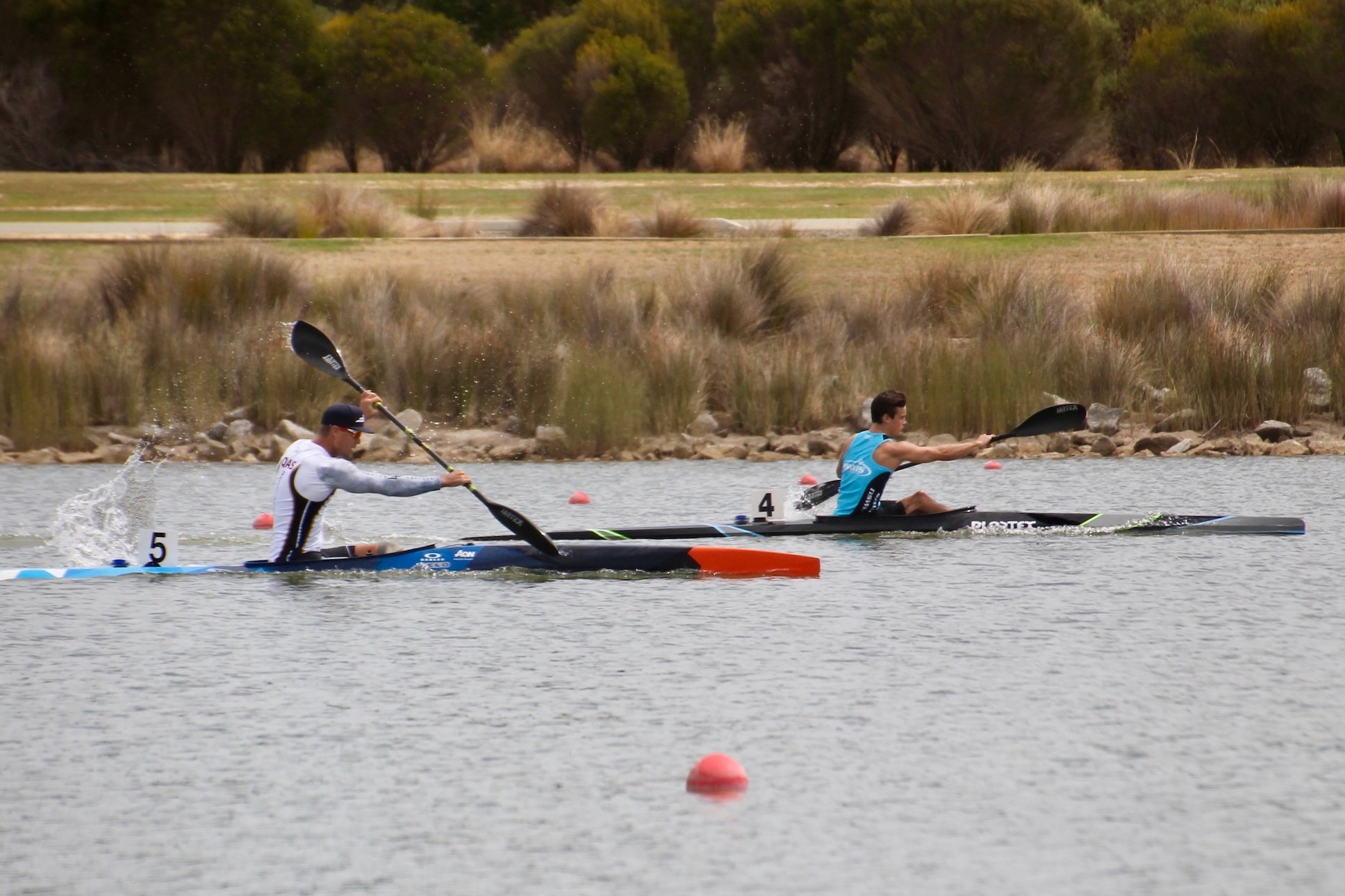 In the junior classes, the first day of nationals also saw some strong performances by some of the youngest paddlers on the scene with under 16 paddlers Ashby Allen (NSW) and Daniel Hardwick (QLD) taking home the win in the men’s K2 1000 16.

“We were feeling pretty good before the race and when the gun went, we did our first twenty doubles and we kept on going and ended up winning. We were actually a bit surprised, but we smashed it. This is my first season in kayaking and I won, so that was great and I just wanted to make a squad this year” Ashby Allen said, who is racing his first season in the kayak after transferring from surf ski last year.

“I’ve been doing nationals for a bit and the goal was to go up the next step. It’s pretty cool to have achieved that and to hopefully get on one of the international squads”, Danie Hardwick added.

In the women’s K2 500 18, South Australians Ashlee Schoene and Caitlin Webber won ahead of the combination of Charli Smyth (SA) and Yasemin Ray (WA) with both boats looking to secure Junior Team selection.

“We came out and had a good start and then we could see everyone catching up on us. We then started to go past our coaches and parents and heard them screaming so we just dug deep and tried to not get flustered with everything that was going on out there, remain calm and follow what we’ve done for the past two years together and it worked,” Ashlee Schoene described the race.

“Hopefully, most likely we’ll get on to the Junior team with this race which is really exciting,” Caitlin Webber added. 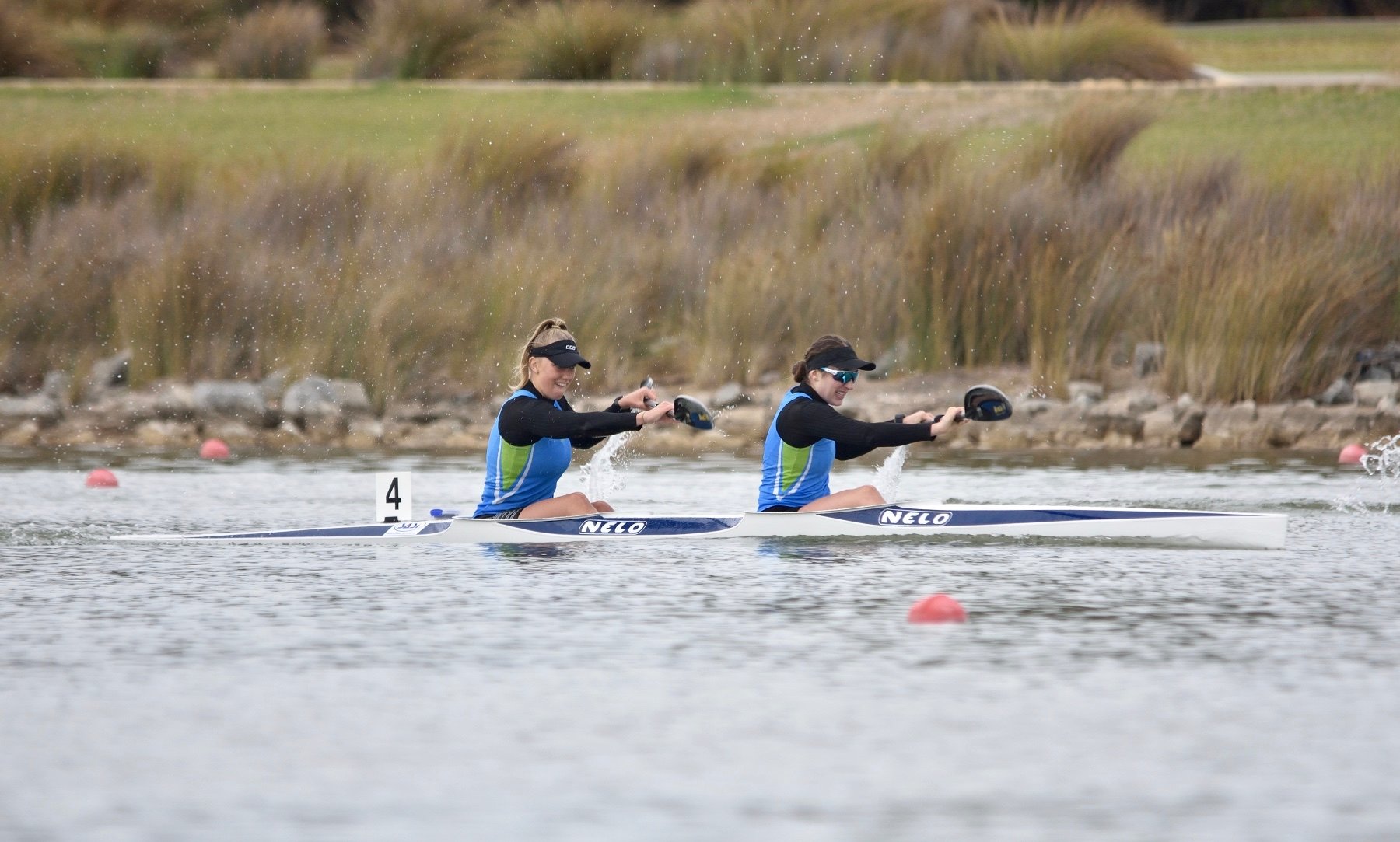 In other under 18 racing, fellow South Australians Jesse Kneebone-Ellis and Daniel Kucharski took home the win in the men’s K2 200 18, while the women’s K2 200 18 was won by Alicia Fay (QLD) and Harriette Alexis (WA).

With the national championships including all age groups, one of the youngest competitors from Sydney’s Northern Beaches, Carlito Vesely, made waves when he won the MK1 1000 12 as a nine-year old.

“I was pacing myself and on the last 200 I tried to go my hardest. They were hard competitors and stayed with me for the first part but then I went harder which made me get first place. My plan is to win every single race at nationals and get as many medals as I can,” Carlito Vesely said confidently.

In the under 14 age group, NSW crew of Michael Dunbar, Lachlan Schooley, Ziko Vesely, Jacob Wilson won the MK4 1000 14, while the women’s K2 1000 14 was won by Western Australians Femke Negus and Olivia Campbell.

16 months out from the Tokyo 2020 Olympic and Paralympic Games the National Championships have attracted over 220 athletes with the event also the final domestic national team selection event for both Olympic and Paralympic class paddlers to contest the upcoming international ICF Canoe Sprint and Paracanoe World Cup season.

The ultimate goal for Australia’s sprint paddlers this season will be securing of Olympic and Paralympic quota places at the international season’s highlight, the 2019 ICF Canoe Sprint and Paracanoe World Championships in Szeged, Hungary at the end of August.

All of Paddle Australia’s 2018 Olympic and Paralympic classes national team athletes are contesting at the national championships, aiming to secure their 2019 national team spots.

The National Championships is also the final selection event for the spots on this year’s Junior and Under 23 Teams.

228 athletes are contesting the 297 events across all age groups from as young as under 10 years old to over 65 years of age over the five-day regatta.

Racing at Champion Lakes Regatta Centre in Perth runs from Wednesday, 6 March local time and will conclude at 1:15 p.m. on Sunday, 10 March 2019.