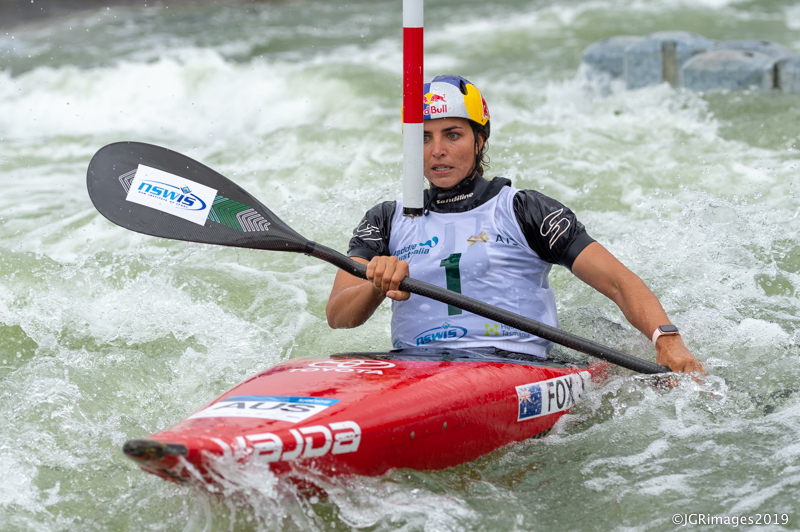 Fellow Aussies Kate Eckhardt (TAS) took out the women’s K1 U23 Oceania title, while Western Australian fellow U23 paddler Steven Lowther impressed in the men’s C1 finishing as the top ranked Australian in 15th and taking out both the U23 and Senior Oceania titles.

In the Oceania Open Championships results, Germany’s current World Champion Franz Anton claimed gold in the men’s C1 in a time of 108.11, followed by Slovakia’s Rio 2016 Olympic silver medallist Matej Benus in second at +0.17 and Marko Mirgorodsky (SVK) in third with +1.15.

After his winning run, Anton said he was happy with his performance, but now has his sights set on Tokyo 2020.

“It was a good run, but I did have some problems at the last upstream gate,” he said about the long course that contained eight upstream gates. “My target time was 106 and I missed it by two seconds, but for the end of the training camp here it’s a good finish.

“It’s only the second race of the year and it’s still early in the season but it’s the first step and it’s good to see how the others came through the winter. It gives you a good feeling if you win or if you have a successful run here and it’s been good.

“The goal for the season is to qualify for the Olympic Games and we’ll have the Olympic selection this year at the World Cups and the World Championships, so this is my target for the year.”

Unfortunately for the Aussies, no male competitors proceeded to the final, but U23’s Steven Lowther put in a strong semi-final performance to finish in 15th and as the top ranked Australian male competitor ahead of Tasmania’s Dan Watkins in 19th and Tristan Carter (VIC) in 20th. Brodie Crawford (WA) finished the semi in 21st, while Ian Borrows (NSW) placed 25th.

“I’m really pleased with my result today, I delivered what I wanted to, had a few spots I want to improve on, but big picture I’m really happy ending up in 15thoverall, it was one of my better races,” Lowther said.

When asked how he felt beating out some of the top senior athletes to claim highest ranked Aussie male in the men’s C1, Lowther said it felt surreal.

“I didn’t believe that I was top ranked when I found out, but it gives me a lot of confidence that I have what it takes to be up there with the best, going into Tokyo 2020.” The confident, young Western Australian is keen to build on his performance, as he aims towards national team selection.

“I’ll have to wait and see what happens with selections as to what races I’ll be given but hopefully I’ll qualify for some World Cups and make the semis there and hopefully go to Senior World Championships and go from there.”

In the women’s K1, world number two and 2018 World Championships silver medallist Ricarda Funk (GER) claimed top spot in a time of 113.13 over world number one Jessica Fox, who finished in eighth place in the final (+47.43) after qualifying second fastest behind Funk in the semi-final. It was a tight finish with France’s Camille Prigent finished in second  (+0.29) and Slovenia’s Ursa Kragelj claimed bronze (+0.52). “I’m super happy with my performance this weekend, my run wasn’t perfect but in the end I’m really happy I finished in first position,” Germany’s Funk said.

Of her ongoing wrestle for top spot with Fox, the 26-year-old said she looks forward to the competition in Europe next and has relished her time down under.

“I’m really looking forward to the season ahead and continuing to duel with Jess.

“I’ve had a really good time here in Australia, I’ve stayed for four weeks but I actually don’t want to leave because I love it here.” Although she was penalised at the first gate (50 sec) during the final which knocked her down to eighth place, hometown hero and ‘Greatest Paddler of all Time,’ Fox, retained her Oceania Championship title as the only Oceania paddler, who progressed through to the women’s K1 final.

“I really wanted to attack it in that final and I was given a penalty on gate one. I took a few risks and sometimes they just don’t pay off, so ending up with a 50 second penalty is something that I can learn from. Apart from that, it was overall a faster time and I really wanted to go out with a bang, but it wasn’t to be today.”

The mutual respect between Fox and Funk was evident,

“Ricarda is phenomenal whatever the length of the course,” the Penrith local said. “She’s a very good athlete, an excellent racer and both physically and technically great.”

Aussies Ros Lawrence (NSW) and Kate Eckhardt (TAS) finished 16th and 23rd in the semi-finals, respectively with Eckhardt taking out the Oceania title win in the U23 age group.

The Canoe Slalom Oceania Championships continue tomorrow, Sunday, 24 February with the semi-finals and finals in the women’s C1 and men’s K1.

“I’m pretty stoked with my performance. I haven’t been preparing for wildwater this year and didn’t have a lot of training on the course but it ended up pretty good for me,” Vid Debeljak said.

“It’s been nice to have the slalom and wildwater together, a format which we also have every second year at the World Champs and it’s good fun, with lots of people watching, media attention and it’s nice to see wildwater grow a bit,” Debeljak added about wildwater being part of the Sydney International Whitewater Festival and with the ICF Canoe Slalom and Wildwater World Championships in Spain in September also including the two whitewater disciplines.

Kaylen Bassett, who will be representing Australia at the Wildwater World Championships also doubled up in the canoe slalom at the Whitewater Festival and has his eyes set at the international competition up next: “It’s been a pretty busy weekend and I haven’t really been able to focus on the wildwater as I normally would but I’m looking forward to a big training block before going to the World Cup in June and Worlds after that. So there’s bit of a gap now and lots of training.”

The Sydney International Whitewater Festival concludes tomorrow, Sunday, 24 February with the second day of semi-finals and finals in the Canoe Slalom Oceania Championships. The final day will also decide the first ever Freestyle Oceania Champions.

About the 2019 Sydney International Whitewater Festival
The 2019 Sydney International Whitewater Festival returns to Penrith Whitewater Stadium this weekend for the second round and a rematch of the world’s best whitewater paddlers at the action packed wet ‘n wild festival that includes the three disciplines of canoe slalom, wildwater and freestyle.
The two-weekend event saw the world’s best whitewater paddlers contest the Australian Open last weekend (15-17 February) with the 300 competitors from 25 countries returning this weekend for the Canoe Slalom and Freestyle Oceania Championships as well as the Wildwater GP2.

Entry to the event is free for spectators.
See the event website for more information: https://whitewater.paddle.org.au/