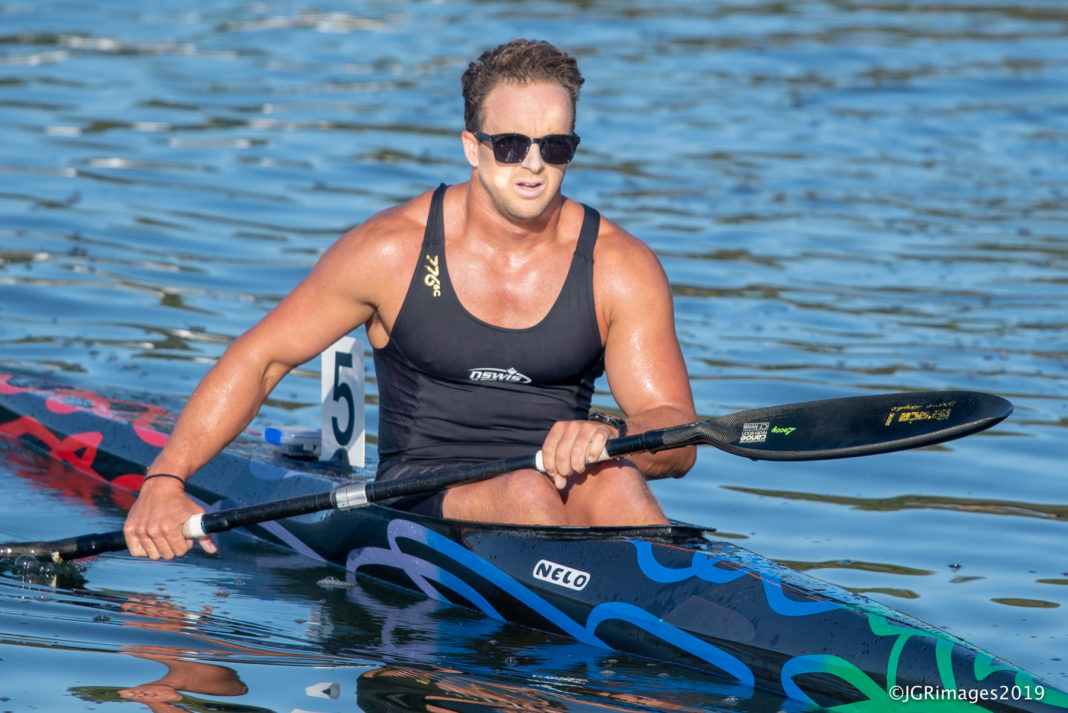 In his first racing back on national level, Tame took out the win in the men’s K1 200 and K2 200 together with Belgium’s London 2012 Olympian and former Wildwater World Champion Maxime Richard. He also won the B-final of the  K1 500 and finished fourth in the K2 500 together with Tom Norton (TAS). Tame wrapped up a successful weekend with a win in the K4 500 final together with Jayden Ellis (QLD), Matt Goble (SA) and Jordan Wood (QLD). The team won the tight final in a time of 1:22.00 just ahead of U23 World Champions Joel McKitterick(QLD) and Tom Green(QLD), who teamed up with U23 paddlers Jean van der Westhuyzen(QLD) and Jackson Collins(QLD) (1:22.59).

The men’s K1 200 saw a photo finish and dead heat between Lachlan Tame and Maxime Richard (BEL) ahead of France’s Rio 2016 silver medallist in the K1 200 Maxime Beaumont, who was 0.03 seconds behind.

“That was brilliant. That was my first A final against some really red-hot paddlers and it was nice to put in a good race,” Tame said after the K1 200 final.

“We had Maxime Beaumont in there who got a silver medal at the Olympics in Rio in the K1 200 and then also Maxime Richard from Belgium, who’s the consistent top ten in the world for the past six years. It was a good race and I’m just happy to be tied with them. Speed is something I have been working on for the past six weeks, so I’m happy it’s finally coming along a little bit which is fun.”

The 30-year old had his first competition back in the boat a couple of weeks ago at the NSW Canoe Sprint Championships and was happy with his performance again some strong national and international competition.

“It’s was my first national regatta back. I did NSW State Champs in January, but that was more for me to get the nerves out of the system. I’ve got nothing to prove to myself, I just want to see how I can get back, how healthy I can be and how fit I can get.

“And to get a result like that, to be within inches to some really good guys and to some guys who haven’t had such a fruitful break that I’ve had the past two years, it’s really nice,” Tame said.

Explaining his absence from competition over the last two years he added, “I first just had a break to get back in touch with life, get a reality check and doing a lot of surfing and building houses and walking the dog, so it was nice to do that. Then I started back in training and buggered up my right shoulder and that put me back with an operation in May last year so that really hampered what I had planned to do. I wanted to be back on the team last year but as of this point, I’m not on a team, so to me it’s just a building process. I would love to go to another Olympics but it’s more so about being fit and healthy for me. I’m just happy being on the better side of fit and healthy at the moment.”

National selections will be up next for Paddle Australia sprint paddlers at the National Canoe Sprint Championships at Champions Lakes in Perth, WA in March and it will be decided there, if Tame will get a shot at the international competitions this year.

“The goal this season is obviously to make the Senior team again and to try and be as consistent as I possibly can in every single race and also across all the distances. We have a lot of high-quality guys in our group at the Gold Coast and every session is a race even when it’s not meant to be and we keep pushing each other and it helps us all build together,” Tom Green said about his goals and the men’s sprint group.

Part of this group and amongst the ones to watch at nationals and selections are former South African Junior Canoe Marathon World Champion and U23 paddler Jean van der Westhuyzen, who will compete for Australia this season as well as Jackson Collins. The pair won the men’s K2 1000 U23 and finished second in both the men’s K2 500 and 1000.

Also in the women’s events, the youngsters are pushing to the top with NSWIS Junior paddler and 2018 National Junior Team member Kailey Harlen (NSW) one of the stand-outs. Harlen won the WK1 200 18 and the WK2 500 18 together with Sydney Northern Beaches club mate Georgia Weston and also took home the win in the WK4 500 18 together with Phoebe Wills-Grace (QLD), Caitlin Webber (SA) and Ashlee Schoene (SA).

The event that drew the most attention though, was the Open women’s K1 500, with Harlen hot on the heels of the Senior paddlers in the heat and semi-final and winning the B-final ahead of France’s Olympians Lea Jamelot and U23 paddler Brianna Massie (QLD).

“It’s been pretty good. I just wanted to see how I would go against the Open Women at this regatta. Just to see what my potential and threats are for the future and to see how I can push myself more overseas this year at potentially the Junior Worlds,” a confident Harlen said after the race.

And about the goals ahead she added, “I’m the top age for under 18s and hope to make the team again this year. I finished sixth in the women’s K1 500 at the Junior World Champs last year and hopefully this year I can improve my ranking and potentially make the podium – that would be the dream. For nationals my goal would be to try and win all the qualifying events.”

The up and coming competition from the younger paddlers is highly welcomed by Rio Olympian Alyce Burnett (QLD), who applauded Harlen’s performance.

“We’ve got a really good crop of girls coming through and Kailey Harlen is leading the charge for the juniors at the moment. She stepped up into the Opens on the weekend which is really impressive. We have an amazing group of girls coming through and I really hope that will carry on through. When we hop on the start line now, especially this season for a heat or a semi, you are just not quite sure where they are at, and they keep you on your toes. And that’s what racing is all about, having that question mark, not being totally complacent and having to push all the way to the line. And it’s a really good sign for Australia leading into Paris 2024 and beyond.”

Burnett had another strong regatta following a successful season opening at the GP1 in Adelaide in December. In Sydney, she won the women’s K1 500 ahead of K2 partner and fellow Rio Olympian Alyssa Bull (QLD) with the pair also winning the K2 500. In the women’s K1 200 Burnett finished third behind British Olympian Jessica Waters and Jo Brigden-Jones (NSW).

“I’m feeling like I’m paddling really well at the moment in the K1, but it’s also really good to jump back into the K2 with Bully (Alyssa Bull) as we haven’t been in it very much lately and the K4 went really well too,” Burnett said about the weekend’s racing.

“Obviously, there is a bigger picture in mind. GP2 was a bit of a trial run to see where we are at, so we know where to go back to in training and improve on. We are going to New Zealand this week to race the Oceania Championships against the Kiwi girls next weekend, which is really exciting. You can’t really pass up an opportunity to race the kiwi girls, they are some of the best girls in the world and it will be interesting to see where we are at, this time in the season. Then we head to nationals, which is our national team selection and from there into the international season.”

“It’s still really early days for the Olympic qualification season and we have to make it all the way to August (World Championships), but it’s good to be posting some alright times here and get a bit more into race mode later in the year.”

139 athletes from four countries contested the 76 GP2 events over the three-day regatta at the Sydney International Regatta Centre in Penrith.

The World’s Best in Western Sydney

Combining the three whitewater disciplines of canoe slalom, freestyle and wildwater in one event format, the world’s best whitewater paddlers will contest a series of events over two weekends (15-17 February 2019 and 22-24 February 2019) including the Australian Canoe Slalom Open and Oceania Championships as well as the Freestyle Nationals and Oceania Championships and the Wildwater Grand Prix 1 and 2.

The best Olympic slalom athletes and a stellar line-up of World Champions and Guinness World Record holders will compete in an action packed, wet ‘n wild Whitewater Festival, showcasing the exciting and thrilling disciplines of the three disciplines.

Over 300 of the world’s greatest paddlers from over 30 countries, including several Olympic and World Champions, will compete against Australia’s best, with Australian slalom star, greatest female slalom paddler of all time and Western Sydney local Jessica Foxkicking off the international season on home waters.