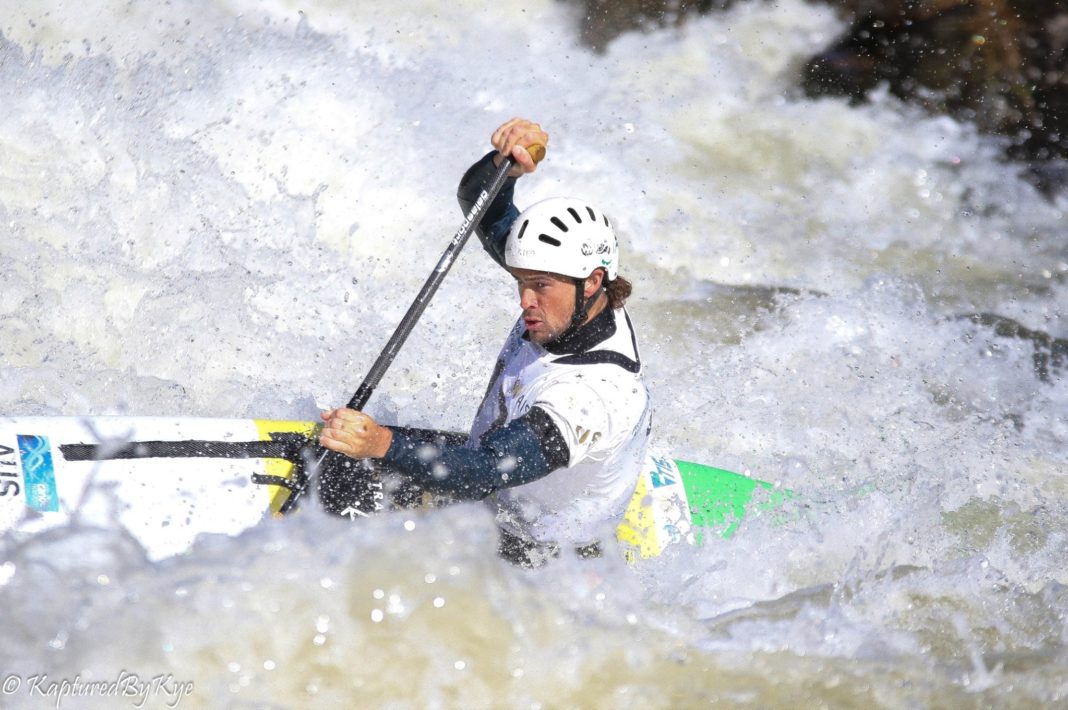 Paddle Australia’s national team canoe slalom paddlers Rosalyn Lawrence (NSW) and Daniel Watkins (TAS) have kicked off the Olympic qualifying season in style, impressing with a double victory and double national titles at the 2019 Paddle Australia Canoe Slalom Senior National Champs in Tasmania over the weekend (10-14 January 2019). Lawrence and Watkins took home the wins in both the respective women’s and men’s kayak and canoe events. 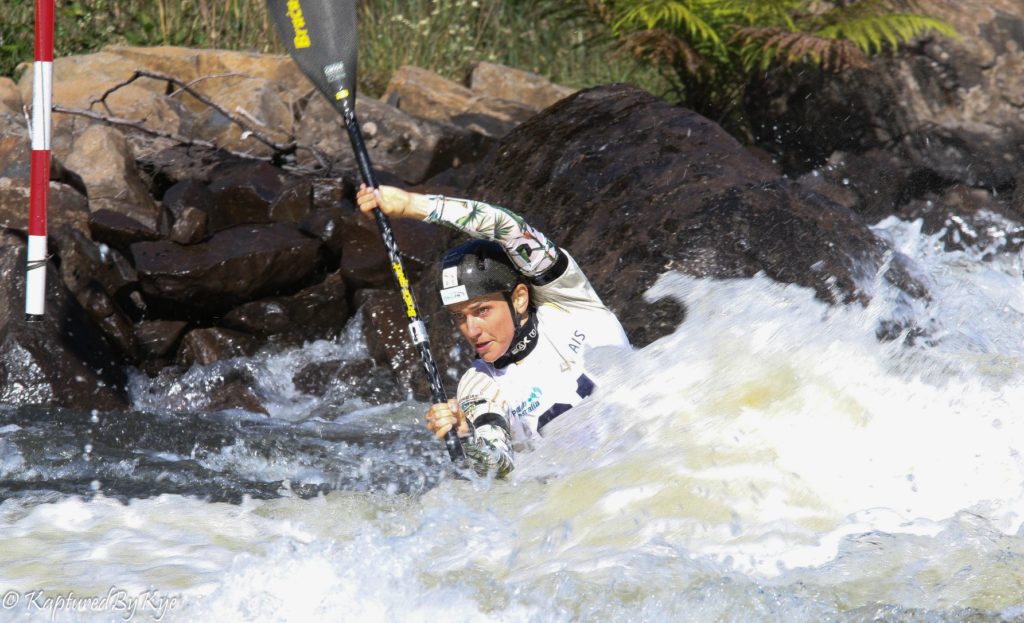 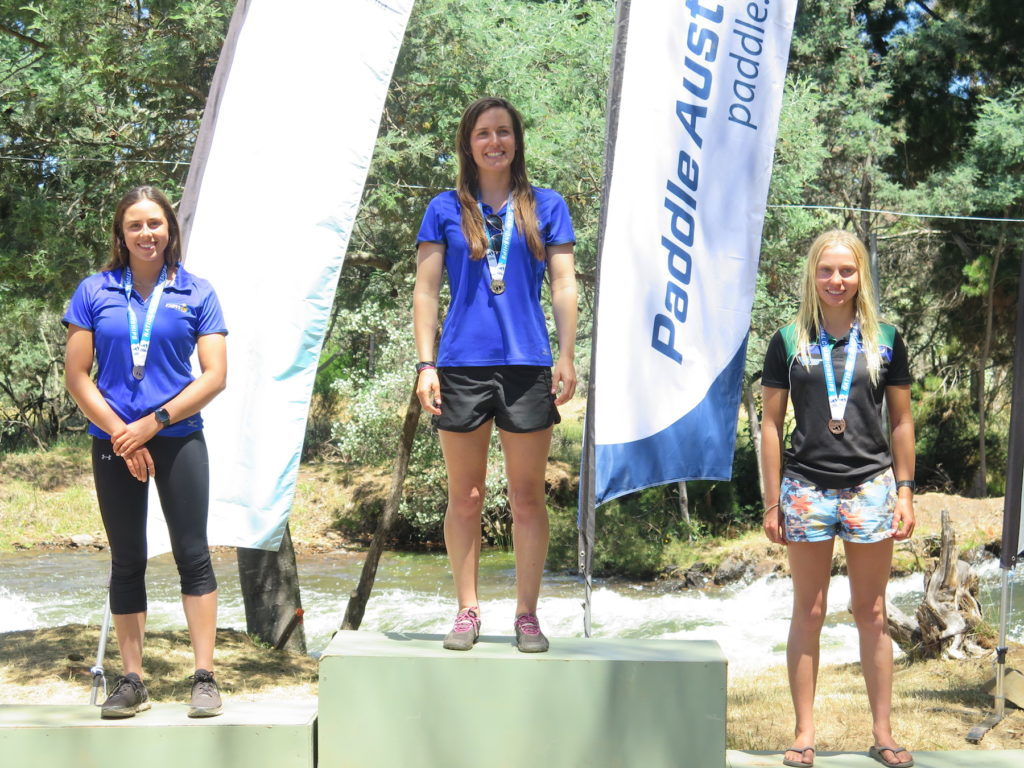 In the women’s events, 2018 national team paddler and women’s C1 World number nine Ros Lawrence successfully wrapped up the first regatta of the year with a win in the C1 on Sunday (13 January 2019). The 29-year old put down a time of 109.09 seconds in the final run to win ahead of 2018 U23 World Championships C1 bronze medallist Noemie Fox (NSW) in second (112.23). Local Tasmanian Kate Eckhardt completed in the podium in third (115.40). 21-year old Noemie Fox also took out the U23 win.

Already on Saturday, Ros Lawrence had won the women’s K1 ahead of Kate Eckhardt with Noemie Foxfollowing in third. This time around, 21-year old Eckhardt won the U23 category. 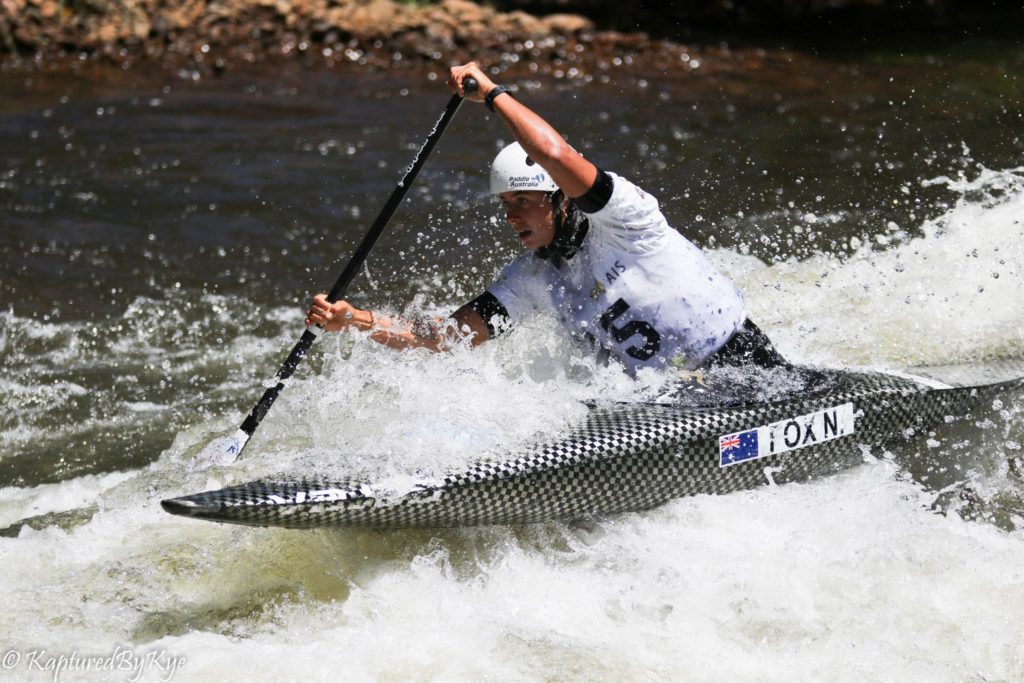 “I’m very happy to come away with the win in both events. There were a lot of things from my race runs that I need to work on but it’s hard to nail the perfect run at Brady’s Whitewater Course. I love training and racing here, it’s nice to be paddling in nature and the course is one of the best in the world. A big thanks to the Tasmanian’s for putting on a great event,” Lawrence said at the end of the regatta.

“I wasn’t sure what to expect results wise, the other girls are tough competition and Kate had the home course advantage. I think all of us were aiming for gold with Jess (Fox) choosing to sit out nationals. Senior selection will take place in February at the Oceania Champs and Aus Open, both in Penrith, and the next step for me will be to qualify for the team in order to be able to compete in our Olympic pre-selection events at the international races this year,” Lawrence added about the goals ahead.

Dual Olympian, World #1 and 2018 double World Champion Jessica Fox (NSW) did not contest the Senior Nationals in order to focus on training for a long international season ahead and after spending an extended period out of the boat at the end of last year following a surgery in October. Fox will start the international season on home waters at the 2019 Sydney International Whitewater Festival in February (14-24 February 2019).

In the men’s K1 and C1 individual events, Tasmanian and 2018 Australian Paddle Team athlete Daniel Watkins took home both wins and defended his 2018 titles. In the final run of the regatta, Watkins managed to improve his times recorded in the heats to post a winning time in Sunday’s blistering final of the MK1. 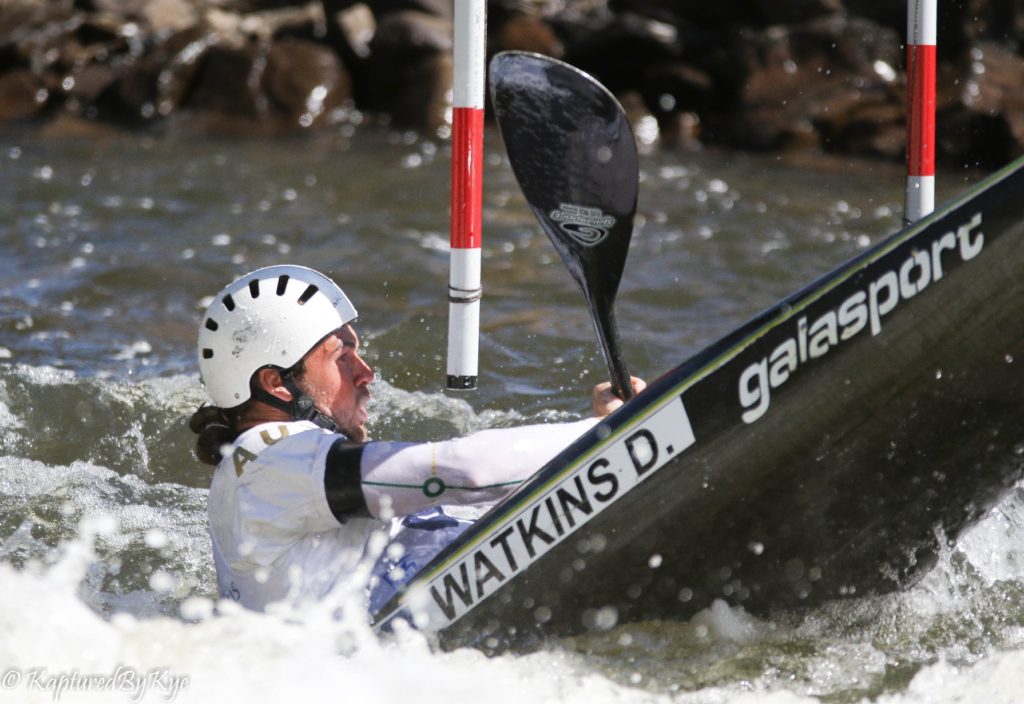 The U23 podium saw Angus Thompson (NSW) at the top with Tristan Carter (VIC) in second and Brad McLaughlan (VIC) in third.

“I never expected to get both and I am extremely happy with my performance at these nationals. I couldn’t have had a better first race of the year. I knew I could do it after last year and just had to keep the pressure of defending both titles and the expectation to perform on my home course out of my mind and focus on racing hard. Everyone was looking really fast all week and the racing was tight all weekend so I’m really happy to come away with both wins to start the season,” Watkins said. 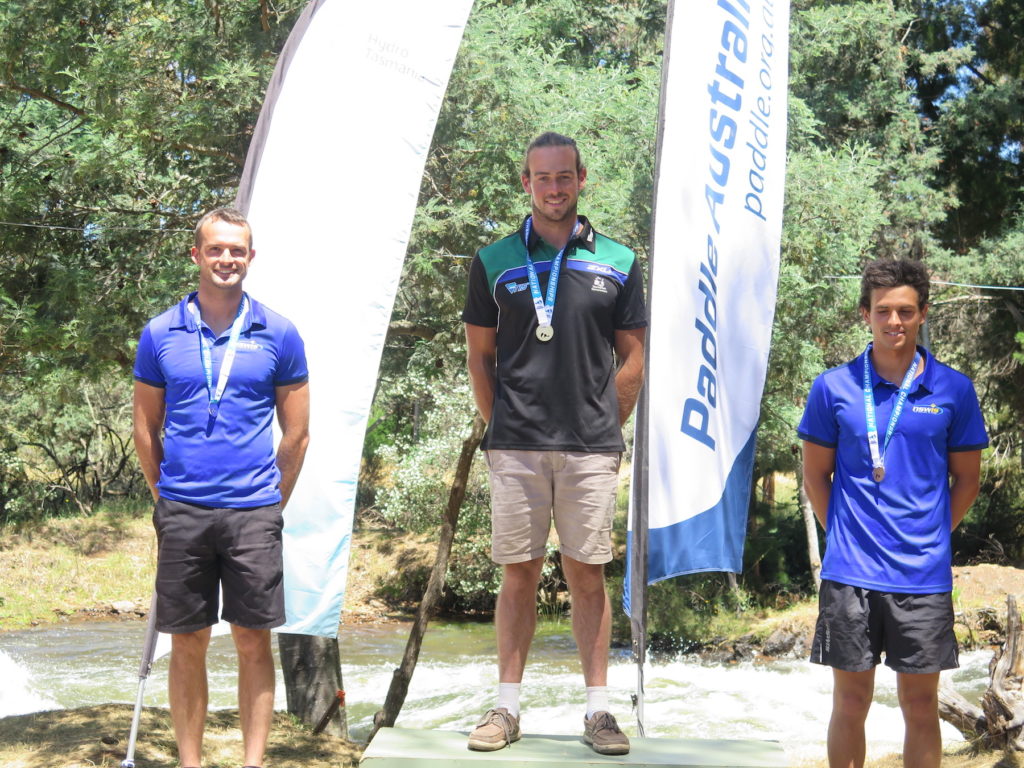 The 23-year old, who contested his last U23 season last year and made his first Senior semi-finals in both the men’s K1 and C1 at the 2018 ICF Canoe Slalom World Championships in Rio in September, made the most of racing on his home course that hosted the National Championships for the first time since 1989.

“I absolutely loved racing on my home course. It’s the first time I’ve had the chance to race here really. I raced senior selection here in 2O11, but I was very young and not at all competitive and there’s been nothing more than local races since. I’m stoked to see the nationals return to Brady’s after they were last there in 1989 and I hope it becomes a regular event.

“For sure I had a good advantage being on my home course, I’ve definitely spent more time on the water than most people, but it’s no more of an advantage than the Penrith locals have every other year at selection at the Whitewater stadium there. Plus, we have regular national camps at Brady’s and I think everyone has had the opportunity to paddle Brady’s enough to race their best,” Watkins said.

Senior National Team selection will be up next in February when Australia’s top paddlers will take on the best of the world at the 2019 Sydney International Whitewater Festival (14 – 24 February 2019) with the event at Penrith Whitewater Stadium including the selection relevant Australian Open as well as the Oceania Championships. 2019 is the Olympic qualifying season with the 2019 ICF Canoe Slalom World Championships in La Seu d’Urgell, Spain to decide the national quota places for Tokyo 2020.

Just over one and a half years out from the Tokyo 2020 Olympic Games, racing will heat up for the national squad selection races in February with Watkins having his eyes set on Olympic qualification and more.

“Penrith will be next and I will spend a month there to get familiar with the course again before selection and hopefully make the team in both the K1 and C1. The ultimate goal this season is to the qualify some boats for the Olympics in La Seu in September (World Championships). Then it’s just down to the races next February (2020) and I definitely have my eyes set on the Olympics and will be pushing for both classes.” 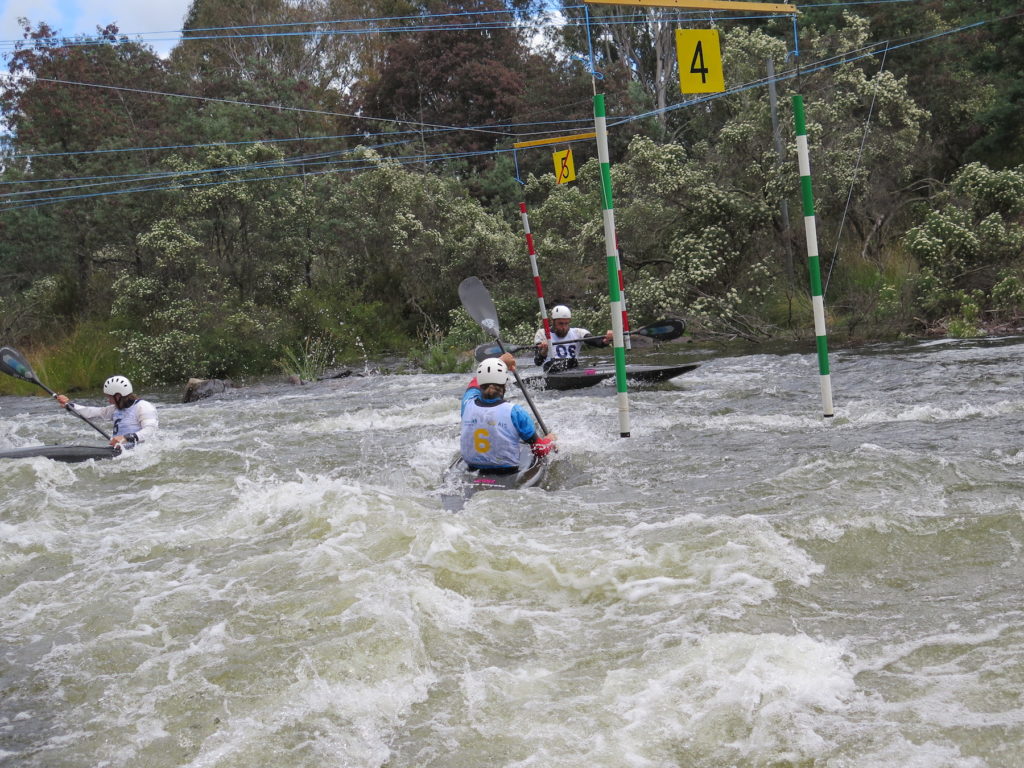 The Open C1 Team race was a tight tussle with the Western Australian team of Brodie Crawford, Steve Lowther and Jack Choate coming out on top of Ian Borrows (NSW) and Lachlan and Kaylen Bassett (VIC).

In addition to the Senior and U23 national title competition, the Senior Championships were a welcome opportunity for the younger paddlers (Under 18) to compete against the national team paddlers with the Senior event part of the 2019 Paddle Australia Junior Slalom Team selection series. 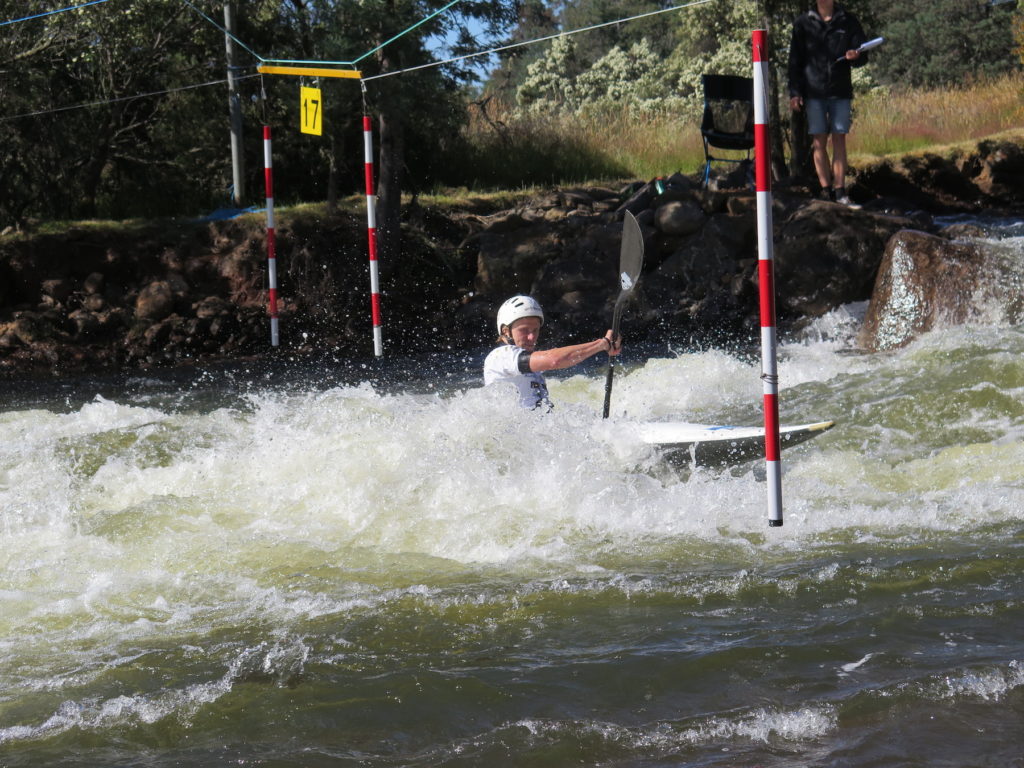 Brad McLaughlan (VIC) was the top Under 18 paddler in the men’s K1 and made the top-ten final followed by Mark Crosbee (VIC), while Jack Choate(WA) made the men’s C1 final. Sophie Wilson (NSW) and Claire Hodgman (TAS) were the top two junior paddlers making the women’s K1 final. All juniors will have to repeat their strong performances at Penrith’s Whitewater Festival next month, when the junior team selections will be finalised. 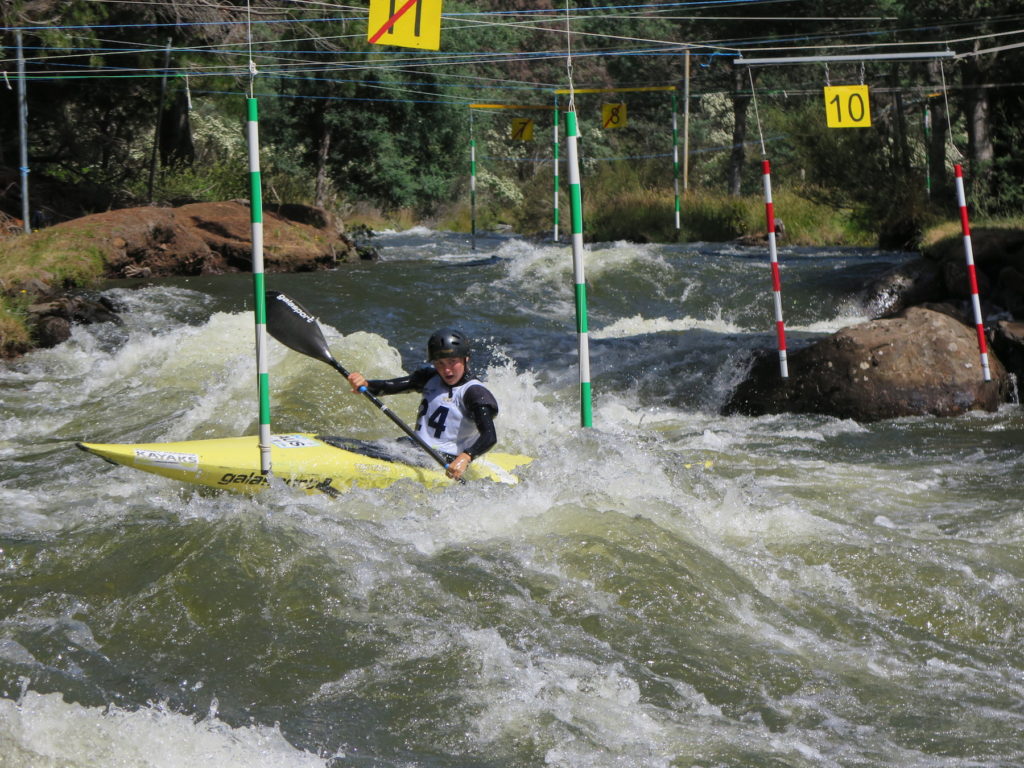 Before then, Paddle Australia’s junior paddlers will head to Victoria to contest the 2019 Paddle Australia Junior and Masters Canoe Slalom National Championships on the Goulburn River in Eildon next weekend (18-20 January 2019).

The 2019 Paddle Australia Canoe Slalom Senior National Championships were hosted by Paddle Tasmania and Derwent Canoe Club. The event was supported by Hydro Tasmania, the Tasmanian State Government, Tasmania Parks and Wildlife Services as well as by the Tasmanian Institute of Sport.

Find out more about the event at Brady’s Lake, Tasmania at the event website: https://slalom.paddle.org.au

Athlete profiles of the 2018 Australian slalom team athletes can be accessed on the Paddle Australia’s website: https://paddle.org.au/canoe-slalom-athlete-profiles/