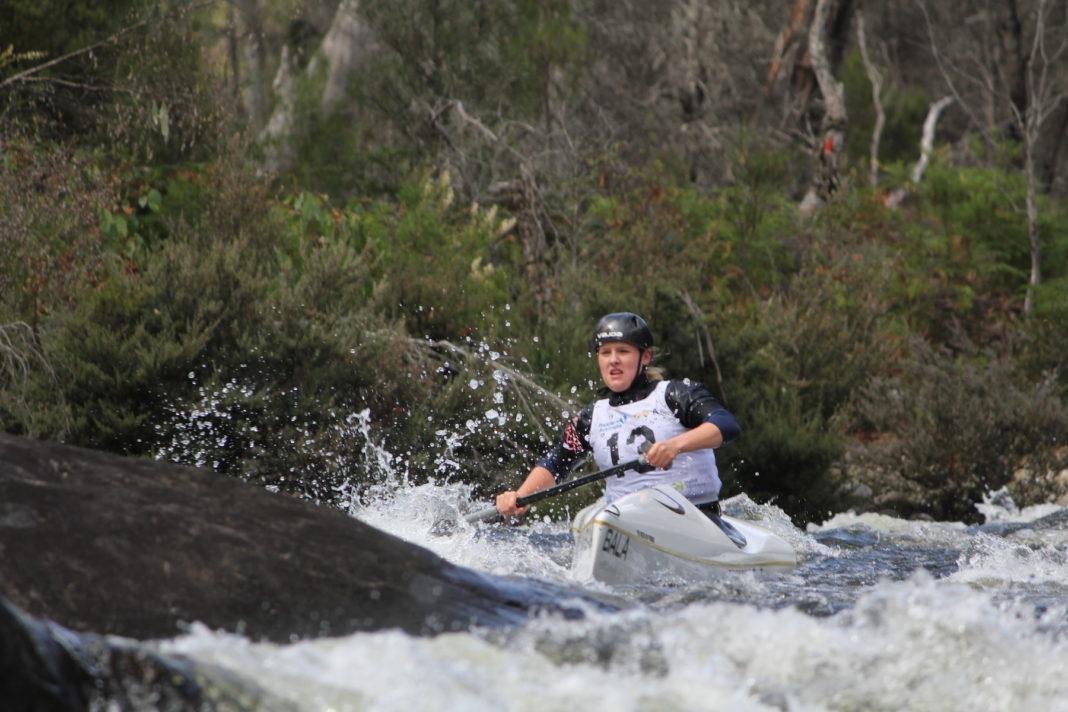 The 2019 Paddle Australia Wildwater National Championships wrapped up on Sunday (6 January 2019) after three days of competition on the Upper Mersey Whitewater Course in Tasmania (4-6 January 2019). Contesting two days over the longer Classic Race distance of four kilometres and finishing up with the 350-metres Rapid Sprint Races, the event was part of the Paddle Australia Wildwater Pre-Australian Selection series with results relevant for 2019 national team selection.

Local Tasmanian and former wildwater national team paddler from Launceston, Dan Hall was one of the stand-out paddlers of the over 50 athletes from all across Australia who competed on the Mersey river. Returning to competition after eight years of absence, Hall made waves winning both the Pre-Australian Classic Selection Race on Friday as well as the Wildwater Classic Race on Saturday. He also finished second in the Rapid Sprint race on Sunday. “Pending the final decisions of the selection panel, I’m absolutely thrilled to rejoin the Wildwater K1 team. I was first part of the team in 2003 and felt like I was ready to have another crack,” the 42-year old said.

Hall was up against some stiff competition and had 2018 Wildwater National Team paddler Rob McIntyre (NSW) right at his heels in the classic races. McIntyre finished second on both classic race days, but relished the shorter course and took line honours in the Rapid Sprint Race Open Men’s Kayaking (K1) event. Dan Hall came a close second in the sprint, with Alex McIntyre (NSW) taking out third position only three seconds behind. Hobart paddler and 2018 Canoe Slalom Senior and U23 representative Daniel Watkins, who will also be contesting the 2019 Canoe Slalom National Championships in Tasmania next weekend, followed one second behind in fourth position. It was a hotly contested race with less than five seconds separating first and fourth place.

McIntyre, who finished fifth in the K1 men’s individual sprint race at last year’s 2018 ICF Wildwater World Championships, his best result at a World Championships thus far, enjoyed the tight competition with Hall – one of his role models and inspiration in his wildwater career. “Any time Dan lines up, it’s going to be an exciting event. Some of my greatest inspiration early on in my paddling career came when I was a junior racing as a forerunner at the 2009 Tasmanian World Cup series. Watching him medal there and the dominance he displayed at many national champs at the time really motivated me to do the same. At 42 to be still taking out national titles is a credit to the athlete he is. I’m half way there. Hopefully next time I can take that classic race from him,” 26-year old McIntyre said. In the Open Women’s K1 2018 Paddle Australia wildwater representative, Open and Under 23 paddler, Georgina Collin (WA) impressed when she dominated the women’s field as the top-ranked female across all events and finished a successful weekend as the national wildwater champion in U23 and Seniors in both the classic and sprint races.

In the final race on Sunday, Collin managed to take two seconds off her first run to finish six seconds ahead of second-place getter Demi O’Brien (WA).Jessica Wilson(NSW) took out third place. “I felt really great through the whole competition and I was pretty surprised with my results. I trained hard this pre-season and I felt really amazing on the water. I’m so excited for U23 worlds in Banja Luka! It’s my coaches home city so I can’t wait to make him proud there,” an excited Collin said at the end of the competition with final selection decisions still pending. Collin is also planning to contest the canoe slalom nationals on the upcoming weekend as well as the canoe slalom selections in February.

In the Under 18 Women’s K1 sprint event, Bendigo’s Imogen Douglass (VIC) was again victorious after also taking home the win in the classic event. Ruby Elms (VIC) took the honours in the Under 16 Women’s sprint race, while Sophie Wilson (NSW) won the classic race. Victorian State Champion Madison Wilson (VIC) took home the win in both the sprint and classic C1 U23 event. In the classic race the order was reversed with James Humphrey taking home the win ahead of Thomas Elms and Ben Strmecki in third. Thomas Elms, Luke Anderson and Thomas Ladson won the U18 sprint team event. In the Men’s Canoe (C1), 2018 canoe slalom junior national team paddler Rob Janiszewski (VIC) took out the Under 23 sprint event after already winning the classic events. Thomas Elms (VIC) took line honours in the Under 18 sprint, while Luke Anderson won the Under 16 C1 event. Anderson went on to win the C2 Under 16 event together with brother Jack Anderson.

Line honours for the Men’s Canoeing (C2) went to Victorians Kaylen and Lachlan Bassett in both the classic and sprint events. Strong performances were also seen in the master’s events, with Mathew French (VIC) taking home the win in both the +35 K1 sprint and classic events, while Warren Elms (VIC) won both events in the +55 age group.

Sunday’s results finalised the selection process for the Rapid Sprint event and with results from the two Classic Races of the past couple of days, Paddle Australia’s Wildwater Selection panel now have the details to determine final membership of the national squad across the age groups. The classic race also was an International Canoe Federation (ICF) ranking race and will count towards world rankings. The 2019 Paddle Australia national wildwater provisional teams are expected to be announced in one week’s time with teams to contest the Senior World Cup and World Championships events in France (Treignac – Vezere, 6th – 9th June 2019) and Spain (La Seu’Urgell, 25-29 September 2019. Under 23 and Junior athletes will contest the World Champs in Banja Luka, Bosnia and Herzegovina 23-28 July 2019. The final teams will be announced post the Wildwater Grand Prix 1 and 2 at the end of February.

The 2019 Paddle Australia Wildwater National Championships were organised in partnership with Paddle Tasmania and with support of Paddle Tasmania’s partners Hydro Tasmania, Tasmanian State Government, Tasmania Parks and Wildlife Services and the Tasmanian Institute of Sport.

Paddle Tasmania will also host the 2019 Paddle Australia Canoe Slalom Senior National Championships which will be held at Brady’s Lake whitewater course from 10 to 13 January 2019. For more information on the event and entries see here: https://slalom.paddle.org.au