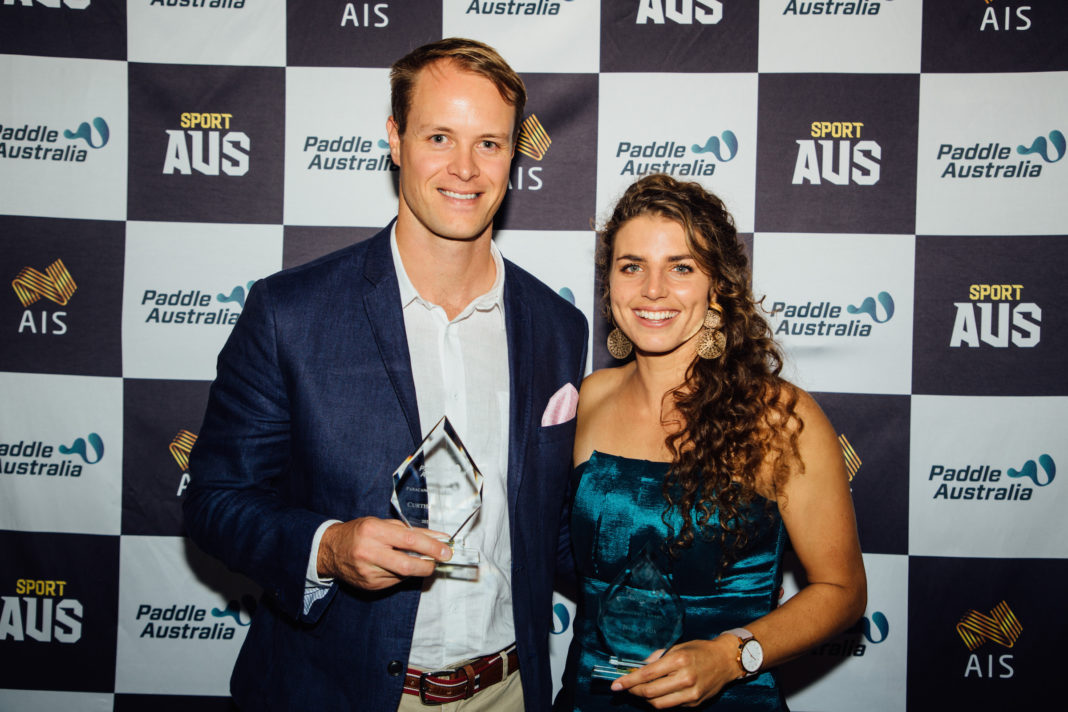 The pair headlined a stellar line-up of athletes, coaches, instructors, technical officials and volunteers, who were recognised for their outstanding achievements and efforts over the past year at the Annual Awards night hosted by Seven News Sydney’s sport presenter Jim Wilson at the Stamford Plaza Sydney Airport.

Paddle Australia’s greatest individual slalom paddler of all time, Jessica Fox, also received the prestigious President’s Award in recognition of her outstanding achievements this season, including double World Champion gold and the overall World Cup win in both the women’s K1 and C1 events. “I didn’t expect a season like this! I go into each year wanting to improve, wanting to keep learning and just keep doing my best at competitions. It’s been the perfect season and the perfect world championships and it’s amazing to receive this recognition, Jess Fox said.

“I really enjoyed this season. We’ve had a great team, we’ve had a great tour with lots of good results from the athletes. It’s quite a young team coming through with some good energy and I had the best year.

“I’m so grateful for all the support I receive from everyone at Paddle Australia, from the community, all those people who put in the work to run the races at Penrith, our volunteers, our officials, my family and our team of coaches and this evening has been wonderful to celebrate everyone who’s a part of it.

“Thank you to the whole Paddle Australia staff, our slalom team for the amazing evening and congratulations to all the other award winners and finalists.”

“I would like to dedicate this to my pépé Bebert, who I know was very proud of us and I know Noemie (Fox) and I will always be on the water and he will be with us.” Fox also received the Coach of the Year Award on behalf of her mother and National Canoe Slalom Coach Myriam Fox (NSW), who was recognised for the success of her group of female athletes this season with all of them posting career best performances.

“Thank you very much on behalf of Myriam, who unfortunately can’t be with us tonight as she had to head to France. Her dad, my grandfather, was a massive influence on her as an athlete and as a coach and we are here because of him. He was at the riverbank until the very end and mum’s got the same passion and the same drive as him. She gives a lot to her sport and her athletes and I’m looking forward to another great year ahead and another two years as well,” Fox said paying tribute to both her mum and grandfather.

The Paddler Of the Year – Olympic as well as the President’s Award recognise a season of a life-time for Jessica Fox, who wrote sporting history this year, breaking several records in the process and becoming the most successful individual slalom paddler and greatest female slalom paddler in the history of the sport – all at the young age of 24.

Jess started the international season with a bang and a “triple double” World Cup win, becoming the first athlete – male or female – to win the C1 and the K1 consecutively at three World Cups. Her breath-taking success continued when she took home the 2018 World Cup crown in both the C1 and K1.

But she topped it all by winning double gold in the women’s K1 and C1 at the 2018 ICF Canoe Slalom World Championships and finishing the season unbeaten in a boat class (C1) – a feat never achieved by anyone else in the sport – men or women.

“No individual slalom paddler has ever achieved what Jess has achieved this year. She’s a great ambassador of our sport and she continues to be a role model for our aspiring athletes. We are so very proud to have such an amazing athlete and wonderful human being in our sport and representing paddling in Australia and around the world,” Andrea McQuitty, Paddle Australia President, said after awarding Fox received the President’s Award from her.

“I’m very sorry about your grandfather who played a very big part in your life and what your family has done for paddling around the world is so extraordinary. Paralympic Champion Curtis McGrath OAM (QLD) also had a record-breaking season, finishing the season unbeaten and setting World records in the Paralympic events he competed in.

Unconquered, McGrath is the most successful male Paracanoeist in the world of paddling and his impressive medal tally over the short period of only four years in the sport, now includes Paralympic gold, eight World Championships gold and one silver medal as he prepares for the Tokyo 2020 Paralympic Games.

Curtis also continues making waves off the water and has been juggling his world-class training with his ambassador role for the 2018 Invictus Games in Sydney, carrying the message of the power of sport in physical and mental rehabilitation and mental well-being around the world.

“Throughout my rehabilitation, sport has given me the power to come out and give me a reason and I was very fortunate to be part of the Invictus Games this year. Although I wasn’t competing, I was on the sidelines cheering or in the commentary box and it was an amazing experience,” McGrath said. Reflecting on his season he added: “I went into this season not expecting too much. I was very surprised by my results at the World Champs when I jumped into a brand new boat in the VL and still managed to break my record in the class and put myself in a good position.

“Fortunately I’ve had an amazing team around me and some great support from the coaching staff. Andrea (King), who pretty much established paracanoeing on the map and gave me the foundations for the last four years, supported me until she went off to have twins and Guy (Power) has picked up the stop watch and made sure that we are on time and doing things well since then,” McGrath said paying tribute to his coaches.

“Paddle Australia is forever growing. We have a great athlete commission now and there is a voice out there for the athletes. It’s great to be part of this and recognising all the volunteers, the technical officials and it’s important that we recognise the efforts of everyone involved in our sport and it’s great to be here tonight,” McGrath added about the night.

With less than two years to go to the Tokyo 2020 Paralympic Games and with the VL class premiering in Tokyo, it will be the chance for McGrath to go for two gold medals.

“Next year is a big year, with qualifying coming up for both Paralympians and Olympians and there is a big goal on the table. I want to compete in two events. I came away from Rio feeling that I hadn’t done enough because I wasn’t puffed enough and felt like I hadn’t pushed myself enough. It felt like I wanted more and I’m very lucky that I have that opportunity.” The Team of the Year Award went to Queenslanders and Currumbin Creek paddlers Thomas Green and Joel McKitterick, who won the U23 World Champion title in the men’s K2 1000 at this year’s 2018 ICF Canoe Sprint Junior and U23 World Championships. The pair stormed to an impressive gold medal, careering away to win the U23 K2 1000 world title by more than two seconds.

Tom Green was also a finalist for the Paddler Of the Year award after successfully premiering on the Senior Team at only 19-years of age this year and finishing a close fourth in the men’s K4 500 at the ICF Canoe Sprint World Championships. Paddle Australia’s future is looking bright with a long list of high-performing Junior paddlers amongst the finalists.

Slalom paddler Alexandria Choate (WA) won the Junior Paddler of the Year – Olympic Award after her best career result yet and a fifth place in the junior women’s C1 at the 2018 ICF Canoe Slalom Junior and U23 World Championships.

“The Youth Olympic Games was an incredible experience. I just love sport, everything about it, competing, pushing myself as well as the social side as well, seeing everyone and meeting people like Jess,” 16-year old Jenaya Massie said.

“My hopes are the 2024 Olympics. I know it’s a big goal, but I’ll try my best, train hard and we’ll see how I go,” Massie said about her aspirations.

Marathon paddler Cathy Venning (SA) was awarded the Masters Paddler of the Year after a successful year winning two gold medals in the K2 and a silver medal in the K1 at the 2018 ICF Canoe Marathon Masters World Cup. National team slalom paddler Rosalyn Lawrence (NSW) was recognised for her efforts as a Junior Development Coach based at the Penrith Whitewater Stadium with the 2018 Award of Merit, which is awarded for outstanding achievement in paddling in either administration or sporting endeavour. More details about the finalists can be found HERE. TECHNICAL OFFICIAL OF THE YEAR INSTRUCTOR AND GUIDE OF THE YEAR