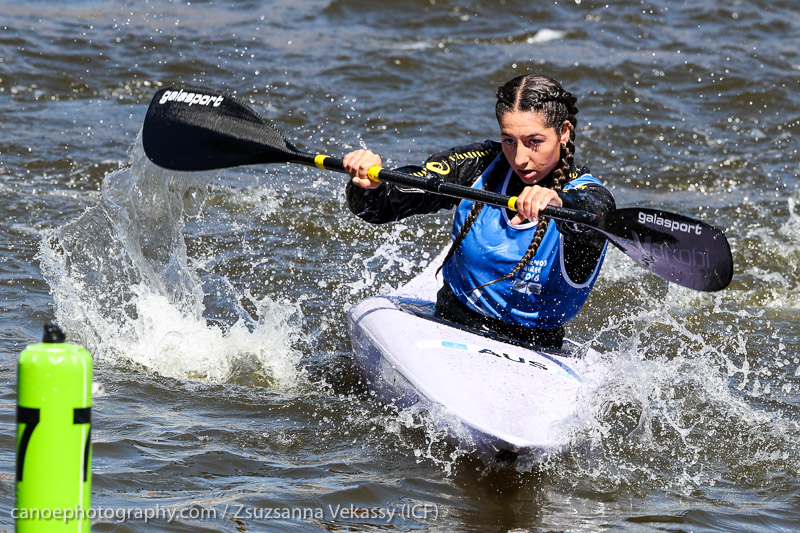 16-year-old Jenaya Massie (QLD) is already planning how she will lift her canoe paddling to the next level after finishing her competition at the 2018 Youth Olympic Games in Buenos Aires, Argentina.

The Sunshine Coast paddler made the quarter finals in both the head-to-head canoe sprint and the slalom obstacle race.

She was particularly pleased with how she improved over the duration of the event, finishing with the slalom on Monday (15 October). “From my first race to the third I dropped three seconds, so I couldn’t be happier. I nailed the ramp, nailed all my turns, and just worked on everything that Jess (Fox) told me to do, and I’m really happy with how it turned out.

“In the kayak I knew that all the Hungarians and all the Europeans are really high skilled and really fast, I had seen their results at Worlds. So I was just hoping to do my best, and know that when I get off the water that was the hardest I could have gone.” Following the Olympic Hopes Sprint Regatta in Poland in September, the Youth Olympic Games was the first major international event for Massie, and she’s hoping to use what she learned from taking on athletes from all over the world in the next stage of her career.

Her first step will be return to a format she is much more familiar with.

“I’ve learned that racing is hard, and you have to back up racing with less than half an hour between the races,” she said.

“But I’m a surf girl, so used to all of that and it’s taught me a lot.

“When I get home I’ve got World Surf Lifesaving in Adelaide, so I’m hoping to go alright in that, and then get back into the kayak season. I need to just work on my technique now before I take on the next level.”

Jenaya Massie was the sole Australian representative at YOG canoeing competition after securing the quota for the Oceania region at the World Youth qualifying event in Barcelona, Spain in April. Massie finished eleventh in the head-to-head sprint race on Friday, before also making the quarter final in the slalom obstacle race on Monday.

She will be competing next at the 2018 Lifesaving World Championships in Adelaide (16 November to 2 December 2018) before the domestic canoe sprint season starts in December.