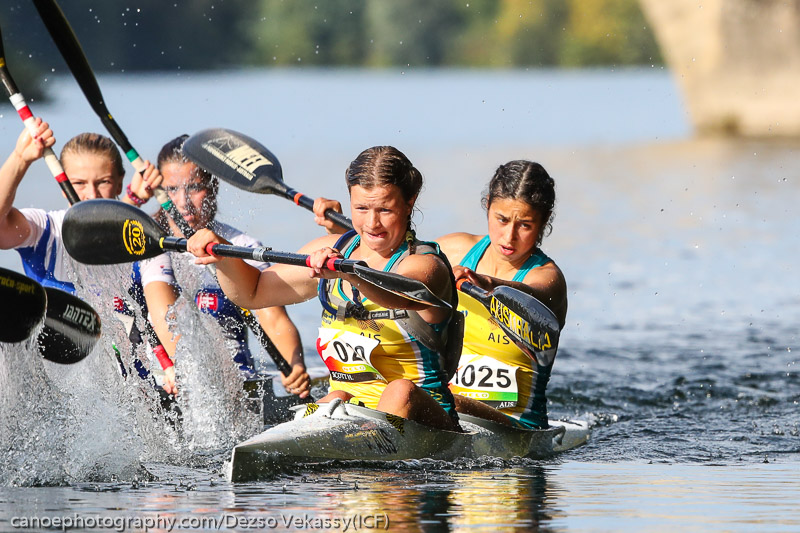 A fifth placing for Victoria’s Brianna Jones and Hannah Scott was the highlight of Australia’s performance on day two of the 2018 ICF Canoe Marathon World Championships in Prado Vila Vaerde, Portugal, overnight.

Jones and Scott found themselves in the bronze medal position for much of the K2 junior race, behind two strong Hungarian boats, and finished the race strongly to take fifth.

“We weren’t really expecting to see just the two Hungarian boats in front of us, we were quite surprised to find ourselves up there,” Scott said.

“So we just did what we could to stay with everyone to see what would happen.”

“I think we didn’t realise how much in front of the group we were. The last lap was quite stressful. We were getting quite a lot of water in our boat, and when we stopped to empty the girls from Great Britain took off.”

Jones said she was nervous how they would go after not spending much time training in the K2.

“I was scared because we were both backing up from yesterday, we both raced in the K1, so I was a bit paranoid how that might impact us,” Jones said.

“I know Hannah would be a strong doubles partner, we knew what we were getting into.”

“It was a hard slog from the start, we got popped out at the start of the race and then just tried to work our way through,” Spanner said.

“I guess we were aiming for top ten, top ten is a great effort, but we’re pretty happy with our performance.

“We were struggling throughout the race, we had a bit of a lean, so to overcome that was pretty good.

“It’s both our first Worlds, so this was a great opportunity to learn and get new knowledge and see what it’s like to take on these World Champions.”

In the men’s K1 U23, Casey Haynes (VIC) finished 18th and Logan Dutton (VIC) 19th in the hot Portuguese conditions.

Haynes said every race is a learning experience.

“I know I need to go faster,” he said. “It really hurt out there, but luckily I joined up with the paddler from Sweden and we worked together to get to the finish.

“I just need to keep learning and build on my experiences.”

The senior competition begins today, with C1 and K1 men’s and women’s races.

Follow racing via the GPS tracker with real time data from all boats in each race, including DVR option, statics, splits, distance between groups and boats, speed, laps: http://www.tractrac.com/web/event-page/event_20180904_ICFCanoeMa/1246/

You can also download the app from the AppStore called TracTrac and go to 2018 ICF Canoe Marathon World Championships. You can then follow the boats around the course.

Live stream and live results are available on www.canoeicf.com.