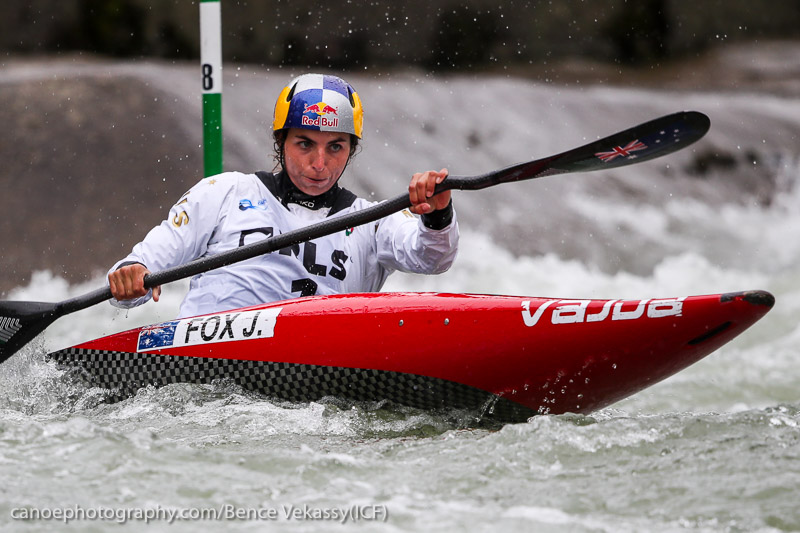 Jessica Fox (NSW) has won the silver medal in the women’s K1 at the fourth Canoe Slalom World Cup of the season in Tacen, Ljubljana, Slovenia. She also took home the title in the women’s C1 after an early cancellation of the event.

Like a European summer, the incredible gold-medal winning run of Australian canoe slalom athlete Jessica Fox had to end eventually. On a day more resembling winter in Tacen, Slovenia, Austria’s Corinna Kuhnle delivered the K1 run that finally snapped the historic dominance of the 24-year-old Australian, who came away with silver.

In a late announcement on Saturday, organisers were forced to cancel Sunday’s World Cup racing because of dangerous river levels.

Torrential rain in the region made it impossible to stage Sunday’s races, meaning the results of Friday’s heats in the women’s C1 and men’s K1 will stand as the official standings for Tacen.

Fox was unbeaten in both K1 and C1 after three ICF World Cups this year, and it took something special from the two-time Olympian from Austria to stop the rampaging Australian in the pelting rain.

Kuhnle posted a clean time of 107.94, with Fox second in 109.01, and another Austrian, Viktoria Wolffhardt, winning her first ever K1 medal by finishing third.

Lawrence, finished 10th in the final. Fox said she was happy to finish in the medals again.

“I’m just really happy to be on the podium again, I’m really happy with my run except for the last two gates and the finish line,” Fox said.

“After each weekend I was telling myself ‘wow, it’s going to be really hard to back that up’. It’s just been an amazing season, my best season ever.

“To be on the podium like this, and be consistent, I think that’s what is important.” Fox said she was trying to treat Saturday’s race the same as every other major event.

“I was nervous for this race because there had been a month break between races, and I guess I’m always a bit nervous on Tacen because the course is really challenging,” she said.

“I just approached this race wanting to use the water well, and reacting well to whatever came my way.

“And to step it up in the final and go a bit faster than my semi is always my goal, so second place today, and the season is not over.”

With her performances this season, Fox has already created history. Ahead of Tacen, the two-time Olympic medallist, was unbeaten in both the women’s K1 and C1, winning golden doubles at the World Cups in Liptovsky, Krakow and Augsburg, a record without peer in the history of both men’s and women’s paddling.

“It’s been an amazing start to the season and very special and obviously and I’m proud of the way I raced. I’ve never won three gold medals in the K1 before in World Cups and I’ve never won the overall world cup in the K1. It’s exciting that I’m in the running for that.”

The overall World Cup will be decided at the World Cup Final in La Seu, Spain next weekend, 7 – 9 September 2018.