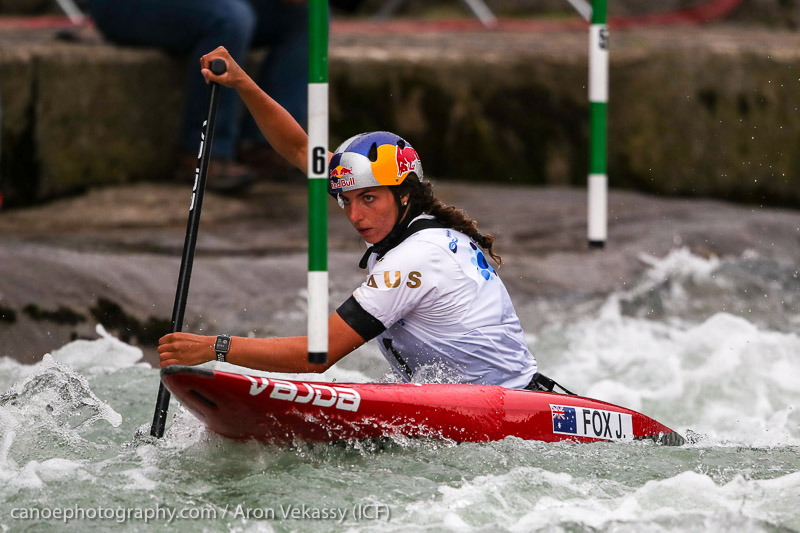 Australia’s Jessica Fox has already created history in 2018, and on Friday she showed every sign that her total domination of canoe slalom this year may extend into a fourth weekend.

Her performance was once again the highlight on a strong opening day for the young Australian team, with almost every athlete successfully progressing to this weekend’s semi-finals at the ICF Canoe Slalom World Cup 4 in Tacen, Ljubljana, Slovenia.

Fox (NSW), a two-time Olympic medallist, is unbeaten in both the women’s K1 and C1 this year, winning golden doubles in Liptovsky, Krakow and Augsburg, a record without peer in the history of both men’s and women’s paddling.

On Friday in the rain at Tacen, Slovenia, the 24-year-old safely navigated her way into both the K1 and C1 semi-finals this weekend. She was seventh quickest behind Germany’s Ricarda Funk in the K1, and five seconds quicker than the next best in the C1.

“It’s been an incredible start to the season, my best ever in both K1 and C1,” Fox said.

“It would be amazing to go four, five, but the competition is always tough, especially in Tacen, so I’m looking forward to getting out there and having a good crack at it.

“I guess that’s what is exciting. This is the first time I’m in the running for that.”

Rosalyn Lawrence (NSW) also had a strong day, finishing second behind Fox in the C1, and 18th in the K1.

“I got off to a bit of a slow start this season, but I’m learning and improving,” Lawrence said. “I’m looking forward to this weekend.”

Demelza Wall (WA), fresh from competing at the U23 World Championships, is into her first senior C1 world cup semi-final after finishing 20th on her first run. Steven Lowther (WA) needed a second run to qualify for the semi-finals of the men’s C1, but went through in ninth position despite his canoe springing a leak.

“I had two touches, which is not really what I want, but my base speed was good,” Lowther said.

“It’s definitely one of the most challenging course I’ve paddled on. But with that comes a lot of fun, and it’s exciting to race on.

“It’s really good for me to test my skills against the best.” Ethan Hodson (NSW) was 12th on his second C1 run and will miss the semi-finals.

In the men’s K1, Angus Thompson (NSW) finished 26th on his first run to qualify straight through to the semis, while Ben Pope (WA) picked up a 50-second penalty for a missed gate on his second run to end his weekend of paddling.

Racing continues on Saturday with the men’s C1 and women’s K1 semi-finals and finals.