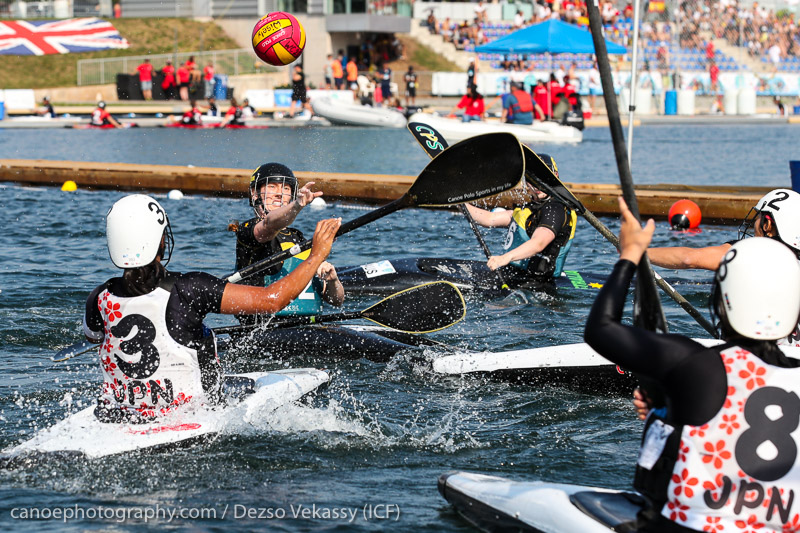 The 2018 ICF Canoe Polo World Championships wrapped up in Welland, Canada over night with Australia’s men’s team finishing twelfth and the women’s team sixteenth and both teams showing plenty to get excited about for the future.

Finishing 12th, the men’s team automatically qualified for the 2020 World Canoe Polo Championships in Rome Italy and despite just missing their target of making the top ten, Captain Stephen Hubbard (SA) was positive about the experience. “This is probably the most positive Australia has been looking for a while and a World Championships like this is good for us to get an idea where we sit, and which skills we need to work on.”

“The European teams are all pretty similar, they are fast and strong. We don’t get a chance to play against this style of play, we have New Zealand and then every two years we come and we try and get our footing against these teams.” After two game losses against Poland and Iran on the final day of the tournament Men’s coach Matthew Moore said his team did not finish the event the way they would have liked.

“Every loss is frustrating, and you sit there and think about what you could have done better,” he said. We made a step up from last World Champs, when we were 15th.  We got ourselves back in the top 12, but it probably would have been nice to get ourselves higher in the ninth to 12th band.”

“We’ve done a lot in the last 12 months, and we just have to do some more work to rise up a bit further.” It was the first time since 2012 that Australia’s canoe polo women returned to the World stage with all of the girls first time World Championships players.

And while the team had two losses on the final day of competition there was plenty to get excited about for the young team with many players under 21 and the youngest player Anna Thompson (QLD) only 17-years old. “The girls had a goal before we started to make the top 14 which is automatic qualification for 2020 and we slightly missed that, but it’s still about the journey.

“There was plenty of intent there from the girls but we couldn’t always execute that and that’s really indicative on where we are at a group,” women’s coach Rebecca Jennings reflected.

“But this is also one of the many learnings the girls were getting. How to manage their bodies and their mind, the excitement of being here, and to see the fitness you need to have to play the likes of Great Britain and France. There were just so many lessons on how to compete at this level and we’ve learnt so much, so it’s been fantastic.”

And about the final day of competition Jennings said her young team were getting tired towards the end of a long campaign.

“We had a couple of disappointing games today,” Jennings said after the team lost both against host Canada as well as against Japan on Sunday. “It’s a long tournament, so a long time to be on tour and playing, so we were probably just getting tired and missing some of our execution.”

About the squad as a whole she added, “Australia hasn’t been at the World Championships since 2012, so it’s really exciting that we have a team this year of really keen girls,” Jennings said.

“The team is really young, which is a good sign and we’ve had a lot more interest building in canoe polo in Australia.”

After heading home to Australia, many of the players will take short breaks before returning to the domestic summer season later in the year.