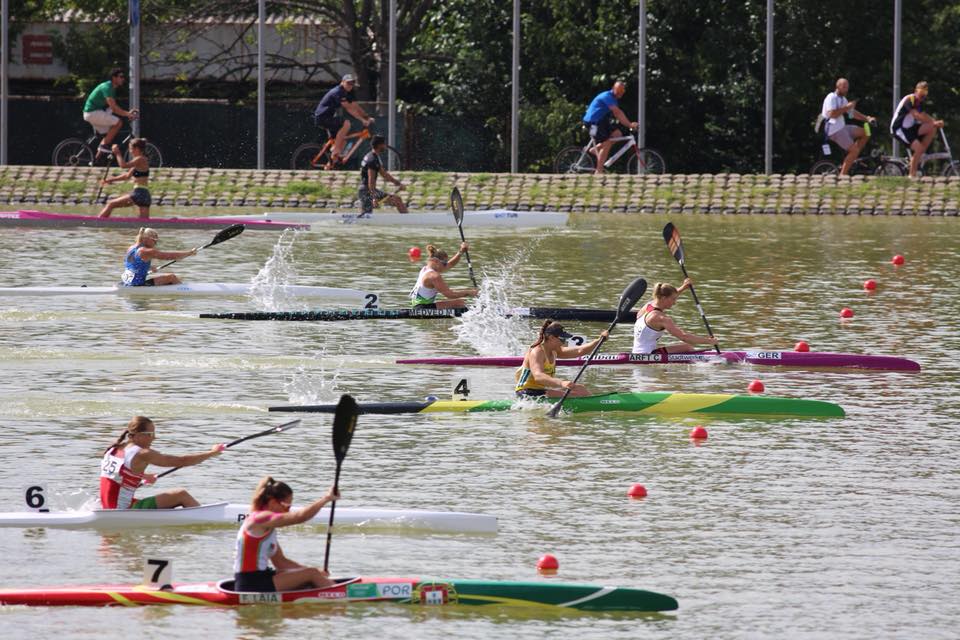 The Australian U23 and junior canoe sprint team have made an impressive start to their World Championships in Plovdiv, Bulgaria, with all athletes competing on the opening day progressing to the next round, and some qualifying straight into the finals.

Among those to impress were Queenslanders Joel McKitterick and Tom Green, who convincingly won their K2 1000 heat to move straight through to the gold medal race.

It was a good reward for McKitterick, making a return to the national team after taking two years off to study, and for 19-year old Green, who made his senior team debut this year.

“To come out with a win in the heat is pretty awesome, it gives us a lot of confidence for the final tomorrow,” McKitterick said. “It was good through that last 500, when we sort of knew that we had it but kept on pushing and pushing.

Green said it was a good build-up for the U23 Worlds.

“I was at the hotel on my first senior World Cup, and I didn’t want to leave the hotel – that’s how nervous I was,” Green said. “It helps with the confidence to have raced against the best in the world.”

Simon McTavish (NSW) was another to win his heat, easing down in the closing stages of his K1 1000 heat, but still winning comfortably and moving into the semi-final.

McTavish has also had experience on the senior team.

“I’ll be stoked if I can get a medal,” McTavish said. “I’m really happy to have put down a good race, and now hopefully carry that momentum into my semi and into the final.

“It’s a bit of a change of environment, everyone is a lot more excited because you have a lot of juniors who are at their first big event, so they bring a lot more energy to the team compared to a senior team which is much more experienced.”

17-year-old Alicia Fay (QLD) is one of several Australians competing at their first World Championships, and said she was thrilled to make it through to K1 1000 junior semi-final.

“It’s pretty amazing to represent my country this young,” she said.

“Not a lot of people get to do it, it’s a big achievement. It’s very hard, a big step-up from nationals. I was very nervous. It’s really hard to calm your nerves, you just have to focus on what you came here for.”

The U23 K4 500 women’s team of Yale Steinepreis (WA), Brianna Massie (QLD), Keily Dober (NSW) and Shannon Reynolds WA) are also through to the semi-finals.

It was a big moment for Dober, also competing on her first Australian team.

“I feel really lucky to be able to race alongside these girls,” Dober said. “It’s a team of such experienced girls, they’ve been doing it for such a long time so I have a lot to learn from them.

“I was nervous, but I tried to channel it into excitement. Being in a team boat it’s so much easier doing a first race, so to get the nerves out, I think we can definitely improve.”

Josie Bulmer (SA) comes into the U23 World Championships after a solid senior World Cup season, and showed the benefit with a strong performance in her C1 200 heat.

“There’s still heaps of really strong competitors at the U23 level, but it’s good to see where I stand in my own age group,” Bulmer said. “I’m aiming for PB’s this week, that will be my best outcome. And hopefully that will get me into an A final.”