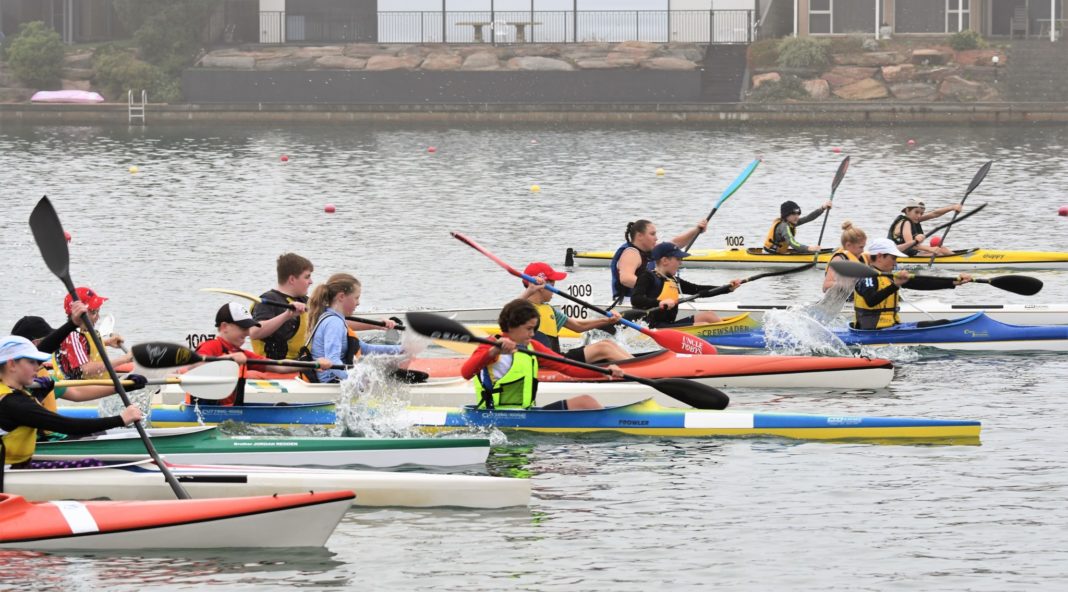 With a record entry field of 384 entries the race committee had their hands full with the smooth operation of the event, which was deemed a huge success.

In perfect conditions the Open events attracted special attention with the event a selection event for the 2018 ICF Canoe Marathon World Championships. Also, The ACMRTC added a non portage class for the first time which saw an increase in Master female participation at the Championships. Spectators and competitors alike saw some exciting finishes with both the Open Men K1 and K2 being decided from the last portage to the finish.  South Australian local Glenn Rypp took home the win in the Open Men’s K1 30km in a tight finish in a time of 2:14:47.5 and only two seconds ahead of last year’s winner Josh Kippin (WA), who finished second in 2:14:49.3.  Jeremy Cotter (QLD) finished third.

The men’s K2 30km was equally tight with South Australian combination of Koyo Niokio and Glenn Rypp winning the event in 2:10:30.2 and with Josh Kippin and Logan Duttan only +0:29.8 behind.  Casey Haynes and Michael Baker finished third.

In the Open Women K1 Tegan Fraser (QLD) established a very commanding lead after the first lap and kept expanding the lead over subsequent laps to take home the win over the 26.25km in a time of 2:10:51.5 and +11:53.3 ahead of second ranked Megan Shaw from Victoria.  Sam Pilton (WA) finished third.  Victorians Isabel Neilson and Rebecca Mann won the women’s K2 26.25km, while Reka Abraham (VIC) won the women’s C1.

The U18 men’s K1 22.5km was won by Victorian Seamus Spanner, ahead of Luke Dooley from Western Australia in second and Sean Jones (VIC) in third.

The U18 women’s K1 18.75 km podium was a Victorian affair with Hannah Scott (VIC) winning the event ahead of Brianna Jones (VIC) and Rachel de Kretser (VIC) in third.

Matthew Dunbar (NSW/ACT) and Ellie Johnson (VIC) took home the Coulthart Trophy for best-performed Under 16 Male and Under 16 Female paddler.  Matthew Dunbar won both the U16 men’s K1 15km as well as the K2 15km together with partner Mitchell O’Loughlin.  Ellie Johnson won the U16 K2 15km with Hannah Lund and went on to finish second in the K1 15km behind Chelsea Beale (SA).

Touring and Recreation Trophy for the State with the highest point score across all touring class and recreational class classes e.g. Rec and Ski’s went to Western Australia with 18 points and only one point ahead of New South Wales and South Australia with equal points (17). Victoria was ranked fourth (12) and Queensland fifth (10).

The Graham Halford Challenge Trophy was awarded to Victoria.

Wrapping up a successful event, a special presentation was made to the Organising Committee from Paddle South Australia for organising the venue and hosting the championships.

The National Championships were also a selection event for the 2018 ICF Canoe Marathon World Championships to be held in Prado Vile Verde, Portugal from 3 to 9 September 2018 with the team to be announced later this week.