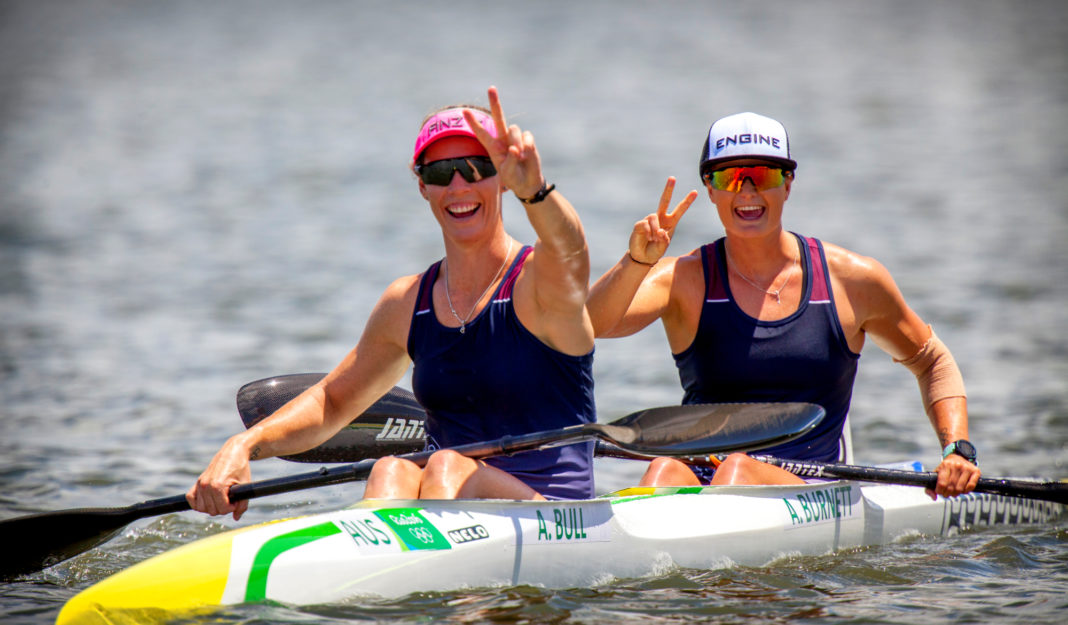 Following selection trials (4-5 March) and racing at the selection relevant National Sprint Championships (6-10 March 2018) at Sydney International Regatta Centre in Penrith last week, they were named on the 15-strong squad to contest the 2018 ICF Canoe Sprint World Cup series as well as the ICF Canoe Sprint World Championships. Also officially named on Monday (12 March 2018) were the four paddlers strong Paracanoe squad, including Paralympic gold medallist Curtis McGrath (QLD) as well as the 2018 U23 and Junior Teams.

Sunshine Coast’s Alyce Burnett will be leading the Senior women’s group after a dominant performance at both the selection regatta and the National Sprint Championships. The 25-year old won all three women events (WK2 500, WK1 500 and WK1 200) at selections and took home the national title in the women’s K1 500 and K1 200. Together with fellow Sunshine Coast and Rio 2016 K2 teammate Alyssa Bull (QLD), Burnett won the K2 500 at both events with the pair taking home their third consecutive national K2 title.

“This season has been a massive step for the girls in Australia. A couple of the girls have now moved to the Gold Coast to the National Centre of Excellence and almost every day in our training environment we are pushing each other. It’s almost a national race each day and we’re improving from that,” Alyce Burnett said about this year’s women’s squad.

“Next year we obviously have to qualify boats for Tokyo so this season will be a bit of trial run. It’s yet to be decided what boats we will race in, but come Worlds and next year for Olympic selections, I hope we can have a really good K4 on the water. I think we have the right girls around to do it; we’ll just have to create the right combination. I got a taste of winning a gold medal last year and we want to push that into an Olympic event rather than a non-olympic event,” the 2017 World Champion in the women’s K1 1000m added looking at the season ahead.

Burnett’s 22-year old K2 partner Alyssa Bull also secured her spot on the Senior Team, plus will be part of the U23 Team to contest the ICF Canoe Sprint U23 World Championships in Plovdiv, Bulgaria at the end of July. Like Burnett she is also convinced of the growing strength of the women’s squad training at the Gold Coast under the guidance of dual Olympic medallist Anna Wood.

“There are quite a few of us training out of Pizzey Park, which is great. Every day we are training hard and pushing each other, which is pushing everybody’s standard up. We’re working hard to get the best results we can and are looking forward to kicking off the international season with the World Cup trip soon and then press on and race really fast at Worlds – both of them (U23 and Open).”

The 2018 Senior women’s kayak squad is completed by Olympian Jo Brigden-Jones (NSW), Cat McArthur (VIC) and Jaime Roberts (WA). South Australian Josephine Bulmer will join the squad in the C1 with the women canoeing events added to the Olympic program for 2020.

In the men’s squad young guns Riley Fitzsimmons (21) and Jordan Wood (23) will be leading the charge after a strong performance and winning the 500 and 1000 events at both the selection regatta and nationals.

“The K2 I’ve been paddling with Jordan Wood has been getting better with every race and we are looking forward to gain some more racing experience overseas and hopefully get a few podiums. And if we’re lucky enough we might be able to race that boat at the World Champs and do something special over there,” Riley Fitzsimmons said.

With the Olympic Games in Tokyo 2020 in mind he added: “My focus and priority at the moment is the K2 1000 with Jordan and I’d really love to race that boat over in Tokyo in 2020. We’re now on this journey to that dream goal. But if something came up in the K4 500 I’d happily put my hand up for that boat as well. It’s a new and exciting race with a lot of countries interested and hotly contested so I would be very keen to race that event. But at the moment the K2 is moving along nicely and that’s the priority.”

“Tokyo 2020 is the end goal. We’ve got so much more to give and we just want to keep building through to Tokyo, that’s the long term goal,” K2 partner Jordan Wood added.

Wallace and Stewart will be the Olympic “veterans” on the team after a mixed series of results for Ken Wallace, who juggled some medical challenges during the selection regatta and consequently missed the Nationals. Murray Stewart underlined he is still a force to be reckoned with after winning both the K1 1000 and 500 at selections as well as his fourth consecutive National title in the K1 1000 at nationals.

It is the mix of Olympic veterans and up and coming talent that makes the team as strong as it is, Jordan Wood explains: “We’ve got a great team. We’ve got some of the older veterans, who are a wealth of knowledge and we got a whole heap of young guys coming through like Tom Green. He’s 18 and paddling really well and gives us a good run for our money so we’ve got a good team and it puts us in a good spot leading into Tokyo.”

Tom Green (QLD) is the newcomer of the season and was not only selected on his first ever Senior team, but will also represent Australia at the U23 World Championships.

Joining the “veterans” on the team will be dual Olympian Steve Bird (WA), who dominated the K1 200 at selections and backed-up at nationals with setting a course record and winning the national title.

“My preparation for the selections was fantastic and I couldn’t have done anything more to put myself in the best position. Ultimately though my preparations are geared towards the World Championships in August,” Steve Bird said. And about the team he added. “We are a really nice racing group in the 200m and we respect each other very much. I’s a nice space to be involved in and we all support each other really well.”

“The selected team is a great mix of experience and young talent. I’m really excited to see the likes of Simon McTavish and Tom Green step up this season and secure their spots onto the Senior Squad. It’s great to see some of our more experienced competitors respond to the challenge from the youngsters and demonstrate they are continuing to improve,” Australian Canoeing’s National Performance Director Shaun Stephens said.

“2018 is a big year for the team ahead of Olympic and Paralympic Qualification in 2019. Athletes are responding well and there is a real sense of purpose amongst the group. The athletes will now have a brief break before the senior team head into a training camp in ten days time.”

“We have a bit of a smaller squad in Australia this time but it’s a great team. The goals this season is definitely to go over to Europe and defend the World title I managed to get last year, which will be first and foremost. But also going over there and doing a PB would be a good achievement for myself,” McGrath said about the tasks at hand. “The competition in paracanoeing has been on the rise. The inclusion of the V1 and a couple of classes will make the sport even bigger and more attractive to a number of different people. It’s ever growing and getting more and more inclusive which is really great,” McGrath added.

“After the debut in Rio at the Paralympic Games, I think the sport has gotten a lot more interest and a lot more participation worldwide. And there’s definitely been a big step up in competition. It’s looking really exciting for the future and onwards to Tokyo 2020 where we will have even more races, which is exciting,” Susan Seipel agreed.

“I can see it my event the KL3. The event has been around for 10 years now internationally and it’s just been getting better every year. I’m hoping to be at the top in Tokyo but it will be a fast race,” Dylan Littlehales added.

The selected Olympic and Paralympic sprint squads will kick-off the European sprint season at the ICF Canoe Sprint World Cup in Szeged, Hungary (18-20 May 2018). The 2018 ICF Junior and U23 World Championships will be in Plovdiv, Bulgaria at the end of July (26-29 July) with the 2018 ICF Canoe Sprint World Championships in Portugal at the end of August wrapping up the international canoe sprint season.