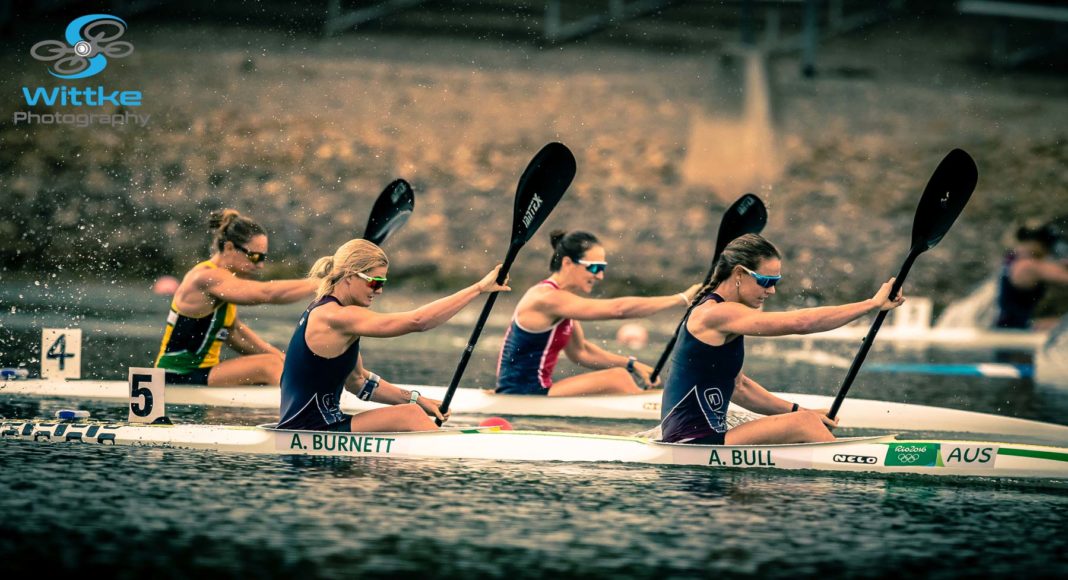 Australia’s Olympic and Paralympic sprint paddlers have presented themselves in great form at the 2018 Oceania Championships Grand Prix 2, which wrapped up at Sydney International Regatta Centre on Sunday, 11 February 2018.

With three weeks to go to National Team Selection Trials the first international hit-out of the season was the opportunity to test some speeds and more importantly secure an invite to the invitational canoe sprint selection trials to take place at Sydney International Regatta Centre (SIRC) March 4-5 2018.

Sunshine Coast’s 2016 Rio Olympic pairing of Alyce Burnett and Alyssa Bull impressed over the weekend by leading the women’s field across the classes in high-calibre racing and with large entry numbers in most of the women’s events.

“The other girls are pushing us hard and it’s never an easy win, but it’s always good to come home with a couple of wins. The girls in Australia have done a huge step up so you certainly can’t be complacent. We’ve had some fast racing over the weekend and we’re looking forward to seeing what we can do at selection trials next and then on the international stage. With the international season in mind, we are trying not to totally peak for this event or selection trials but that aside we are producing some really good times in training as well,” Alyce Burnett said.

While the Oceania Grand Prix is important for selections, Burnett also has the long-term international goals in mind with current crew partner Alyssa Bull and a strong squad of Australian women’s paddlers around her.

“Short term goal is obviously to win all the races at selection trials. But leading into the World Cups and World Champs it will also depend on what boats I’m racing. Now that I got a taste of winning a gold medal last year and singing the national anthem, we want to push that into an Olympic event rather than a non-olympic event.”

“We’ll start playing all of our cards post selections, pending we are selected and into World Cups and World Champs we can try a few things and hopefully we can get those extra one or two percent. But for the domestic season our times are going really well and are very consistent across the whole girls squad,” she added.

New on the Olympic program in Tokyo 2020 will be the women’s canoeing 200m and 500m events with South Australia’s paddlers taking the lead in these events.

“I’ve had some really good times this weekend, which is a good indication in the lead up to nationals. The competition has been really good and all the girls are improving everyday. The goal is to cut as much time off between now and nationals, and hopefully get a few PB’s at nationals and continue to cut the time down to hopefully make the team then,” Josephine Bulmer (SA), winner of the women’s C1 500 and 200, said.

In the men’s events Olympians and 2017 World Champions in the K4 Riley Fitzsimmons (NSW) and Jordan Wood (QLD) presented themselves in great form throughout the weekend and led the field in the men’s K2 events. The pair kicked-off the final day on Sunday (11 February) by winning the men’s K2 500, after already winning the K2 1000 on Saturday (10 February).

Together with their 2017 World Champion teammates and Olympic medallists Kenny Wallace (QLD) and Murray Stewart (NSW), who finished second in both the K2 1000 and 500, they also took home the win in the men’s K4 500 to wrap up a successful event ahead of selection trials.

“It’s been a good regatta and the conditions have been really good, either glassy conditions or just a puff here and there and that’s what you want. We had good results in the K2 1000 and 500 and I’m quite happy with that. It’s been a hard field and there’s been a massive jump up in the speed for everyone and I’m sure it will still improve leading into selection trials and nationals. It’s always good to get a couple of wins in and we want to build on that for our next racing at selection trials,” Gold Coast’s Jordan Wood said after racing.

2012 Olympic gold medallist Murray Stewart also added a win in the MK1 1000 on Saturday, while dual Olympian Steve Bird (WA) had the comeback of the regatta, when he won the men’s K1 200 on Saturday in his first regatta back since his one-year post-Olympics break.

“It’s my first year back and it’s interesting to be back racing others. I’m happy to get these races out of the way, get a win in and build towards selections in three weeks,” the 29-year old said after his win on Saturday.

Newcomer of the weekend was Tom Green (QLD). The 18-year old paddler from Varsity Lakes at the Gold Coast secured is open selection trials invite after finishing fifth in the men’s K1 1000m, as well as fourth in the men’s K2 500 Final together with fellow Queenslander Joel McKitterick. He also won his semifinal in the men’s K1 500, before the final was called a non-event after a technical issue with the start process, which deemed a non-result. Green wrapped up a successful weekend with a second place in the men’s K4 500 together with Joel McKitterick (QLD), Matt Goble (SA) and Steve Bird (WA).

“The competition has been some of the worlds best and competing alongside the Opens the weekend has been a great experience for me. It’s great to try and pass them and to keep up with all these experienced paddlers. It’s all been a great experience, training with the Senior Team. They teach me so much mentally and physically and they are helping me progress. I’ve set a lot of goals with times and I’m ticking them off slowly and just keep trying to progress, but my big goal, and it would be an absolute honour, is to make the Senior Team,” Green said at the end of the regatta.

“Preparations have been going well and this regatta was a good test to see where I’m at,” Curtis McGrath said. “The goal this year is definitely to defend my World titles. But we are still a fair way out from World Champs and even our Nationals are still a couple weeks away. I’m looking forward to another opportunity of racing and getting Dylan (Littlehales) there,” McGrath added after he was pipped on the line by fellow Paralympian and Australian Canoeing 2017 Junior Athlete of the Year Dylan Littlehales (NSW) in the men’s K1 200m on Saturday. See Saturday’s media release for more: http://canoe.org.au/2018/02/10/rio-2016-olympians-and-paralympians-show-early-form-at-2018-oceania-championships-grand-prix-2/

The 2018 Oceanian Championships Grand Prix2 was the first international hit-out of the 2018 season with 148 athletes competing in 89 events across the Olympic and Paralympic sprint classes and Open, under 18 and under 16 age groups. International entries included competitors from France, South Africa, Denmark, Great Britain and Tahiti as well as New Zealand’s U18 Team, who enjoyed their stay in Sydney.

“We all love it here. We don’t have a regatta course like this back home in New Zealand. The starting gates are really good, we had good conditions and it’s cool to get some official timing so we know how we’re tracking on our program. The racing was really good with high competition and the girls were pushing me really hard, so it was good fun. I’m hoping to go on to Junior Worlds and racing a few events there for New Zealand,” Alicia Hoskin (NZL) said, who won the women’s K1 500m as well as K4 500 Under 18 events and finished fourth with here New Zealand crew in the open women’s K4 500.

SIRC will be hosting the Australian Canoeing National Selection Trials next from 4-5 March 2018, before the National Championships to take place from 6 – 10 March 2018.

Before then, the Australian Canoeing action continues with the Slalom Team contesting the Australian Open at Penrith Whitewater Stadium next weekend, 16 – 18 February 2017. The event will see local hero and Olympic medallist Jessica Fox in action as well as a high calibre international field including multiple Olympic and World Champion medallists from around the World. For more about the entries and event program see here: http://canoe.org.au/events/2018-canoe-slalom-australian-open/